Tamukeyama is a weeping Japanese maple that reaches up to 6-7 feet tall and 10 wide. It has very beautiful dissected dark red leaves and can grow in USDA hardiness zones 5 through 8. 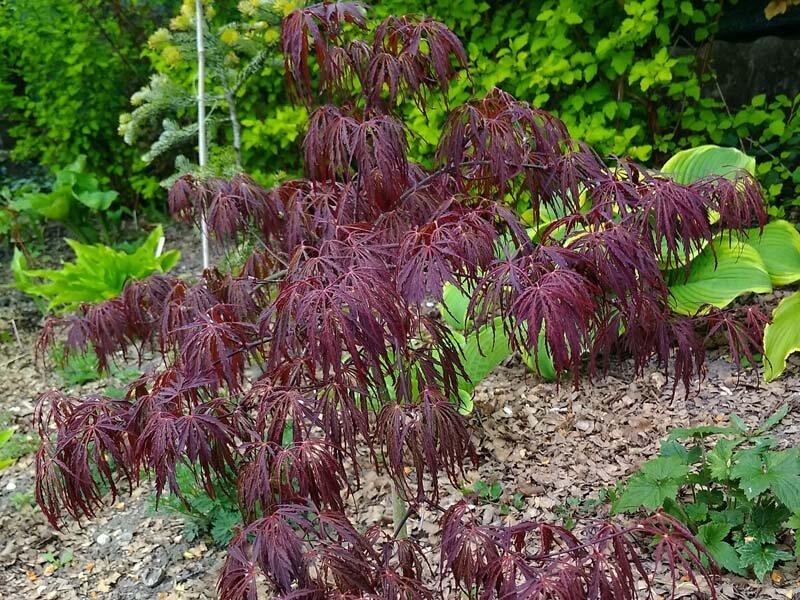 The best place to plant Tamukeyama is where there is no stagnant water and the soil drains quickly. It should also be planted in direct sunlight for at least a few hours a day.

Dig a planting hole twice the size of the root ball. Place the maple in the hole so that the trunk is not covered with soil, if necessary, sprinkle some soil on the bottom of the hole. Fill all the empty space in the hole with soil and water the maple.

If you choose sunny and hot weather for planting, shade the maple for a few weeks. You can do this using a garden umbrella or netting.

The best soil for Tamukeyama Maple is a loose substrate with lots of nutritious organic matter. The substrate should also have good drainability. Otherwise, the maple roots may start to rot.

If you have clay soil in your yard, add a few buckets of quality compost to the planting hole and mix it with the native soil. The result will be a nutritious substrate with no water stagnating in it. The same applies to sandy soil, the compost will make it more nutritious and slightly more water-holding.

Also make sure your soil has a pH of 5.7-7.0, which means the soil should be slightly acidic. If the soil is too alkaline (pH > 7.0), the plant will not be able to extract the necessary minerals from it, and the leaves will turn yellow.

To make the soil more acidic, use special acidifiers (sulfates) that are available at garden stores. On the other hand, soil that is too acidic (pH less than 5.5) can also have a negative effect. Use garden lime to raise the pH.

Tamukeyama Maple should be watered as often as the topsoil is 2 inches dry. For a newly planted maple, it is best not to let the ground dry more than an inch, but once the tree is established (after one year), then water less and let the ground dry 2 inches between waterings.

Too much watering can lead to overwatering. This will cause the roots to rot and the maple leaves to turn yellow. Root rot in trees is difficult to fix because replanting and removing rotten roots will only make the problem worse.

If your maple has rotten roots, eliminate the cause of the overwatering and provide additional shade. When you see that the maple is recovering, remove the shade.

On the other hand, do not underwater a maple because the leaves may curl and turn brown starting at the tips or edges. It is a good practice to prevent the soil from drying out quickly by mulching. In early spring, mulch the surface around the maple with 1-2 inches of compost. Avoid covering the maple trunk with mulch; there should be a 1-inch gap.

Tamukeyama is one of the most sun-tolerant Japanese maples. It can be grown in full sun almost anywhere. Only in zone 8 it needs shade in the afternoon otherwise the leaves can get sunburn. At the same time, almost all Japanese maples need partial shade in any climate.

It is best to plant Tamukeyama in a location with 6 to 8 hours of direct sunlight in the morning, and in full or partial shade the rest of the time.

You also need to avoid planting this variety in full shade. Otherwise, the leaves will have a greenish-red color. Also, the number of leaves and branches will be smaller. In general, in full shade, the maple will develop poorly and will die sooner or later. 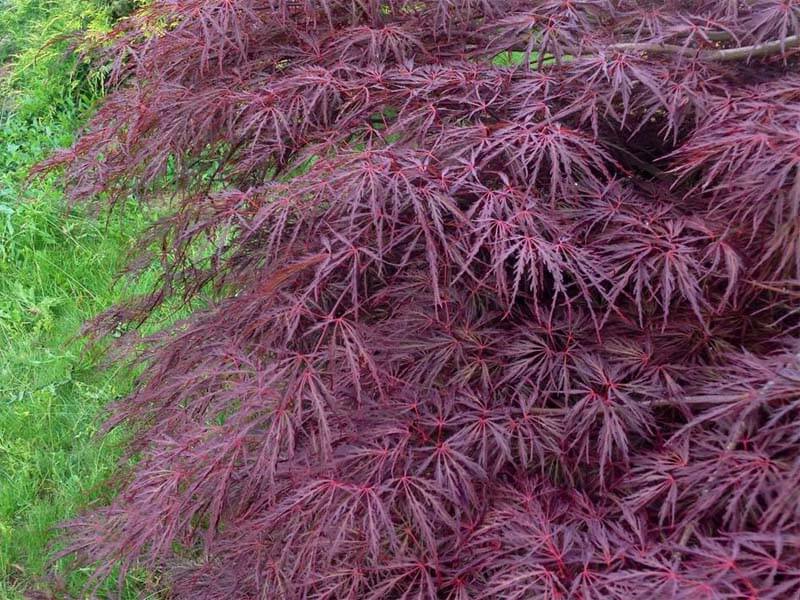 The best fertilizer for Tamukeyama is a universal balanced slow-release fertilizer. Apply it once a year in early spring. Avoid fertilizing in early summer as this can cause new leaves to grow vigorously and become green, resulting in no red color.

With other types of fertilizer, it is possible to reapply in the second half of summer. But do not fertilize too often because the plant can become exhausted from the overgrowth or it can get its roots burnt by too much salt. Also, avoid fertilizing over the winter as this can lead to young shoots which will certainly be damaged by frost.

Sometimes Tamukeyama leaves can be damaged by various fungal diseases. As a result, brown or black spots may appear on the leaves as well as small holes.

To avoid all this, ensure good air movement around the maple, which means do not plant it close to buildings or other plants. If there are spots on the leaves, spray the maple with a fungicide containing copper.

Also, some insects or mites can damage Tamukeyama. Symptoms are curling or yellowing of the leaves. If you notice something wrong with the leaves, examine them carefully. If you see insects, spray the maples with an aqueous solution of horticultural oil.

If the insects are very small and you can see fine cobwebs on the leaves, it is most likely mites. To get rid of the mites you need to spray the maple with a special product called acaricide. 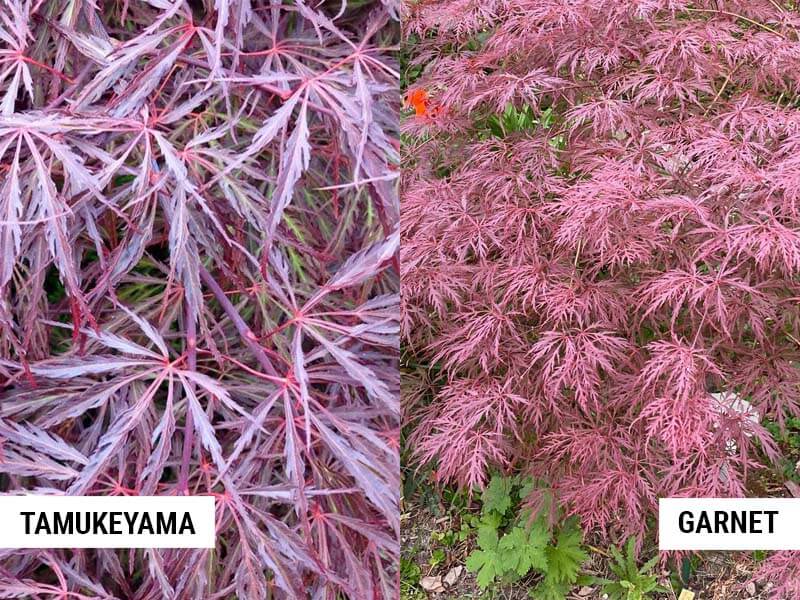 The main difference between Japanese Maple Tamukeyama and Japanese Maple Garnet is the color of the leaves. Tamukeyama has reddish-burgundy very dark leaves that turn red-brown over time. Garnet, on the other hand, has crimson-red leaves which are very bright at the beginning of the season but later turn darker.

In other respects, these maples are very similar. They have deeply dissected leaves that look very ornamental. The crown shape of both varieties is umbrella-shaped and weeping. They tolerate full sun as well as partial shade. 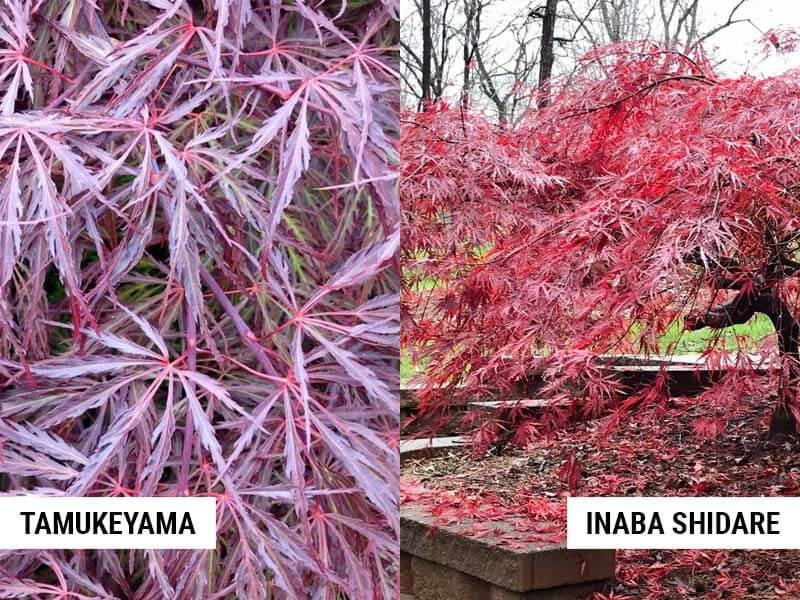 Inaba Shidare also has a slightly better tolerance to hot climates and is recommended to grow in zone 9. Tamukeyama grows well in zone 8, but maybe uncomfortable in zone 9.

Both varieties have similar maintenance requirements. They have a weeping growth habit and compact size, so they are ideal for small gardens. 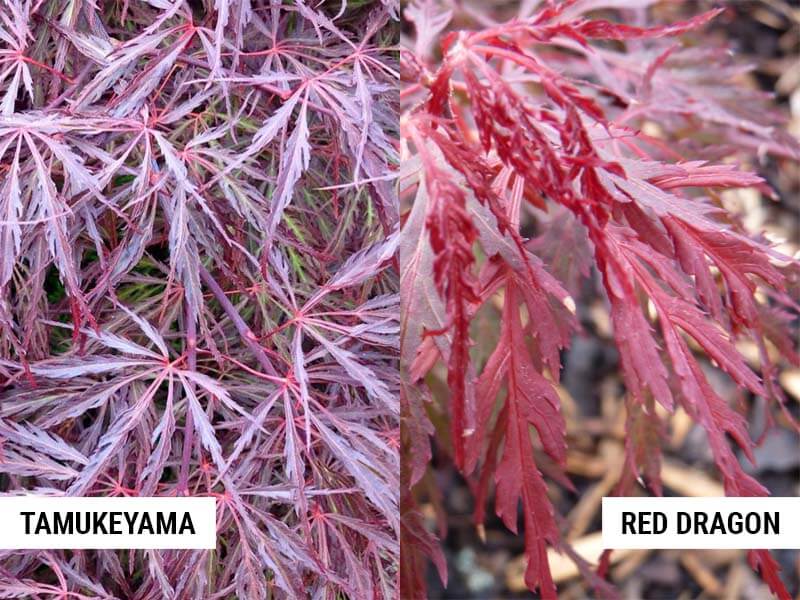 The most notable feature that distinguishes Red Dragon Japanese Maple from Tamukeyama Japanese Maple is its ability to hold color. Tamukeyama has a bright burgundy color in the spring that fades in the summer and then turns a bit brownish. Red Dragon also has reddish-burgundy leaves in the beginning, but the color lasts most of the summer until fall.

The second difference is that Red Dragon is more globular and can reach 8-10 feet in both width and height. Tamukeyama on the other hand is more umbrella-shaped, usually 10 feet wide and 7 feet high.

Both maples can grow in USDA hardiness zones 5 through 8 and tolerate planting in the full sun well. Do not require pruning and have a weeping growth habit. Their compact size allows them to grow in a very small area or even in a container. 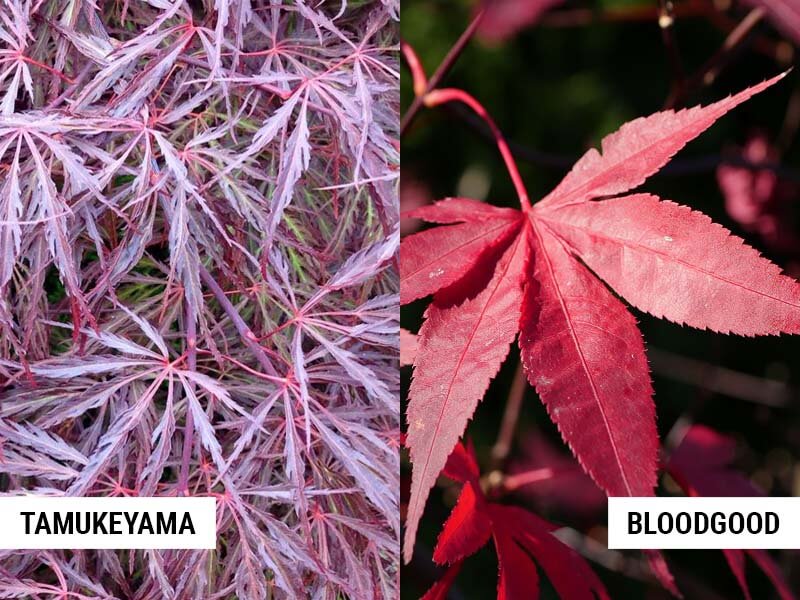 The leaves are the most noticeable feature that distinguishes Japanese Maple Bloodgood from Tamukeyama Japanese Maple. Bloodgood has larger leaves which are divided into 5-7 lobes, but the lobes themselves do not have dissections. Tamukeyama, on the other hand, has additional slits in the lobes, which makes it more ornamental in appearance.

In addition, Tamukeyama has smaller burgundy-colored leaves. The leaves of Bloodgood are larger and dark red in color.

The growth habit of both maples is different. While the Tamukeyama is a weeping maple, the Bloodgood has a regular branch structure that spreads vertically or horizontally but not downward.