Bloodgood and Emperor 1 are two Japanese red maples that are no different at first glance, but is it really so? And if there is a difference, which one should you prefer? Let’s deal with this.

The main difference between Japanese Maple Bloodgood and Japanese Maple Emperor is size. Bloodgood can reach up to 25 feet in height and width, while Emperor sizes usually do not exceed 20 feet. In addition, Emperor tolerates hot climates better and the red color of its leaves lasts longer.

Acer palmatum var. atropurpureum ‘Bloodgood’ first appeared more than 80 years ago. It got its name from the eponymous nursery located in Long Island, New York. At that time, it was a unique variety that had no equal.

Over the years, it has become a leader among red Japanese maples, and even now, few varieties can surpass it. For this reason, people often compare all similar maples to Bloodgood.

Acer palmatum ‘Wolff’ is another name for Japanese Maple Emperor One. This variety is bred in Pennsylvania, the name of its originator – Richard Wolff.

After its appearance, Emperor became a serious competitor for Bloodgood due to its decorative characteristics, which in some respects even surpass the latter. 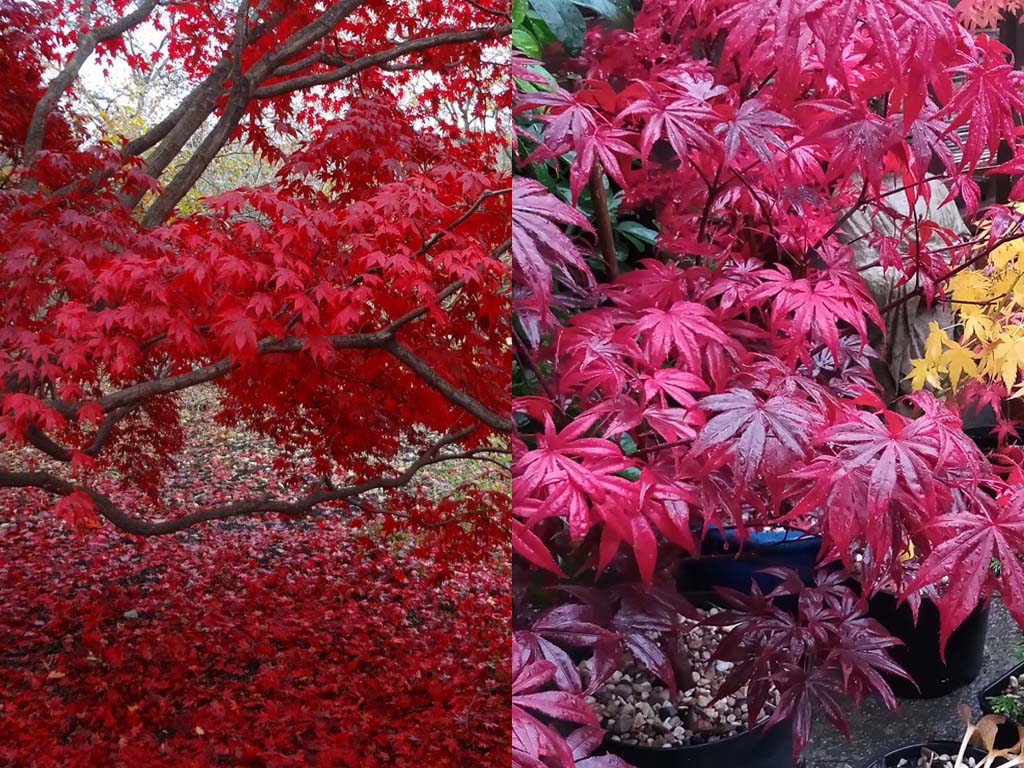 The Emperor One is slightly hardier than Bloodgood

The first difference is that the Emperor is a little more resistant to low and high temperatures than Bloodgood.

Emperor can be grown in hardiness zones 5-9, while Bloodgood is not recommended to grow in zone 9 because it will be too hot there.

In the spring, the Emperor comes out of dormancy a little later than his counterpart. This feature allows him to tolerate late frosts.

For example, for zone 5, late frosts can occur until May 15. If by this time, Bloodgood has begun to unfold the leaves, the frost will damage it.

At the same time, the Emperor will begin to form foliage 14 days later. This will avoid frost damage as closed buds tolerate low temperatures better.

In terms of frost resistance, Emperor is better, so if you live in the north of the United States, then you better prefer this variety.

The size and growth rate aren’t the same

Emperor has a slightly faster growth rate, especially in the first years after it takes root in a new place. However, over time, when plants become mature, the growth rate decreases. As a result, this variety reaches 15-20 feet (4.5-6 m) in height and slightly less in width.

Bloodgood grows more slowly but reaches a slightly larger size. The average size of these plants is 20-25 feet (6-7m). The difference is not significant, and the size depends on the growing conditions. Under more favorable conditions, the Emperor may be larger than Bloodgood.

If you need to fill a vacant space in the garden, then you should definitely choose Emperor.

Whatever variety you prefer, keep in mind that these are large enough plants, and you need to allocate space for them accordingly. Do not plant them closer than 10-15 feet to the house or other buildings.

If you are looking for more compact maples, then you should pay attention to the smaller varieties. A great alternative would be Shaina Japanese Maple. It also has red leaves and an average height of 5 feet (1.5) and a width of 3.5 feet (1 m).

You can also reduce the size of the Emperor and Bloodgood by pruning. However, they cannot be shortened too much; they still need space to expand. A small pruning each year will allow you to get a little thicker and more compact maples, but they will not be less than 15 feet tall.

The color of Emperor 1 leaves retains longer and better

Bloodgood and Emperor have almost the same leaf color. The Emperor is more ruby, and the Bloodgood is more burgundy. However, in general, the color is difficult to distinguish.

Many factors affect the color intensity of Japanese maples. One of them is the amount of sun.

With a lack of sun, Bloodgood will have a green tint of leaves. This is especially true of the lower leaves because the upper ones shade it.

Emperor leaves hold color better; even in the partial shade, they will be bright enough. So here is the advantage on the Emperor’s side.

The second case when the leaves may not have color is an excess of sun. In hot climates, sometimes the sun is too much, and the leaves become pale. As a result, it does not have the desired pigment intensity.

Here’s a victory for Emperor One as well. It is very resistant to sunlight and retains color better in summer than Bloodgood. However, I must say that among the Japanese maples, there are varieties that retain color even better than these two.

Another advantage of the Emperor is that its leaves are thinner. As a result, this variety looks more beautiful, especially in the sun.

What is similar between them?

In addition to differences, they also have similar features.

First of all, maples prefer slightly acidic soil. It will also be useful if the soil is drained, and there is no stagnant water. You can improve the soil by adding organic matter.

Plant maples only in spring or autumn. These are the two most appropriate periods. Summer is not the best time to plant maples because, at this time, the weather is too sunny and dry; as a result, the plant may not survive.

The planting hole should be twice the size of the root ball. Do not bury the trunk in the ground. The place where the roots connect to the trunk should be half an inch above ground level.

After planting, water the plant well; in the first year, the maple should not be deficient in moisture. Water the tree when the soil is more than half an inch dry.

The landing place should be sunny. In hot climates, the maple will benefit from partial shading (morning sun and afternoon shade).

It is also important to mulch the surface around the maple. This is necessary so that the soil does not dry out and does not overheat in the summer. In winter, the plants will also be more comfortable if their roots are covered with mulch.

The best mulch is compost. In addition to its primary function, it will add nutrients to the soil. The thickness of the mulch layer should be 2-3 inches. Keep the mulch 1-2 inches away from the trunk.

In addition to organic compost fertilization, slow-release mineral fertilizers should be added once a year. As a result, your maple will get enough energy for good growth.

Do not forget that Japanese maples, like all plants, have diseases and pests. Various insects can damage maples, so you should spray your trees 2-3 times a year with pesticides or Neem Oil.

The same applies to diseases. It would be best if you sprayed the tree with fungicides several times a season to avoid the development of bacteria and fungi.