The beautiful small leaves of the Japanese maple with deeply dissected lobes look fabulous evoking various associations. Thanks to the different colors of the leaves we have many different options. But what could be more unusual? A weeping Japanese maple!

With its unique foliage and weeping shape, you will have one of the most extraordinary plants in your garden. In this article, I have selected for you the 15 best dwarf weeping Japanese maples. I hope this information will help you choose the maple that is perfect for you. 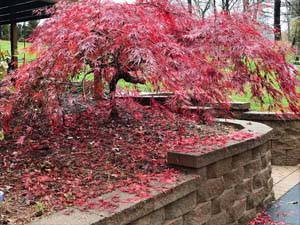 Inaba Shidare is one of the most unique varieties among Japanese maples. Its leaves are divided into 5-7 lobes, but the lobes themselves have many cuts. All this makes the leaves very patterned.

As for color, the young leaves of this maple are bright red. In midsummer, the red color becomes less saturated and shifts to burgundy. Toward the fall, the leaves turn a greenish-red, and in the fall they turn bright red again.

It is a dwarf Japanese maple because it is usually less than 5 feet tall and 6 feet wide. Over time, this maple will form a mushroom-shaped crown and the young branches will sag to the ground under the weight of the leaves.

Inaba Shidare is a very hardy maple. It grows well from zone 5 to 9. And easily tolerates planting in full sun. Also grows well in containers. 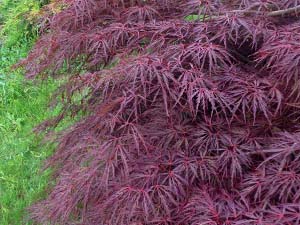 Tamukeyama is a dwarf variety of Japanese selection. It has very lacy leaves. Each lobe is very long, it has one of the longest lobes among Japanese maples. Because of this, the leaves are also very drooping, which enhances the weeping effect.

The height of this variety after 10 years is more than 5 feet and the width is 7 feet. The crown is umbrella-shaped, with branches cascading to the ground. The number of leaves is enormous, so this maple is very dense, and in spring, summer, and fall the thick branches are almost invisible.

The color of the leaves is dark red. Dark leaves are a distinctive feature of this variety. Neither in the spring nor the fall is it bright red. Throughout the season, the color changes from dark red to dark maroon.

Tamukeyama has excellent cold and heat tolerance. It is recommended for growing in zones 5-9. It is the most suitable variety for full sun. 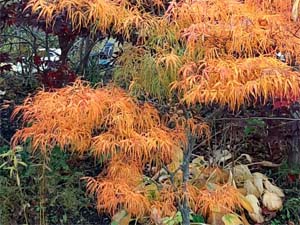 Waterfall is the dwarf weeping green Japanese maple. In spring, when the leaves unfold, their color is light green, the more mature they become, the darker and richer the green color becomes.

Waterfall is also one of the smallest weeping Japanese maples. It is no more than 4 feet tall after a dozen years, but it can reach 6 feet or more in width. Its crown is umbrella-shaped and more regular than the previous two varieties. Over time, the branches will become longer and droop downward.

This maple grows equally well in full sun and semi-shade. It grows best in zones 5 to 8 but is not recommended in zone 9 due to excess sunlight in this climate. 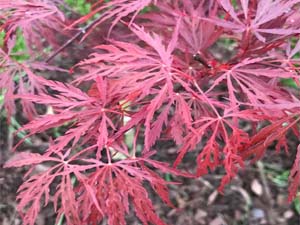 The leaves of this maple are bright red in color and at maturity, the leaves have a slight cherry tint. In autumn, the leaves turn fiery red again.

Because of its size, Red Select can be classified as a dwarf maple. Its height after 10-15 years does not exceed 4-5 feet and its width does not exceed 6-7 feet. Over time, the branches begin to grow sideways and droop toward the ground under the weight of numerous leaves.

It tolerates the climate of zones 5-9 perfectly. It can be planted in full sun or semi-shade. It is easy to grow in the garden as well as in a pot. It does not need a lot of water, but it cannot be called drought tolerant. 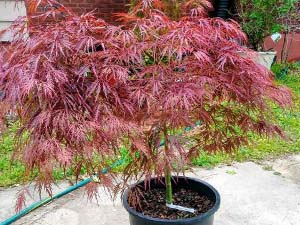 Orangeola is another one of the smallest Japanese maples. It grows up to 5 feet tall and 4 feet wide. It is more pyramidal than umbrella-shaped, which distinguishes it from most of the preceding varieties. As it reaches its maximum height, the branches will curve down toward the ground, creating a weeping effect.

The leaves have very thin lobes and look lacy. The leaves are bright red when young, but become orange over time. The mature leaves are greenish orange in color. Throughout the season, young foliage continues to appear.

The result is that you will always have three colors of foliage on the tree, which is simply gorgeous.

Orangeola is good for growing almost anywhere in the U.S. This variety is recommended for planting in zones 5 to 9. It will tolerate full sun but will need some shade in zone 9. 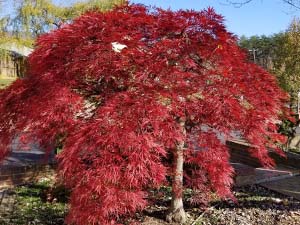 Crimson Queen is a dwarf variety of American selection, bred in a nursery in the state of New Jersey. After 10 years of age, it is usually no more than 4 feet tall and 5-6 feet wide.

From a young age, this tree forms a large number of lateral branches that immediately begin to sag. So if you want a weeping Japanese maple quickly, the Crimson Queen is the best choice.

This variety is available for cultivation in zones 5-9. But it is contraindicated to full sun. The best planting location is the penumbra, as in full sun the leaves can become pale. Crimson Queen is the best maple if you have a lot of shade, but the total shade is not good for it either.

Red Dragon is a very interesting Japanese maple first of all because of its lace leaves, which resemble a dragon silhouette. Their color is burgundy, but the lower part is bright red or almost red-orange. During even a slight breeze, the leaves sway and produce a bicolor effect.

The size of this maple is dwarfed, growing up to 5 feet tall and wide. The multiple leaves and thin young branches give you a weeping effect. You don’t have to prune it because the annual growth isn’t that big.

Like most Japanese maples, this variety can be planted in zones 5-9 in full sun. In zone 9, you will need some shade because too much light will make the leaves lose their color. 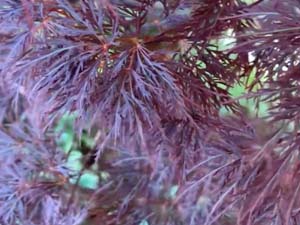 Red Filigree is a Japanese maple of Italian selection. It is a unique variety through its very small and very thin leaves. There are almost no Japanese maple varieties that have the same thin foliage.

As for color, Red Filigree has burgundy foliage and the color almost does not change from spring to fall. What makes this variety so distinctive is that it can grow in deep shade all day long without affecting the color or shape of the leaves.

That is why it can certainly be called the best dwarf weeping Japanese maple for shade.

It is also one of the most miniature Japanese maples. Its height and width usually do not exceed 3-4 feet after 10 years of cultivation. It grows well in zones 5-9 and as I mentioned the best planting location is shade or penumbra. 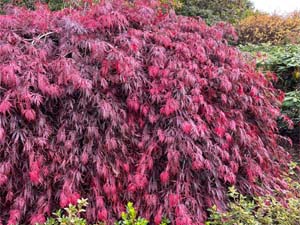 Victoria’s Red Sensation has very bright red young leaves in the spring, hence its name. By July the leaves turn a greenish-brown and in the fall they turn bright red again. This contrast of colors makes this maple more dynamic.

Victoria’s Red Sensation is four feet tall and five feet wide at maturity. It is umbrella-shaped, with branches arranged in a cascade.

The young branches are green in color which looks good with the red young foliage. The weeping begins to show after 5-6 years of cultivation.

It withstands equally well the frosts of zone 5 and the heat of zone 9. The recommended planting place is full sun or semi-shade. 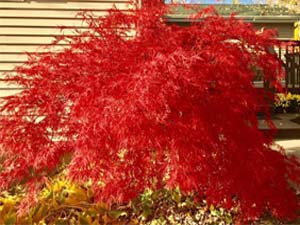 Ever Red is another dwarf weeping Japanese maple. Its peculiarity is its bright red leaves from spring to fall. In midsummer, the foliage turns slightly greenish-red, but overall this maple retains its color well.

At ten years of age, it is 5 feet tall and 6 feet wide. The crown shape is mushroom-shaped and cascading. Does not need pruning. Its compact size makes it ideal for growing in containers.

The excellent hardiness of this maple allows it to be grown in climate zone 5. Well tolerates the heat of zone 8-9. The best place for planting in full sun in the north and partial shade in the south.

In the first year after planting Ever Red needs regular watering, after it has taken root additional watering can be stopped. 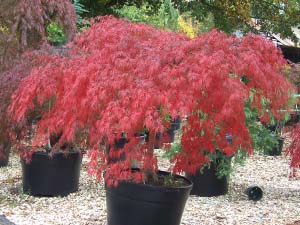 Octopus Japanese Maple has very beautiful red young leaves. The color persists well. In summer, the foliage may be a little pale, but this maple will turn red again in the fall.

Octopus is compact in size. It reaches a height of 4 feet and a width of 6 feet or more. Later it can be twice as wide as it is tall. The crown is broad, umbrella-shaped, with branches falling from it with dissected leaves.

This variety can be grown in zones 5 to 9. In zones 8 and 9, if planted in full sun it may have pale leaves, so in hot climates, a semi-shaded planting is recommended. Also, mulching gives good results as the maple gets enough water to thrive. 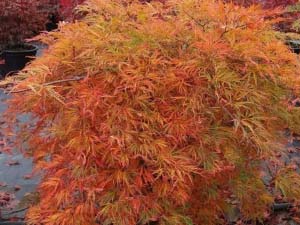 Chika is a beautiful variety bred in Japan. It belongs to the green weeping Japanese maples. The color of the leaves is bright green in spring, becoming a little darker and less bright in summer. But the maple looks the most beautiful in autumn when the leaves are colored in yellow-orange color.

This maple can reach a height of 8 feet and a width of 6 feet. This means it is a semi-dwarf variety, but can still be easily grown in a small garden. If it exceeds the desired size it can easily be controlled by pruning. The only drawback is that it is difficult to grow in a pot.

The frost and heat resistance of Chika is the same as most of the maples on this list. All other care requirements are similar to most Japanese maples. 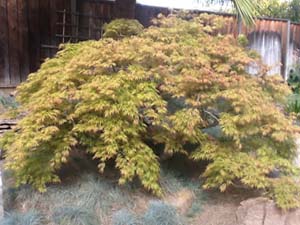 Viridis is another cutleaf Japanese maple. The color of its leaves is light green, but the closer it gets to summer, the more intense the color becomes. In the fall, the leaves first turn yellow, but before they fall, they are already bright orange.

If you plant this maple together with another red Japanese maple, you will get a dynamic change of colors throughout the season.

As for size, it is a dwarf maple because it does not grow taller than 5 feet and is no more than 7 feet wide. The shape of this variety is very broad and it begins to branch out at an early age. It looks best when grafted on a high rootstock, as the weeping is then more pronounced.

Tolerates almost all climates in the U.S. Does not require any different care than most Japanese maples. 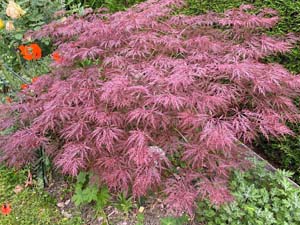 Garnet grows up to 5 feet tall and 6 feet wide. It is a small Japanese maple that is well suited for growing in both a container and a small garden. The growth habit is umbrella-shaped and weeping.

The color of the young leaves is bright red, the more mature the leaves become, the darker the color becomes while. The older leaves are burgundy in color. Like all Japanese maples, Garnet leaves are deeply dissected into several lobes.

Grows well from zone 5 to 9 in the garden. In containers, it does best in zones 6 to 8. It needs some shade in the southern states but grows well in full sun in the north. 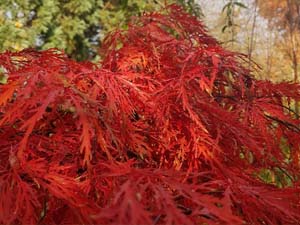 Shojo Shidare is a beautiful weeping maple that comes from Japan. Its peculiarity is very bright red leaves, the color of which holds well throughout the year. The mature leaves are a bit darker but the red is still very vivid.

It is a compact variety, its width is greater than its height. Cascading and weeping are very well expressed. If you are not happy with the size, you can always cut it into shape, as it tolerates pruning very well.

Grows well in both sunny and partial shade. Recommended for cultivation in zones 5-9. Tolerates most soils, but in heavy clay soil, it needs drainage to avoid stagnant water.