This list contains the most interesting small maples with red leaves. There are many more such varieties but these are the most suitable and worth your attention. Beni Kumo No Su is a Japanese maple with extremely dissected leaves. In the place where the leaf is attached to the leaf petiole, the lobes begin. There is no leaf blade as such, but instead, several lobes which are also highly dissected.

As for color, at the beginning of the season, this maple is bright red with a slight burgundy tint. By mid-season, the color darkens and becomes maroon-red. At the end of the season, the leaves turn scarlet which is an indescribable sight.

This variety is very compact. After 10 years, it will be no more than 4 feet tall and 6 feet wide. The crown shape is broad with many side branches.

It is an ideal maple for a miniature garden or rock garden. It is also great for growing in a container. 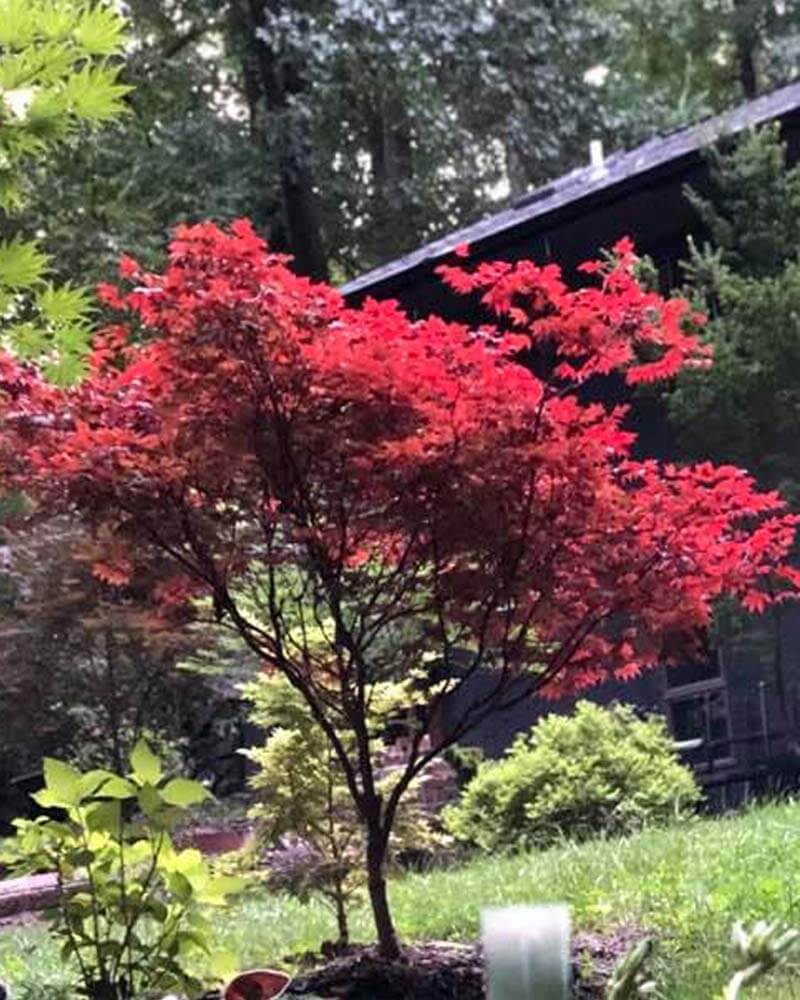 Adrian’s Compact is another small Japanese maple that has leaves in various shades of red throughout the year.

It all starts in spring, at which time the leaves are almost pink in color. In fact, the young delicate foliage looks delightful. In midsummer, the color changes to a darker red or almost burgundy.

But the best part begins in the fall as the foliage turns bright red or scarlet. This is a sight that lasts long enough to be enjoyed.

The size of this maple is really dwarfed. Usually, at ten years of age, it is no more than six feet tall and a half as wide. As a result, it will easily fit even in a small corner of your garden.

Read more: How do you keep a Japanese maple tree thriving? Ever Red really is a tiny maple because, at 10 years of age, it is no more than 4 feet tall and a little more than a foot wide. Thanks to its size, it can be grown anywhere, even if space is scarce. It is also ideal for container growing.

As for the leaves, they are also very interesting. The leaf is usually made up of 6 lobes which are very indented. The lobes are very narrow and start at the base of the leaf.

In spring this variety has a bright red color that darkens in the summer. A greenish tinge may appear on the leaves towards autumn, but after that, the leaves become very bright red with a slight fiery tint. This little Japanese maple has excellent frost resistance. It can be grown from zone 5 to zone 9. This means it is ideal for residents of northern states.

Fireball was obtained as a somatic mutation on another maple. Because of this, it has a dwarf growth habit. At maturity, it reaches about 6 feet tall and up to 4 feet wide. You can also easily control its size by pruning.

The leaves have a very beautiful red color with a cherry hue. The color changes to a darker shade throughout the year, but at the end of the year, it is bright red again.

The leaf is divided into several lobes that are not cut. But nevertheless, the foliage looks delightful because of the narrow and long lobes. Kurenai Jishi is a wonderful dwarf maple that reaches 4 feet tall and 3 feet wide by the age of ten. This small size makes it suitable for both urban and suburban cultivation.

You can also grow it successfully in a container. But it is most often used to decorate stony gardens or in combination with dwarf conifers.

A second advantage is very abundant budding. This results in more leaves on the branches than in other varieties. Kurenai Jishi looks much thicker than other similar maples.

The foliage color is dark red and can have several different shades. The leaf is slightly twisted and divided into five large lobes. Peve Starfish is a unique small maple. Its leaves are divided into six lobes, and the lobes are almost equal in size and arranged quite symmetrically. All this makes the leaf look like a starfish.

The second most important advantage is the color. At the beginning of the growing season, the leaves are red or maroon. In midsummer, the color is usually already red-furple and less bright. At the end, the leaves turn a deep red or scarlet.

This variety can really be called tiny. At ten years of age, it will be about four feet tall and three feet wide. You can hardly find a more compact tree. However, if it seems big to you, you can cut it back a little each year and get an even smaller tree.

Another strong point of this variety is its excellent hardiness. It withstands the frosts of the northern U.S. and the hot climates of the south equally well. Pixie, like most similar varieties, changes color throughout the year. But the hallmark of this maple is a very rich cherry red tint.

The leaves are divided into 5-6 lobes. The cuts are deep but the lobes are not dissected. Nevertheless, the leaf looks beautiful and aggressive because of the very sharp tips.

The size of this maple is not large at all. At maturity, it reaches 6 feet in height and a little less in width. The growth habit is upright and with some number of lateral branches.

A distinctive feature is good tolerance to full sun. It can also be grown in most states (zones 5-9). To say that Red Filigree is unusual is nothing to say. This maple has many unique characteristics that will be briefly described here.

First is the foliage. The leaf of this maple is so finely cut that you can’t tell it’s there at all. If you look at the leaf, you can see a pattern of thin stripes that start at the end of the leaf petiole. The leaf looks so delicate that you have to wonder how it can be.

The second thing is the color. At the start, this maple has a burgundy-red color that holds up very well. No matter where the tree grows, the color will always be bright.

By the way, Red Filigree is one of the maples that grow well in both full sun and partial shade. In addition, it can withstand the low temperatures of zone 5.

This variety is not just a dwarf but a miniature. It grows very slowly and will reach 2 feet tall in 10 years! And the width will be a little more than that.

The branches sag downward, which means it is a weeping maple. It is one of the best for potted cultivation.

Red Select is another Japanese Maple with weeping branches. Its growth habit is like a waterfall with bright leaves instead of water.

After ten years of growth, this tree will be only 5 feet tall while about 7 feet wide. It is compact enough to use in compositions with dwarf conifers and rocks.

The leaf is very much dissected and consists of several lobes. The color is bright red, in the beginning, then darkens and can even take on a greenish hue. At the end of the season, the leaves are bright red again. The leaves are smaller than those of other similar maples.

This variety has excellent cold and heat tolerance. It is available to most gardeners in the U.S. and other countries. It can also be easily grown in a pot. Rhode Island Red is a rather unique Japanese Maple. The first distinctive feature is the relatively larger number of leaves. As a result, the tree looks much thicker than other maples.

The second is the compact size. At maturity, it does not exceed 5 feet in height and 7 feet in width. The shape is spherical with many side branches.

It also has relatively large leaves which will give it even more lushness. The leaves themselves are divided into 5-7 lobes, with the lobes in turn slightly serrated.

At the beginning of the season, the leaves are maroon-red in color. By midsummer, it changes to a very dark, almost purple. In the fall, the leaves turn scarlet before they fall. Shaina was found as a witch’s broom on the Japanese Maple Bloodgood. From its parent, it gets its brightly colored leaves and other family traits, but it is also very small in size.

After ten years in the garden, it will be about 2 feet tall and about the same width. The growth rate is very slow making it suitable for almost any type of cultivation. The crown is upright at a young age but expands over time.

The leaves are deeply dissected and consist of several narrow lobes. The leaf size is slightly smaller than that of the parent plant. The color is bright red in the spring but darkens over time. In fall, the foliage turns bright red with a slight terracotta hue. Inaba Shidare is one of the most popular dwarf Japanese maples. Among other things, it has a weeping effect, which is why it is so prized among lovers of such trees.

At maturity, this maple usually reaches no more than 5 feet tall and about 6-7 feet wide. The young branches bend to the side before they are fully mature and create a wonderful mushroom-shaped crown.

Inaba Shidare can grow well in full sun as well as in semi-shade. To get good leaf color, avoid planting in full shade.