Red Japanese maples with very dissected leaves are just fabulous plants. For this reason, the name of one variety we are considering today is Red Dragon because leaves remind small flying dragons.

Crimson Queen is an older variety, and it was originated more than 60 years ago in New Jersey at a local nursery. Since then, it has become widespread and now can be found in almost every garden center.

Red Dragon is a relatively new variety; it appeared in the early 90s of the last century in New Zealand. From there, he arrived in the United States and also became popular. However, this variety is not yet as widespread as its competitor. 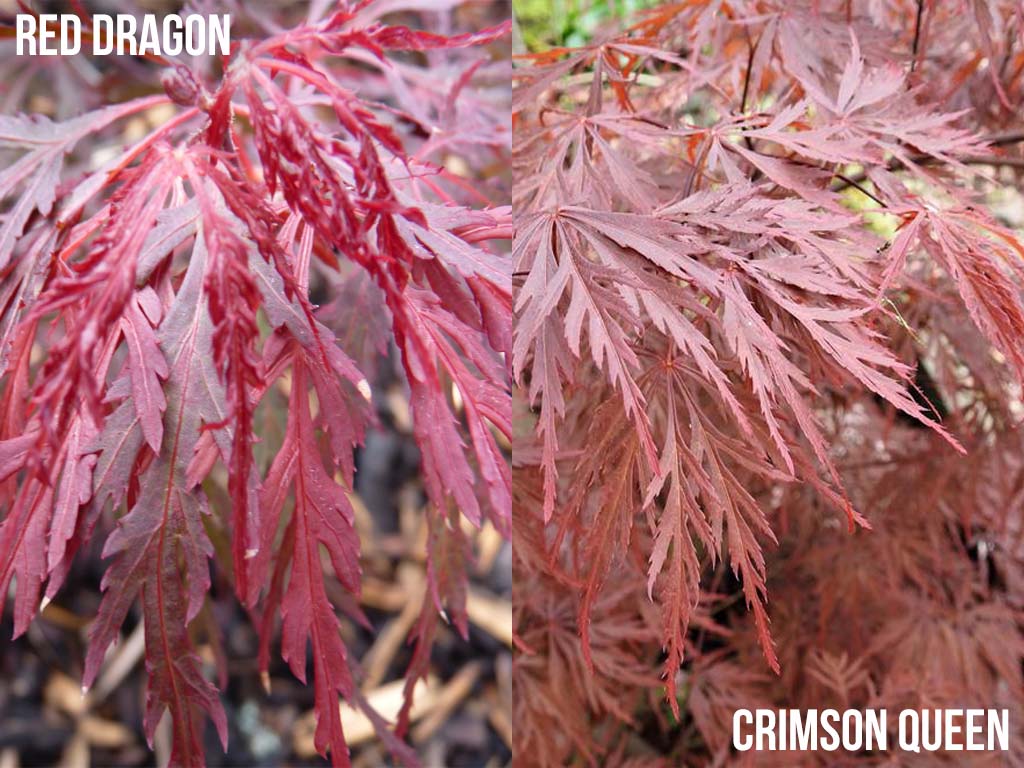 First of all, these two maples have different shades of red. Crimson Queen, as the name implies, has a crimson-red color while Red Dragon shows us burgundy-red or even slightly purple-red leaves.

Also, the color of the leaves of the Red Dragon is more saturated than its competitor. This means that the Crimson Queen has a slightly pale color that can be seen in the picture above.

Although this only applies to spring and summer colors. In the fall, both of these maples are bright scarlet.

In addition to the richer color, Red Dragon keeps the color longer and better than the competition. Its leaves all year round have rich, bright color, even in light shade. At the same time, Crimson Queen turns greenish-red by mid-summer.

Another advantage of Red Dragon is that the leaves’ backside has an orange hue that creates a bicolor effect. This is especially noticeable in light winds.

The advantages of Crimson Queen include the fact that the leaves are slightly more dissected than the competitor. This means they are more decorative in shape but lose in color.

The size, shape, and growth rate are different for each of these maples.

Let’s start with the growth rate. Crimson Queen has a relatively fast growth rate, and it is increasing by 1 foot per year. At the same time, Red Dragon has a medium growth rate; its annual growth is about half a foot or a little more.

In ten years, the Crimson Queen will be about 8 feet tall. If you grow it for a long time, this maple will reach a height of more than 10 feet.

The Red Dragon at the age of ten will be 6 feet tall. Depending on the growing conditions, the size of these maples may differ from the usual ones. In colder climates, plants will grow a little slower. Also of great importance is the amount of sunlight and water.

Crimson Queen has a broader habit, and its branches grow more in width than in height. As a result, this variety has the shape of a mushroom.

The branches of Red Dragon stretch up a little more than the competitor. As a result, this maple has the shape of a classic tree. For the same reason, it can sometimes reach the same height as the Crimson Queen.

The young branches of both of these maples tend to droop, creating a weeping effect. However, due to the fact that the main branches of Crimson Queen grow more horizontally, the weeping effect is expressed better.

You need also remember that the size of each of these varieties depends on the height at which it is grafted. Nurseries often sell plants grafted at the height of 2-3 feet. In this case, the maple can reach its maximum height faster.

You can plant Crimson Queen in the shade, and then it will not burn in the hot summer. In this case, it will not have a dark red color but will be greenish-red.

If you want the leaves of Crimson Queen not to scorch and have a nice red color, you need to give the exact amount of sunlight.

In hardiness zones 7-8, plant this maple should get up to 6 hours of direct sunlight from morning to midday. For 5-6 zones, you can increase the sun exposure to 8 hours.

With Red Dragon, everything is different. This variety perfectly tolerates a large amount of direct sunlight, regardless of the climatic zone in which you grow it (from 5 to 8 zones).

Due to the fact that the color of Red Dragon is more saturated, it is better protected from the destructive effects of UV rays. Dark burgundy pigment better reflects the sun.

Although you should not plant Red Dragon in the full shade because otherwise, the color will be pale and green pigment may appear.

As I mentioned at the beginning of the article, Red Dragon is a newer variety than Crimson Queen. For this reason, it is not as widespread as its competitor.

Of course, you can find Red Dragon without much difficulty. However, so far, it is not propagated as much as Crimson Queen. Over time, everything will change, but today everything is exactly like that.

Due to the smaller number of offers and excellent ornamental features, the Red Dragon is a bit more expensive than the Crimson Queen. The price difference is not too large and is about 20-30%.

If you try hard, you can find nurseries that offer both of these varieties at about the same price. However, in general, so far, the trend is that the Red Dragon is a little more expensive than its competitor.

I have already described the main differences between today’s two maples. Let’s talk a little about the similarities between them.

In fact, these are two very decorative trees and can bring a lot of beauty to the garden. They will quickly turn into large red balls and be a great accent to green plants after planting.

Like most maples, these two need enough moisture. This is especially true in drought. In the absence of rain, water these trees once a week and in extreme heat twice a week. Do not allow the soil to dry out more than an inch.

With additional watering, you can avoid the burning of leaves that is typical of Crimson Queen.

Do not cover the trunk with mulch; in other words, there should be a gap of at least 1 inch between the trunk and the mulch.

The advantage of both Crimson Queen and Red Dragon is that they do not need pruning. They have the right habit, and they grow relatively slowly, so you do not need to shorten them in the first few years.

I always recommend spraying the plants at least once a year with a fungicide against diseases and a pesticide against insects. This is necessary to avoid damaging the maple.