Japanese maples are some of the most fascinating trees in modern horticulture. Many homeowners plant them in their yards, but problems sometimes arise. In this article, you will find solutions to the most common problems associated with Acer palmatum.

Next, we’ll break down these cases in more detail and touch on a few others.

Verticillium Wilt and other diseases 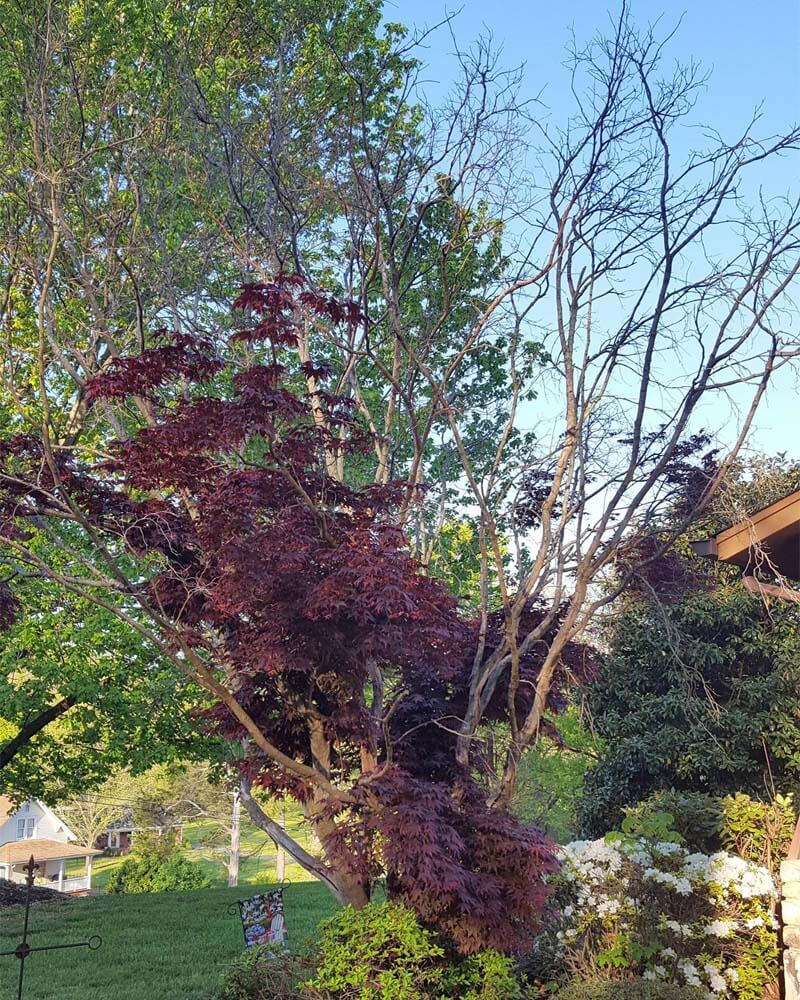 The Japanese maple is dying due to disease.

Verticillium Wilt is a disease that has caused the death of many Japanese maples. The pathogens of this disease cause the cambial layer of the tree to die off and it slowly shrinks.

The pathogens can enter the tree in a variety of ways. For example, through open wounds or by using non-sterile pruning tools. Insects can also infect Japanese Maple with the disease.

In the early stages, the disease shows itself as wilting and browning of the leaves. Black areas also appear on the bark. The smaller branches begin to die off.

In the later stage, the top or one side of the Japanese Maple dies off. The branches will shrivel up and turn brown.

To avoid the disease, always use only sterile pruning tools. After pruning, treat wounds with an aqueous solution of a multipurpose fungicide. Avoid overwatering the tree and ensure good air exchange around the crown.

If the disease occurs, cut off the infected branches below the damage. Use a sharp and sterile tool. 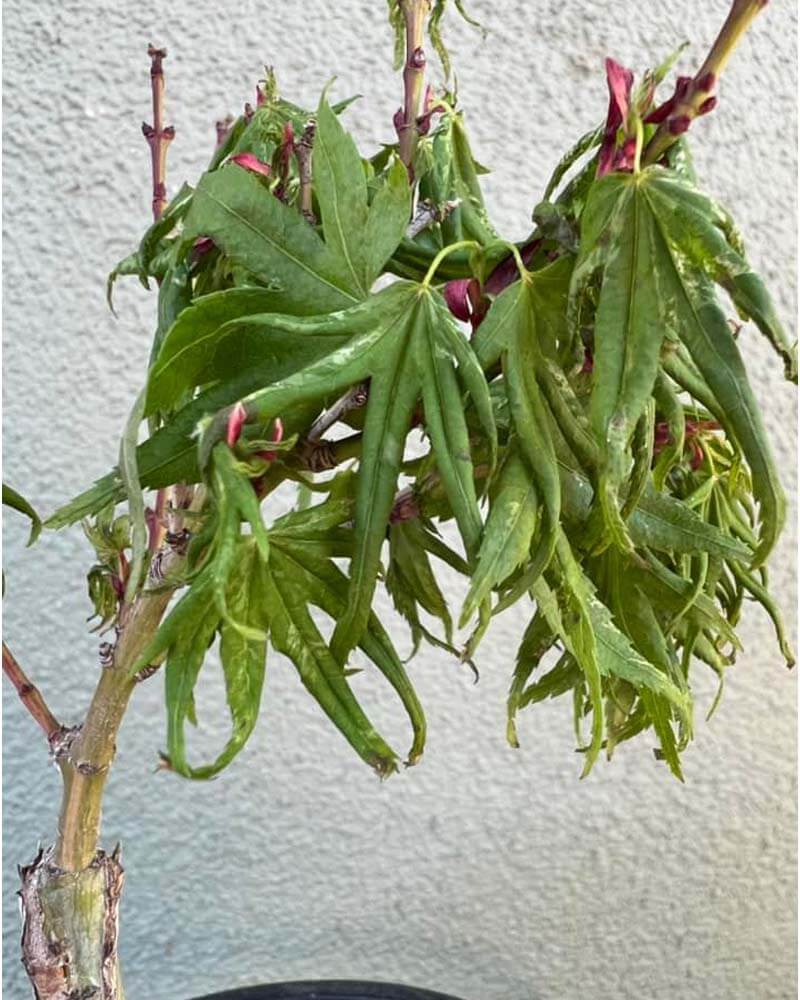 Root rot is the second most common cause of Japanese maple death. It usually happens because the soil around the roots is too wet and Japanese maples are known to hate wet feet.

As a result of overwatering, the roots become soft and lack oxygen. This is a perfect environment for the development of rot, which quickly destroys the roots.

Symptoms of root rot are browning or yellowing of the leaves. As a result, the leaves are dying. The second sign is constantly wet soil in the root zone.

To avoid root rot, plant Japanese Maple trees away from places where there is a lot of water, such as a pond, a stream, or a place where water collects from the roof. Use well-drained soil for planting.

Water the Japanese maple only when 2 inches of soil is dry, but not before. Fully established trees need almost no watering.

If root rot occurs, eliminate the cause of overwatering. Water the tree less frequently or move water away from the root zone if possible. 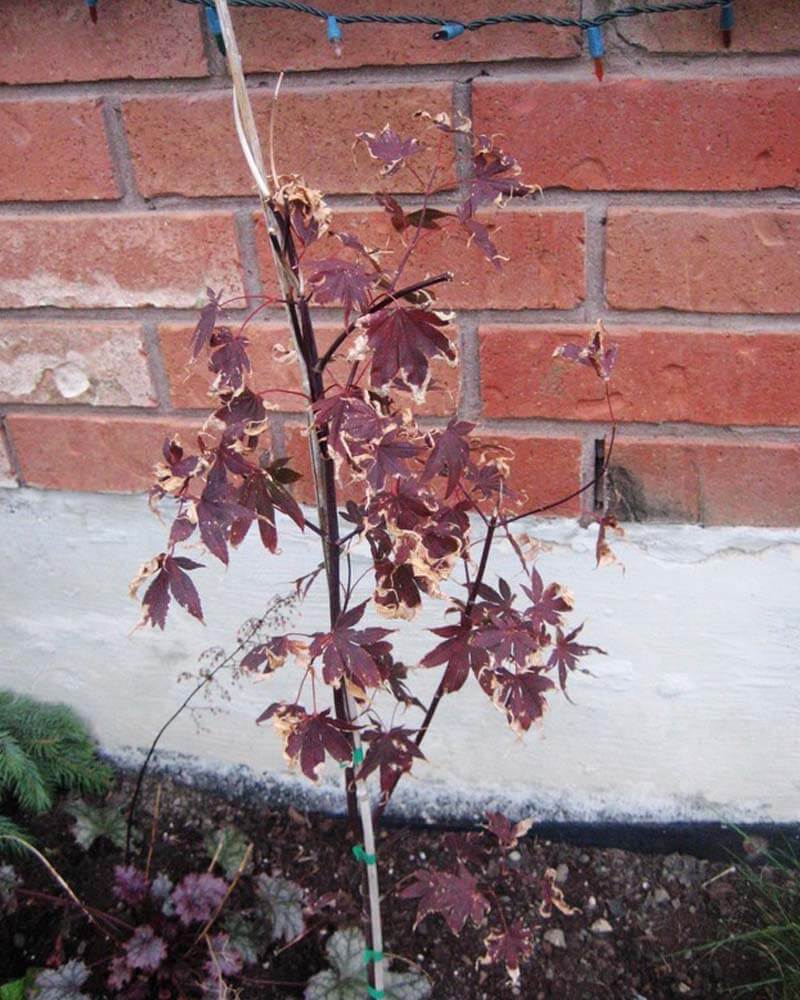 Japanese maple dies due to dehydration.

Lack of water causes very much like dying symptoms in the Japanese Maple. This usually happens during summer heat and drought.

Like all plants, the maple needs water for normal existence. But when there is not enough water, its leaves begin to wilt. If the sun is very strong at this time, the leaves can turn brown around the edges.

In general, dehydration is the first thing that causes the leaves to die. At the same time, the tree may go into summer dormancy. To check if the maple is alive, crush one of the buds, if it is green on the inside then the maple is still alive and can be saved.

Water the Japanese maple with a few gallons of water so that the soil around the roots becomes moist. It is best to use a drip hose.

Place shade over the tree if possible for a few weeks. This will drastically reduce the amount of moisture evaporating and keep the tree from overheating.

Water the Japanese Maple as soon as the soil is more than 1 to 2 inches dry. Keep an eye on the soil around the root zone at all times. Newly planted and potted maples are most susceptible to dehydration.

Read more: How much water does a Japanese maple need? 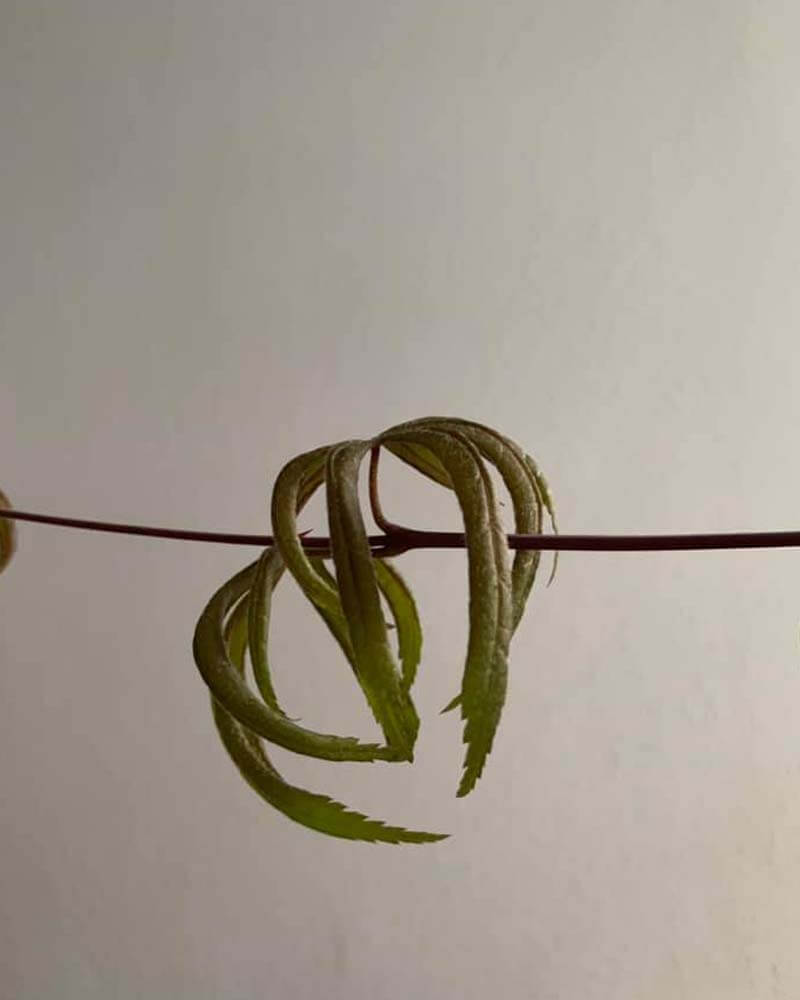 Japanese maple dies due to overfertilization.

Very often, people want to speed up the growth rate of the Japanese Maple by giving it a lot of fertilizer. This causes damage to the root system that becomes visible as brown burns on the leaves.

Another possible indicator of overfertilization is a fast growth, but poor maturation of the leaves and branches. As a result, they become soft and hang down.

This can cause the tree to die or look very unhealthy.

The first thing to do is to replace the topsoil with fresh soil. But don’t damage the roots. Replace only the soil to the depth where there are still no roots.

Water the Japanese Maple with plenty of water to wash excess salts out of the soil.

Thereafter, fertilize the Japanese Maple no more than once a year with a slow-release fertilizer. Always follow the product manufacturer’s recommendations. Read more about this in How often should I fertilize my Japanese maple? 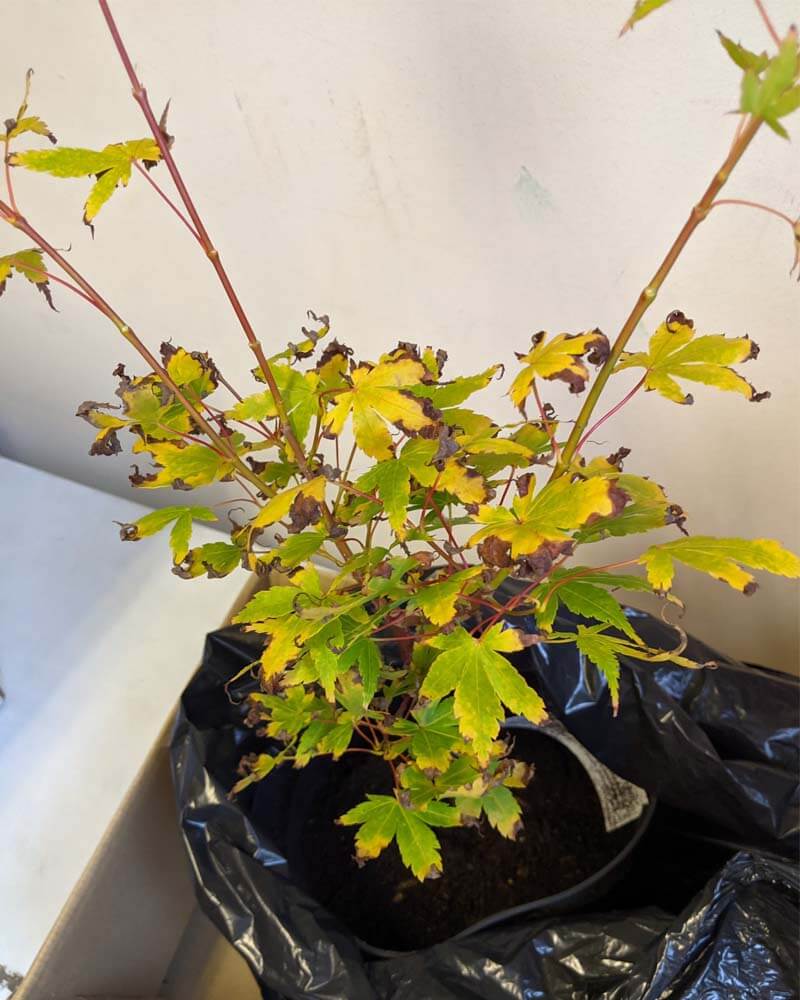 Alkaline soil is not a suitable environment for growing Japanese Maples. In general, most soils are neutral, but there are places with alkaline soils and if a Japanese maple is planted there, it will eventually die.

The fact is that in alkaline soil the tree is not able to consume minerals necessary for photosynthesis. As a result, the leaves turn yellow, this is called chlorosis. The tree begins to grow very slowly and die.

Buy a soil pH test kit and use it as directed on the label. If the pH is above 7.0 you need to use an acidifier.

You can find different types of soil acidifiers on the market. These can be either aluminum sulfate or garden sulfur. Use the product according to the manufacturer’s recommendations.

Also, mulch the root zone with compost. It will also acidify the soil a little and make it more nutritious. But avoid volcano mulching, i.e. do not put mulch on the tree trunk.

Read more: What soil does a Japanese maple need? 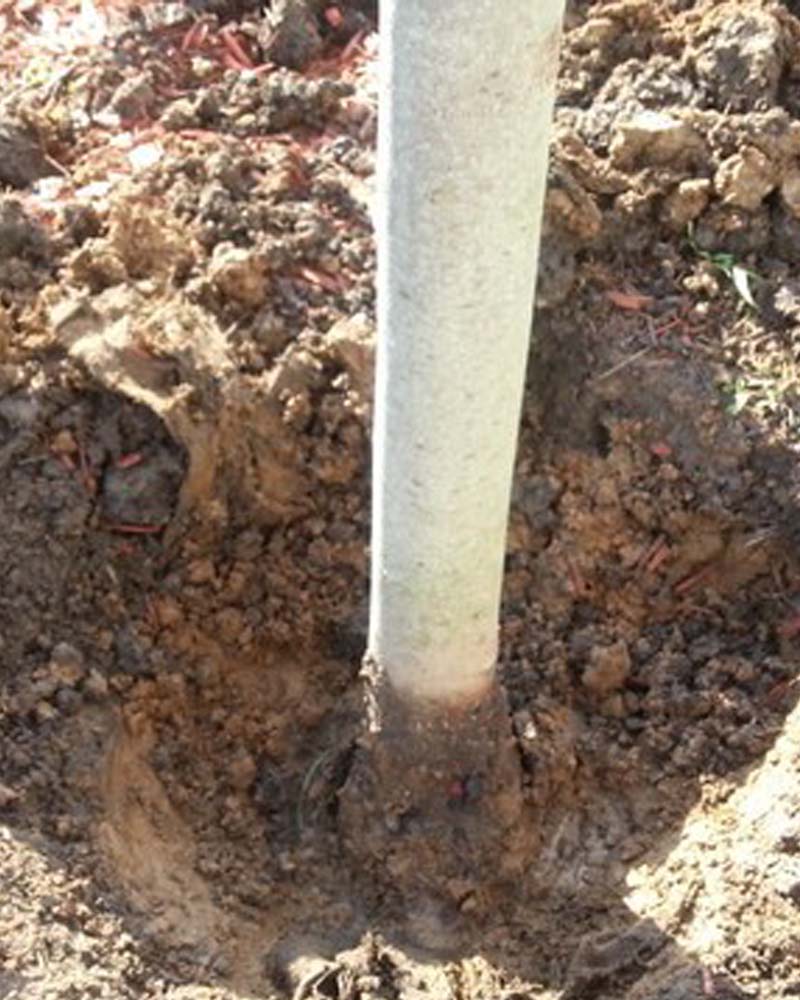 Planting too deep can cause the Japanese Maple to stop growing. If nothing is done, it will most likely die.

Very often beginners plant trees so that the place where the trunk joins the roots is buried in the ground. This is a critical mistake because as a result, the trunk begins to rot in this place.

This leads to a stoppage of growth and loss of leaves. After a while, the tree will die.

Clean the ground near the trunk. Do this gently to avoid damaging the trunk or roots.

Get to where the trunk ends and the roots begin. This is the right level of ground for the Japanese maple. Remove all soil that is above this level in a circle 2-3 feet in diameter in the center of which will be the trunk.

If possible early next spring, transplant the tree higher. Read how to do this correctly in How to Plant Japanese Maples? 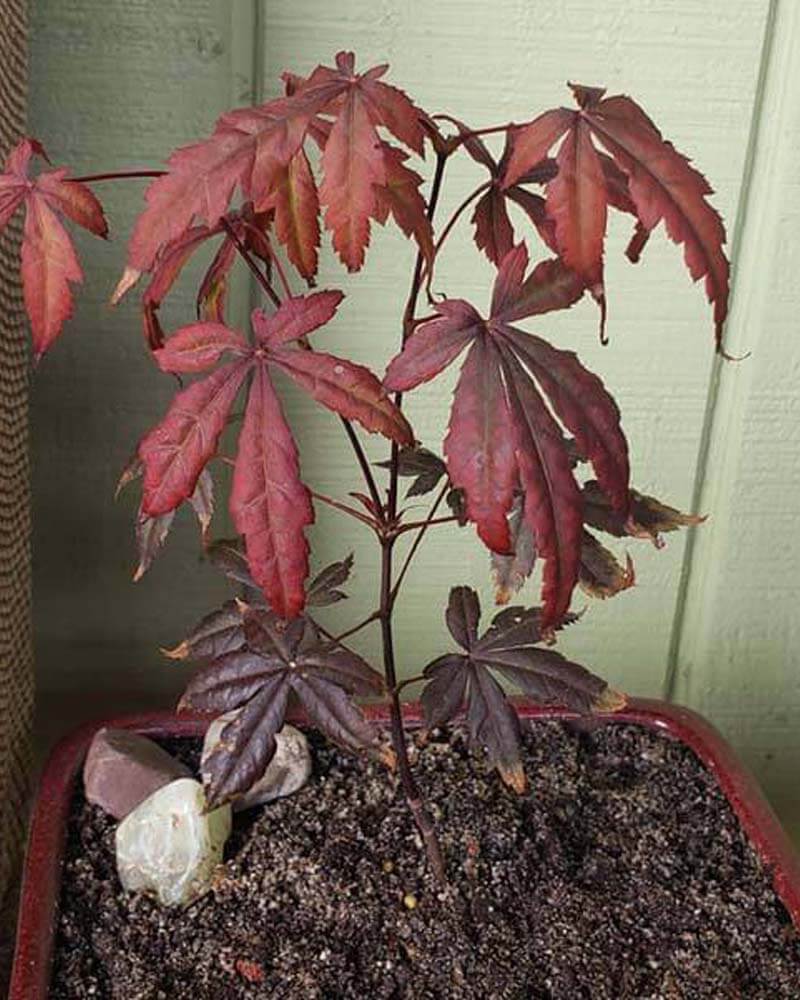 Replanting is always a challenge for all plants. This is also true for the Japanese Maple. If you transplant it while it is already foliated or the roots are badly damaged, it can die.

Transplanting a Japanese Maple in late spring or summer will almost certainly kill it.

If your maple’s leaves turn brown after transplanting, immediately install shade over it. This can be done by using a garden umbrella or by installing a frame and stretching the shading net.

Next, water the tree with several gallons of water to avoid dehydration. Watch the soil near the roots and don’t let it dry out more than 1 inch. Read more about this in the article How to Avoid Japanese Maple Transplant Shock?