Hostas are very hardy plants and difficult to damage. However, sometimes certain favorable conditions can occur that can have a negative effect on it.

The main cause of wilting hosta leaves is crown rot. This can be the result of overwatering or poorly drained soil. In addition, hosta leaves can also droop after transplanting or splitting.

These are not all the reasons why drooping can happen. Below we will go through all the possible cases in detail. You will also learn how to revive a wilted hosta. 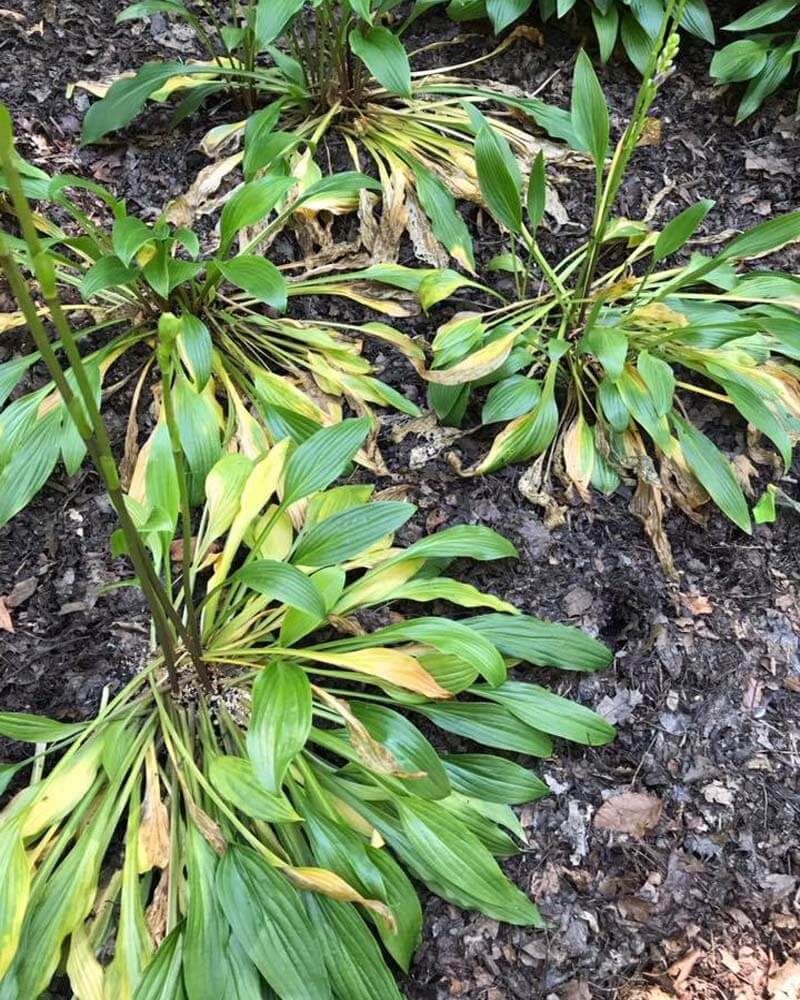 The hosta wilted because of crown rot.

Crown rot is probably the most common disease of the hosta. It is caused by pathogens that penetrate the hosta tissue. As a result, the crown begins to rot and over time the rot can spread to the stems and roots.

The first symptom of crown rot is the wilting of the leaves along with the petioles. The leaves may also turn yellow in whole or in part. Usually, a diseased hosta will show signs of fungus or have an unpleasant odor around it.

In most cases, crown rot is caused by overwatering or poorly drained soil.

The first thing you need to do is dig up the hosta. Next, remove all soil and wash the rhizome.

Remove any rotten part of the plant with a sharp knife. Treat the wounds with hydrogen peroxide and powder them with fine wood ash.

Plant the hosta in the full shade using a well-drained substrate. Water it very sparingly only if the soil near it has dried more than 2 to 3 inches. After crown rot, the hosta may take several months or even a year to recover. 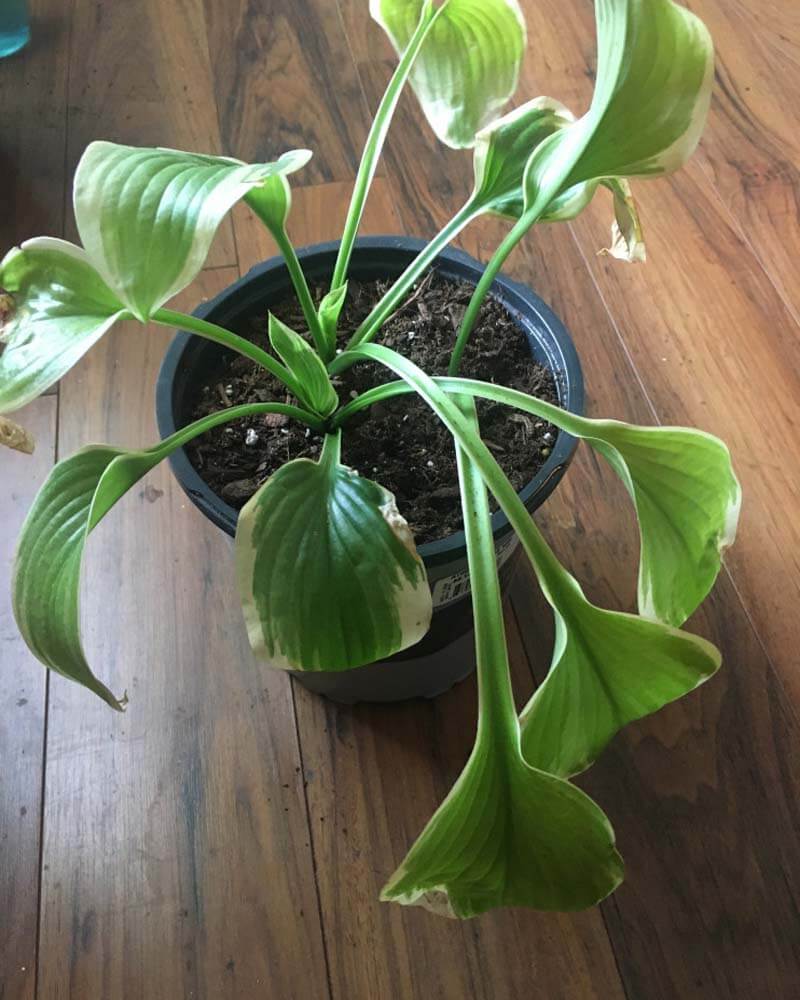 The hosta wilted due to lack of water.

Lack of water in the soil can cause the leaves of the hosta to wilt. Hostas are not drought-tolerant and need sufficient water.

They can tolerate a short period of drought, but if there is no water for a little longer, they will wilt.

Drought stress is particularly common with potted hostas. The potting soil can dry out for one day if the weather is hot. As a result, it will wilt and if it is not watered, it can lose all of its top.

Immediately water the hosta with 1-2 gallons of water or more if it is large. After a while, the petioles and leaves will come up.

Next, always keep the soil moist. As soon as it dries out a little more than 1 to 2 inches, water the hostas. This is especially important for potted hostas.

Read more: How often should you water hostas? 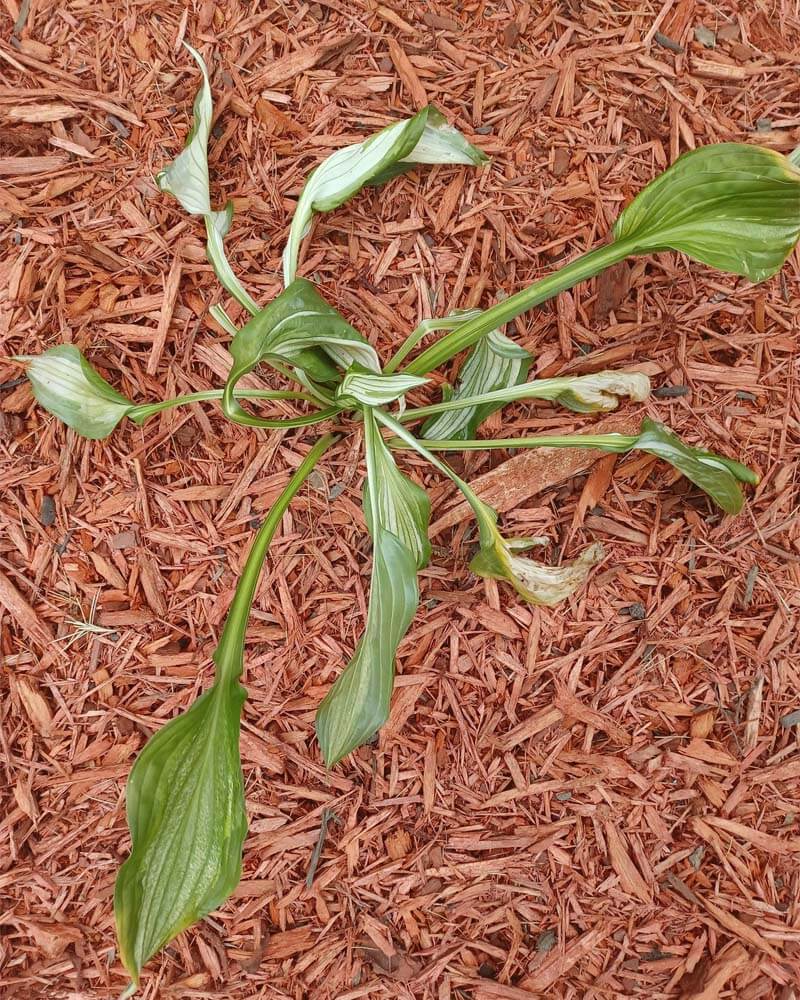 The hosta wilted after transplanting.

Transplanting is always stressful for the plant. Hostas also react to transplanting and sometimes this can lead to leaf drooping.

If you have not only transplanted but also divided the hosta, the consequences can be even more unpleasant. The leaves may wilt and die.

However, the rhizome will stay alive and continue to root. In the current year, 1-2 small leaves may appear. Full growth will begin in the following year, by the end of which you won’t even notice that the hosta was divided and replanted.

Immediately after transplanting, water the hosta with at least 1 gallon of water. If the hosta is large, use 2-3 gallons. Next, constantly check the soil, and don’t let it dry out more than 2 inches.

Place additional shade over the wilted hosta. This can be done, for example, by using an umbrella or shading net. The less sun the hosta gets, the faster it will recover. After a few weeks, the shade can be removed. 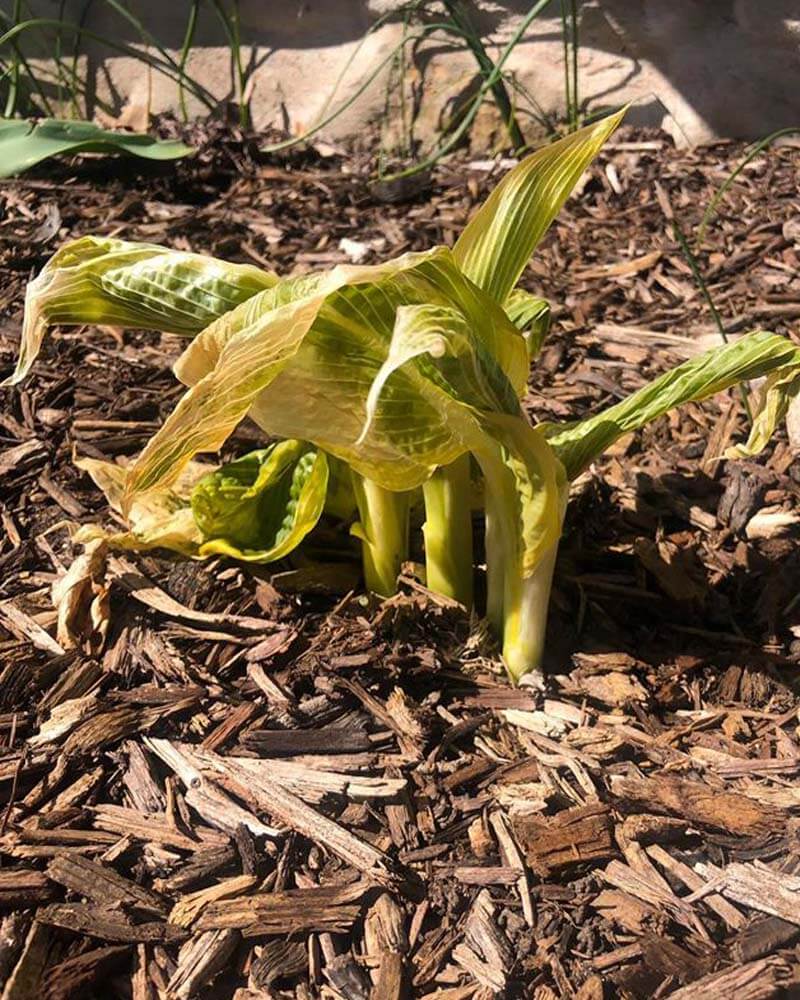 The leaves of the hosta are drooping because of the spring frost.

Late frost is a very serious problem for both ornamental plants and agricultural crops. It happens in spring when the plants have already begun to grow.

If a hosta has unfurled its leaves and a late frost occurs, it will be severely damaged. The leaves will become watery and droopy, as will the petioles.

In most cases, the hosta will lose some of its leaves, but the crown will remain alive. The plant will eventually recover.

To avoid damage, watch the weather forecast in the springtime. As soon as the frost is promised, cover the hosta with a frost blanket.

If the hosta has suffered frost damage, cut off any wilted or yellow leaves. If there is a wound on the crown, treat it with fungicide. 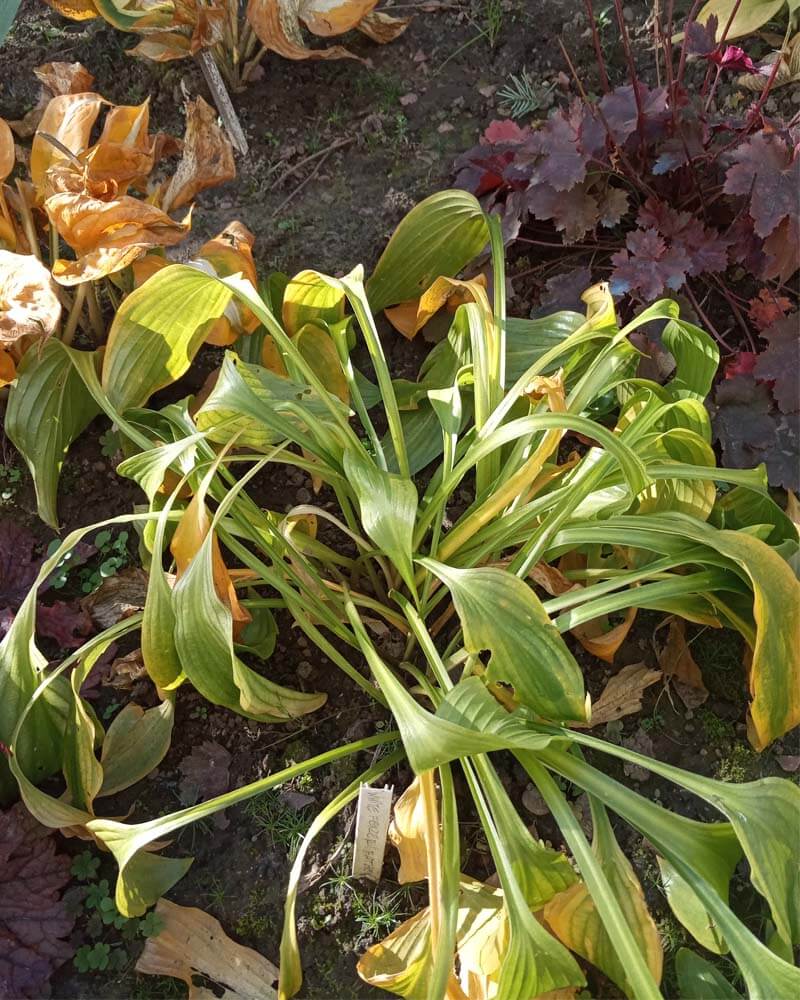 The hosta wilted at the end of the season.

If your hosta has wilted at the end of the season, that’s quite normal. The life cycle of a hosta involves the loss of above-ground parts each year.

This usually happens in the fall. At this time, the hosta turns yellow and the petioles fall to the ground. The bush simply falls apart.

Hostas with thicker petioles can remain upright until winter. But varieties with thin petioles will droop very quickly.

In most cases, they will wilt when they are already yellow. However, some varieties may wilt while still green. You can see such a case in the photo above, which was taken in October.

Sucking insects are another reason why hosta leaves can droop. A small number of them will do nothing to the hosta. However, if there are many insects, they can cause the leaves to become soft and droop to the ground.

Such insects usually include thrips, mealybugs, aphids and others. These insects are capable of piercing the tissue of the plant and sucking the sap from there. A large colony can weaken the hosta so much that it wilts.

If you see insects on the leaves or stems of the hosta, spray it with horticultural oil. Insecticidal soaps or pesticides also work well.

Repeat the spraying after a while to improve the results. Always follow the directions on the label of the product you choose.

Will wilted hostas come back?

In most cases, hostas will return after wilting. If only the top of the hosta is affected, it will eventually regrow.

This may happen this year or next year, but it will definitely happen. The important thing here is that you take proper care of your hosta.

The only exception to this might be if the hosta has withered from crown rot. This disease can quickly destroy the entire rhizome and the hosta will die without the possibility of recovery.

Therefore, never overwater hostas and plant them in drained soil. At the slightest sign of the disease, treat it right away.