The climate of our planet is such that you cannot be completely sure of the weather the next day. This is especially true for spring, as the difference in night and daytime temperatures can be very significant.

Hosta can survive frost if it is not too strong and does not last long. If the temperature drops significantly, the hosta may suffer, but even so, it will still remain alive.

In the following, you will learn as much about this subject as possible. You will also learn practical tips on how to fix or avoid the damage. 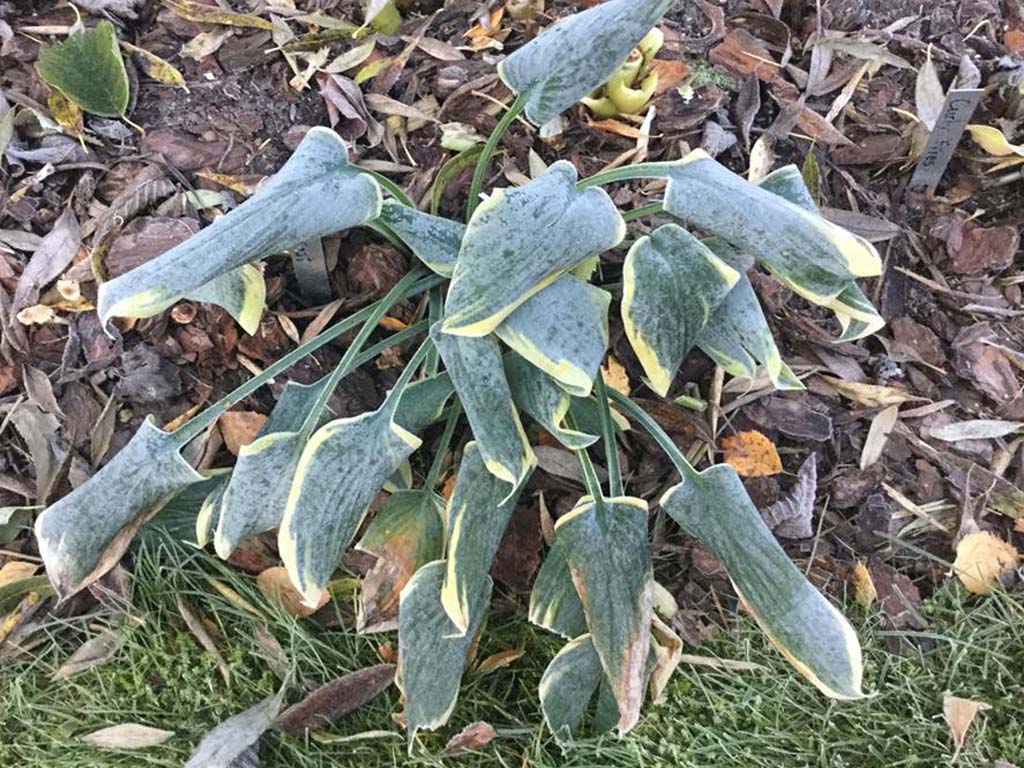 When active, the hosta can tolerate up to 32 °F (0 ° C). In this case, there should be no serious consequences.

Some varieties can tolerate about 28 ° F (-2 ° C). These are usually large hostas with tough leaves.

However, much depends on the duration of the frost. If hosta leaves emerge from the ground in the spring, but then the temperature drops even slightly below 32 °F (0 ° C) for a week or more, the hosta will suffer for sure.

On the other hand, if the temperature drops to 32°F (0°C) for just one night, the hosta can take it without serious consequences.

If we are talking about a hosta that is in its winter dormancy, it can survive a temperature of -40 °C (-40 °F). In fact, they are pretty hardy plants that can be grown in 3 to 9 USDA hardiness zones.

Hosta was lightly damaged by frost.

Frost can damage the hosta if it is active. This usually happens in spring when the young leaves have already emerged, but there is a risk of a late frost.

If frost strikes, hosta leaves can suffer with varying degrees of severity. At a minimum, watery spots may appear on the leaves of the hosta and this is not a big deal at all.

A symptom of medium frostbite will be the deformation and curling of the leaves. As a result, the first leaves of the hosta will remain ugly for the rest of the season. But the new leaves that will appear after the frost will be normal.

The worst that can happen is that the frost will destroy the leaf petioles and leaves completely. They will become watery and, depending on the weather, may turn yellow or black.

In general, a spring frost will not kill a hosta completely. In most cases, the rhizome will survive and the hosta will recover. However, in this case, there is a danger of crown rot, and you will find out how to fix and avoid it below.

Do I need to cover hostas for frost? 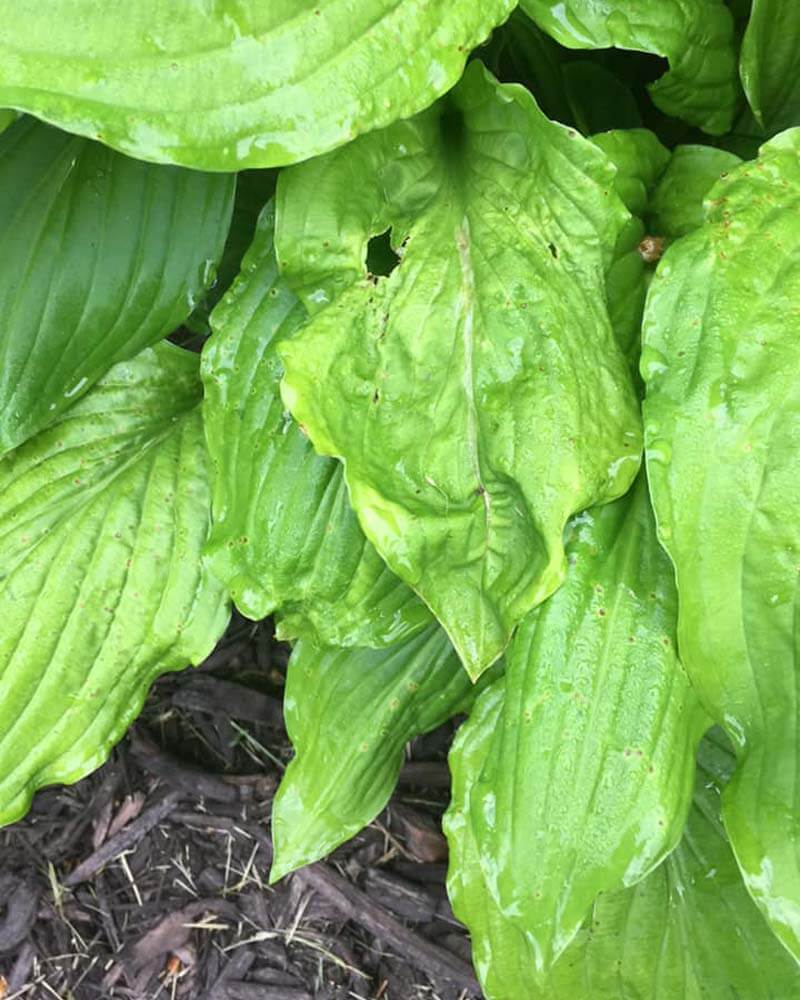 The leaves of the hosta are severely deformed by late frosts.

You definitely need to cover your hostas for frost. Watch what the weatherman says in the spring and if frost is coming, you need to protect your hostas. But you should only do this if the young leaves have already emerged.

Use a frost blanket to cover your hostas, which you can find online and at the garden store. Make sure the material is breathable. Avoid covering your hostas with plastic or other airtight material.

Place a frame over the hostas that are slightly higher than the hostas themselves. There should be a gap of several inches between the blanket and the leaves.

If you don’t have a frame you can use wooden sticks. Plunge 4 sticks into the ground around each shrub but make sure the top end of the stick is blunt and doesn’t pierce the blanket. All this is to ensure that the frost blanket and the leaves do not come into contact.

Put the material over the framework. The edge of the blanket should rest on the ground. Press it to the ground with rocks.

The heat from the ground will be trapped by the blanket around the hosta leaves and prevent frost from damaging them.

When should I cover my hostas?

You need to cover the hosta in the spring for late frosts. From the time the first leaves come out of the ground, watch the weather forecast. As soon as you hear that a frost is coming, cover the hosta.

Sometimes the frost can be several nights in a row but the weather is warm during the day. In that case, you can remove the fabric for the daytime.

In this chart, you can see when frosts may occur during the spring months in your zone. This data is based on years of observation of temperature fluctuations. You can use it to get a rough idea of which month you should be on the lookout for.

You should uncover your hostas as soon as the frost is gone. There is no need to leave your hostas covered if the weather is warm. However, if there is still a risk of frost returning, don’t hide the protection too far away.

What should I do if the hosta is frozen? 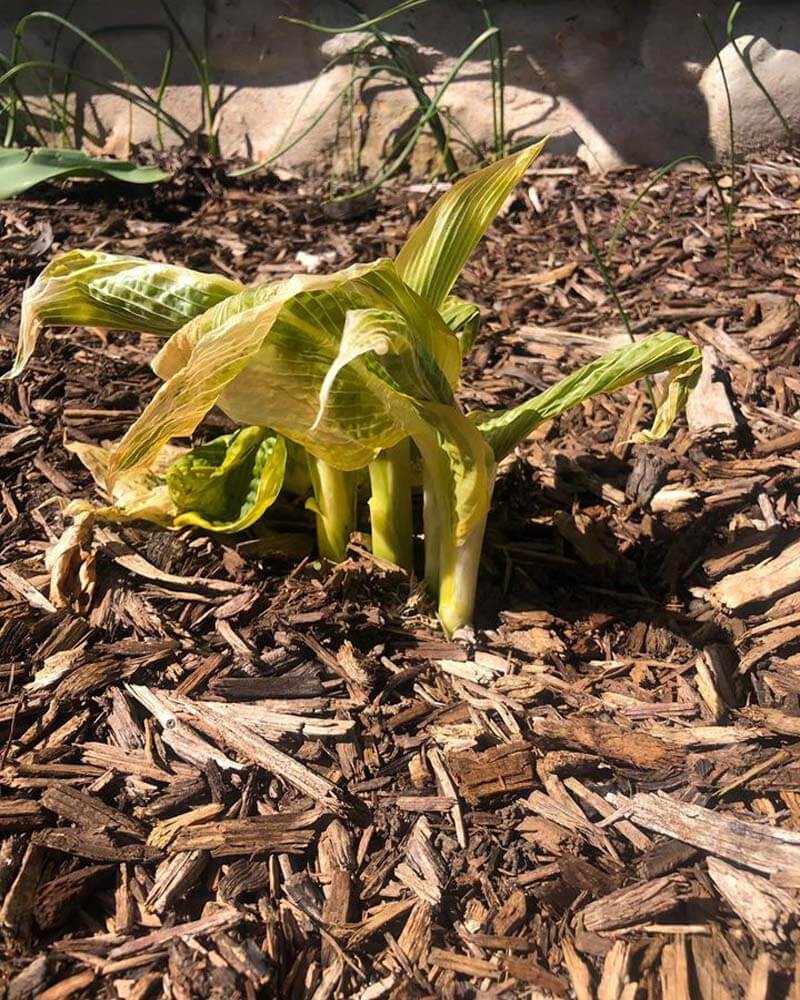 The leaves of the hosta are almost completely destroyed by the spring frost.

In some cases, a hard frost can damage the leaf petioles. As a result, they can begin to rot and, after a while, the rot can spread to the crown (rhizome).

If this happens to your hosta, clean the rotten tissue and wash the wound with an aqueous solution of fungicide or hydrogen peroxide. Next, water the hosta moderately, letting the soil around it dry out a bit between waterings.

Regardless of whether or not crown rot has occurred, there are a few things you need to do to make the hosta more comfortable.

First, water the bush with a liquid fertilizer once. Next, fertilize it with a slow-release fertilizer. This will be enough for the whole year.

Second, mulch the root zone with organics. The thickness of the mulch layer should be 1-2 inches. Do not put mulch on the stems and crown of the hosta.

Third, protect the hosta from slugs and snails to avoid even more leaf damage. Use iron phosphate for this purpose.

You can read more about proper hosta maintenance in the article Beginner’s Tips for Taking Care of Hostas.

Also, do not replant or divide the hosta for 2 to 3 years after frost damage.

Will hostas come back after a freeze?

Hostas will come back after the freeze. If your hosta has suffered from frost and you have done everything I recommended above, the hosta will recover after some time.

The recovery process can take anywhere from a few weeks to a few months. It will all depend on how extensive the damage was. Also, the more vigorous varieties will heal faster than the rest.

Sometimes it can take two years. You will have to be patient and take very good care of it.