In pots most plants look more exquisite, hence the high popularity of potted cultivation. But there are a number of rules to follow in this matter.

Tips for growing hostas in containers

Read on to learn as much as you can about potted hosta growing. Also, be sure to read the Instructions for Planting a Hosta in the Garden. 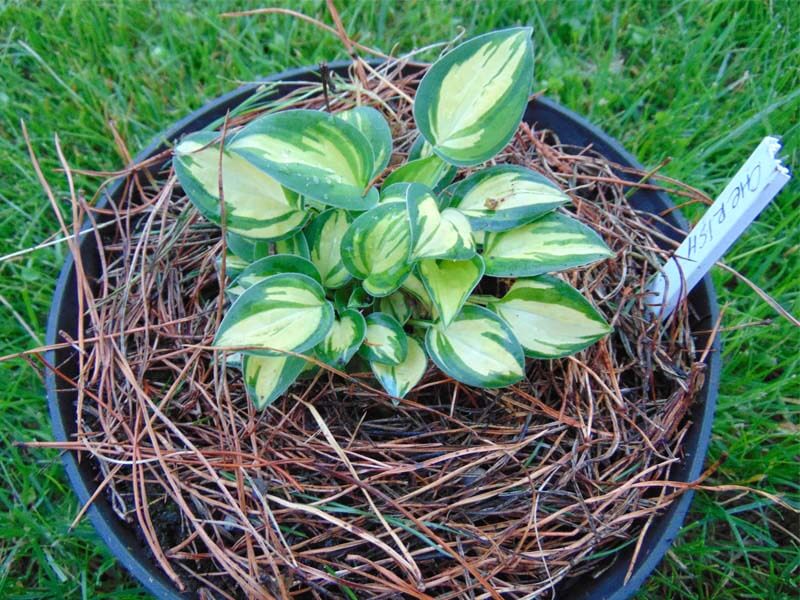 The best soil for a potted hosta is a nutritious and well-drained substrate. You can use potting soil from the garden center and it is quite suitable.

Make sure that the soil you choose is from a reputable manufacturer. It is better to buy a more expensive substrate of better quality than a cheap one.

You can also make your own substrate. Take half of the good quality compost and mix it with the same amount of native soil from your garden. The result will be soil that is both drainable and won’t dry out very quickly.

The best soil pH is 5.5-7.0. Most soils are in this range. But be sure to check this parameter before you buy.

The best time to plant a hosta in a pot is spring. Choose a pot slightly larger than the root ball of the hosta. Also, make sure there are drainage holes in the bottom of the pot.

It is best if the pots are plastic because they are better able to withstand the winter. Ceramic pots can crack in winter during hard frosts.

Center the hosta in the pot and fill any empty space with soil. Avoid covering the stems with soil. Only the roots should be in the ground.

Compact the soil lightly and pour half a gallon of water over it. If the hosta is large, you will need a gallon or more water.

Next, place the hosta pot in full shade. Avoid placing the potted hosta in full sun or semi-shade. The sun can get very hot in the pot and the soil in the pot will dry out quickly. As a result, the hosta will droop.

The best fertilizer for a potted hosta is a slow-release fertilizer. You should definitely feed your potted hosta as the amount of soil is limited and it has nowhere else to get enough minerals.

As for the fertilizer composition, equal amounts of nitrogen, phosphorous, and potassium will be optimal. Some dwindling from this is possible and not a problem. Also, make sure that the fertilizer contains at least a little magnesium and iron.

Hosta should be fertilized in the spring. If the fertilizer has a release period of less than 3 months, it should be reapplied in mid-summer. If you choose a fertilizer that lasts more than 6 months, a single application at the beginning of the growing season is enough.

Avoid fertilizing in late summer or autumn. Otherwise, the hosta might not go into hibernation during the winter and will be damaged by frost.

Also, avoid over-fertilizing as this can deplete the plant and damage the root system.

Water a potted hosta as soon as 1 inch of soil on top is dry. In summer, the potting soil can dry out very quickly and you may need to water 2-3 times a week.

In spring and fall, on the other hand, the weather is usually wet and the soil stays wet for a long period of time. So always keep an eye on the condition of the potting soil.

The amount of water should be half a gallon or more depending on the size of the plant.

Do not water the hosta too often as this can lead to root rot. If the weather is rainy and the potting soil is wet, you do not need to water.

The closer to winter, the less water the hosta needs. As soon as the leaves turn yellow, watering can be reduced to a minimum.

Avoid watering in the winter. In most cases, it has enough internal reserves to survive the winter. The exception is a winter that is too dry and warm.

Be sure to mulch your potted hosta to prevent the soil from drying out quickly in the summer heat. Mulch can also cut off some sunlight to avoid overheating the root system.

The best mulch is organic matter. You can use compost, pine bark, or pine straw. All of these types of mulch work well.

Be sure that the mulch is of high quality and free of pests and diseases. Give preference to reliable suppliers.

The layer of mulch should be 1 to 2 inches thick. Use a smaller fraction as it is more convenient in the limited space of the pot.

Avoid covering the hosta stems with mulch. A half-inch gap between the stems and the mulch material is best.

Depending on the type of mulch, it should be renewed every 1-2 years.

The hosta is a very hardy plant and can tolerate very low temperatures even in a pot. In general, you don’t have to do anything for it to overwinter successfully.

But if you want to make wintering a bit easier for your hosta, the first thing to do is to remove the dead leaves after the first frost.

Next, spread mulch almost to the edge of the pot. As a result, the top of the hosta rhizome should be buried under 1 inch of organic mulch. This mulch should be removed in the spring.

If you are able to do so, move the hosta pot to a cold room (basement, garage) for the winter. As soon as it gets warmer, take it back out.

Avoid over-wintering the hosta in a warm room. The hosta needs several months of dormancy. In a warm environment, it will die after a while.

Every year you need to transplant the hosta into a slightly larger container. Don’t plant it in a very large pot right away, increase the size gradually each year.

The best time to do this is spring. Choose a time when the hosta has not yet begun to grow but the soil has already thawed.

Prepare a pot 1-2 inches wider than the previous one. Pull the hosta out of the old pot as gently as possible to avoid damaging the roots.

Place it in the new pot and fill any empty space with the nutrient substrate. If the substrate is dry, water it with a little water.

Further care of a transplanted hosta is no different from that described in this article.