One of the most common pests of hostas is bugs. There are a number of beetles and other insects that eat hosta leaves.

To get rid of the bugs on your hosta, spray the leaves with neem oil or insecticidal soap. Thoroughly treat all the leaves, including the petioles, and spray the underside of the leaves. In most cases, this is enough to keep the bugs away.

This is a general recommendation, but there are some insects that can only be controlled with more powerful agents. In this article, we will look at the main bugs that feed on hostas and how to control them. 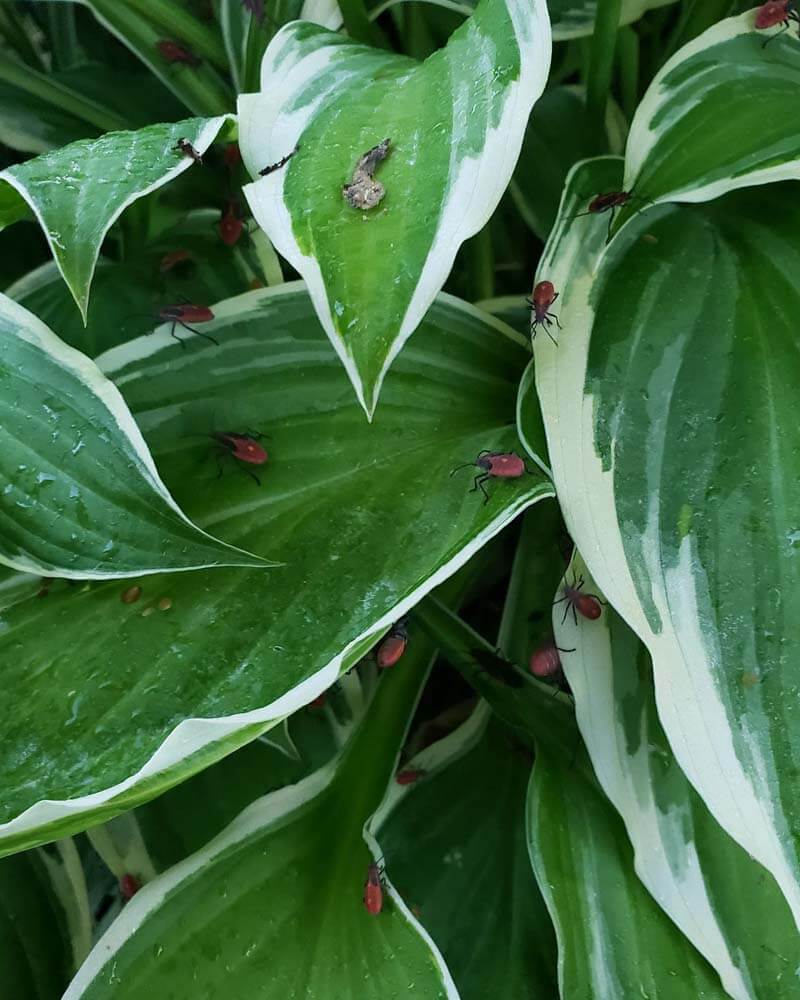 Boxelder bugs are quite large insects. They have a flat and narrow body with six legs. The upper part of the body is colored red and black.

Usually, these bugs feed on plant seeds. However, they are able to pierce plant tissue and suck out its juices. Their larvae can also cause damage to hostas.

You probably won’t notice any bite marks on the leaves of your hosta. However, the leaves may become discolored or even yellow due to the effects of boxelder bugs.

If there are too many bugs, shake them off the leaves in a bag and throw them away. Be sure to wear gloves as these bugs can bite.

Spray your hostas with a pesticide designed to fight boxelder bugs. Treat all parts of the plant, including the petioles. Also, spray other plants in the vicinity of the hostas. 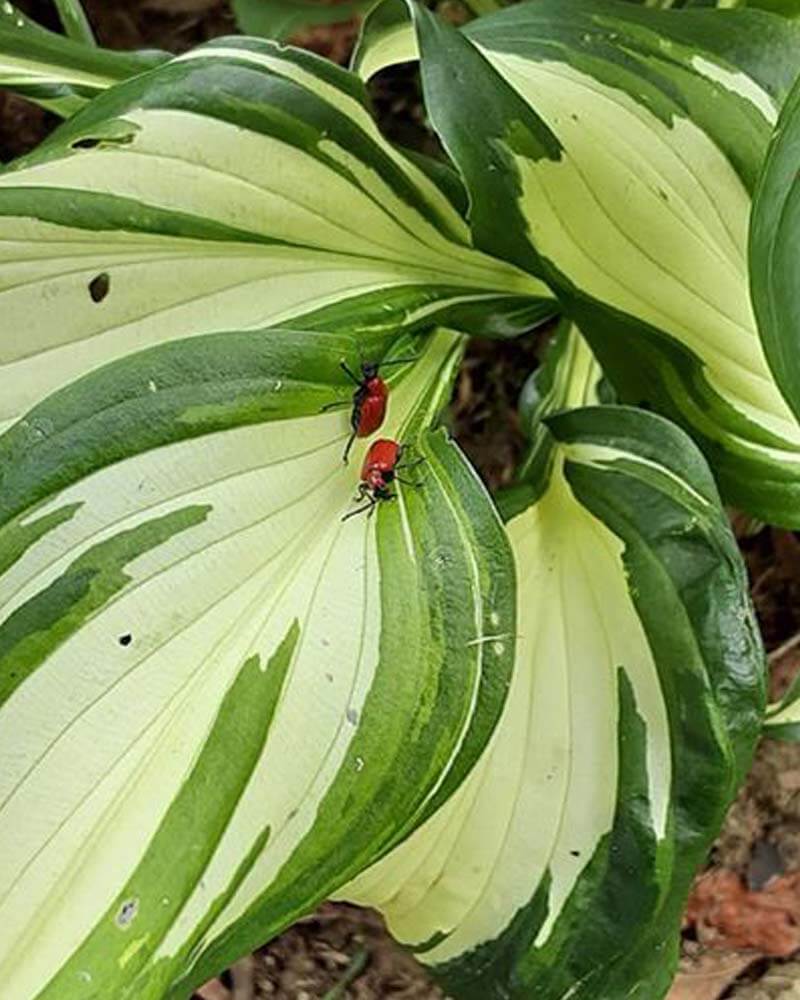 Leaf beetles are small bugs that reach a length of about 7 millimeters. They have an elongated body and a small head. The upper part of the body is red while the lower part and the legs are black.

These beetles can cause significant damage to hostas and other garden plants. Particularly dangerous are larvae that feed on leaves.

The female lays eggs usually on the underside of the leaf. That’s where you need to look for the source of the problem.

Collect all adult beetles and destroy them. Examine the underside of the leaves for eggs. If you see them, crush them.

Spray the leaves with a systemic insecticide. Repeat the spraying in a few weeks. Treating the hosta with neem oil may be helpful. 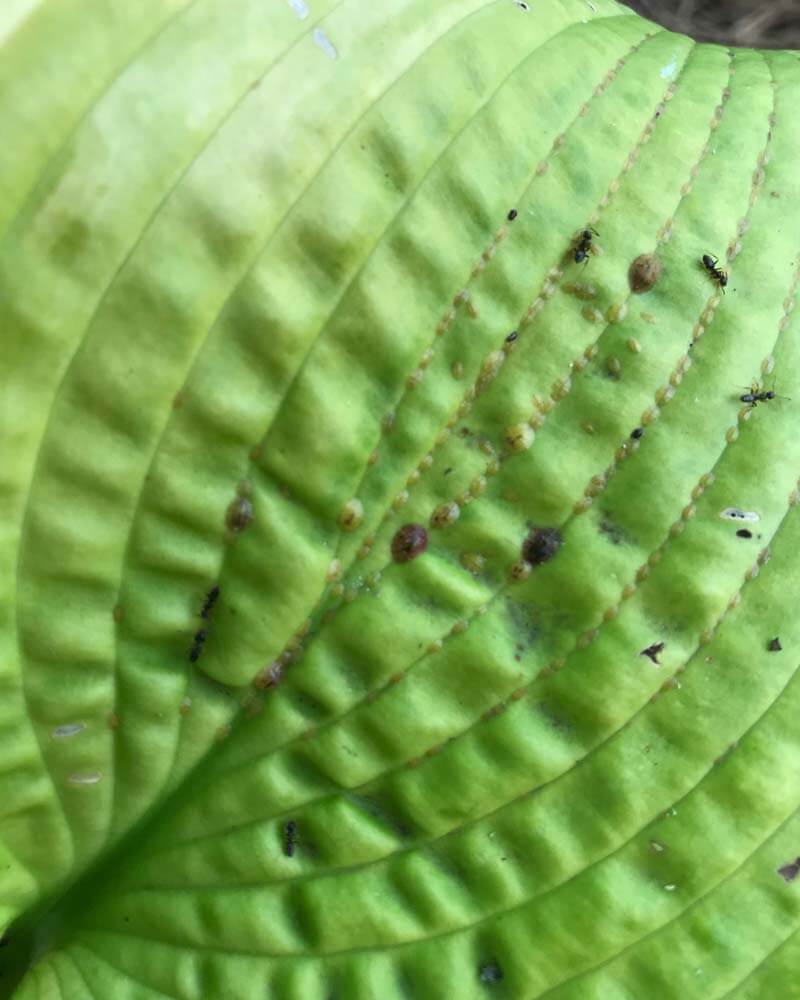 Scale are small insects that have strong armor on their backs. The color can vary from light gray to brown.

They attach themselves to leaves or stems and spend all their time that way. These beetles feed on the sap of the hosta by penetrating into its tissues with a sharp proboscis.

The female lays eggs near herself and dies. The next year the offspring emerge from beneath the mother’s shell.

Tear off leaves and petioles if very many insects have accumulated on them. Throw them in the trash. If there are not many insects, tear them off the leaves and throw them away.

Spray the leaves with an aqueous solution of horticultural oil. This is unlikely to kill the insects under the shell, but will kill the young insects that migrate. Repeat the spraying several times during the season but not more often than every 2-3 weeks. 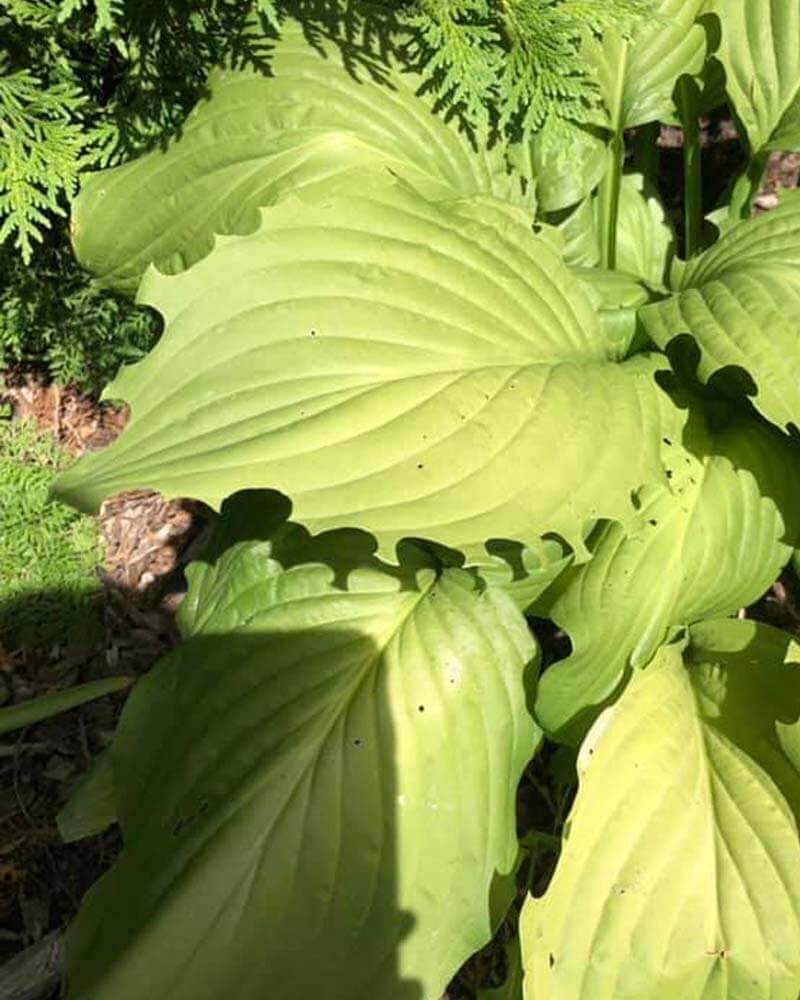 Leaf cutter bees are very similar to common bees. They have an elongated body with six legs. Their body color is yellow and black.

These insects are excellent pollinators, resulting in increased yields. However, the downside is that they damage the leaves of ornamental plants, including hostas.

When a female prepares to give birth, she cuts off circles on the edges of the leaves. From these circles, she makes a nest for her larvae.

This makes the leaves look like papercutting art. However, this almost never results in the death of the plant.

Since Leaf cutter bees do not feed on the leaves they cut, spraying with neem oil or pesticide is pointless.

The only method available is to find the nests of Leaf cutter bees. They should not be far from leaves that are damaged.

When you find the nests, destroy them. As a result, the Leaf cutter bees will be gone from your yard, at least for a while. 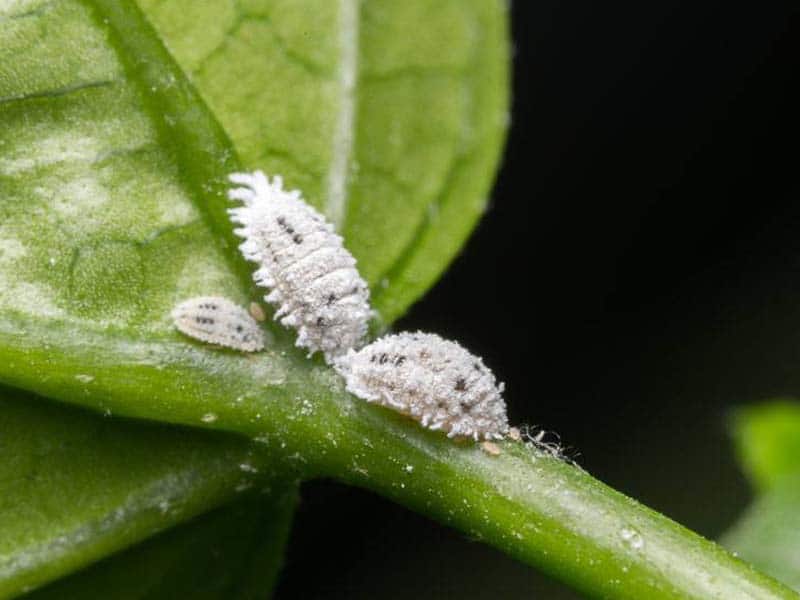 Mealybugs are white beetles with oval, flattened bodies. Their distinctive feature is the presence of white flour-like dust in their habitat.

The Female lays many eggs from which larvae hatch. The spreading speed is sufficiently high.

These pests feed on the sap of leaves and stems. Normally, the hosta is not killed by them, but the growth is severely stunted.

Moreover, black fungi can appear on their secretions. This is an additional problem for hosta owners.

The first thing you can do is to buy insects that kill the mealybugs. Ladybugs are the best way to keep this pest out of a garden.

If you need to get rid of mealybugs quickly, spray the hosta with neem oil or insecticidal soap. Repeat the spraying several times. 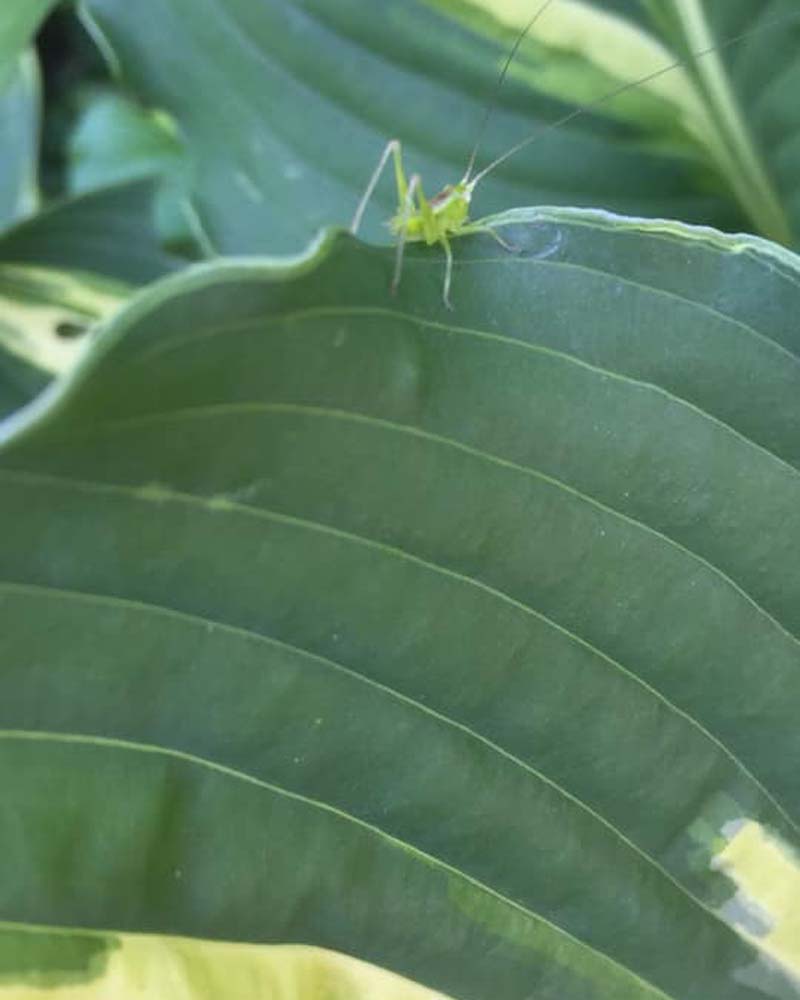 Grasshoppers are quite large insects. They are able to move very quickly jumping from place to place.

Plants are the basis of their food. Even a single grasshopper can cause noticeable damage to leaves. If there are many of them, any plant, including hostas, can be severely affected.

Normal insecticides don’t work well against grasshoppers. Garden oil and insecticidal soaps do not work at all against these pests.

The only effective way is to use baits containing carbaryl. This substance is capable of killing even large grasshoppers. It is absolutely environmentally friendly and easy to find on the market. 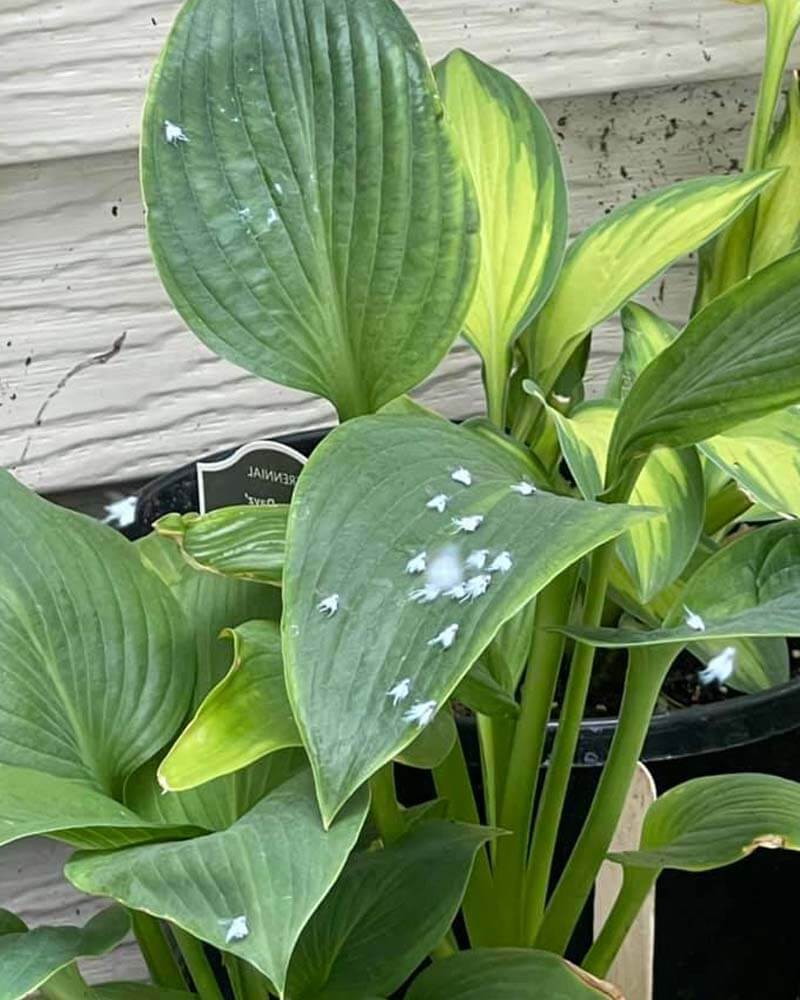 Wooly aphids are tiny bugs that have white fuzz on their bodies. This is a very noticeable distinguishing feature of these pests.

Wooly aphids have wings and can travel some distance. When the insects settle on plants, they form a fairly dense cluster that looks like a clump of white fluff.

Usually, these pests can be found on young tree branches. They feed on the sap of the tree and exude a sticky secretion that turns black with time.

In addition to trees, these bugs can also damage hosta leaves. Especially if there are a lot of them.

Spray the leaves with an insecticidal soap that you can get at the hardware store. Neem oil also works well.

Pick up the bugs with your hands and destroy them. The leaves that are most affected can be removed. 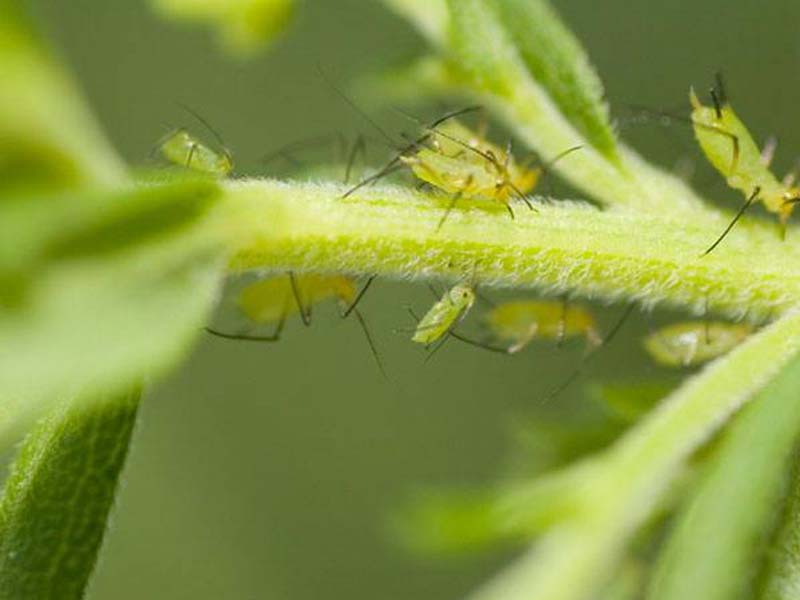 Aphids are probably one of the most common garden pests. They parasitize a huge number of plants, including hostas.

Aphids settle most often on hosta flower stalks. However, sometimes they can be found on leaves and even petioles. They suck the sap out of the leaves, causing the hosta to discolor or turn yellow.

These pests also produce secretions that fall on the lower leaves. A fungus can grow on these secretions and this can also harm the hosta.

Fortunately, aphids are easy to control. Spray your hostas with neem oil or insecticidal soap several times at two-week intervals.

You can also simply rinse the aphids off the hosta with a hose. However, this will only solve the problem for a short time. 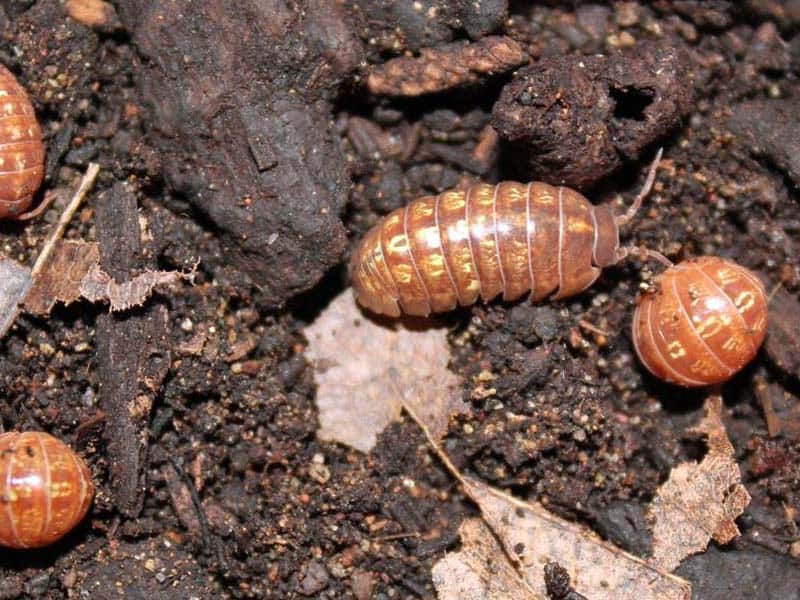 Pillbugs are small pill-like bugs. They reach a length of about half an inch. They are usually dark gray in color, but they can also be brown.

These pests usually feed on rotten vegetation. However, if their numbers are large, ornamental plants may be affected. You will not see these pests during the day because they feed in the evening or at night.

Clean up any rotten plant debris in your garden. Try to keep the soil surface dry between waterings.

To get rid of pillbugs quickly, spray carbaryl on your hostas. Repeat the spraying after 2 weeks. 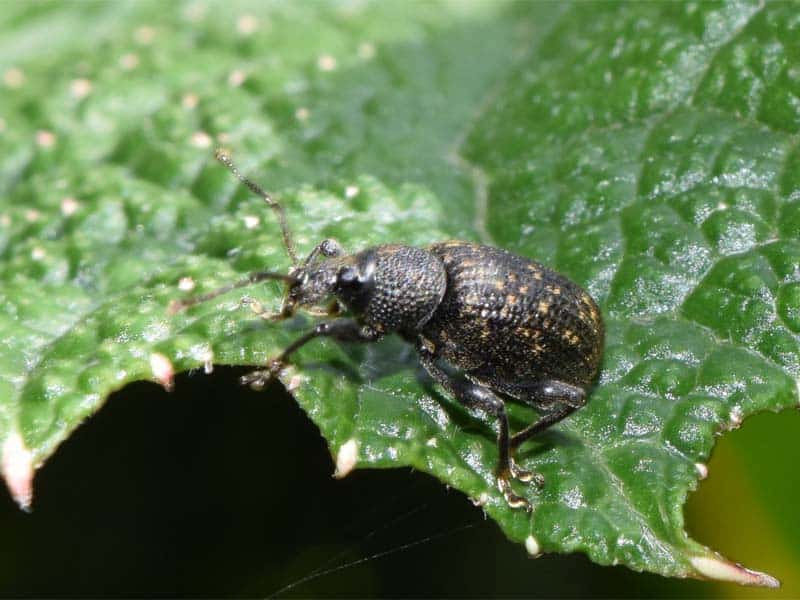 Weevils are quite a serious threat to hostas and other ornamental plants. They are quite large beetles that reach about an inch in length. They are usually black in color, but there are subspecies of other colors.

The weevil larvae feed on the roots of various plants. At the same time, mature weevils eat mostly leaves. A large number of them can severely damage the leaves.

Neither neem oil nor other biologically friendly methods have much effect on the weevil.

Only regular spraying of leaves and petioles with a systemic insecticide can produce results. You also need to drench the soil with an insecticide in the root zone to kill the larvae.