Sunlight is the energy that plants use to live and grow. However, different species have adapted to it in different ways.

Hostas need shade most of the day. They especially need shade in the middle of the day, as the sun is hottest at that time. Without shade, hostas will get sunburn and leaf discoloration.

That’s the short answer to this question. However, this is a rather broad topic that we will discuss in this article.

How many hours of shade do hostas need? 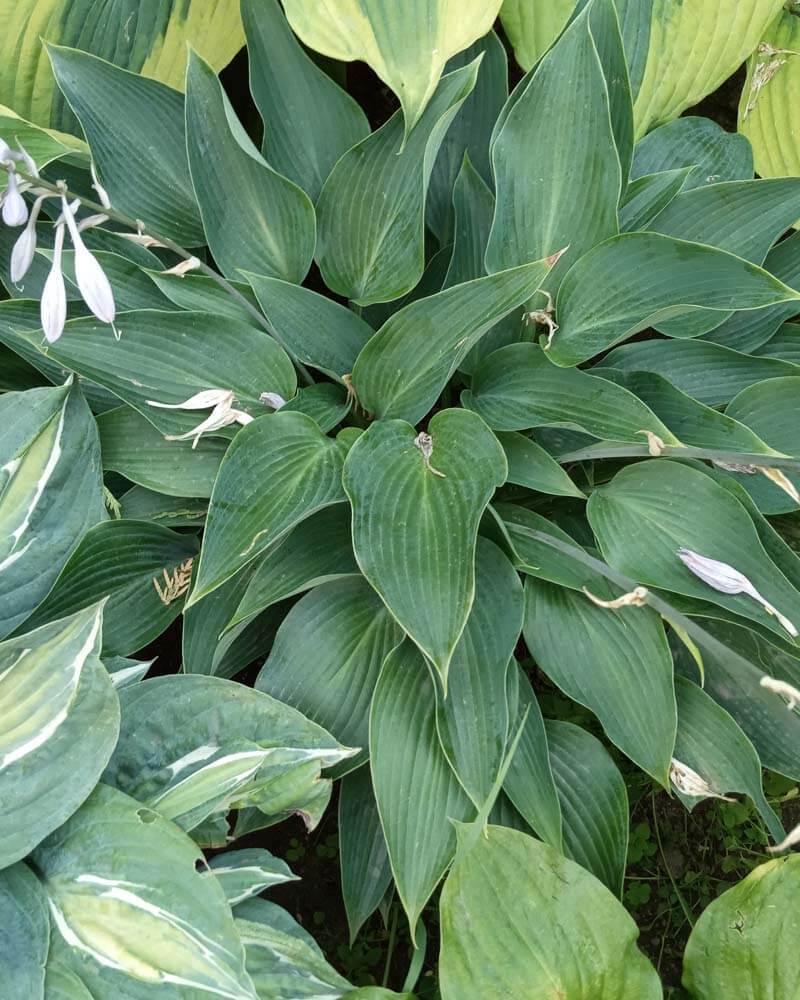 This hosta grows in the shade.

Hosta need at least 6-8 hours of shade during the hottest part of the day. It is best if the hosta stays in the shade from 10 a.m. to 4 p.m. A few hours of morning and evening sun can be tolerated.

However, much depends on the climate in which you live. For example, in zones 3-4, the hosta can take a bit more direct sunlight. In zones 8 and 9, however, it needs as much shade as possible.

Also, different varieties have different attitudes to shade. One thing is certain, all hostas will feel OK in partial shade. That is, they can get a few hours of direct sun in the morning or in the evening but receive shade in the middle of the day.

Can hostas grow in full shade?

A hosta can grow in full shade. Moreover, without direct sun, the leaves will be livelier and the hosta will grow a little more vigorously.

Blue hostas grow best in full shade. Their color is more intense and really blue. If blue hostas receive direct sunlight they will turn out more of a grayish color than blue.

On the other hand, variegated hostas in full shade will have less contrasting leaves. That is, the variegation will be less pronounced. White hostas can even turn green. It follows that these hostas need at least some direct sunlight.

Let’s be a little clearer that full shade does not mean full darkness. It is imperative that the hosta gets reflected sunlight all day long. It can also tolerate some direct sun but cannot grow in complete darkness, like mushrooms, for example.

Dappled shade is the best exposure for all types of hostas. This type of lighting mimics the light that prevails in natural hosta habitats. In the wild, hostas grow in the shade of trees where only a small fraction of the sunlight reaches their leaves.

If you replicate this in your yard, you can be sure that the hostas will not get sunburn and will grow vigorously. In addition, variegated hostas will have very beautiful coloration.

To achieve such a sunny exposure you need to plant the hosta under a tree, preferably one with a not very dense crown. We will talk about this in more detail below.

The second way is to create artificial shade using a screen. You will learn more about this later in this article.

What happens to hostas if there isn’t enough shade? 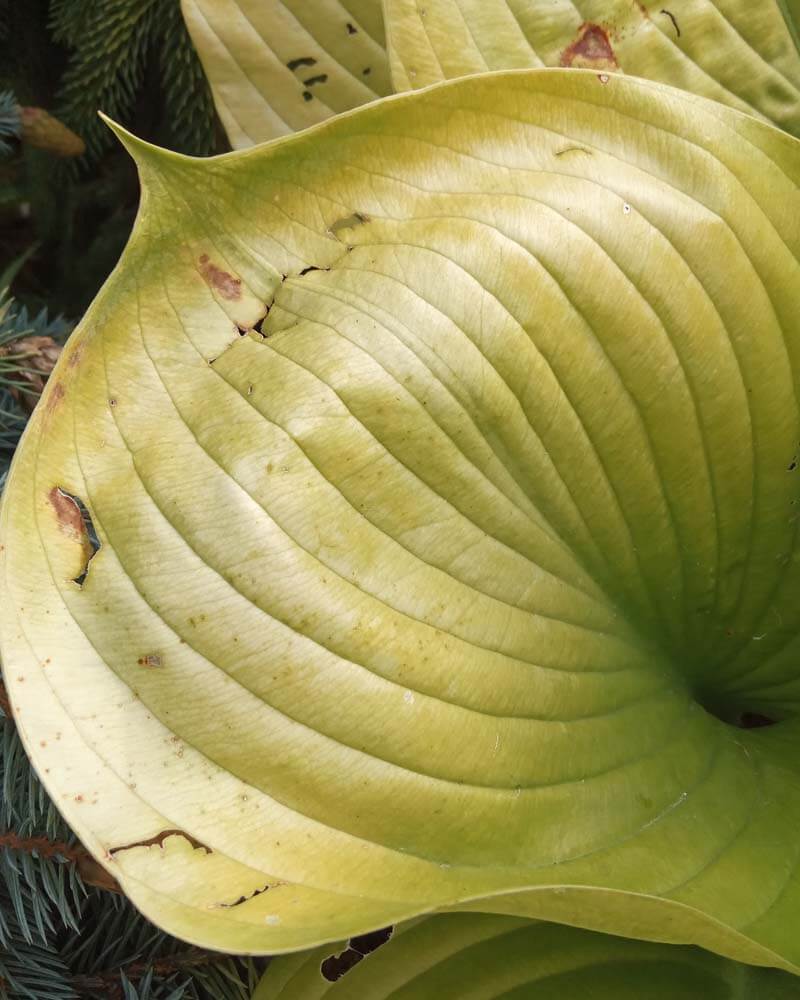 This hosta gets not enough shade.

The first thing that will happen if the hosta doesn’t get enough shade is that its leaves will become paler. In general, the leaves will not look as bright and lively.

Variegated hostas can become pale light or even white. But the color will not look vibrant but rather fade.

As for blue hostas and some green ones, they will turn greyish. There will be a great deal of white leaf covering and instead of blue you get a lighter grey.

In the worst case, the leaves will get sunburned. These can be white spots on the leaves or the leaves can turn brown around the edge.

If the sun was very strong, there will be large brown areas on the leaves that will eventually turn into large holes with a brown edge.

To remedy this, irrigate the hostas with a few gallons of water. Then place a shade over them, for example using an umbrella. What to do to avoid this, we’ll discuss further below.

How to make shade for hostas? 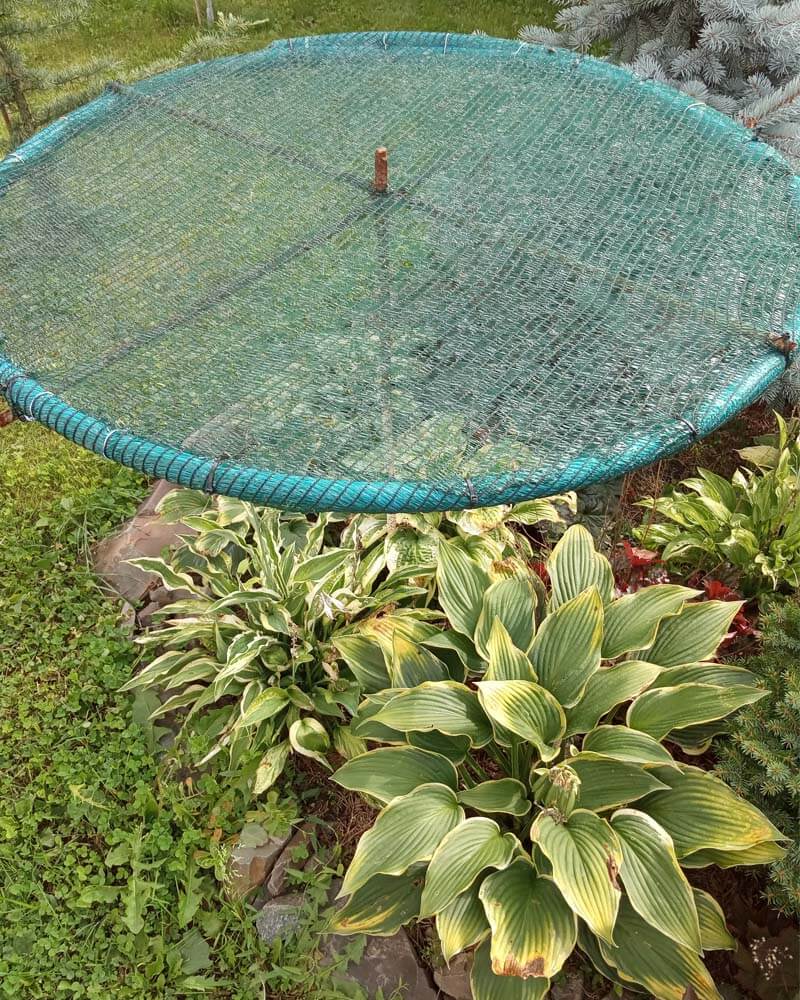 You can make a shade for hostas.

To avoid sunburn on your hosta, you need to create shade over it. The easiest way to get shade is to install a frame over the shrub and put a shading net on top.

Anything can be used as a frame. Wooden sticks, plastic pipe, or steel rods will work for the frame. Connect all the elements into a structure that can support a small weight of the grid and that’s it.

You can also use an old garden umbrella. Replace the fabric on it with a shading net and you have a great screen for your hostas.

You can buy shading netting at almost any hardware store or online. Use a screen that reflects at least 50% of the sun’s rays.

Another way is to plant some kind of plant over the hostas to create shade. This can be a small tree such as a Japanese Maple or Cherry Blossom.

Hostas also look good with standard plants. For example, standard conifers or standard hydrangeas. In this case, you get two-level landscaping and shade for your hostas.

And the last thing you can do is transplant the hostas to a shady spot. For example, on the north side of the house or any other building. You can also move the hostas under a large tree and you will learn how to do this in the next chapter.

Will a hosta survive in dry shade?

A hosta cannot survive in dry shade. A lack of moisture over a long period of time will have a negative effect on growth and the bush will begin to shrink.

Dry shade usually occurs under large trees. This happens because the roots pull all the water out of the ground and the plants that grow below suffer from dehydration.

But you can grow hostas under trees if you follow some rules.

First, do not plant a hosta under a tree that has an aggressive root system. This is especially true for Silver Maple, Magnolia, and some other trees.

The second is to plant only vigorous and large varieties. The more vigorous a hosta is, the better it will resist the roots of the tree it grows under. Large hostas can win the competition for water and minerals.

Before planting, clear the area where the hosta will grow from the tree roots to a depth of at least 2 feet. As for the space, clear at least 3 square feet.

Every year, trim the tree roots with a shovel around the hostas. This is best done in early spring.

Water the hostas under the tree regularly. The soil around them should not dry out more than 2 inches.

Fertilize the hostas at least once a year with a slow-release fertilizer. Also, apply compost to the soil before planting.