The small plants are very cute and easy to keep in a small area. But very often compact varieties are more prone to diseases and other troubles. This is what this article will discuss.

Pests, disease, and winter sunburn are the main reasons why Dwarf Alberta Spruce dies. To revive it, wrap it up in a protective covering over the winter. Also, spray the needles with horticultural oil and fungicide once a year. 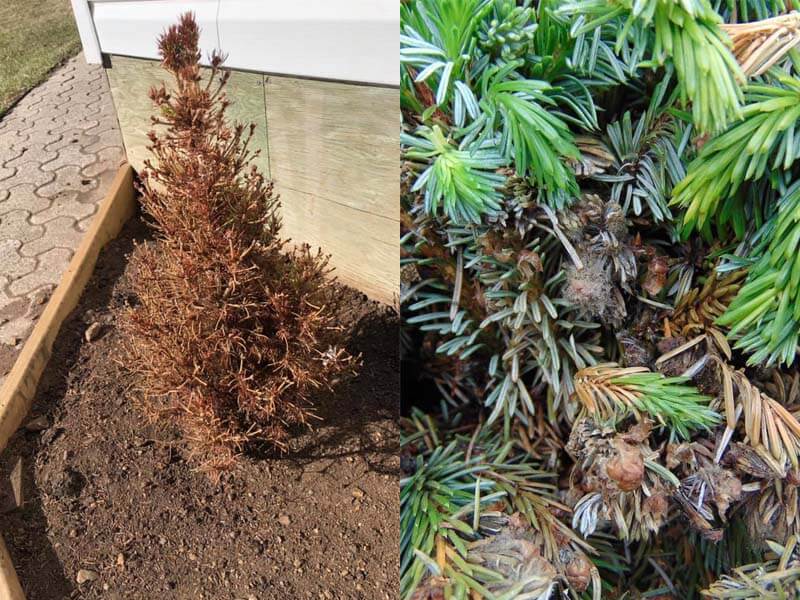 Dwarf Alberta Spruce needs plenty of sunlight to develop properly. However, winter and early spring sun can seriously damage it to the point that it may die.

If the spruce grows in full sun all day, it’s usually fine in the summer. But in winter, when the ground is frozen, there can be sunny days. If a dry, frosty wind blows during this time, the needles will dry out quickly because there is not enough water inside the plant.

If such conditions persist for a long time, Dwarf Alberta Spruce can lose all its needles and die.

To avoid this, plant it in a place protected from strong winds and with direct sunlight for half the day. In case of harsh winters, wrap the spruce with a burlap or a frost blanket. With the coming of warmth, the protection should be removed.

Another common cause of Dwarf Alberta Spruce’s death is pests. There are a number of creatures that can severely damage spruce, but one of the most dangerous is spider mites.

The danger of these pests is that they are very small and difficult to detect. The presence of mites on spruce becomes noticeable when a large part of the crown is already infested.

The main symptom of the mites is discoloration of the needles, then they turn brown and fall off. Usually, they spread gradually affecting one branch and then spread to neighboring branches.

To get rid of spider mites, wash them off with a stream of water from a hose. They do not like humid environments and are most active in warm dry weather.

The second thing to do is to spray the needles with an aqueous solution of neem oil. Prepare enough solution to thoroughly spray each branch. Repeat the spraying after a week.

Because of the dense crown, Dwarf Alberta Spruce is highly susceptible to various diseases because pathogens are very easy to multiply in such conditions. In addition, if the spruce is not properly placed and the weather is wet for a long time, it can lead to serious problems.

At first, grey mold or black spots will appear on the needles. Then it will change color to brown and fall off. This often happens in the spring. Young growths are most susceptible to fungal disease.

To avoid this, give your spruce at least four hours of direct sun a day. In addition, there should be good air exchange around the crown.

If the disease has hit the tree, spray it with an aqueous solution of fungicide containing copper. Repeat the spraying after a while. Good results can be obtained by alternating between different fungicides.

Problems with the root system also often cause Dwarf Alberta Spruce to die. The main cause of root damage is root rot, which occurs as a result of excessive watering.

If the soil around the roots remains wet for a long time, the roots will soften. Soft roots get rot much faster than normal roots. As a result, the needles become discolored and fall off.

The first thing to do in this case is to eliminate the cause of overwatering. If you have watered too often, stop doing it and only water when the soil is about 2 inches dry.

If the cause of overwatering is water flow from some source, move it as far away from the spruce as possible.

There is nothing else you can do, so you have to wait. If the damage was not extensive, the tree will recover after a while.

Sometimes it happens that a newly planted Dwarf Alberta Spruce loses its needles and dies. This occurs both when transplanting and when planting from a pot into the ground.

Repotting is quite a difficult ordeal for any tree because the root system is certainly damaged during it. As a result, the tree is not able to deliver water to the needles in the right amount and at the right speed.

As for planting from a pot into the ground, problems can also arise here, even if the roots are not damaged.

The fact is that in a pot the root system is compact and very often potted spruces are grown under a shading net. If you plant such a plant in the summer heat, it can die.

To reduce stress, plant or transplant Dwarf Alberta Spruce only in early spring on a cloudy and humid day. Water it well a few days beforehand.

When planting, try to damage the roots as little as possible. Then place the shade over the tree for several weeks or even months. Especially if the summer is too hot and dry.

Water the newly planted spruce as soon as one inch of soil is dry. Mulch the soil with pine bark to prevent the soil from drying out quickly.