Dwarf trees have always been the object of special attention because they can be used to recreate a miniature landscape of wildlife in the yard. Dwarf Alberta Spruce was one of the first to be used for this purpose.

But there are many subtleties of growing this delicate plant. One such is its relationship to different types of lighting.

We will look at this issue in more detail next. You will also learn a lot of other information related to this problem. 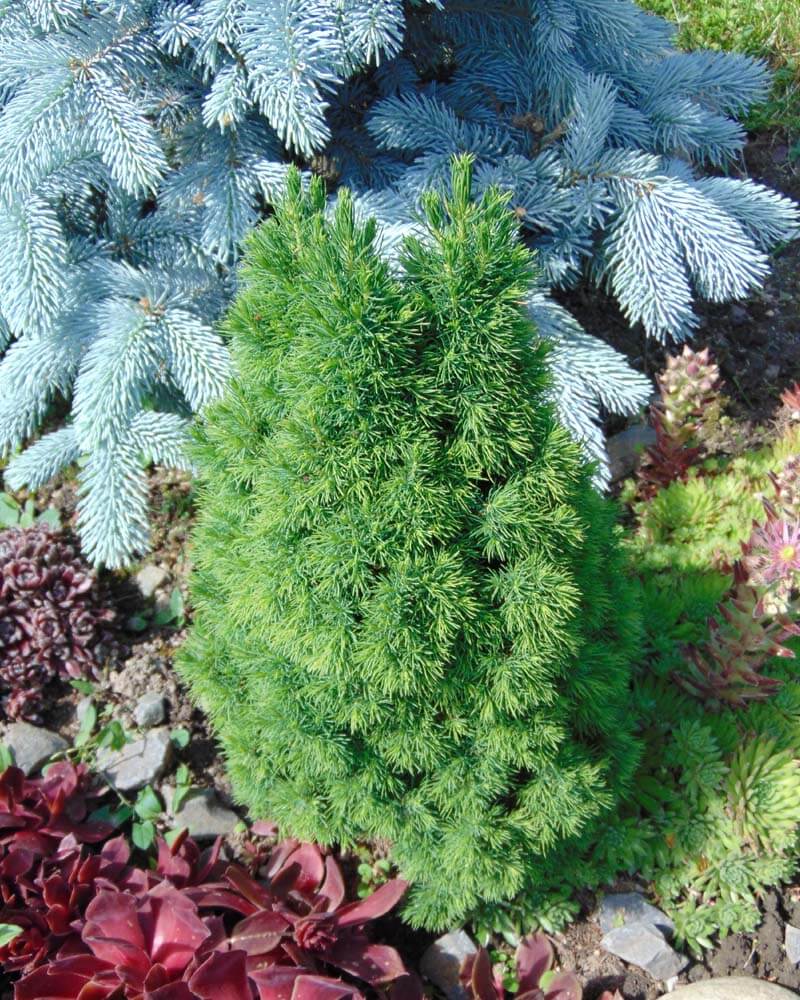 Planting Dwarf Alberta Spruce in full shade is strictly forbidden. If you do, it will stay alive for several years but will grow very poorly. The crown will become looser and looser every year. In addition, the spruce will lose its bright green color of the needles.

After a few years of such suffering, it will die and you will have to look for a replacement.

Because of the lack of light on the needles and branches will develop various fungal diseases. This is another factor why Dwarf Alberta Spruce can die when planted in full shade.

You will need to transplant it to a sunnier location to remedy the situation. This is best done in early spring or late winter when the tree is still dormant.

Dig it up very carefully so as not to damage the root system. Also, water it the day before transplanting with a sufficient amount of water.

Once you have dug up the tree, move it to its new location as quickly as possible. Plant it in a hole twice as big as the previous one without digging its trunk into the ground.

After replanting, place a garden umbrella over the spruce for 1-2 months to protect it from the harsh sun until it takes root. If young growths appear, the umbrella can be removed. 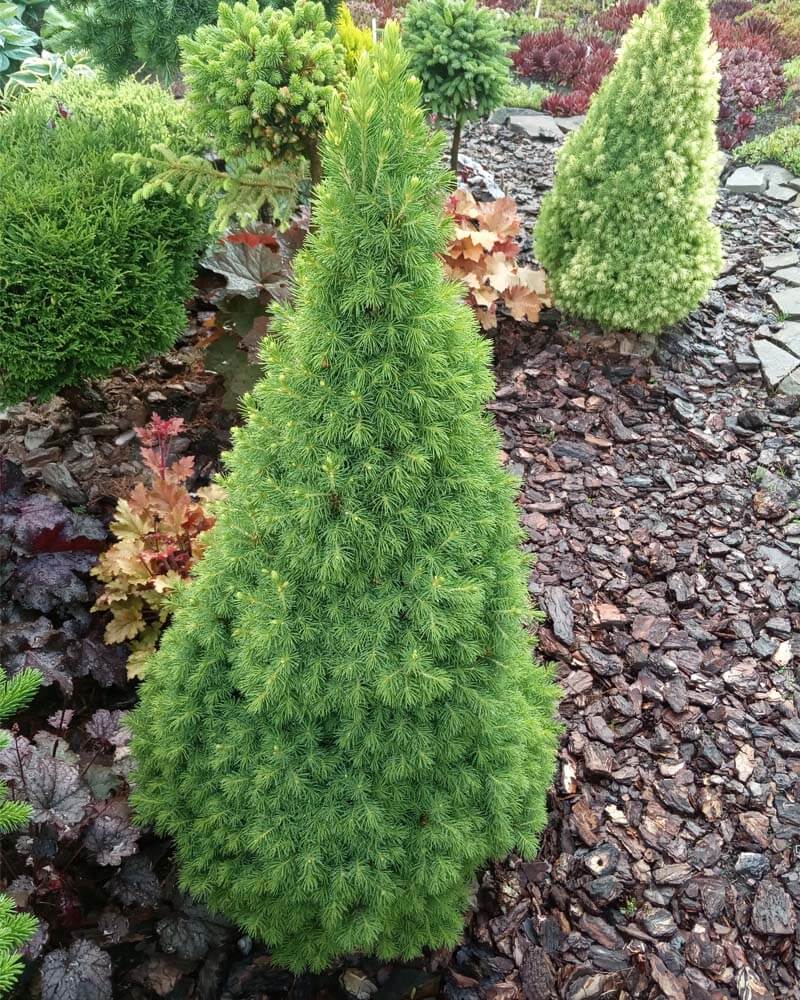 As for the partial shade, that’s another matter. If in the place where you plant Dwarf Alberta Spruce, the shade is only half the day, it will grow well.

Half a day of sunlight is enough for this spruce. The crown will be dense enough and there will be no problems with discoloration of the needles.

However, growing Dwarf Alberta Spruce in the partial shade has its own peculiarities.

First of all, it concerns diseases. In a place where there is shade half of the day is more humid. Under these conditions, pathogens are easier to develop. Also, diseases thrive when there is a minimum of sunlight.

From this data, you need to be more vigilant and constantly monitor the spruce needles. As soon as you see black spots on the needles or the needles turn brown immediately spray spruce with copper fungicide. But it is best to preventively spray 1-2 times a year with a multi-purpose fungicide.

The second thing to watch out for is watering. Avoid watering Dwarf Alberta Spruce if it is growing in partial shade as the soil dries out more slowly and there is a risk of over-watering.

All you need to do is water a newly planted tree in its first year, but only when the ground has dried out more than an inch. After that, the spruce will be able to get water out of the ground on its own.

What is the best sun exposure?

It is best to plant Dwarf Alberta Spruce in a location where it will receive at least 6 or better 8 hours of direct sunlight per day. The more light it gets, the thicker the crown will be and the brighter the needles will be. In addition, such a tree will be sick much less often.

The farther north you go, the more sun it needs. Conversely, the further south it is, the less sunlight it will need to thrive.

Also Dwarf Alberta Spruce can grow well in full sun all day. In this case, the crown will be as dense and lush as possible.

However, there is one pitfall here. In a very harsh winter or early spring, the sun can burn the needles while the tree is still dormant. This often happens in an open space where there are frosty draughts in addition to full sun.

If this happens in your area then it is better to plant Dwarf Alberta Spruce in a place where it will receive direct sun only half the day. Or you can protect it with cover material. 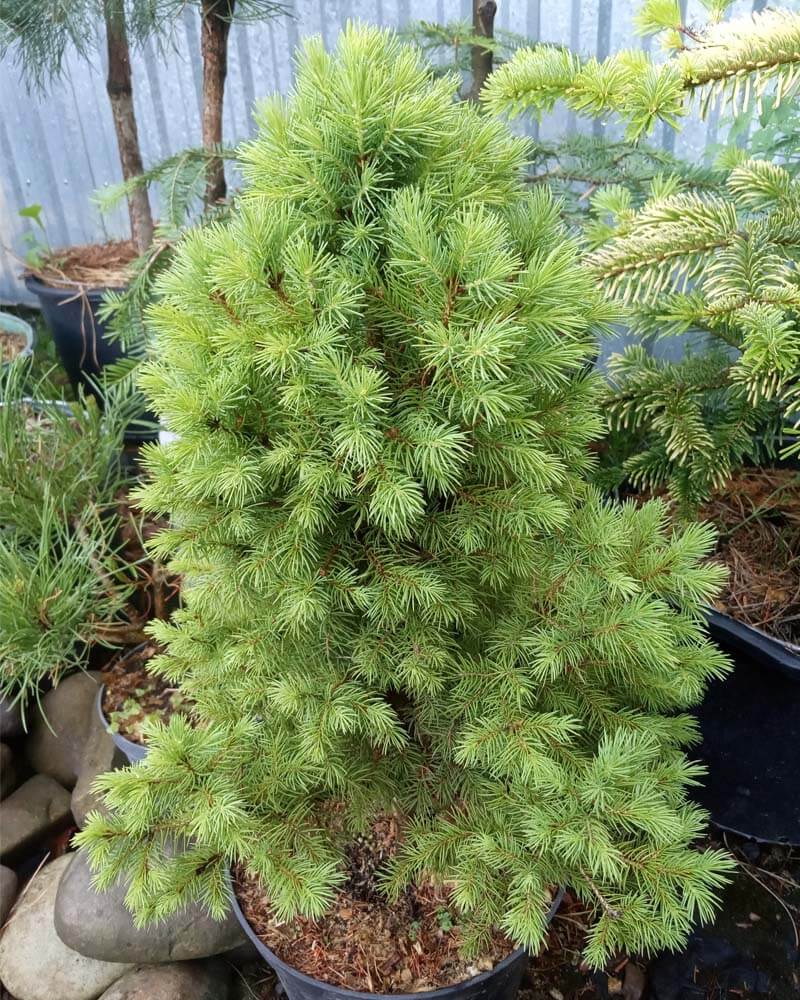 Dwarf Alberta Spruce is over-shaded by other plants.

It is very common for plants to shade each other while they may be planted in full sun. This is not uncommon in the case of Dwarf Alberta Spruce as it is small spruce and can be shaded even by a large perennial.

As a result, part of the crown will develop out of proportion to the rest. Moreover, in the place where the plants are touching, the needles may fall off. At the same time, the tree can receive sunlight throughout the day.

Another possible way to grow plants is the dappled sun. This type of lighting is available under the canopy of large trees with not very dense crowns.

Shade-loving perennials and some other plants grow best in dappled sun. As for Dwarf Alberta Spruce, it will not grow well in such conditions.

The first reason is that the sunlight that penetrates through the crown of the tree is not enough for the spruce. It will live a few years and die.

Another reason is that there is usually not enough moisture under big trees. This results in what is called the dry shade phenomenon. This is absolutely the wrong place for Dwarf Alberta Spruce.

Read more: How do you keep Dwarf Alberta Spruce healthy and thriving?