Blue spruce is a desirable element in the landscape design of many homesteads. Very often there are difficulties because of the large size of this plant.

Those were quick tips on proper pruning and you’ll learn more about that later in this article. Also, be sure to check out the Ultimate Guide to Growing Colorado Spruce. 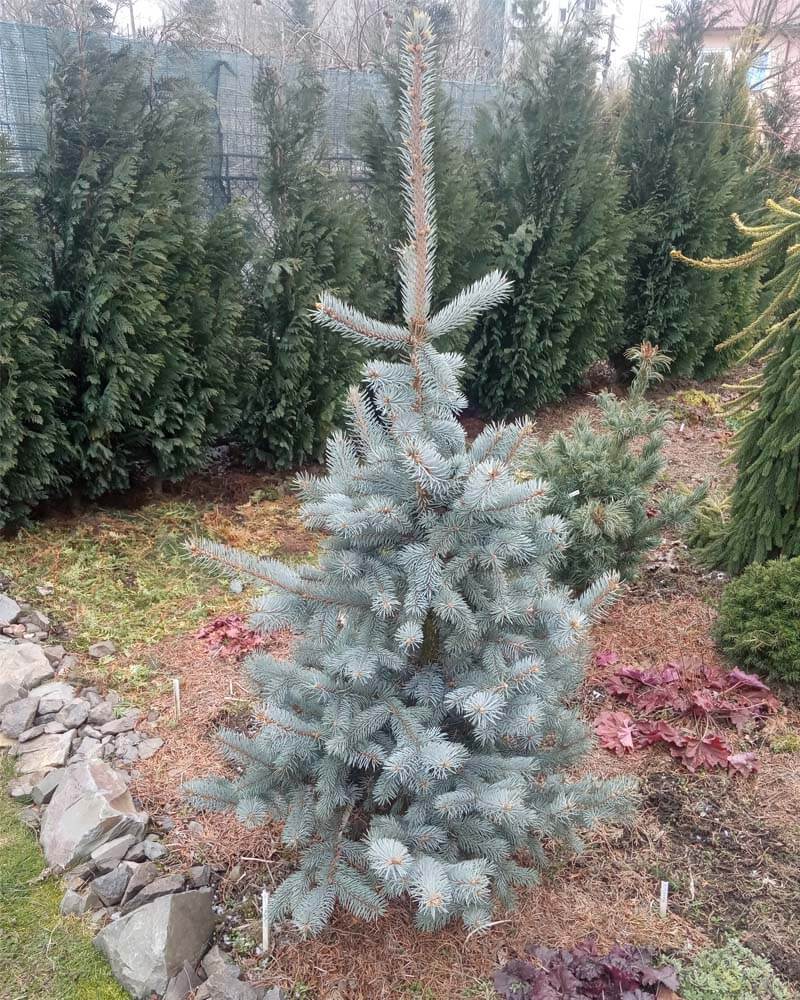 The best time to prune a Blue Spruce is early summer. You need to catch the moment when the young shoots are at their maximum length but not yet fully mature.

If you cut at this time you will get the desired shape of the crown for the whole year. In addition, more buds will appear on the shortened branches and next year the spruce will be thicker and lusher.

The second appropriate period is early spring. This is where you want to get the job done before the buds start to push in.

Avoid pruning while young growth is forming. Depending on the climate and weather, this is between April and July.

You should also avoid pruning Blue Spruce in the fall and even less so in the winter. This is because pruning will leave wounds open for the winter which can lead to unpleasant consequences.

As for dead wood, you can remove it at any time of year.

The first rule of pruning is that young shoots should not be cut more than two-thirds of their length. There must be a few buds left on them. Otherwise, the shoot will die.

There are several types of pruning depending on your goals. You can use all of them together or individually, but let’s look at them in order. 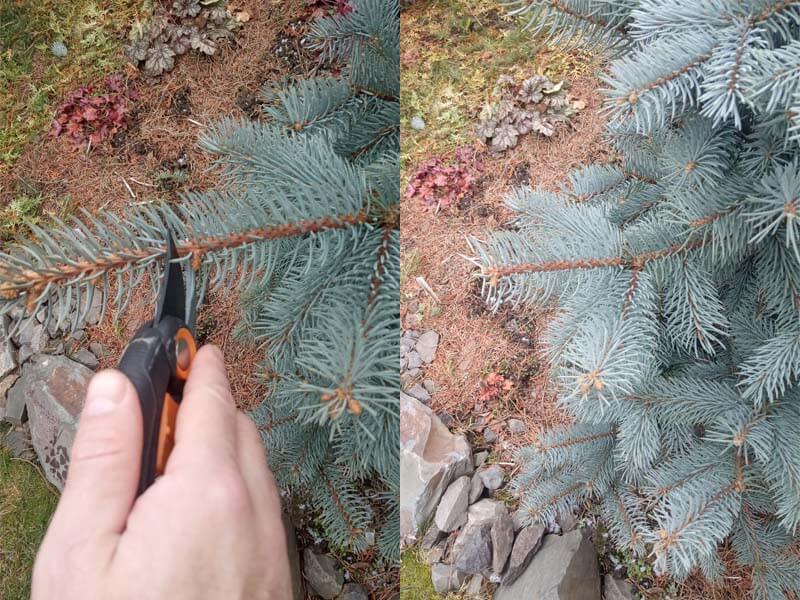 This is the most common type of pruning. The idea is to make the spruce more regular and slightly smaller. This is because many side branches spoil the correct conical appearance of the crown.

To trim properly, stand 2-3 feet away from the tree and look at its silhouette. Any branches that protrude beyond the correct shape should be trimmed. This is usually the case with one-year shoots.

As I said before it’s best if you have a few buds left on the shoot. But sometimes some shoots need to be removed completely to make the spruce more regular.

The ideal thing is to shorten the annual shoots every year and gradually give the Blue Spruce the desired shape. 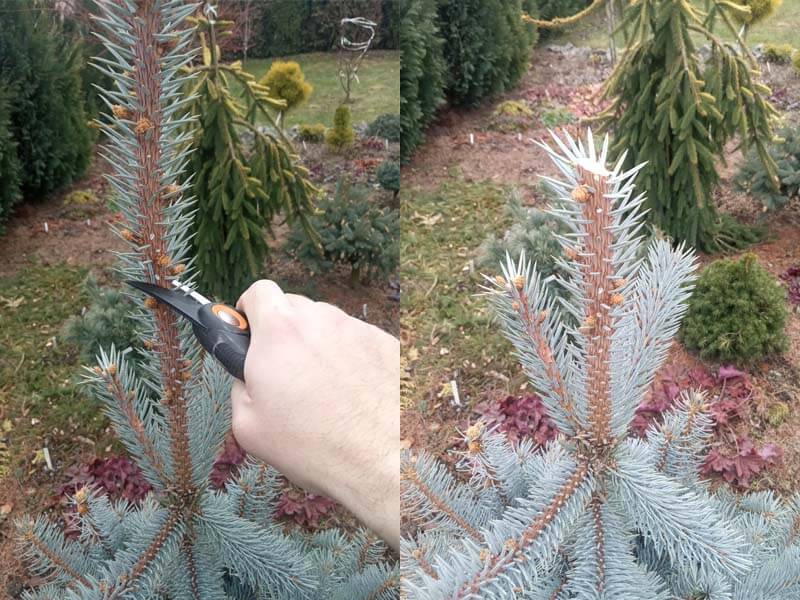 It is often necessary to shorten the central axial shoot of a Blue Spruce. This usually happens because it grows much faster and longer than the other branches. As a result, the spruce becomes very elongated and narrow.

In addition, shoots that are located on the sides of the axial one are also usually longer than the rest of the branches. Some of these shoots compete with the leading one. Sometimes a Blue Spruce can have two leading shoots.

You will need to cut back the leading shoot by a third or half of its length. Be sure to leave a few buds on it to keep it in the lead. Cut at an angle. This prevents rainwater from being trapped in the wound.

If there is more than one leader, leave only the thickest one. Remove the others completely by cutting them off where they are attached to the trunk.

Removing the lower tier of branches is a fairly common type of pruning for Blue Spruce. This practice has many advantages, the first of which is reducing the size of the spruce.

This will allow you to move more freely in its vicinity. And it will make room under the tree for shade-loving perennials.

In addition, by removing 1-2 lower tiers of branches you will give the spruce a better air exchange and consequently a better resistance to fungal diseases.

If you need to do something like this, cut branches in close proximity to the trunk. But leave a quarter or half an inch of the branch to avoid damaging the trunk. You can read more about this type of trimming in the article Trimming bottom branches of Blue Spruce.

During the growth process, branches sometimes get damaged and then die off. This happens most often with young, not yet mature shoots. It is also common for branches to drop their needles and shrivel due to disease. Such branches should be removed immediately.

Try to cut the deadwood as close to the living tissue as possible. But leave half an inch of a dry branch to avoid damaging the living part.

All cuttings should be removed from the yard as they may contain pathogens. Do not compost it under any circumstances. 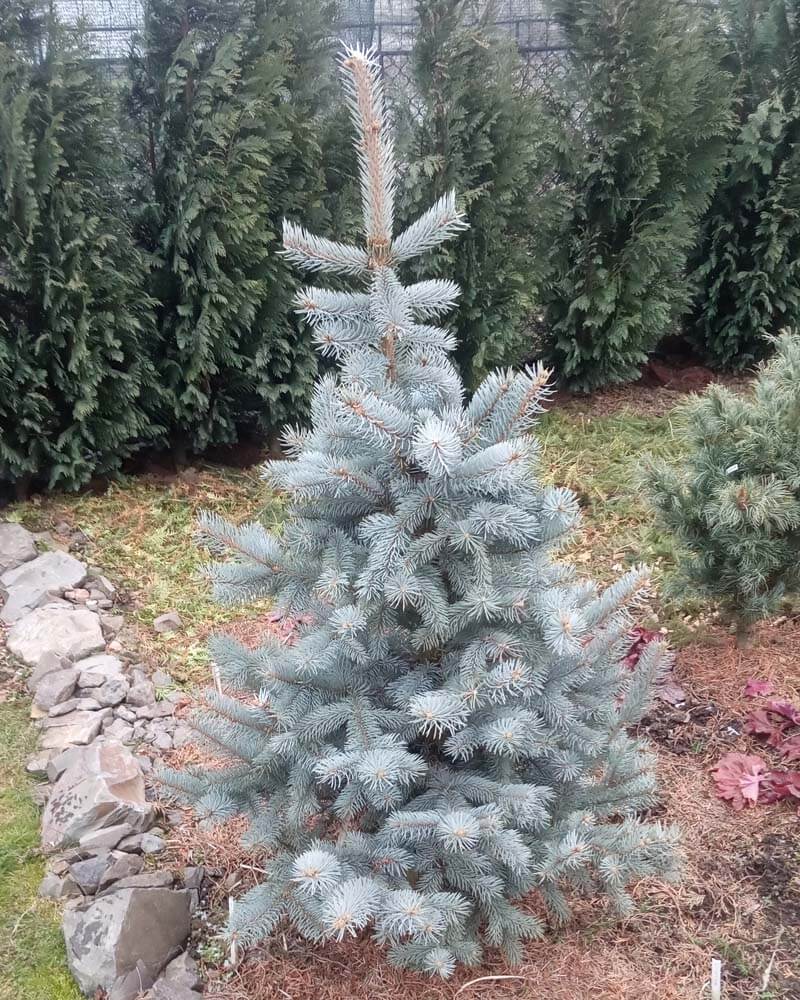 Always use only clean, sharp, and disinfected tools for pruning. Otherwise, wounds can take too long to heal and infection can occur.

Bypass pruners and shears are usually sufficient for most cases. A saw or loppers may be needed when trimming thick branches. Use only quality tools and the results will be neater.

After pruning, do not water the spruce for 1-2 days. This is to avoid moistening the wounds. The spruce will cover the wounds with the resin it releases on its own.

It will also be an advantage if you spray the spruce with a multi-purpose fungicide to avoid infestation.

This is especially true if you have cut off large branches near the trunk. This results in large wounds that will take a long time to heal. If you spray these wounds with fungicide, you will reduce the chance of trunk rot to a minimum.