The lack of broad foliage makes conifers very interesting to look at. But with them, as with other trees, problems can arise.

Dwarf Alberta Spruce does not drop all its needles at once. The life cycle of each needle is several years and it stays on the branches all that time.

Only a small fraction of the old needles fall off each year. Dwarf Alberta Spruce usually loses less than 5% of its needles per year. It is the old needles that are located inside the crown.

If your Picea glauca Conica has lost more than 10-20% of its needles on one side for example, then you are in trouble. There are also cases where some of the branches can drop off the needles and dry out, this also indicates a problem with the tree.

Below you will find out the most common reasons for needle loss and how to fix them. 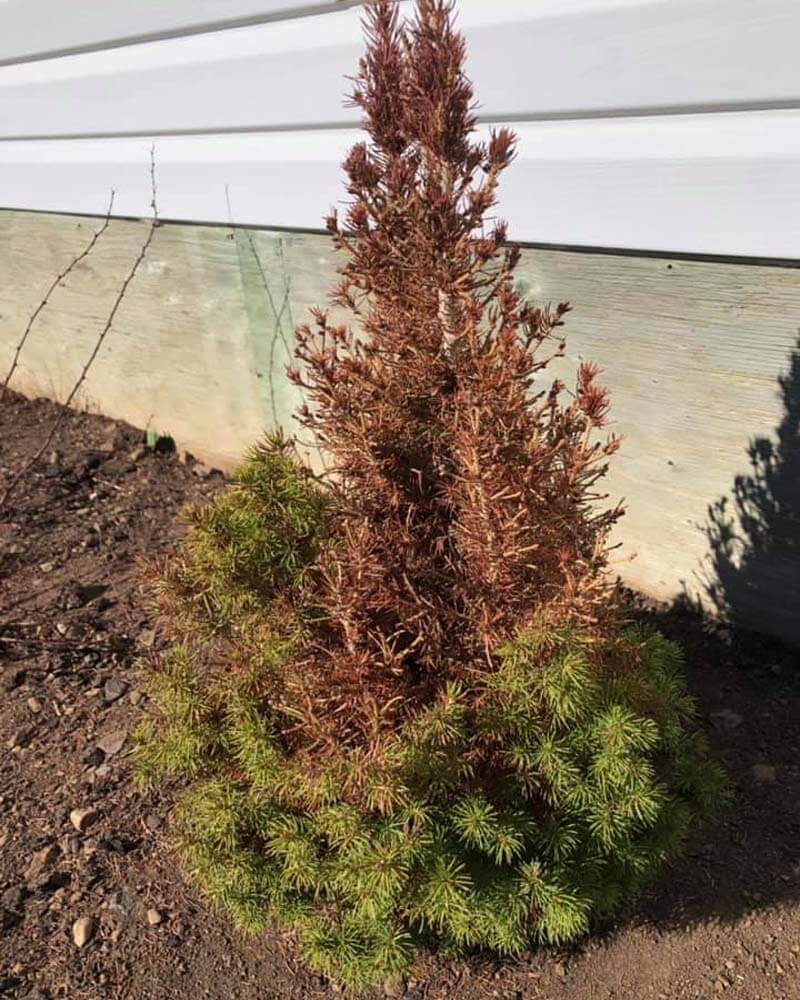 The first reason Dwarf Alberta Spruce can drop its needles is winter burn. This usually happens because of an underdeveloped root system or because of the strong winter sun.

The roots are not able to deliver enough water to the needles and they dry out. In this case, the needles will burn on the south side of the crown.

It also happens very often due to strong winds in winter. Frosty winds can quickly dry out the needles and they will fall off.

To avoid this, do not plant Dwarf Alberta Spruce in full sun all day. Instead, provide it with a few hours of direct sunlight in the morning. Also, where the spruce grows it should be protected from the wind.

Wrap the spruce in burlap or plant protection material for the winter. Be sure to mulch the surface around the tree with a thick layer of organic material.

The next cause of needle loss is root rot. In most cases, root rot is caused by overwatering. If it is too wet around the roots, they will soften and rot more easily.

Sick roots are not able to supply water properly and the tree gradually begins to drop its needles.

The first thing to do to remedy the situation is to stop watering too often. A well-established Dwarf Alberta Spruce needs almost no watering.

If there are still needles on the branches, shade them if the sun is too strong. Very often the tree can recover from root rot on its own, although it may take several years.

Spider mites are sucking pests that settle on the needles and suck the juices out of them. They spread most strongly in dry weather.

Mites usually spread on the lower branches closer to the center of the crown.

Look closely at Dwarf Alberta Spruce and if you see cobwebs between the needles and small creatures, they are spider mites.

Wash them off with a stream of water from the hose. Then spray the spruce with a water solution of horticultural oil. Repeat this several times.

Lack of water can also cause the needles to fall off. Newly planted spruces are most susceptible to this because their root system is underdeveloped.

If you did not water Dwarf Alberta Spruce in the first or second year after planting, the needles may fall off. This also usually happens during summer heat and drought.

For the first two years, water the spruce after the soil has dried 1 to 2 inches. Use at least 2 gallons of water. The entire root system should get water.

Be sure to mulch the surface with pine bark 1-2 inches thick. This will prevent the soil from drying out quickly. Do not cover the trunk of the spruce with mulch as this can lead to trunk problems.

Incorrect transplanting can cause not only the Dwarf Alberta Spruce needles to fall off but also its death.

To avoid transplant shock, move the spruce only in early spring or fall. Avoid digging it up in dry and sunny weather. Instead, give preference to a cloudy day.

Water the spruce well a few days before transplanting.

When planting the tree in its new location, don’t dig the trunk an inch deeper into the ground.

After planting, shade the spruce with a garden umbrella for several weeks or even months. This is especially true for the summer months.

In the first year after planting, do not let the soil dry out more than 1 inch. Mulch the spruce with pine bark.