If a Japanese maple is transplanted in the wrong season, too much of the roots are removed, it’s not watered in time it can experience transplant shock. To minimize transplant shock move it in autumn/winter, water it for the first 3 months, and use a root stimulator.

Also, be as careful as you dig it up to keep as much of the roots as possible. Below I will cover the best approach to transplanting a Japanese maple, as well as, how to reduce the effects of transplant shock on it. Be sure to read this article for more information as well. 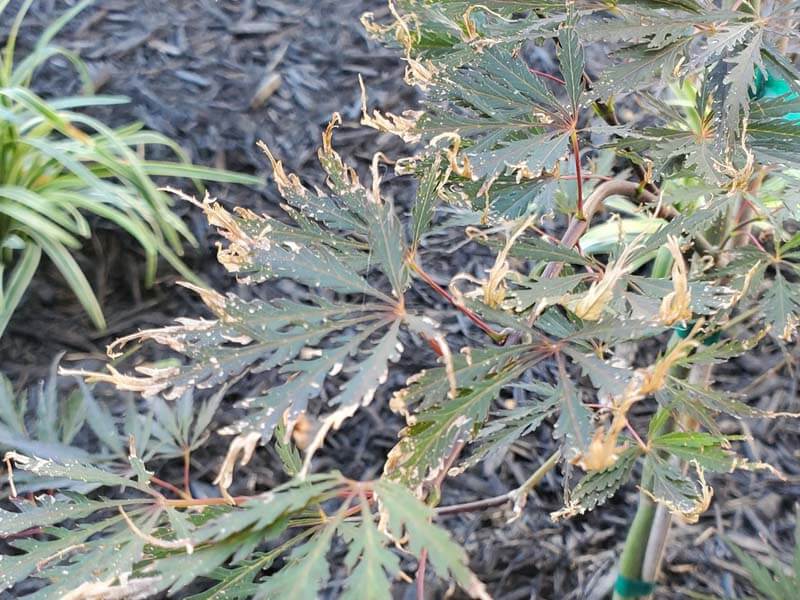 Transplant it in mid-autumn to winter

Avoid pruning it while transplanting to conserve its energy

Some botanists are of the opinion that you should prune a tree, and in this case a Japanese maple when transplanting it. Whereas, others say you should not prune it.

The reasons for pruning are that it’s almost unavoidable for a plant/tree to experience some root damage during transplanting. Therefore, the rationale is that the smaller rootstock is better able to sustain a smaller plant.

In my opinion, provided you’re careful enough when digging it out to not damage the roots too much, you shouldn’t prune it. And if you are going to prune it, wait until the next autumn/winter once it has recovered from being transplanted. 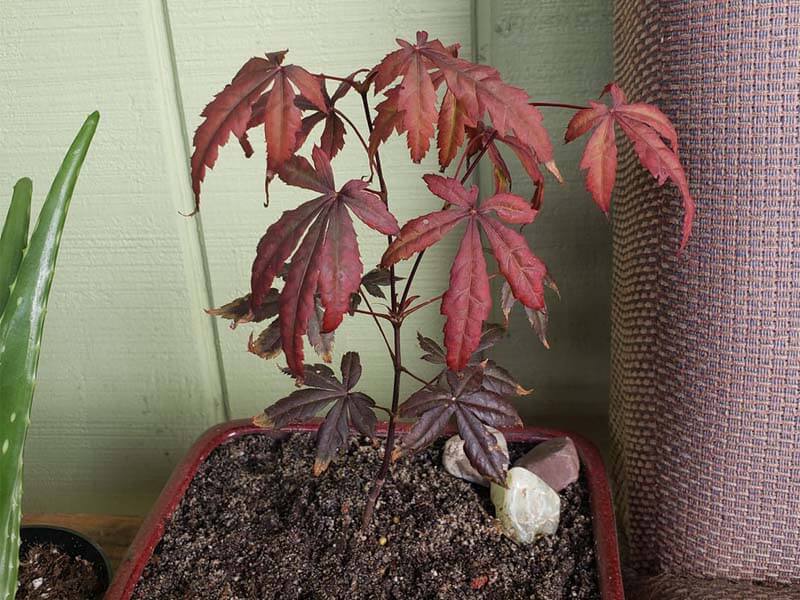 Keep as many of the roots intact as you can

Ideally, all of the roots will be kept when digging it up. But, due to the nature of the way roots grow some root damage will virtually always occur. Depending on where your Japanese maple is planted you may also need to trim some of the roots with a handsaw or secateurs.

For example, if it’s next to a concrete pavement where the roots are growing underneath the concrete. Or if it has one or a few long horizontal roots that are longer than 6 feet (2 meters) from the base of the tree.

In these cases, it’s perfectly fine to trim the roots. But, when digging it out take your time, and use your hand to push aside the dirt to identify where most of the roots are.

Replant your Japanese maple as soon as possible

The more time that your Japanese maple spends out of the soil the more it will experience transplant shock once it’s replanted. The reason is that it has adapted itself to the soil, and so it will immediately begin changing itself based on its surroundings.

Providing more time means it will adjust to not being in the soil and then after it’s replanted it will need additional time to adjust to being in the soil. This delay causes more stress to the plant. Therefore, once it’s dug up you want to aim to replant it as soon as possible. Ideally within an hour or two. Or, however long it takes to dig and prepare the new location for it. 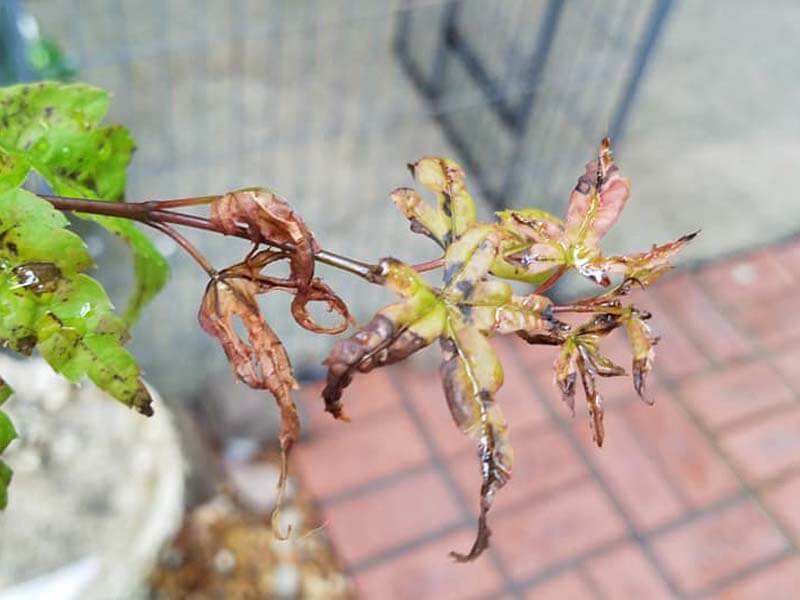 Plant it in the partial shade, not full shade or full sun

Japanese maples can do OK in full sun. But, they struggle in full shade. If you’re putting it into a pot until it gets larger it’s much easier to move it to a suitable spot. However, for planting in the ground choose a spot that’s partially shaded to reduce the impact of transplant shock.

Water your Japanese maple regularly for the first 2-3 months

Japanese maples are quite drought-tolerant when fully mature. However, when they’re still young experts recommend watering them twice per week. This same timeframe should be used when a Japanese maple has been transplanted.

When a Japanese maple doesn’t get the water it can survive but it does put a strain on it. Due to the stress of transplanting it, you want to reduce as much stress on your Japanese maple as possible. This will lessen the effects of transplant shock. Therefore, aim to water them twice per week for the first 2 to 3 months after you’ve transplanted them.

But, vary this based on how much rain you get. For example, if it rains heavily for a day or two you shouldn’t need to water it that week provided it isn’t incredibly hot. 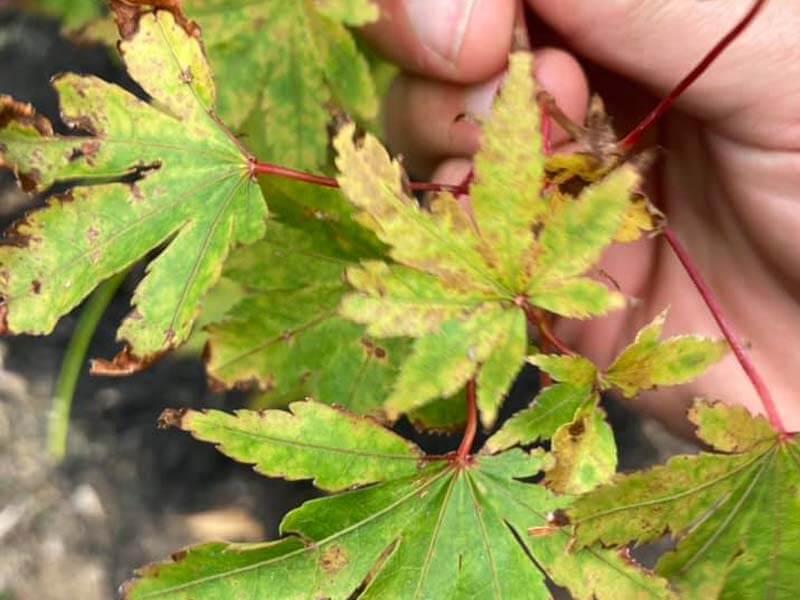 Japanese maple leaves have yellowed due to transplant shock.

Apply a root stimulator to help the roots recover faster

Root stimulators are well known in the gardening space. These are specially formulated liquids that encourage root growth. You mix a small amount with water based on the manufacturer’s instructions and pour it around the base of the plant.

Mulch such as hay, grass cuttings, wood chips, or bark should be placed around the base of the tree. These provide a very hospitable environment for beneficial insects. As the mulch decomposes nutrients that are stored in it seep into the soil and make it much healthier.

It also provides a cover from direct sunlight which can dry out the surface of the soil. When you water it, the water doesn’t get as deep down into the soil. This provides less water to the tree overall. And while it’s experiencing transplant shock this water is very much needed.

Therefore, apply a layer of mulch. But, don’t pile it up too high around the trunk of the tree as this can confuse the tree into thinking the soil level is higher than it is.