Today we will compare two wonderful trees that are widely known among fans of this kind of plants.

The main difference between Red Dragon Japanese Maple and Bloodgood Japanese Maple is size. Red Dragon is a dwarf tree and more suitable for small compositions. Bloodgood, on the other hand, is a full-fledged tree with a wide canopy.

Also, Red Dragon Japanese has much more split leaves than Bloodgood. All the differences and similarities between these two varieties will be described in detail in this article. Be sure to read How to Care for the Japanese Maple for the Beginner. 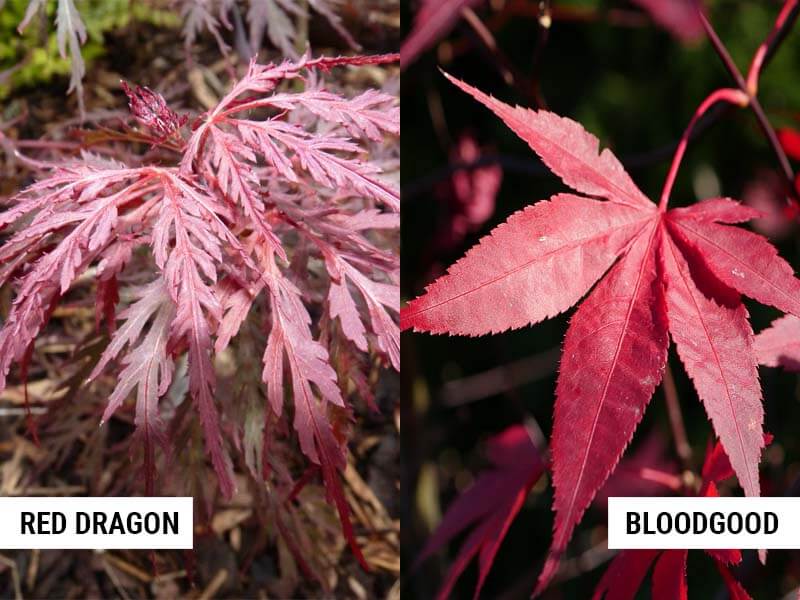 Bloodgood is a large enough tree that at maturity it can reach 25 feet in height and width. When selecting it, you should be aware that it will need enough space to develop.

Red Dragon, on the other hand, is a dwarf Japanese maple. Usually, such varieties are obtained by propagating natural mutations from big maples. Its size at maturity usually does not exceed 8 feet in height and width.

It follows from the size that Bloodgood needs more space. Plant it at least 15 feet away from other trees or the house.

Red Dragon needs much less space. The distance between it and other objects should be about 4 feet.

The second aspect is the growth rate. Red Dragon is a slow-growing tree that grows about half a foot a year in both width and height. The annual growth of Bloodgood exceeds one foot and under ideal growing conditions can reach two feet.

This means that if you want a large tree quickly, Bloodgood is your best bet. Red Dragon, on the other hand, is a good choice for those with a small garden and who appreciate dwarf forms. 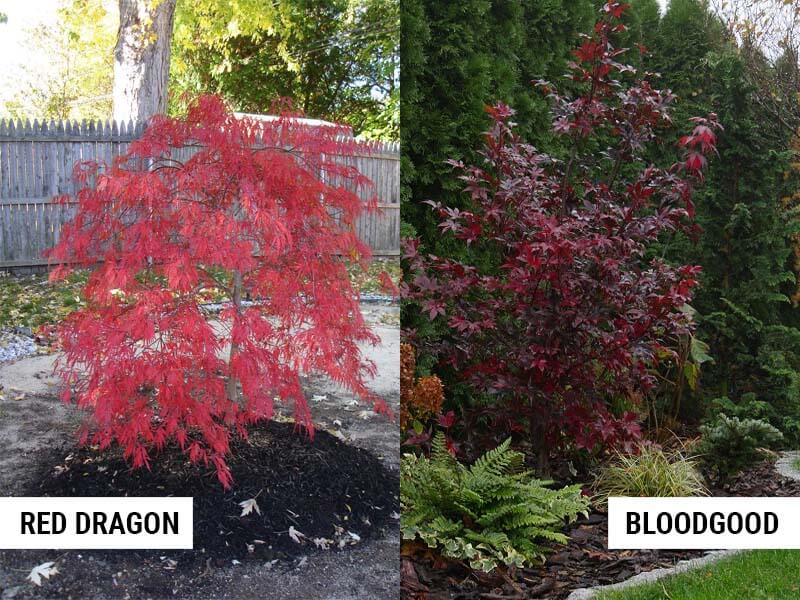 In addition to size, the two maples differ in shape.

Red Dragon has a more mushroom-shaped crown. It spreads equally in width and height. But its branches tend to sag, so it looks broader than tall.

As a result of Red Dragon’s characteristics, you can have a beautiful weeping dwarf maple with a very dense crown. It is primarily valuable as a weeping tree for rock gardens or small flowerbeds.

Bloodgood on the other hand is a more upright growing maple. This is especially pronounced in its early years. At first, this maple produces almost upright structural branches, and only over time does the crown expand and thicken.

The value of Bloodgood is in its canopy. It can provide sufficiently good shade under which shade-loving plants can be grown above all. It can also be used as a resting place during hot summers.

A small advantage of Red Dragon is that it is better suited to growing in a container. Thanks to its compact size you can keep it in a pot for many years.

The next significant difference is the shape and size of the leaves.

Bloodgood has larger leaves which are usually divided into 5-7 lobes. The lobes are large and the cuts are quite narrow, resulting in a leaf plate that is quite large.

Red Dragon, on the other hand, has much more heavily cut leaves. The incisions are deep and wide. The leaf plate is almost absent, the leaf looks as if composed only of veins.

Moreover, the lobes are also split into smaller lobes, which in turn have serrations. All this makes the Red Dragon leaf much more interesting and unusual.

This is one of the features for which it is very highly valued. Some people see the shape of a flying dragon in its leaves. This is what became the name of this variety.

Add the mushroom-shaped dwarf weeping growth habit to the leaves and you have a great collectible specimen, which Red Dragon really is.

Bloodgood’s leaves, on the other hand, are fuller and more visible from afar. The tree looks interesting in its own way.

In general, the color of the leaves of both maples is very similar. However, there are differences, albeit minor, here.

With an equal amount of sunlight, the Red Dragon will have dark red or almost purple leaves. This color will last from spring to midsummer. Then the leaves will become less bright and even with a slight greenish tint.

Bloodgood on the other hand has more red leaves. Of course, it also has a slight purple tinge, but it is much less pronounced. In the second half of summer, it too will lose its saturation of color and become paler.

Red Dragon has an interesting feature. The lower part of its leaves has an orange hue, which makes it almost spiritually colored. This is definitely an ornamental advantage over its competitor.

The first thing that needs to be mentioned here is watering. To be precise, it’s overwatering. Both maples do not tolerate too frequent watering or poorly drained soil.

To be successful, you need to keep an eye on the moisture around the roots and only water when the soil is 1 to 2 inches dry. This watering is needed for 2 years after planting, then the tree will take root and be able to provide its own water.

Avoid planting near areas where water flows or accumulates. Also, make sure that the soil is well-drained, and if necessary improve it with organic matter before planting.

A second similarity is a need for sunlight. They both need at least 4-6 hours of direct sunlight per day. In this case, the leaves will have a brighter color.

As for fertilizer, you should use granular fertilizer once a year. Make sure it contains no more nitrogen than 15, it should be on the label. Too much nitrogen will turn the leaves green.

Both maples should be mulched with organic matter. This will prevent the soil from drying out quickly and weeds from germinating. In addition, organic mulch is an excellent fertilizer.

Also, both varieties are equally resistant to various kinds of diseases and pests. To keep maples healthy, use fungicide against diseases, and insecticidal soap against pests.