These days you can find a very wide assortment of plants and some of them are really unique. Today you will learn about the most popular varieties of Japanese maple with red bark. 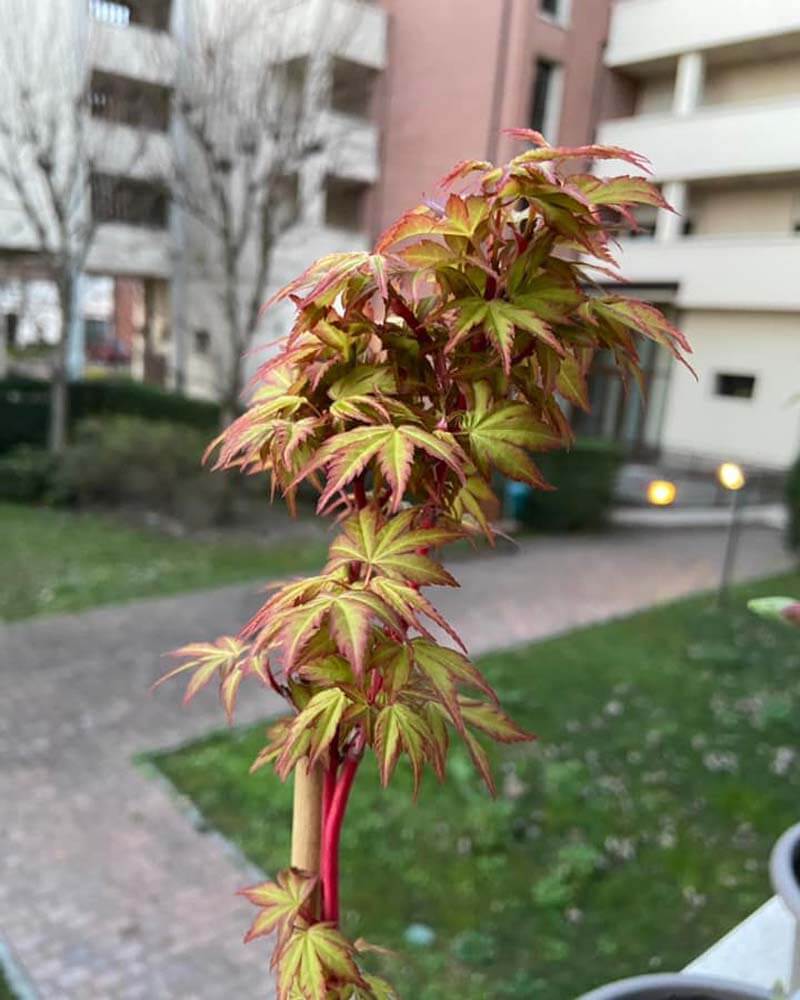 Sango Kaku is probably one of the most famous Japanese maples with red bark. And the color saturation is very high, so you can count on a very good winter interest.

But despite the amazing bark this variety has very vigorous bright green leaves in spring. By summer the color fades a bit but the contrast of foliage and branches remains.

The second period when Sango Kaku becomes very unusual is in autumn. This is when the leaves turn a fiery yellow, which also looks great against the red branches.

It can grow up to 25 feet tall and you have to take care of the space for it in advance. Plant Sango Kaku at least 15 feet apart from other plants.

Read more: How do you maintain a Japanese maple tree in good health? 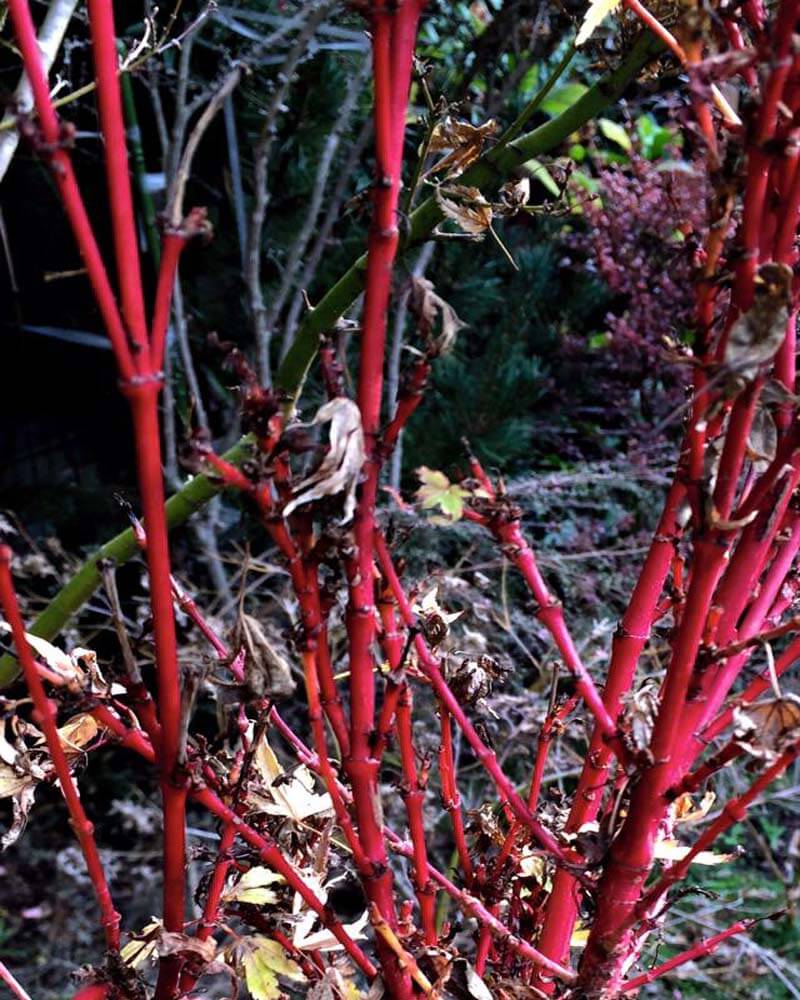 The Cupid variety was found as a somatic mutation on Sango Kaku Japanese Maple. From its parent it received a very bright red bark that sometimes turns orange.

The crown shape of this maple is upright. The growth rate is slow, but depending on growing conditions and care, it may accelerate slightly. Cupid is usually no more than 5 feet tall and no more than 3 feet wide by the age of 10.

The leaf is divided into several large lobes. The color of the foliage is bright green early in the season. Throughout the year, the color varies in various shades of green but turns yellow-orange in the fall. 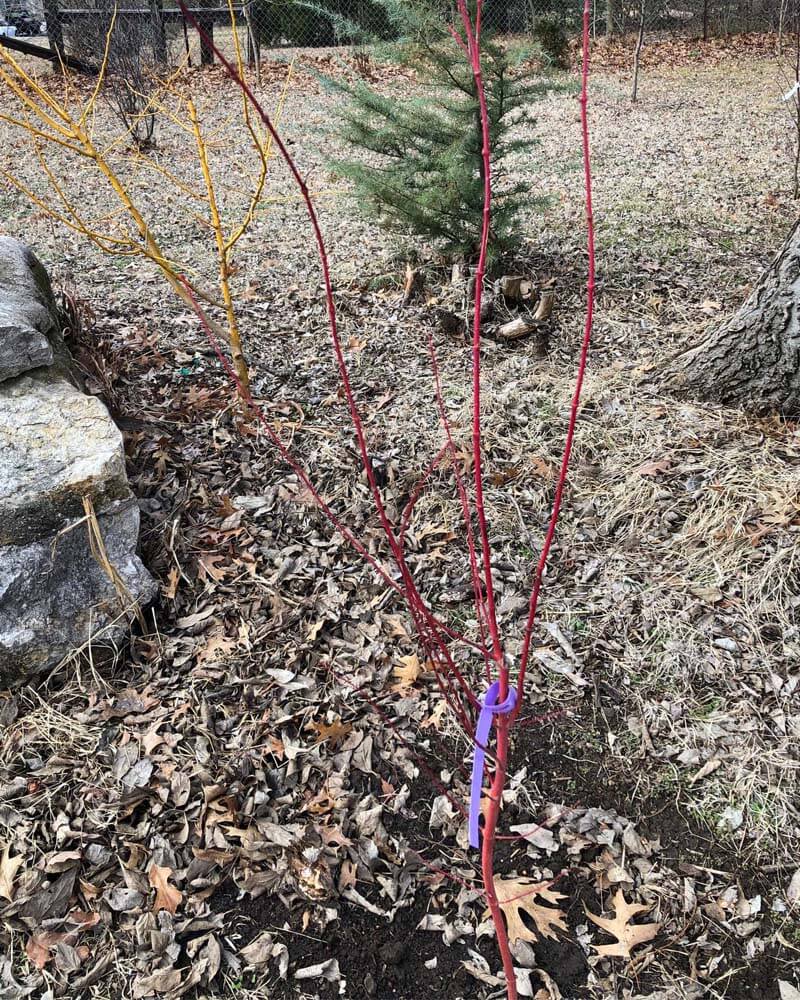 Sir Damon is a new variety of Japanese Maple that has recently been acquired. It is characterized by the fact that the young branches are very bright red and the old wood also has a red tint.

It is quite a compact maple that after 10 years of cultivation can reach a height of 9-10 feet and a little less in width. That means it can be grown in a small garden. The growth habit is upright with little branching to the sides.

The leaves in early spring are green with a slight purple tint. Also, the leaf edge and leaf petioles can be slightly purple, which makes the maple even more ornamental. 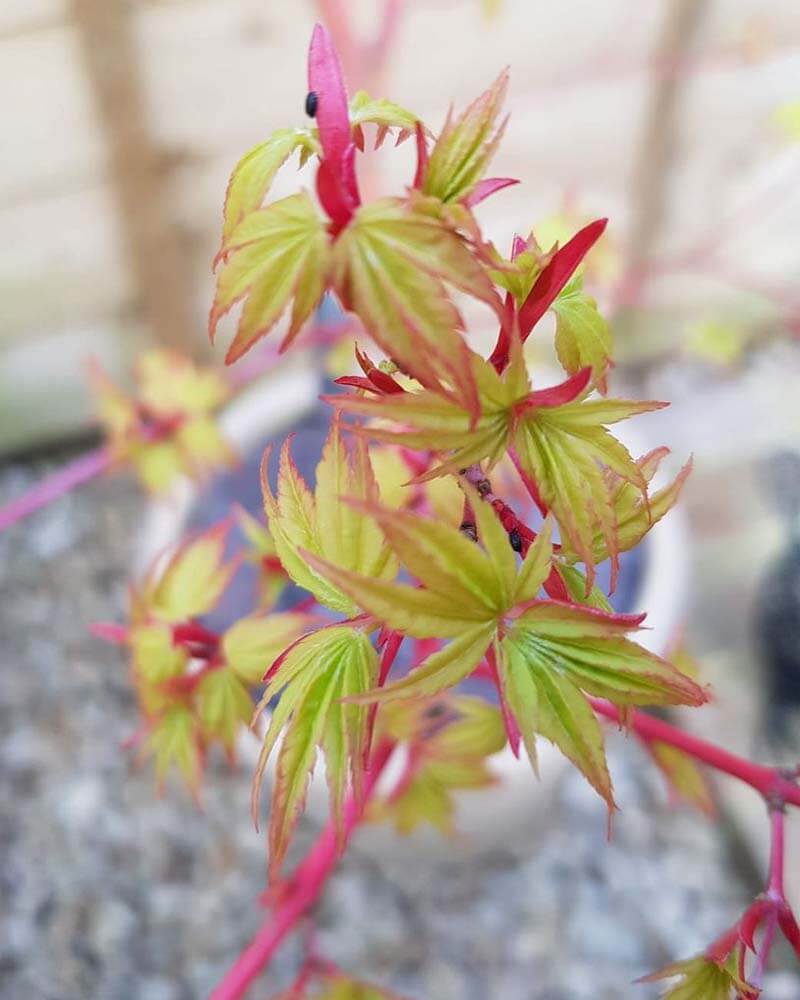 Red Wood is a maple that was found in the wild as a natural mutation. It has a red bark that adds to its value at any time of year, but it is especially noticeable in winter.

The leaves of this tree are quite large and usually divided into 5 lobes. The lobes are slightly serrated, which makes the leaf more aggressive in appearance.

The color of the leaves is a deep green throughout the growing season. In late summer or fall, the leaves turn a bright yellow color that has a striking appearance against the red branches.

As for the size, it is a fairly compact maple that reaches 6 feet in height after 10 years. It has an upright growth habit. 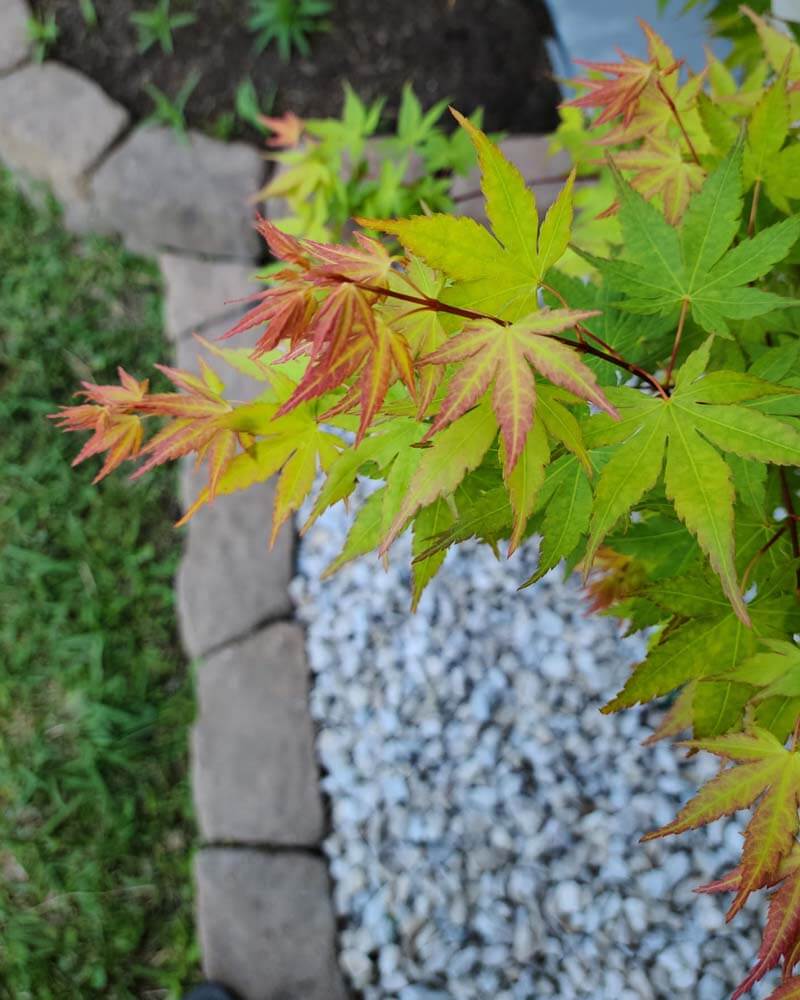 Winter Red is a fairly rare collectible Japanese maple with many advantages.

The first advantage is of course the red bark, the color intensity is very high. This is especially true of the young branches. You can fully appreciate the beauty of the bark only in winter against a background of white snow.

The leaves of this maple have 5, rarely 7 lobes. The color is green with a slight lemon shade. But what is more important is the red edge of the leaf. It looks really special.

It is a dwarf variety. At 10 years of age, it is less than 5 feet tall. The growth habit is upright but strongly branched.

A slight disadvantage of this maple is that it is not very hardy. It can only be grown from zone 6 in the north. This means that some people in the U.S. will not have it available. 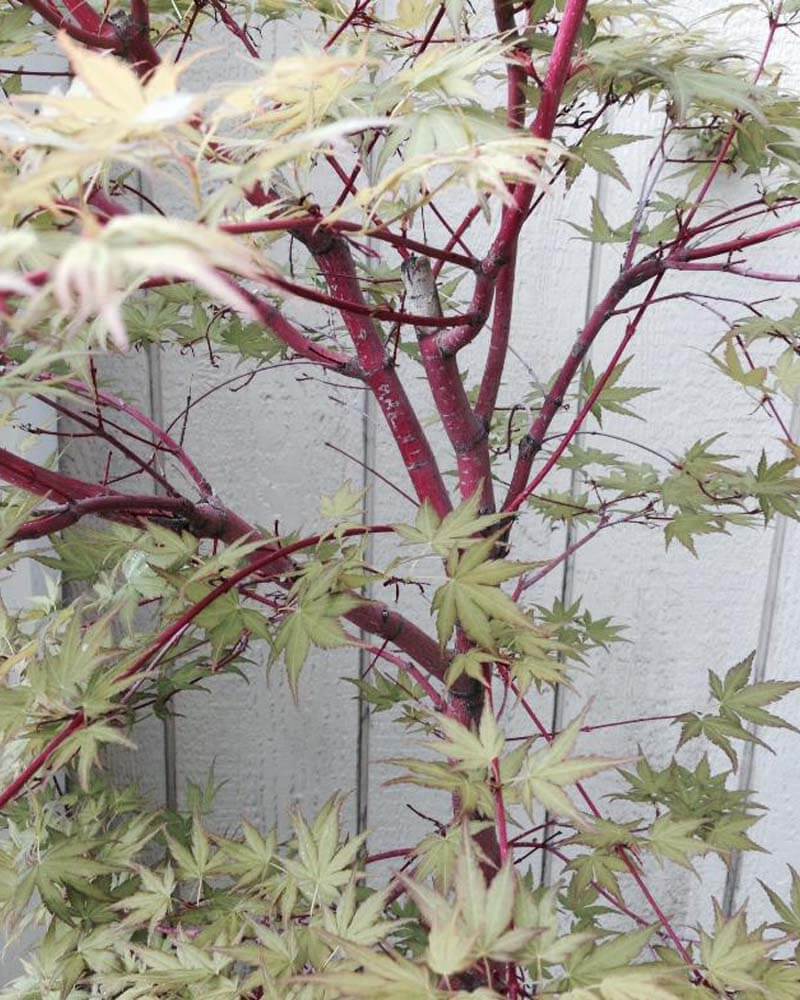 Beni Kawa is another Japanese maple with red bark and green leaves. This is complemented by bright red flowers that appear in spring. All this makes it a unique variety.

Excellent frost resistance allows it to grow from 5 to 9 zones. This means that everyone can have this tree in their garden.

Widespread popularity is facilitated by its compact size. By ten years of age, this Beni Kawa reaches 10 feet in height. So it can even be grown in an urban area.

In terms of care, it is a little more sensitive to moisture. So make sure it is well-drained when planting and do not water until the soil around it has dried out 1 to 2 inches. 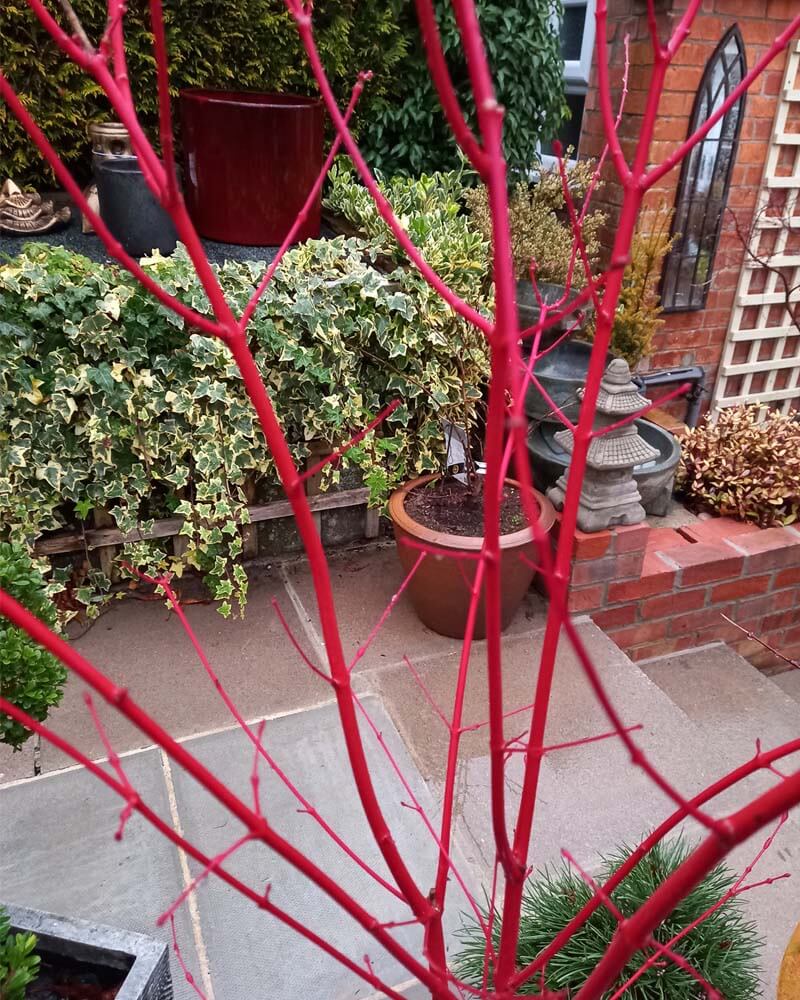 Winter Flame is another red-barked Japanese maple. Its peculiarity is the shape of its leaves. They are slightly twisted and the tips of the lobes sometimes point in different directions.

In addition to the shape, the color is also interesting. This variety has green leaves with a lemon-yellow hue. All this makes it very delightful to look at.

But this is not the end because the leaves turn a yellow-orange color in the fall. This is the second period of enjoyment for this variety, followed by winter, which is the third period.

Another advantage is its very compact size. At 10 years of age, Winter Flame will be no more than 3-4 feet tall, which means it can be planted almost anywhere. 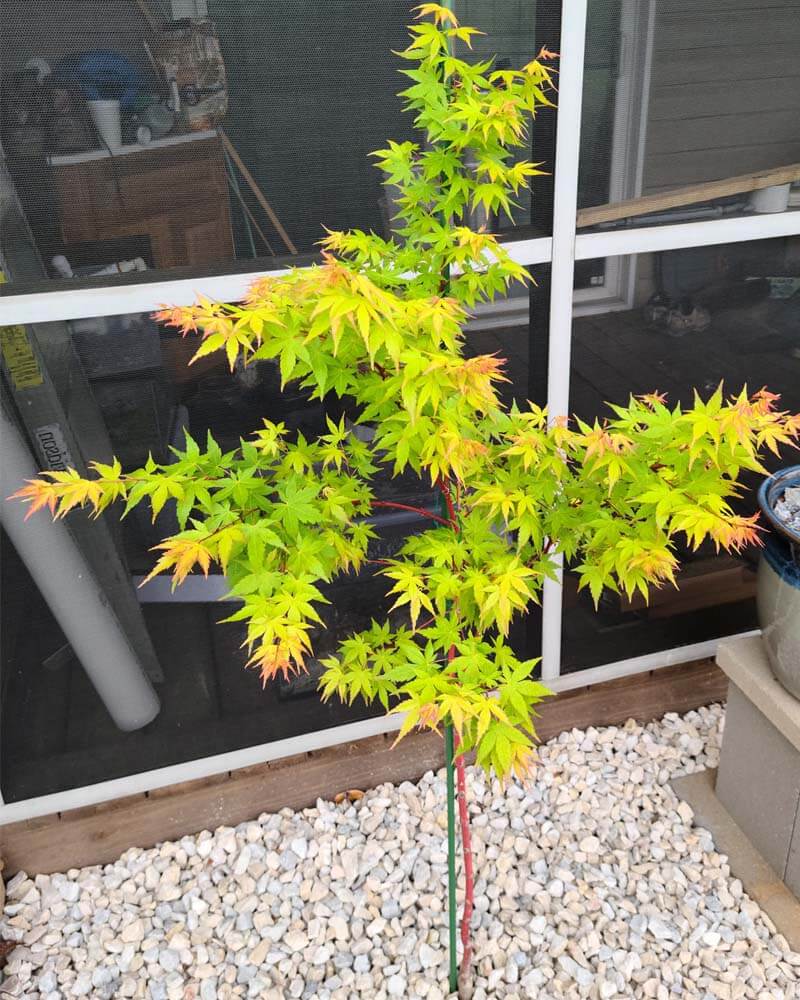 Baton Rouge is a rare variety of Japanese Maple, not least because of its red bark and amazing leaves. Another advantage is its excellent heat tolerance.

It originated in Texas, which is why it can tolerate southern climates very well. Even when planted in full sun, it will do just fine.

The leaves of this variety are larger and have narrower lobes. The leaf is cut deeper than other similar maples. The lobes are also quite noticeably serrated. The edge of the leaf often has a reddish tint.

It is a relatively small maple in size. By ten years of age, it reaches about ten feet. This makes this variety suitable for most yards. 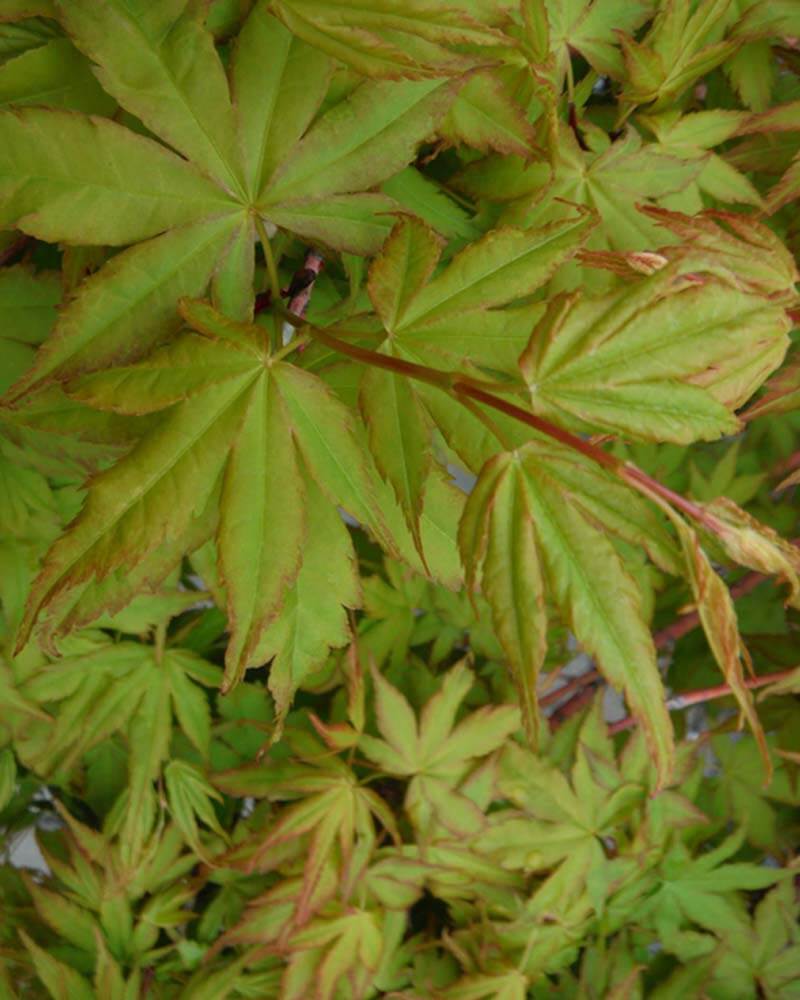 Corvallis Broom is another descendant of the famous Japanese maple Sango Kaku. This is where it inherited its remarkable red bark.

As its name suggests, Corvallis Broom was discovered as a somatic mutation ( witches’ broom) on its parent tree. Such mutations are characterized by a very dense crown and abundant branching.

The growth habit of this variety is upright but the growth rate is very slow. In 10 years, Corvallis Broom will be only 5 feet tall and 3 feet wide. This makes it a dwarf tree suitable for potted cultivation.

The color of the leaves is green but may have a slight yellow tinge if there is too much sunlight. In autumn the leaves turn a bright yellow which contrasts very much with the red bark. 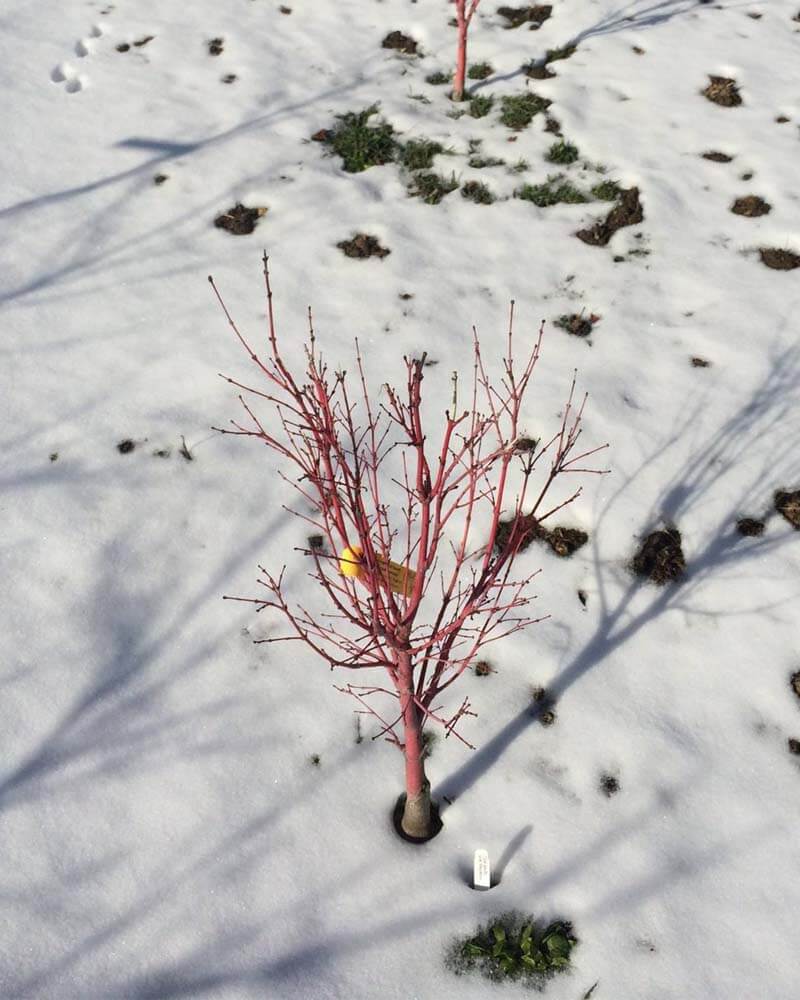 Little Sango is a miniature Japanese maple with red bark. At 10 years of age, it won’t be more than 4 feet tall and 2 feet wide!

It’s a perfect selection that’s equally suited for container and garden cultivation. In addition to its bark it has a very dense crown which in itself is very valuable.

The leaves are divided into several lobes. In spring the color is green but the tips of the lobes have a slight yellowish-red tinge. In summer, the color changes to pure green, and in fall to bright orange.

This variety is recommended for cultivation in zones 6-9. It can tolerate both full sun and partial shade. 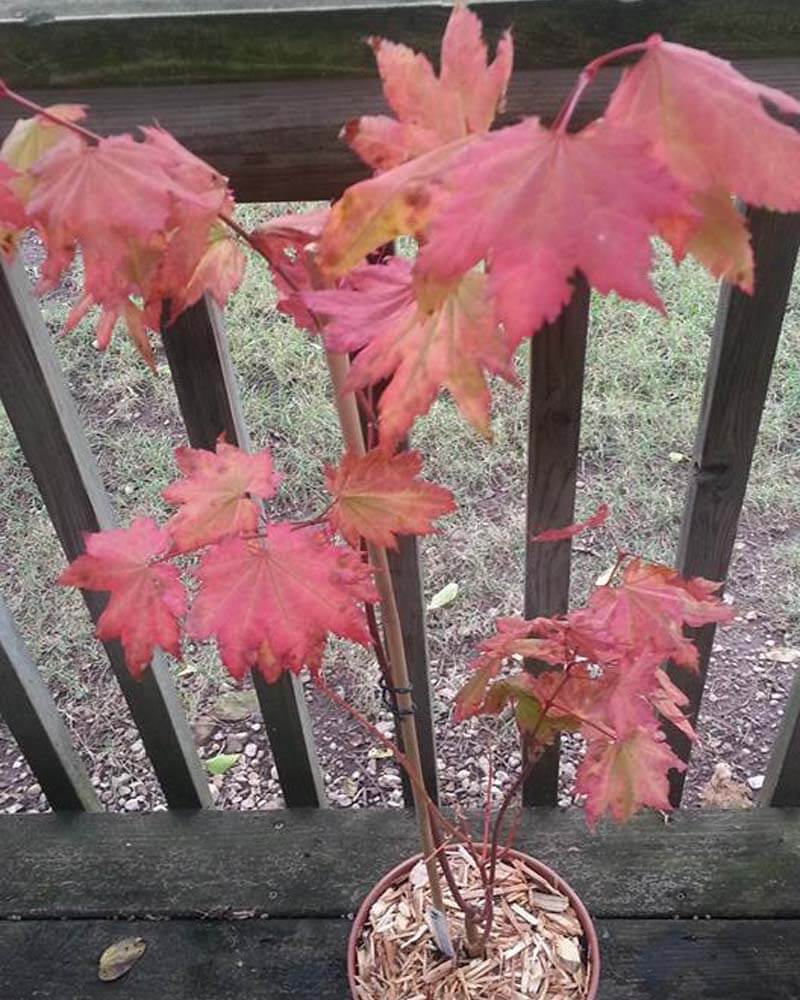 Pacific Fire is slightly different from all the preceding maples because it belongs to a different species. But nevertheless, its bark is red and holds its color better than all other similar varieties. Moreover, in winter, the intensity of the red increases even more.

A special feature of this variety is the wider leaves. The leaf is divided into 7-9 lobes which is a little more than usual. But the cuts are not deep, which increases the leaf surface.

The leaf color is bright green which creates a great contrast with the bark. In autumn the color changes to red-orange.

A small disadvantage is not the best tolerance of both heat and cold. This variety is recommended for cultivation only in zones 6-8. 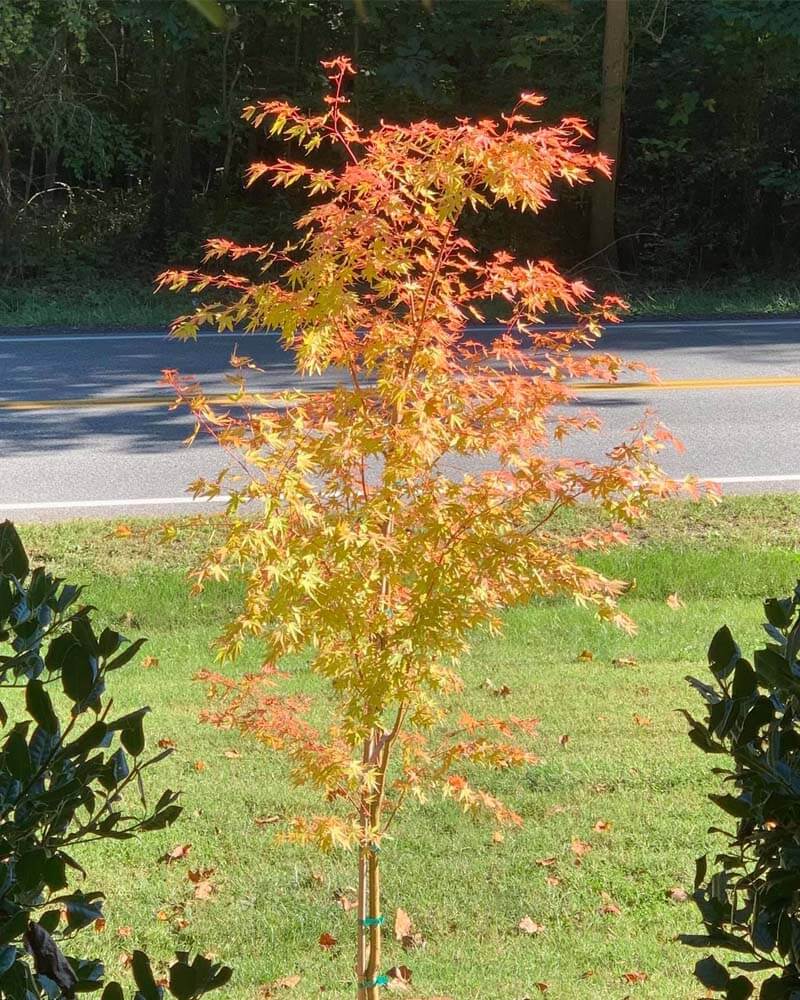 Wildfire is one of those maples that immediately catches your eye. First, because of the bicolor bark. The lower part of the trunk is pale orange with a yellowish tint. While the young branches are bright red.

The second advantage is the foliage. The leaf of this variety has 5 lobes, dissected almost to the entire depth of the leaf plate. The lobes are sharp and narrow with a slight serration.

The basic color of the leaves is green, but they may have a reddish tint in early spring. In fall, the leaves turn bright orange with slight hints of red.

In terms of size, it is a rather small maple. At 10 years old, it will be no more than 7 feet tall and about 4 feet wide. It will be perfect for almost any yard. 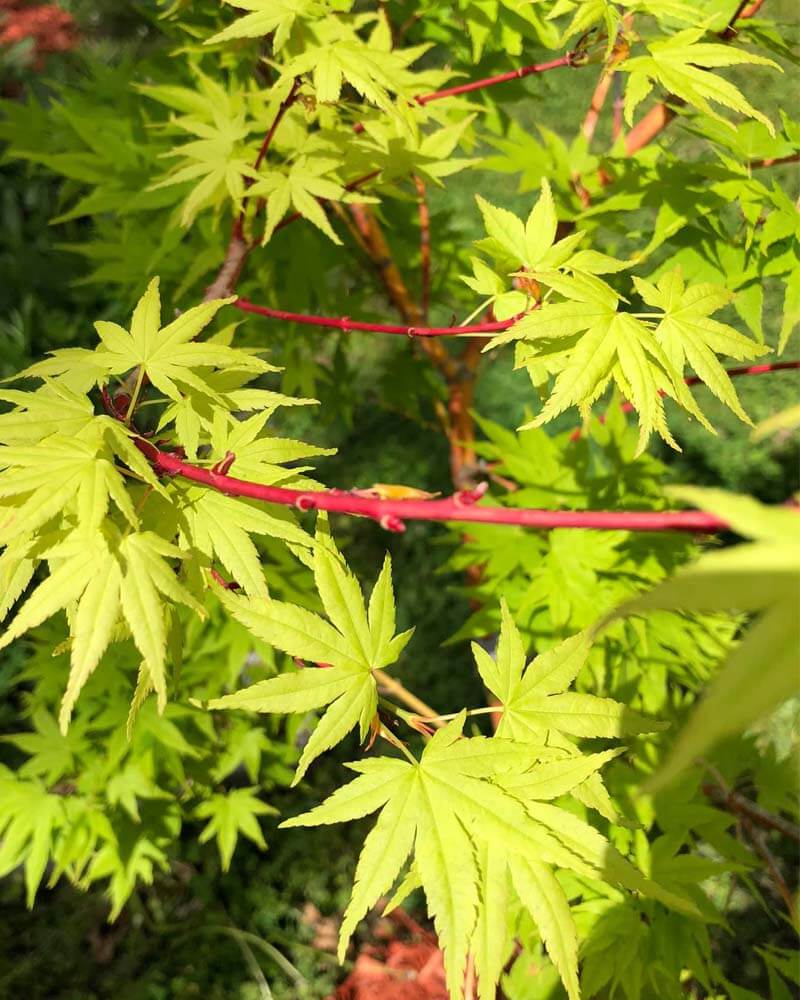 Japanese Sunrise is a unique maple among its peers. The first thing that immediately catches your eye is the bicolor bark. It is yellow on one side and red-orange or red on the other. The young branches have a brighter color than the older ones.

The second unusual feature is the color of the leaves. In spring and summer, the foliage is green or green with a slight yellowish tinge. In autumn the leaves become bright yellow, but there are large red spots on them. This combination looks amazing.

By age 15, this maple can reach 15 or more feet in height and a little less in width. The growth habit is upright. You need to allow plenty of room for this maple.

As for hardiness, it is recommended to grow it from zone 6 north down to zone 9. It tolerates full sun and partial shade well. 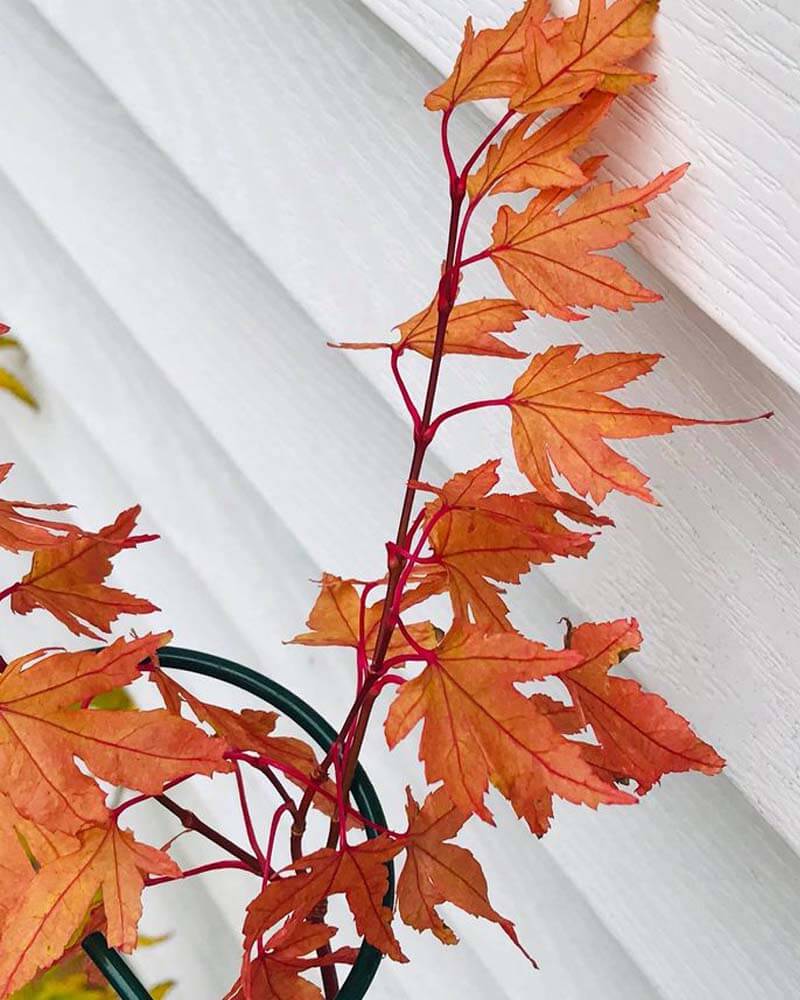 Aka Kawa Hime is another wonderful Japanese maple with red bark. The bark becomes most noticeable in winter.

In spring, the young leaves are bright green in color. The leaf is divided into several lobes. The tips of the lobes are very long and sharp. At the end of the season, the leaves turn orange while the veins turn red, which is an added advantage.

It is a dwarf variety because it reaches a height of about 5 feet at maturity. The crowns are upright and require little or no pruning.

It can be grown in zones 6-9. Afternoon shade in southern states is recommended for this maple. 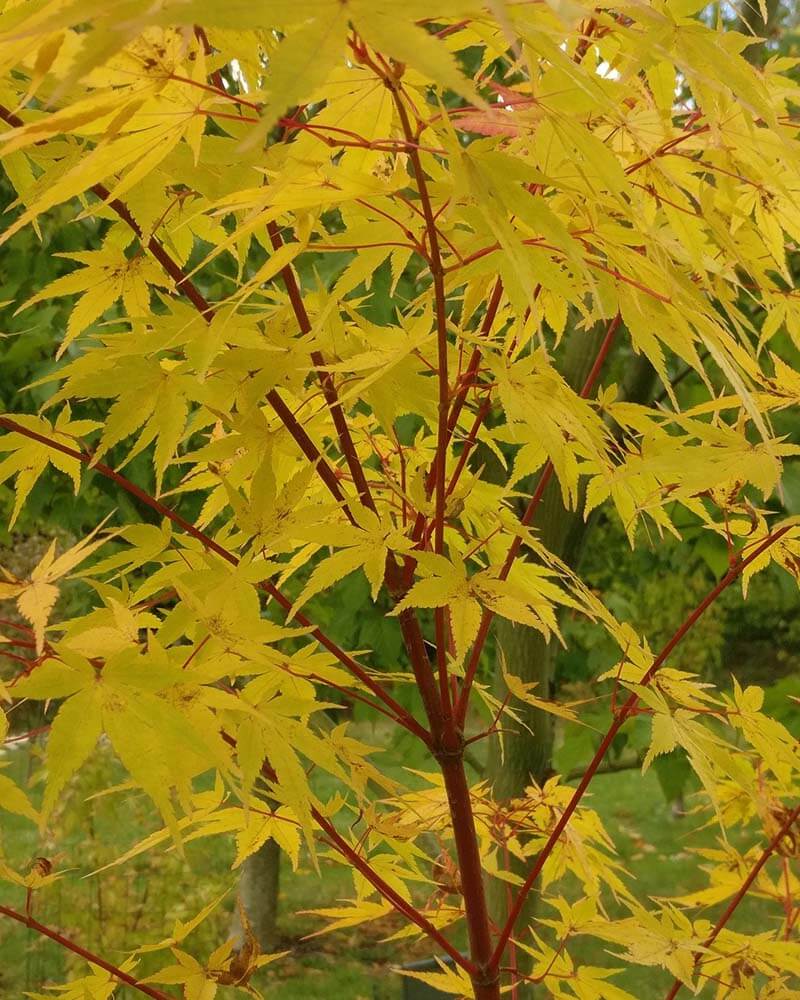 Eddisbury is one of the most common Japanese maples with red bark. It also has wonderful dissected foliage.

The leaves are lime-colored at the beginning of the season with a slight red tinge along the edge. The leaves turn bright green in the summer and yellow-orange in the fall.

It is a rather large variety. At ten years old, it can reach 15 feet in height, so you have to give it plenty of room before planting.

Eddisbury is recommended to be grown in zones 5-8. So almost anyone can have it in their garden.