Comparing two plants is always interesting because you can learn a lot of useful information. In addition, it helps to make the right choice and not to regret in the aftermath.

The second difference is the size. Bloodgood is the larger Japanese Maple and can reach 25 feet in height. Crimson Queen, on the other hand, reaches 10 feet tall at the same time.

Next, we will compare the two trees more closely. I also recommend that you read the article on How to Plant and Grow Japanese Maples Properly.

The first thing that catches your eye when you look at both of these maples is the leaves. The foliage is completely different.

The Crimson Queen has very heavily split foliage. The leaf is divided into several lobes and the lobes are also split apart. You can even say that the leaf plate consists of veins and a narrow margin around them. That is, there is almost no leaf as such.

Bloodgood, on the other hand, usually has a leaf divided into 5 lobes. In rare cases, there are 6-7 lobes. Lobes are large and sharp at the tip. The leaf edge has small serrations.

The leaves also have different sizes. Usually, the Crimson Queen leaf does not exceed 4 inches across, while the Bloodgood leaf can be much larger than 4 inches.

From the leaf shape, one can conclude that Crimson Queen is a more refined variety for collectors or those who like compact and complex shapes.

Bloodgood is a maple that is valued for its larger leaves and crown volume. At the same time, it is less refined and complex when looked at closely.

The color, or to be precise, the shade of color of these maples is different.

At the beginning of the season, the Crimson Queen has lighter red color. It can be described as crimson or crimson-red. It is from the color of the leaves that this variety got its name.

In midsummer, the color becomes a little pale and slightly darker. In the fall, the foliage turns a bright red color before falling off.

Bloodgood has darker leaves and this is especially noticeable if it gets enough sunlight. Its main color is red-purple. Sometimes it can even be almost purple, but by midsummer, the color fades and may even show a greenish hue.

At the end of the season, like its competitor, Bloodgood turns bright red. This is the second time of the year when this maple gets special attention.

A slight advantage of Bloodgood is that the leaves have a larger surface area than the Crimson Queen. As a result, some of the light is reflected off the leaves and gives them a glossy appearance.

Bloodgood is a large tree. It can reach a height of over 25 feet, but a width of just under 20 feet. The growth rate of this maple is quite fast, growing more than 1 foot per year.

The Crimson Queen, on the other hand, does not usually exceed 10 feet in height and 12 feet in width after 10 to 15 years. The growth rate is noticeably slower than the competitor and is less than 1 foot per year.

The size and growth rate of both varieties can vary greatly depending on growing conditions. Bloodgood is nevertheless much larger than Crimson Queen in the same amount of time.

From this data, you should realize that Bloodgood needs more space. Plant it 15 feet away from other trees and buildings.

At the same time, Crimson Queen is better suited for smaller parts of the yard. It needs about 6 feet of space on both sides. That means you can plant it in a small flower bed or fairly close to the house. 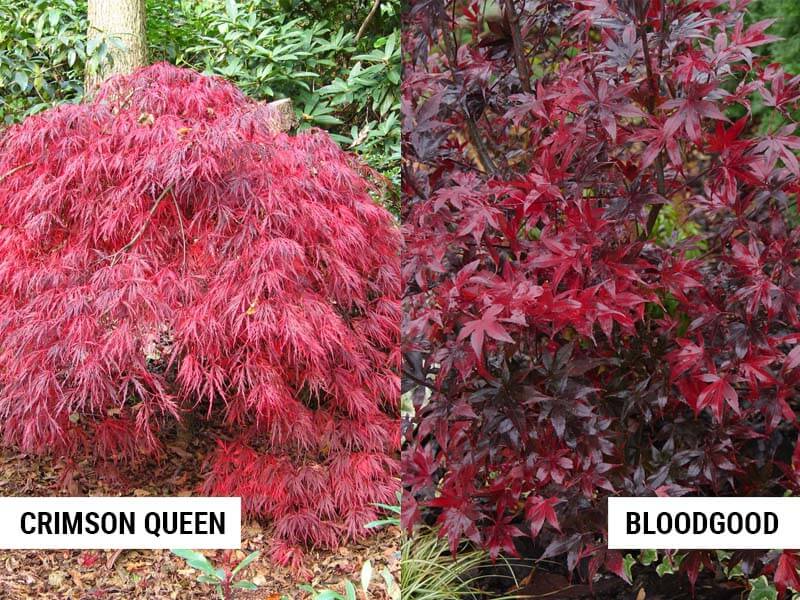 Growth habit is another hallmark of both maples.

Bloodgood has an upright growth habit. In the first 10 years, most branches of this tree grow vertically or almost vertically.

As a result, it grows upward quite rapidly. It is only at a mature age that the crown begins to expand, but still, this maple will always be larger in height than in width.

Crimson Queen on the other hand is a classic weeping Japanese maple. Most of its branches are already sagging and spreading sideways from a young age.

After ten years of growing, you will have a wonderful low mound of filigree leaves that are bright red in color. This variety is primarily valuable as a collector’s item, even though it is not that rare. It is ideal for Japanese-style compositions.

Bloodgood, thanks to its size and shape, can be used as a shade canopy. It is also more prominent in the garden and can even become its center.

The following is a discussion of the similarities between the two varieties. This primarily concerns growing conditions, although there will also be slight differences.

The first is the need for water. Since Bloodgood is a larger maple, it will need more water than Crimson Queen. Check from time to time how wet the soil near the roots is and once it is 1 to 2 inches dry, water with a few gallons of water.

The soil around Bloodgood will dry out faster so it will need to be watered more often. Water the first 1-2 years after planting. Once the tree has taken root, you can stop watering.

To reduce the rate at which the soil dries out, mulch the maple’s root zone with organic mulch. A layer of mulch should be about 2-3 inches. Avoid laying mulch material on the trunk of the tree.

Once a year, apply a slow-release granular mineral fertilizer in the spring. Crimson Queen will need a little less fertilizer than Bloodgood. Read the recommendations on the label before applying.

Both maples need direct sun to develop properly and have vivid leaf color. Plant them in a location with at least a few hours of direct sun a day.

Avoid placing them where water accumulates. If your soil is clayey, improve it with organic matter.