What makes the hosta unique is the beauty of its leaves. Few plants can boast such a huge number of varieties. But sometimes trouble happens to hostas and we are going to talk about one of those today.

Drought stress is the main reason why hosta leaves turn brown. The second common reason is the natural dieback of foliage in the fall. Also, too much sun, disease, and overwatering can cause hosta leaves to turn brown.

In this article, you’ll learn all the possible causes of leaf discoloration and how to fix it. 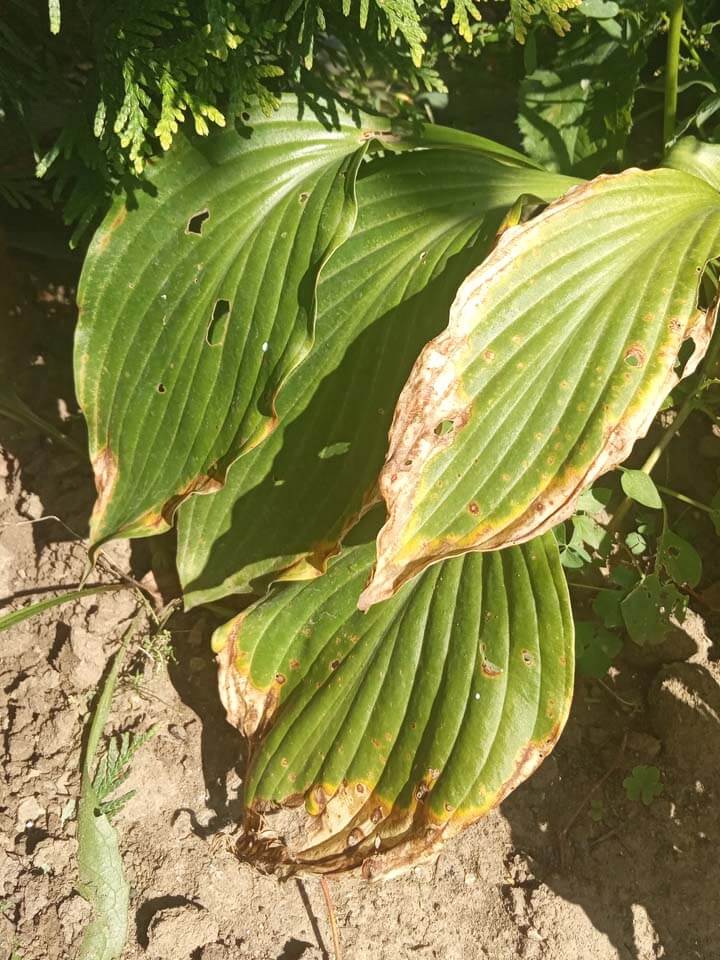 Lack of water always has a negative effect on the hosta. If the weather is hot enough, it will definitely lead to drought stress.

Usually, if a hosta suffers from dehydration, its leaves will droop because the pressure in the stems is low and they cannot support the weight of the leaves.

But if the hosta is growing in partial shade and the sun is too strong, the edge may turn brown at first, starting at the tips. Technically, this is not a sunburn because if the hosta had had enough water it would not have been affected.

Constantly monitor how moist the soil around the hosta is. As soon as the ground dries out more than 2 inches, water the hosta with 1 or more gallons of water.

This is especially important in the first few years after planting. Drought stress usually occurs during the hot summer months. But it almost never happens in spring or fall, much less winter.

Mulch your hostas with pine bark or wood chips about 2 to 3 inches thick. The distance between the stems and the mulch should be about 1 inch. 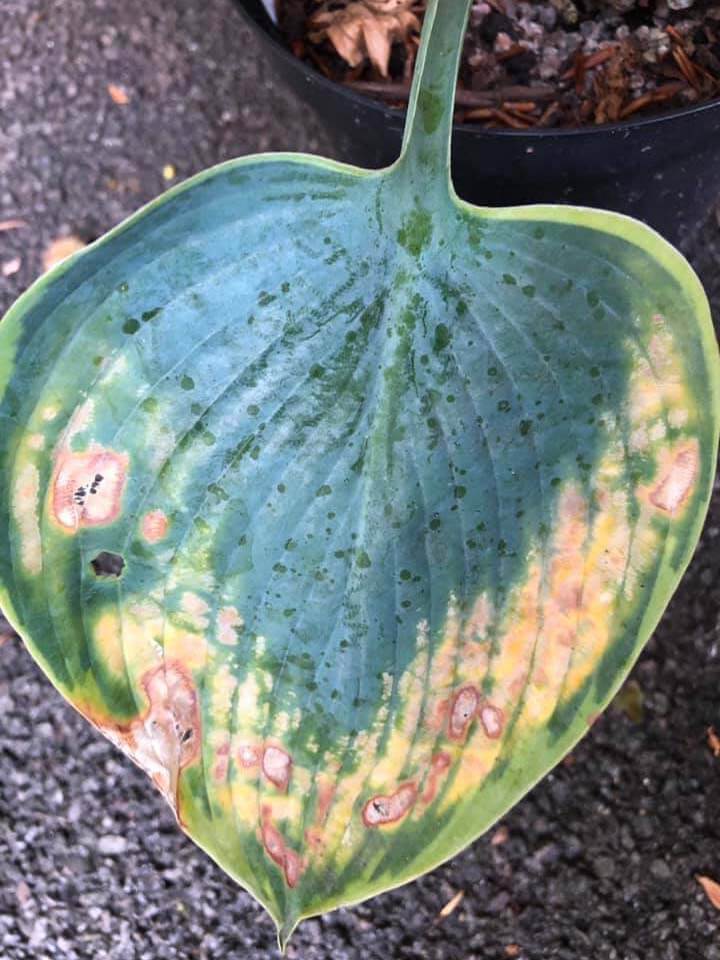 Too much sun is a very common problem with hostas. In general, these plants grow well in full shade, but unfortunately, it is not always possible to provide them with the right conditions.

When there is no full shade, hostas are planted in partial sun. Some varieties tolerate this kind of sun exposure well, while others may suffer with varying degrees of severity.

The more sun-resistant hostas will turn yellowish-green. Less sun-tolerant varieties will get brown or even white areas on their leaves.

Eventually, the leaves in the burn areas will dry out and turn light or dark brown. Sometimes even the entire leaf may die.

The first thing you can do is shade the hosta. Use an umbrella or something else to protect the hosta from direct sun.

Water the hosta one additional time with 1-2 gallons of water. Water only in the evening or in the morning.

Transplant the hosta to a more shady location in the coming fall or spring. Avoid transplanting in winter or summer. 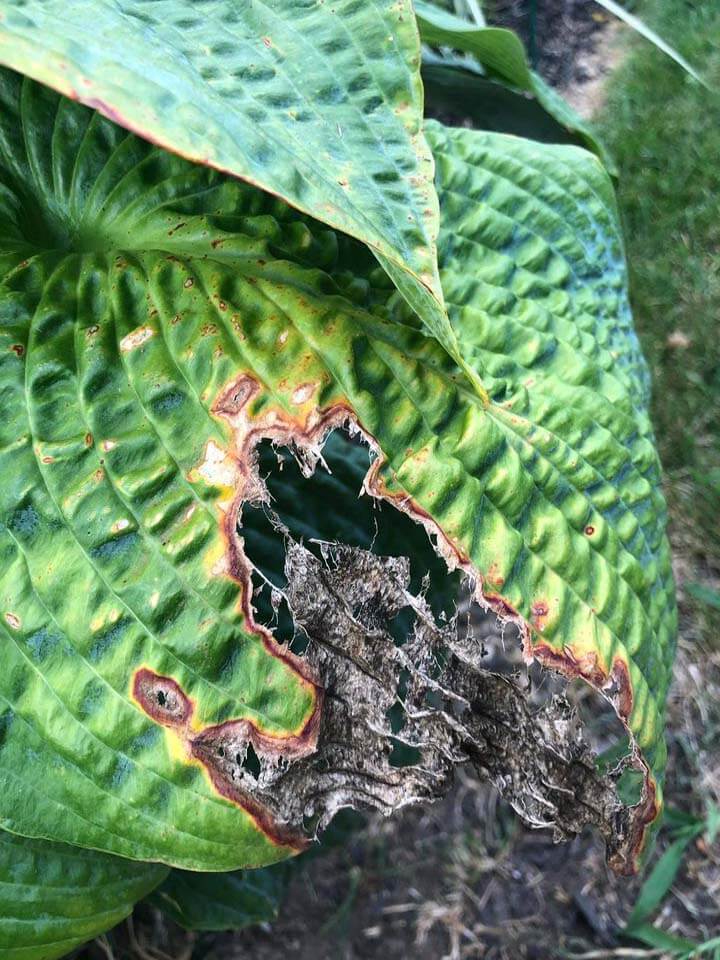 Almost all hosta diseases leave marks on the leaves in one way or another. First of all, this applies to fungal diseases such as anthracnose and a few others.

Fungal diseases usually damage the leaf plate in the form of brown spots or black necroses. Over time, the spots become more and more numerous and the leaf dies and turns completely brown.

The second type of disease is petiole rot. This disease causes the bottom of the petioles to rot and turn brown. In addition, the edges of the leaves also turn brown.

There are also bacterial and some other diseases that can cause discoloration of hosta leaves. If you want to know more about this, I recommend reading the article Hosta Diseases and Treatments.

To avoid fungal diseases, plant your hosta in a well-ventilated and not too humid place. Never over-water a hosta.

If the disease happens, spray the leaves with a multi-purpose fungicide. Repeat the treatment after 10 to 15 days.

To avoid petiole rot, do not cover the petioles with mulch. Also, do not plant the hosta too deep. The place where the petioles and roots join should be at ground level or no deeper than an inch in the ground. 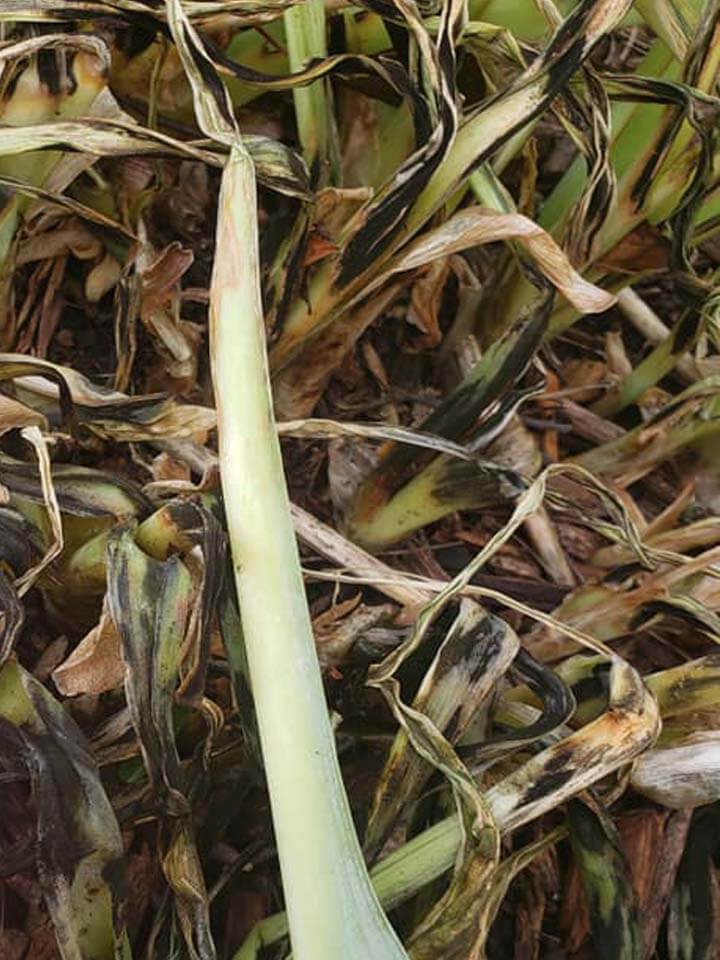 Although the hosta needs a relatively large amount of water, overwatering can still have a negative effect on it.

If the soil around the roots is wet for too long, the roots will soften. Soft roots are much more likely to be affected by root rot.

As a result, the leaves will not get any water and will start to turn brown around the edge or from the tips. In addition, the petioles will fall to the ground and will have black spots on them.

To avoid root rot, do not over-water your hosta. The hosta only needs to be watered after the top 2 inches of soil have dried out.

Do not plant the hosta close to areas where there is a lot of water. For example, near a pond or where rainwater from a roof collects.

If root rot has occurred, dig out the hosta and clean the dirt from it. Use a sterile tool to remove the rotten part. Wash the wounds with an aqueous solution of hydrogen peroxide and powder them with crushed activated charcoal.

Plant the hosta in full shade and well-drained soil. Don’t water for a few days, then water very sparingly.

Some types and varieties of hostas change color before they lose their leaves. First, the leaves turn yellow and if the weather is dry, part of the leaf plate becomes crispy brown.

This usually happens in early fall, but with some hostas, it can happen even in August.

In most cases, the leaf does not turn completely brown. The central part of the leaf remains green until the first frost.

You don’t have to do anything about leaves that turn brown in early fall. Let them stay because they are still good for the hosta. As soon as the frosts come, the whole top part of the plant will fall to the ground and then you just have to cut it off and throw it away. 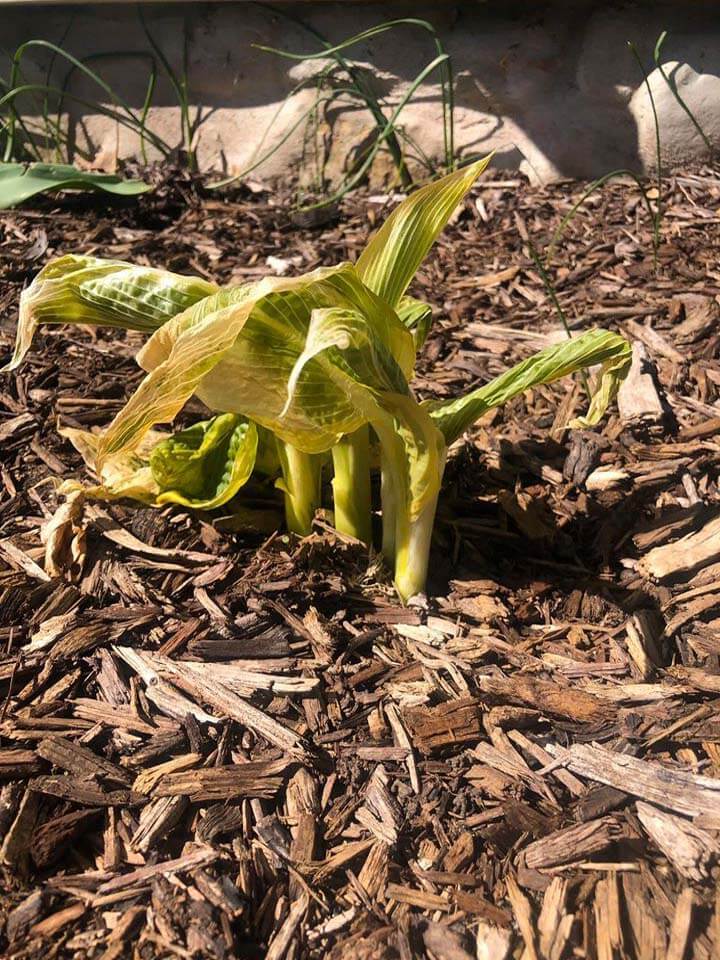 Hostas unfold their leaves in the spring, but this can be a problem. Late frosts can occur throughout the spring and even on the eve of summer.

Young hosta leaves are very sensitive to temperature changes. Even a slight frost can damage young foliage. As a result, the leaf becomes watery and if the sun is shining brightly at the time, it will turn brown.

Not only can hosta leaves be damaged by frost but also by a sudden drop in temperature. Watery spots may appear on them that will darken over time.

If late frosts often occur in your area, watch the spring weather forecast. When frosts approach, cover the hosta with protective material.

Beforehand, place four thin supports around the bush to prevent the material from laying on the leaves. Use a covering material that lets the air through. Avoid covering the hosta with plastic.

Read more: How do you keep Hosta healthy and thriving?

Should I cut off brown hosta leaves?

You need to cut off the brown hosta leaves if there is no green part left on them. In other words, if the leaf is completely dead then remove it.

If the leaf is brown around the edge or at the tip but the middle of the leaf is still green then leave it alone. The green part will provide energy for the rest of the season.