The worst thing that can happen in the garden is the loss of a beloved plant. One of the reasons plants can die is a disease. Hostas, like other plants, can be affected by various fungi, bacteria, or viruses.

Today we will talk about hosta diseases and how to fight them. I have collected the maximum information on this topic, and I want to present it to you in a convenient form. Also, there will be pictures of all the main diseases, and you can compare them with your cases.

First, I will briefly describe each disease in the form of a table with symptoms and methods of treatment. Next, we will talk about each of these cases in detail. 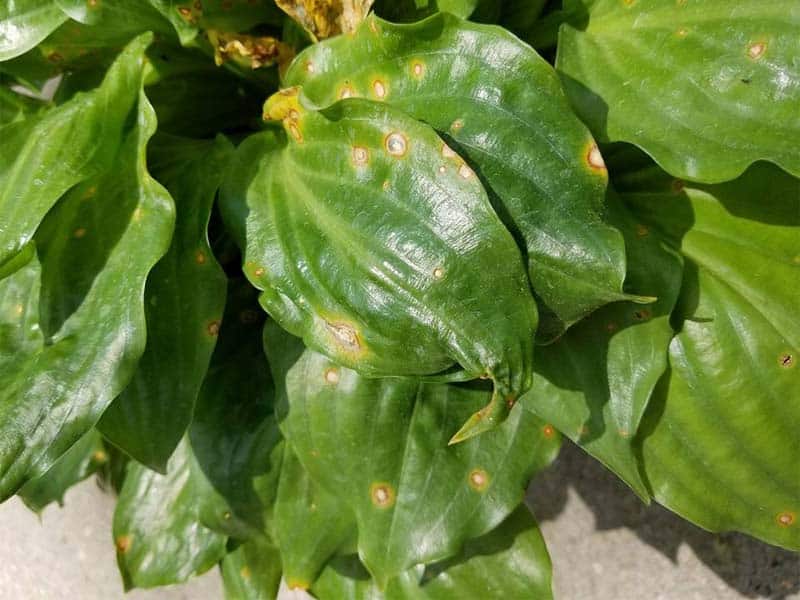 In summer, when the weather is warm and rains frequently, these are ideal conditions for the disease to develop. Anthracnose is caused by spores of various fungi and can cause serious damage to hostas. It is a common disease, although it rarely results in plant death.

If you want to beat this disease, you must first remove the infected leaves and destroy them. Don’t leave cut leaves to rot in the yard!

In the initial stage, if the plant is not severely affected by the disease, use a spray of Phyton. Apply the product to the entire bush and all around it. After a while, the hosta will recover.

In the later stage, you will need to use systemic fungicides, whose instructions state that they can fight the disease. Products containing chlorothalonil are best.

Preventive spraying with systemic fungicides is most effective.

Read more: How Do You Get Rid Of Anthracnose? 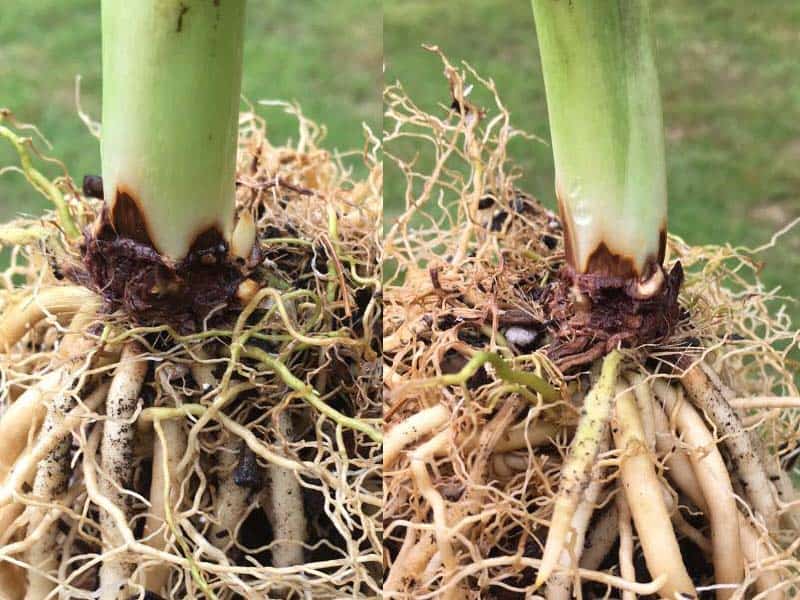 The base of the stem is damaged by Sclerotium rolfsii

Petiole rot is one of the most dangerous enemies of the hosta. It can destroy the plant quite quickly, so prevention and early detection is the key to success.

The spores of this fungus can stay in the ground for a very long time without showing themselves in any way. When favorable conditions come, the disease multiplies quickly and affects the base of petioles. This occurs when the temperature exceeds 80 °F and the humidity is high.

The spores of this fungus love wet conditions, so mulch under hostas is an ideal environment for them. From this, we can conclude that mulch near the rhizome is dangerous. There should be a gap of at least 1 to 2 inches between the petioles and the mulch.

In the early stages of detecting this fungus, thoroughly clean all parts of the plant. Also, remove the top layer of soil around the hosta and replace it with fungus-free soil.

Spray the plant, rhizome, and surrounding soil with a fungicide designed to control this type of fungus (such as Fungo or products containing tebuconazole).

The best control strategy is to regularly spray all plants in the garden with different types of systemic fungicides.

If you notice the disease too late and the plant is severely damaged, there are no other options but to dig up the hosta and move it along with the soil away from your yard. Then thoroughly disinfect all tools and the place where the hosta was growing.

Read more: How Do You Treat Petiole Rot On Hostas? 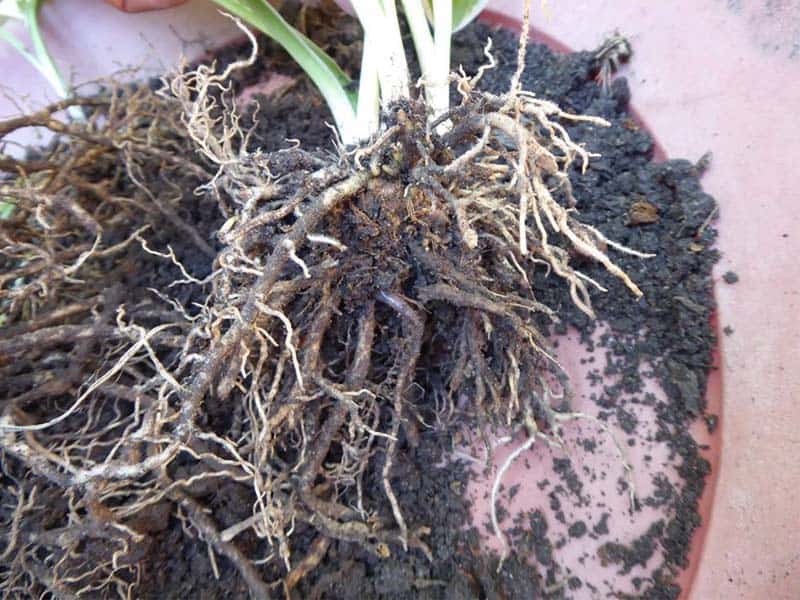 Center of rhizome damaged by FRCR

This is another very dangerous and widespread disease. It is almost impossible to cure the plant. The spores of this fungus are mostly found in the ground. If they get into an open wound, infection is guaranteed.

This disease is extremely dangerous because it can penetrate the crown and affect the entire plant. This distinguishes it from other diseases that affect only part of the plant.

Initially, signs of FRCR are hard to notice. Hosta leaves appear later in the spring, and it has a slower growth rate than a healthy plant. Also, the number of leaves and their size are smaller.

Most often the hosta becomes infected with this disease when propagated by division. If the rhizome was divided with dirty tools or the wounds were not sprayed with fungicide, the plant can become infected.

Check the roots for FRCR before buying. Also, use clean tools for division and treat wounds after division.

If the disease is detected at an early stage, you can cut off the affected part of the plant, and dip it in an aqueous solution of a fungicide containing thiophanate methyl.

Then you need to cover the wound with crushed wood ash. Plant the hosta in a pot using clean peat-based soil. After a while, there is a chance that the plant will recover.

If the entire plant is affected by this disease, it should be dug up and destroyed or removed from the yard. 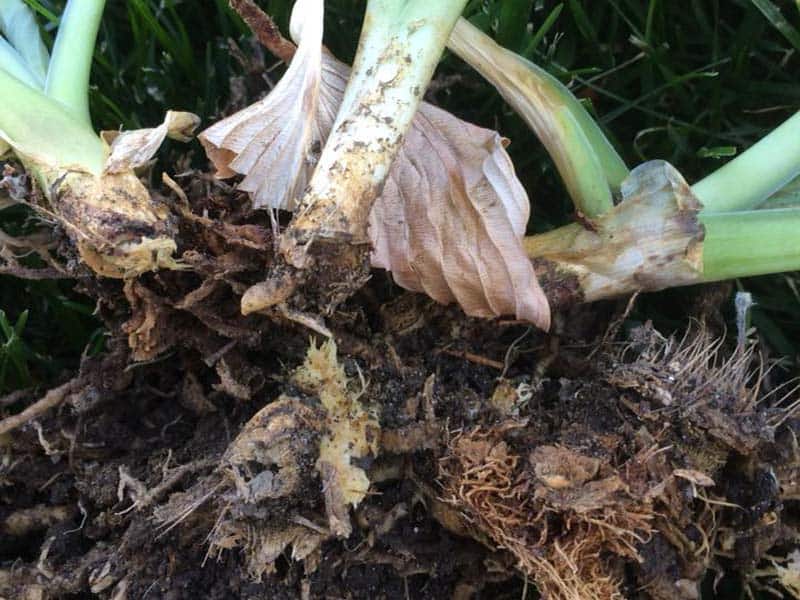 Bacterial soft rot can destroy a hosta completely. As you can see in the picture, the center of the crown is rotted and the plant will not recover.

Like most diseases, the pathogens of bacterial soft rot are in the ground, waiting for the right moment to develop. Infestation occurs most often if hostas are damaged by severe frost during the winter. Through these injuries, the bacteria enter the plant and infect it.

Infestation also often occurs during rhizome division. If you divide hostas and do not follow all sterility requirements, there is a great risk of infection.

If you detect the disease at the initial stage, there is a chance that the plant will survive.

First, dig the hosta out of the ground. Clean it and wash it with water. Use a sterile knife to remove any damaged parts of the plant.

Place the hosta in the shade for a few hours. Then place the plant in an aqueous solution of fungicide (Phyton 35) and let it soak in the solution.

Transplant the hosta into a new location or pot. Use only fresh and clean soil. 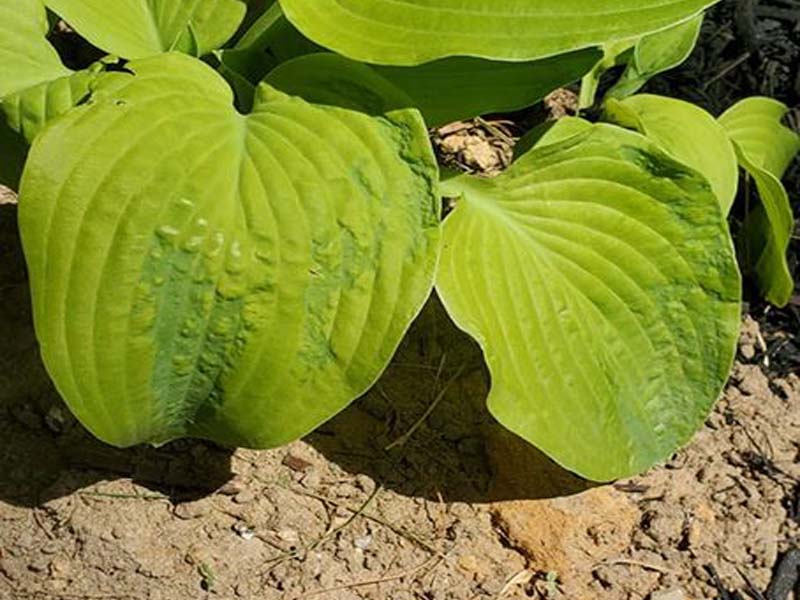 It is impossible to cure a host infected with HVX. This virus was first discovered in 1996 and its origin is unknown.

Another way of infection is sowing the seeds of an infected plant and, as a consequence, transmitting the disease to seedlings.

The virus is also dangerous because in the first year of infection it is unnoticeable. Therefore, it is possible to multiply an infected plant and get newly infected plants.

If the hosta is infected, it is impossible to cure it. Therefore, the first thing to do is to protect yourself from buying sick plants. If you see similar symptoms on a plant you want to buy, don’t do it.

If the virus has severely damaged the plant, there is nothing to do but dig up the hosta, remove it from the yard and burn it. By destroying the infected plant, you will be doing all hosta lovers a favor by stopping the spread of this scourge. 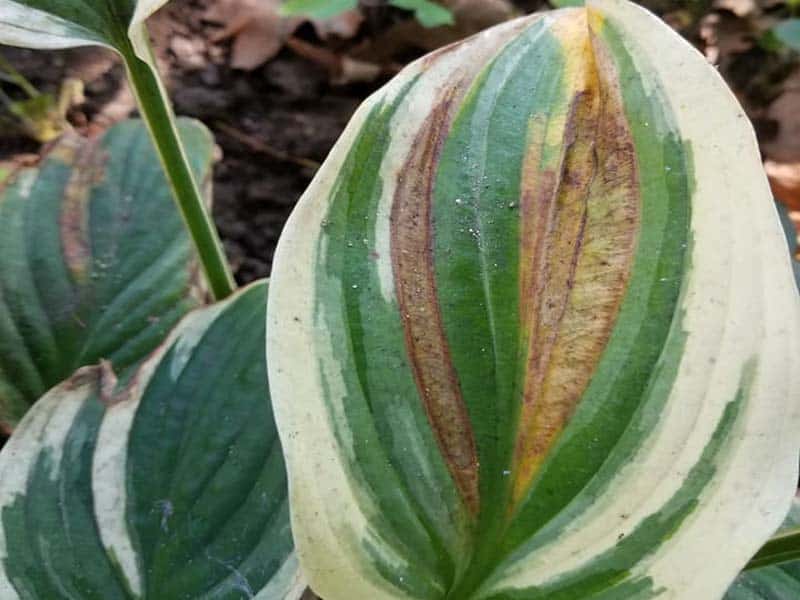 Leaf nematodes are small worms that move around in liquid media. Infestation most often occurs when it rains. If the nematodes are near a hosta shrub, raindrops can drop these worms onto the plant.

They then penetrate through the pores or damaged parts of the plant. Once inside, the nematodes attack the cells and begin to multiply.

At the first sign of infestation, immediately remove the affected leaves along with the stems. Do not leave the leaves in the yard, but burn them immediately. The fact is that these pests can stay alive for a long time in rotting leaves. Also, disinfect all tools after pruning.

Another thing you can do to control leaf nematodes is to cut the stems and leaves of the hosta in late summer when it is still alive, without waiting for them to turn yellow. These leaves should then be destroyed. This method greatly reduces the nematode population.

Read more: How do you treat foliar nematodes?

Root nematodes enter the plant through the tips of the roots and lay eggs there. After hatching, the larva leaves the plant and migrates to the next plant.

Unfortunately, there are no effective methods of controlling nematodes. You must remove diseased plants from your yard along with the soil.

Phytophthora foliar blight is a fairly common fungal disease. It can affect a large number of various plants, including hostas. The disease develops at high humidity and temperatures above 70 ° F. This disease can kill the plant fairly quickly.

Never overwater a hosta. It only needs to be watered when the soil is more than 2 inches dry.

Dig up the diseased hosta and cut off any rotten parts. Wash the wounds with an aqueous solution of copper fungicide and dry for no more than an hour in a dry, dark place.

Remove any badly damaged leaves. Spray the rest with a multi-purpose fungicide.

Plant the hosta in well-drained soil away from areas where it can be very wet. 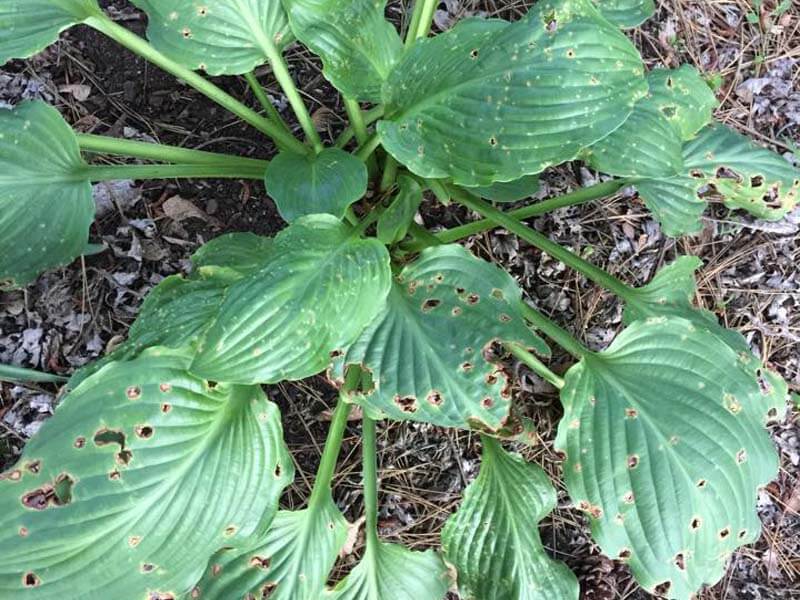 Phyllosticta Leaf Spot is a fungal disease that damages the leaf plate. In addition to hostas, it can affect a wide variety of plants.

It begins when the air temperature reaches 77°F (25°C). At this time, the pathogens begin to attack the leaf. After a while, brownish spots appear on the leaf in the center of which a whitish fungal body can be seen.

The spots then turn into holes with a brown edge. The disease progresses until it destroys the entire leaf.

Avoid overwatering the hosta. Allow the soil to dry 2 inches between waterings.

Do not plant hostas in areas with poor air exchange and high humidity.

If disease occurs, spray the hosta with an aqueous solution of copper fungicide. Repeat the spraying a week later. Remove any badly damaged leaves. 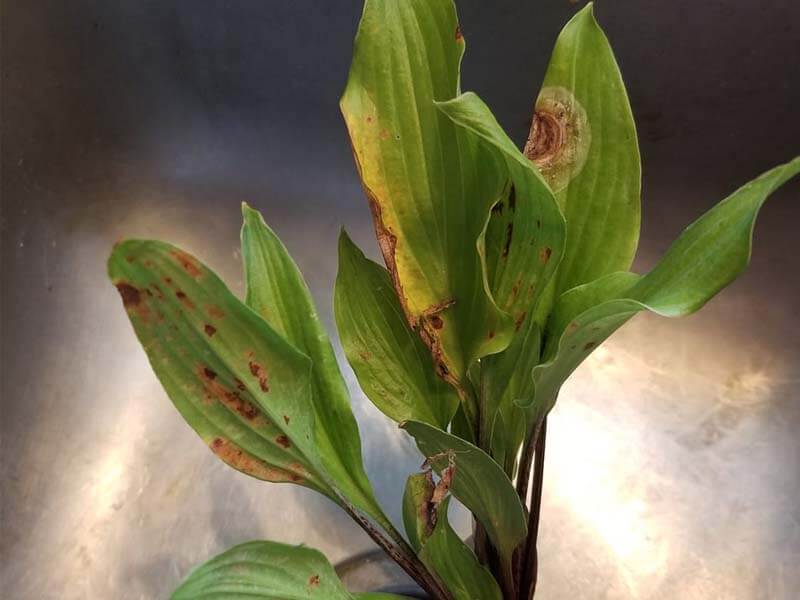 Cercospora Leaf Spot is another fungal disease that, as its name suggests, affects hosta leaves. This disease usually occurs most often in very hot weather.

Like most of this type of disease, Cercospora Leaf Spot destroys the foliage while the stems and crown remain untouched.

Spray the hosta regularly with an aqueous solution of fungicide until the disease recedes. Allow at least 7 to 10 days between applications.

Be sure to remove any dead leaves.

There are also some other diseases that can affect the hosta. Let’s take a quick walk through them.

Necrotic Impatiens Necrotic Speck Virus is another infection that can affect your plants. It is spread by various species of thrips.

Symptoms do not appear immediately. The most typical sign is white patterns on the green leaf. Necrosis of the leaf is also possible.

Control methods include disinfecting tools and spraying plants with insecticides.

Tomato ring spot virus causes the yellowing of leaves similar to chlorosis. It is spread when the hosta propagates by division. This virus is also transmitted by nematodes.

There are no effective methods of controlling it. The only thing you can do is remove infected plants to avoid spreading the virus.