The great advantage of hostas is the huge number of varieties of different colors. The various color combinations of hostas can satisfy the tastes of even the most refined individuals.

The main reason why hostas change color is the weather. Throughout the growing season, some hostas will turn greener while others will be lighter in color. This is completely normal as it is the result of heat or other weather changes.

There are also a couple of additional reasons why the color of the hosta changes. We will look at them all in detail in this article. 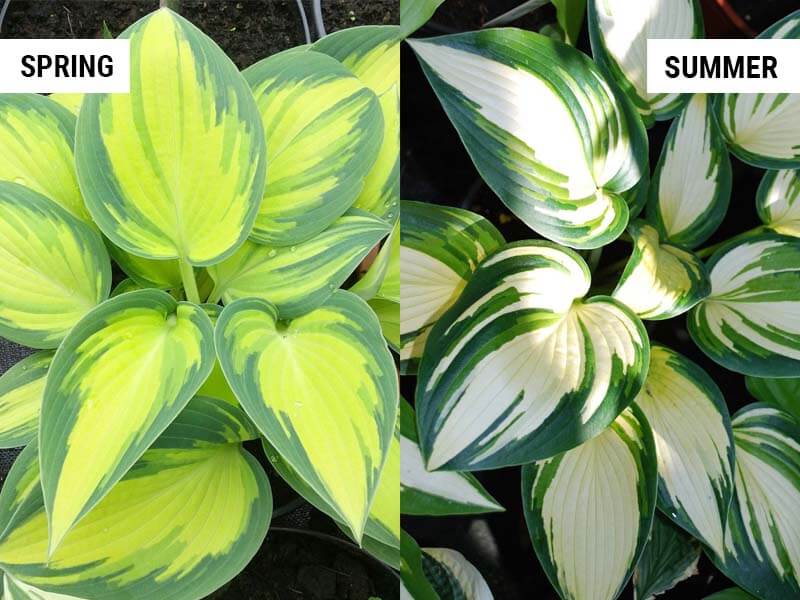 Remember Me Hosta changes from yellow-green to white-green throughout the season.

Hostas, like all living organisms on earth, are constantly changing and adapting to their environment. The weather and climate directly affect not only the growth of hostas but also their color. Let’s look at the different cases of color change.

Very often a hosta that starts out yellow can turn white in the middle of summer. The Remember Me Hosta, for example, has a combination of bluish-green and yellow in the spring. But around July it can turn white-green. Hot weather often contributes to this.

Hosta ‘Gold Standard’, on the other hand, is usually light green with no hint of yellow at the beginning of the season. It turns really golden in the second half of the season.

Another change that often occurs is the greening of the hosta. Take White Feather Hosta, for example, which is really white until early summer. Then it turns green as if it were covered by a green mist. It is a very unusual combination of white and green.

From all of this, it follows that a change in the color of a hosta is absolutely normal. It depends on a lot of factors, including the weather. That is, every year the hostas can change differently. You don’t have to do anything about it, Mother Nature has arranged things so that everything is variable. 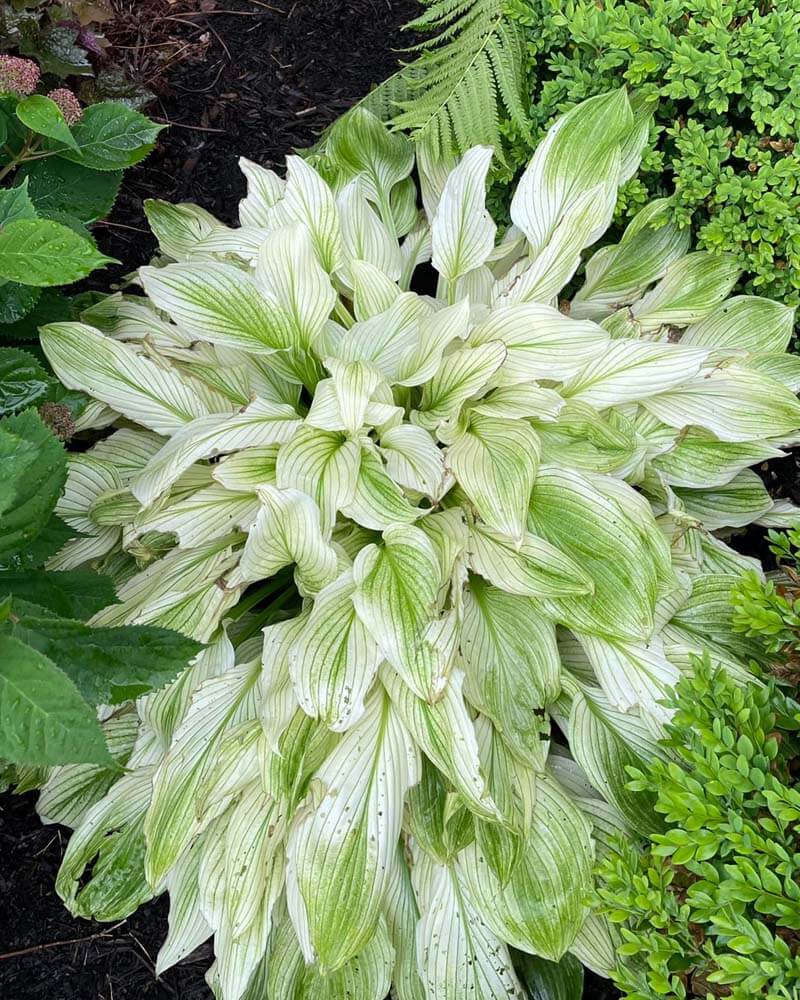 The second factor that affects the color of the hosta is sunlight. Blue hostas are most sensitive to the sun. The main reason why blue hostas turn green is direct sunlight.

In general, blue hostas prefer to grow in full shade. They can also tolerate a small amount of direct sun. But if they get more than two hours of sun a day, they will turn green. 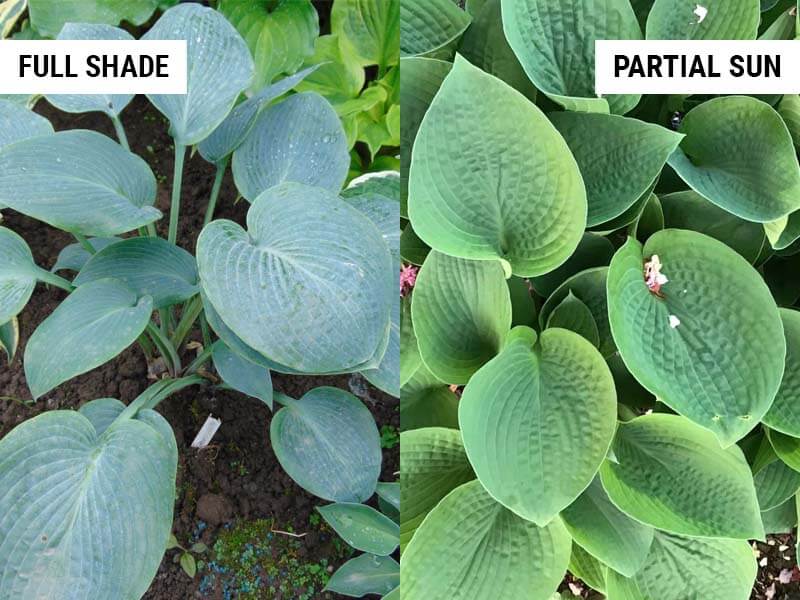 The Blue Cadet hosta will be blue in full shade and green in partial sun.

Blue hostas only appear that way, but they are actually green. The light gray waxy coating on the leaves makes them blue. This coating is intended to reflect excess light. But if a blue hosta grows in a sunny spot, the coating will evaporate and the hosta will turn green.

Also, the yellow varieties can become pale if they get a lot of sun. This is especially true for the afternoon sun.

To avoid color loss, plant blue hostas in full shade. Other hostas should get no more than 4 to 6 hours of direct sun. For more on this issue, see the article Hosta Light Requirements. 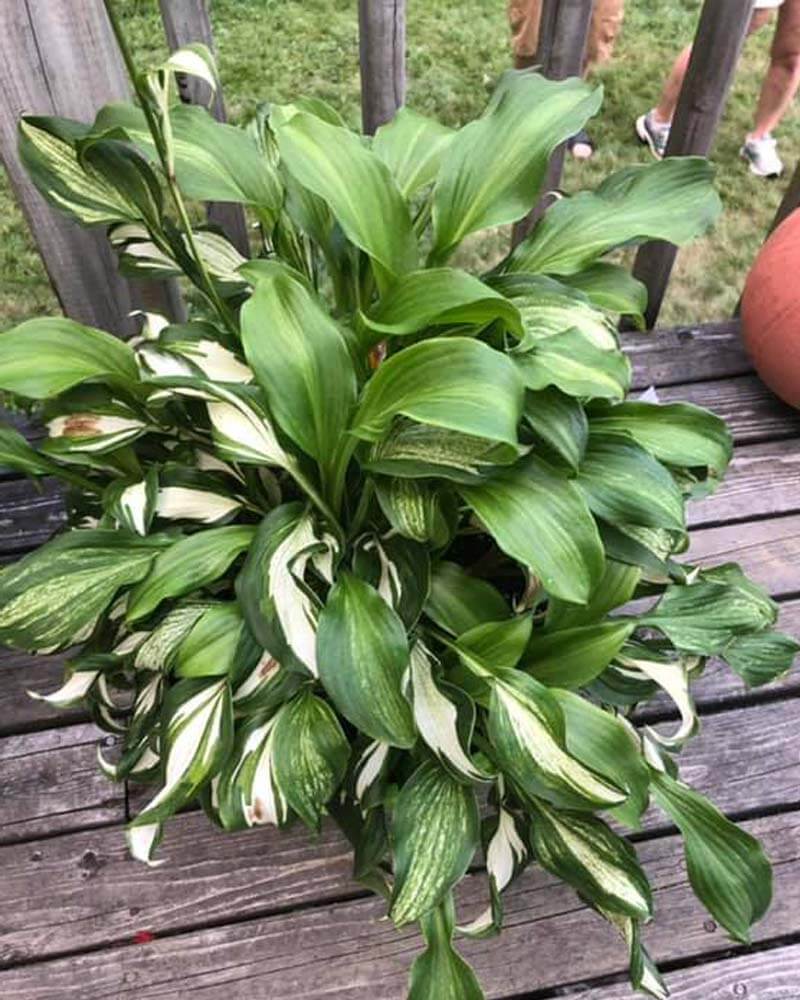 The next thing worth mentioning here is mutation. All living organisms are subject to mutation, so the universe is looking for new life forms that are better adapted to their environment. But not all new forms are better than their parents.

Take the variegated hosta, for example, which is a mutation of the common green hosta. The chlorophyll-free white or yellow tissue looks very nice on a green background. But the less green tissue in the leaf, the weaker the hosta.

Sometimes it happens that a variegated hosta will have a bunch of completely green leaves. This mutation is called reversion, which means that the hosta returns to its original form.

You can see this kind of reversion in the picture above. Over time, more and more green leaves will appear until the variegation is gone.

If this happens to your hosta, you will need to cut the green leaves off constantly to keep the variegation. You can also divide a hosta by removing the green leaves along with part of the rhizome. 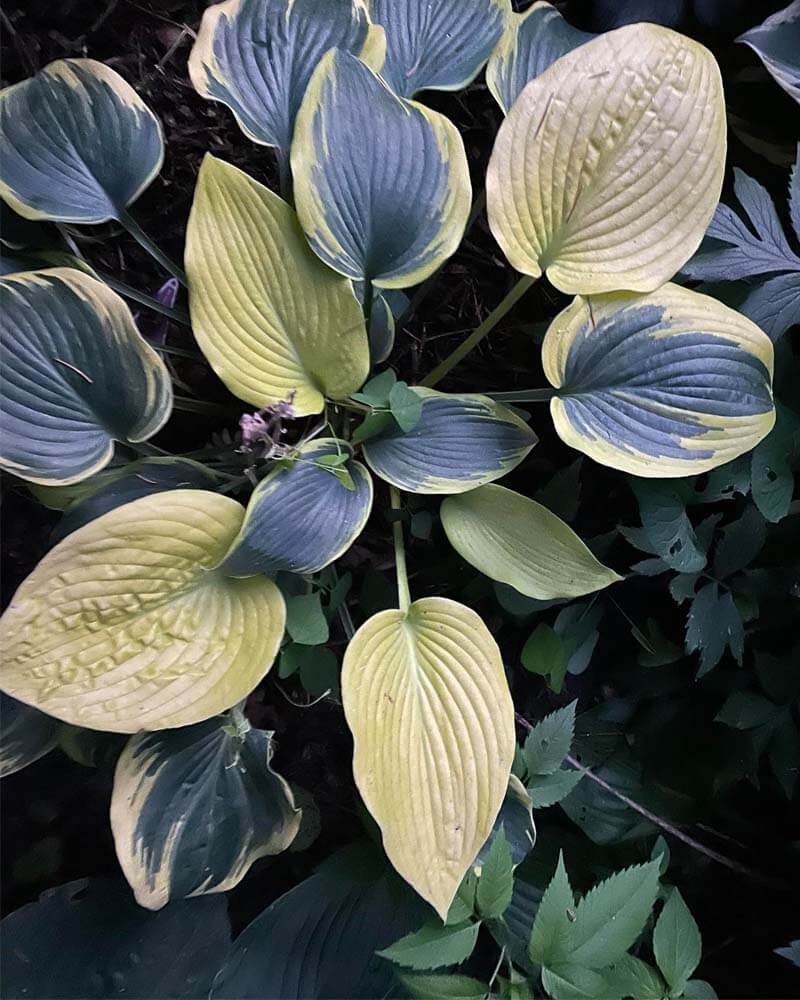 Yellow sport on a variegated hosta.

The opposite case is also possible. Part of the variegated hosta can become more variegated or even completely yellow (white). This phenomenon is called sport. This is how the world-famous White Feather Hosta was born.

If this happens to your hosta, you are very lucky because you have a unique new variety. You need to divide this part from the rest of the hosta. Then plant it and let it grow for a while. After some time, show it to the community of hosta lovers for discussion. 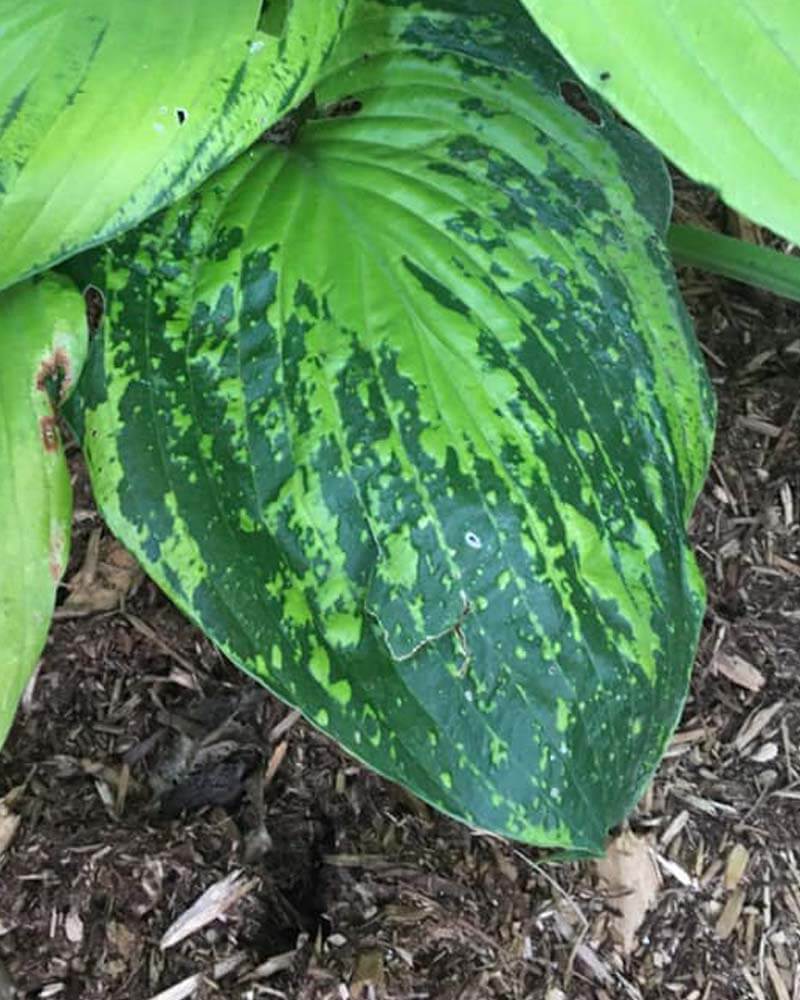 One of the most unpleasant causes of change in the color of hosta leaves is Hosta Virus X. This is a serious disease that in most cases spreads by dividing the hosta. It usually occurs in nurseries that do not properly care for their hostas.

The disease is not curable and the end result is the loss of the hosta. It can take several years from the time of infection to death. During this time, the hosta will change color.

Yellow or light green areas may appear on the leaves. It will look as if the hosta has suddenly become variegated. But this virus is slowly destroying the hosta by reducing the amount of green chlorophyll.

As I said, there’s nothing you can do about it. The only thing to do is to get rid of the diseased hosta.

Hosta changes color in the fall 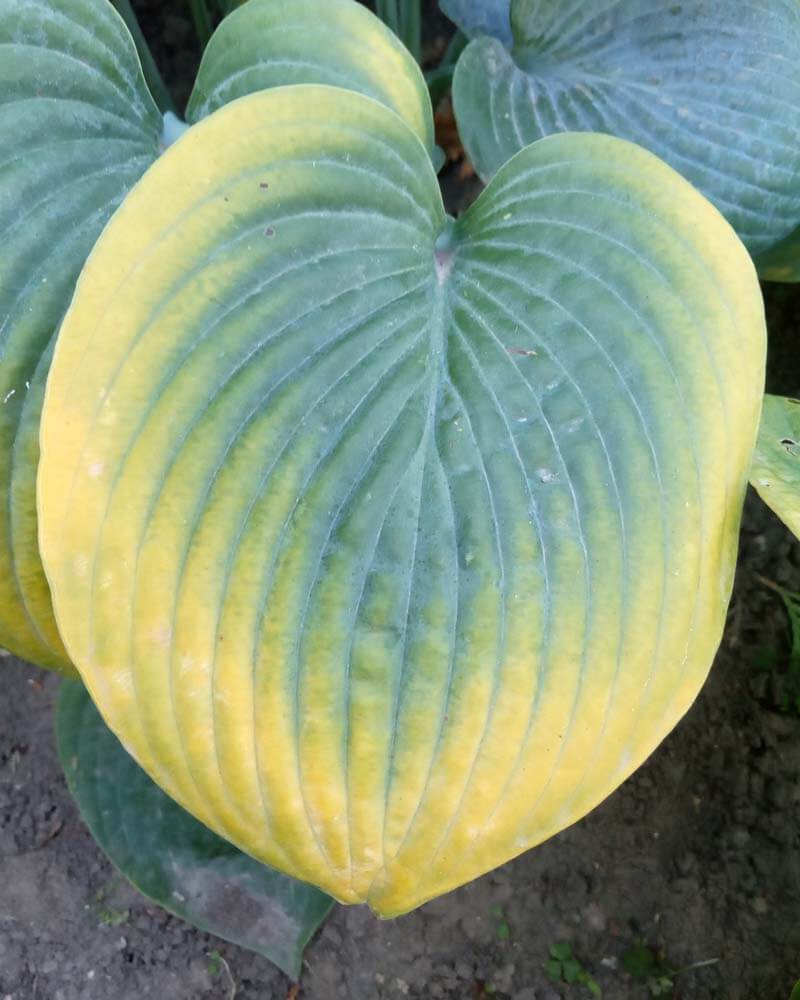 The hosta turns yellow at the end of the season.

If your hosta changes color in the fall or late summer, it’s perfectly normal. This means that it is time for it to shed its leaves and go into a dormant state.

There are several options for color change. The most common is for the hosta to first turn yellow and then droop. But the leaves may turn pale beforehand, i.e. they may become discolored. Also, some hostas turn brown right away if the end of the growing season arrives.

All you have to do is cut off the yellow leaves and throw them in the trash. Cut them off about 1 to 2 inches off the ground. You can read more about this in the article Do you have to cut down hostas in the fall?