Plants are living beings that have learned to extract everything they need from their environment. But if you want to achieve great results you can help your plant a little.

Fertilize Dwarf Alberta Spruce using a fertilizer with a balanced NPK formula and in slow-release pellet form. Apply the fertilizer in early spring and it will be enough for the entire season. Also, place a layer of compost around the spruce to provide it with organic nutrients. 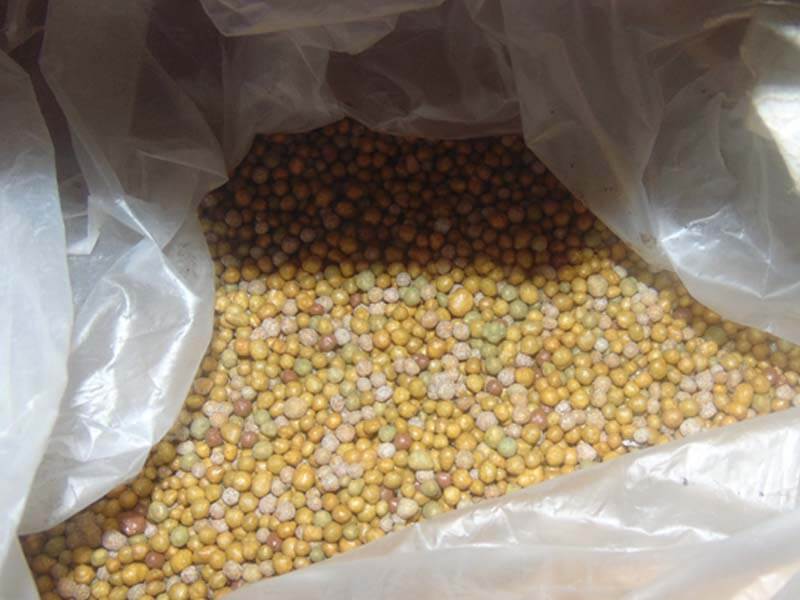 The best fertilizer for Dwarf Alberta Spruce is a mineral fertilizer with equal amounts of the three basic elements:

Usually, manufacturers label their products with numbers such as 10-10-10. This example means that the product contains 10 parts of each element. Such a fertilizer is a good addition to the proper care of Dwarf Alberta Spruce.

This is not a strict requirement, though. You can also use a fertilizer with a bit more nitrogen. With enough nitrogen, the needles will be very lush and bright green.

I for example use a fertilizer with the formula 15-9-12. That means it has more nitrogen, less potassium, and even less phosphorous. It is a universal fertilizer, with which I feed not only spruces but all my plants. So far, everyone is happy with it.

Also, make sure the fertilizer contains at least some magnesium. This is important because without magnesium photosynthesis is impossible. Having some iron in the product is also an advantage to avoid yellowing of the needles.

The best form of fertilizer is slow-release granules. There are products with different release periods, the most convenient ones are those with longer release periods.

Since Dwarf Alberta Spruce is a small plant, 2 ounces (50 gr) of pellets at a time is enough. Younger spruce can be fertilized with less fertilizer (1 ounce).

Make a small hole near the roots of the tree and pour the fertilizer there, then cover it with soil. This way you avoid the pellets being washed away by the rain.

The best time to fertilize Dwarf Alberta Spruce is early spring. Depending on the zone, this may be March or April. This is when the spruce is awakening from hibernation but has not yet begun to grow. Getting fertilizer at this time will build up enough strength for good growth in late spring.

Fertilizers with a long release period (6-8 months) are most suitable because you can apply them once and the plant will be nourished for the whole season. You don’t need to fertilize a second time in a year.

On the other hand, you can apply the fertilizer in two phases. The first one is in early spring, but you have to use a fertilizer with a release period of no more than 2-3 months. Also, the amount of fertilizer should not exceed 1 ounce.

The second time is in late June or early July. Also, use a fertilizer with a 2-3 month release period and no more than an ounce per plant.

The advantage of two-step fertilization is that the plant will receive more fertilizer and may even have two growths in a season.

The disadvantage is that second use of fertilizer with a release period of more than 2-3 months may cause the spruce to start growing in the fall. As a result, the young growth will not have time to mature by winter and will die.

For the same reason, do not fertilize spruce in late summer, fall, or winter.

Another type of fertilizer that you should use is organic matter. It should be used together with mineral fertilizers and you will get great results.

The best organic matter for fertilization is compost. The main thing is that it should be of high quality, free of diseases and pests.

Mulch the surface around the spruce with a layer of compost no thicker than 2 inches. This should be done in the spring. Throughout the season, organic matter will make its way to the roots and nourish the plant.

It is important not to put mulch on the trunk of the spruce. There should be a few inches of space between where the trunk comes out of the roots and the mulch.

Once a year, the old compost should be replaced with fresh compost.

In addition to organic nutrition, a mulch of compost will prevent rapid drying and overheating of the soil surface.

Dwarf Alberta Spruce very rarely suffers from a lack of nutrients. If you have normal soil in your yard, the plant will be fine. It will extract minerals from the soil and there will be enough for more or less normal development.

Of course, without additional nutrients, it will not be as pretty and the growth rate will be a bit slower. But overall, it will be fine.

But if the soil is very poor (sandy or rocky) then the spruce can cause problems. First, it will grow very slowly and the needles will not be as dense. Secondly, the color will be pale green or even yellowish.

In the worst case, it can even develop chlorosis and other diseases. So if you have poor soil or if you grow spruce in a container, you definitely need to fertilize it following the above recommendations.

Over-fertilization is quite common. Beginners try to increase the size of a plant or speed up its growth by using fertilizer very often or using large amounts of fertilizer.

Unfortunately, in most cases, this has negative consequences. The first thing that can happen if there is too much fertilizer is that the roots get burned. This will cause the needles to turn yellow and fall off.

The second case is that the spruce can grow very vigorously and become exhausted. In addition, the branches will not mature properly. As a result, fungal diseases and frost can easily damage them.

If you are faced with over-fertilization, you should water Dwarf Alberta Spruce with plenty of water to flush the fertilizer out of the soil. Further, do not fertilize the spruce more than twice a season.