Winter is a real challenge for plants because conditions during this time are very harsh. Today we will look at what to do to make the plant survive the winter better.

To protect the Dwarf Alberta Spruce in winter, wrap it in a burlap that keeps out the sun. Also, water the tree well in the fall and mulch the area around it.

In general Dwarf Alberta Spruce is a very hardy plant. It can survive the winter from zone 2 through 7. It will not get frost damage as it comes from White Spruce which is common in Canada.

The only problem that occurs with this small pruce is the burning of the needles in winter and early spring. This happens because of the underdeveloped root system. As a result, the spruce is not able to provide itself with enough water. 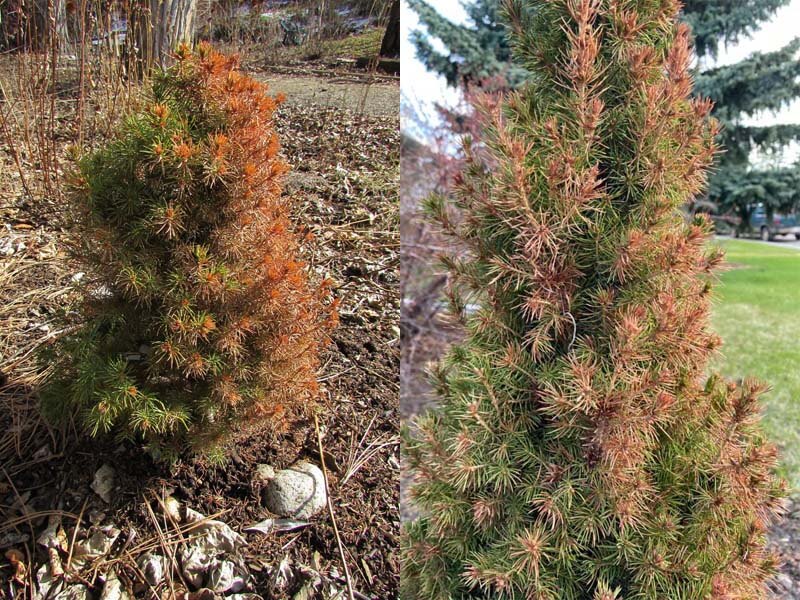 First, let’s talk about the planting location. Dwarf Alberta Spruce tolerates full sun so it can be planted almost anywhere. But if in your region there are severe frosts and the needles constantly suffer, it is better not to plant it in full sun.

Choose a place, for example, on the east or west side of the house. The light should illuminate the tree only half the day. It will also be good if the place will be protected from strong winds.

Avoid planting the Dwarf Alberta Spruce close to a wall or other vertical surface that can reflect light or get hot. The distance between the spruce and other objects should be at least 5 feet.

Now let’s talk about planting times. The best time to plant spruce is in the spring, but sometimes it is recommended to plant it in the fall as well. In this particular case, you need to avoid planting in the fall because the tree will definitely not have time to take root and could burn.

If you plant the tree in the spring, it will have a stronger root system by winter. Also by adhering to the following recommendations the possibility of winter damage is minimized.

The next thing to do to prevent Dwarf Alberta Spruce from burning is to install sunscreen. This can be done by placing two stakes in front of the tree on the south side and attaching plywood or something similar to them.

This way you will protect the spruce from the mid-day sun. In most cases, this will help. In the spring, the shade should be removed so that the tree gets enough light.

But in addition to the winter sun, the spruce can also get damage from frosty winds. In this case, it is better to wrap the crown with a burlap or other protective material. This way you will protect the spruce more reliably.

Choose a material that lets in as little light as possible but is not completely airtight. In other words, the material should be thick to protect the needles from wind and sun, but at the same time, the tree should breathe through it.

Wrap the crown completely, attaching the ends at the bottom of the trunk. As soon as spring arrives and the ground thaws, the material should be removed.

The next thing you want to do is mulch Dwarf Alberta Spruce. Sometimes even the mulch itself is enough to keep you out of trouble in winter.

The first thing a mulch can do is trap heat that comes from the ground near the roots. As a result, during a thaw, the roots will be able to deliver some water to the needles.

In addition, mulch will hold moisture in the ground longer if the winter is dry. Avoid mulching with inorganic materials such as shredded tires.

The best material for mulching is organic matter. It can be compost, peat, or pine bark. Use only high-quality products.

The thickness of the mulch layer should be 2-3 inches but no more. Also keep the mulch away from the trunk of the tree, as a buried trunk can begin to rot. There should be a gap of at least 2 inches between the mulch and the trunk.

Mulch the area around the spruce twice the diameter of its crown. The mulch does not need to be removed in the spring but replaced once a year with fresh mulch.

Well-watered soil can not only provide the roots with moisture but also conduct heat better. If you give enough water in the fall, it will be much easier for the spruce to survive the winter.

Water saturation does not mean creating a pond or swamp around the roots. Beginning in mid-autumn, constantly check the moisture content of the soil, and as soon as it is half an inch dry, water the spruce.

The best way to water is with a drip hose. Put it around the tree and turn it on for a few minutes with minimal pressure. The droplets coming out of the hose will immediately soak into the ground.

If you water with a sprinkler, most of the water will go to the side and you will have to water again as a result.

Once the ground freezes, you have to stop watering. But if the winter is warm and dry, water the spruce from time to time.

What you don’t want to do is fertilize Dwarf Alberta Spruce for the winter. This is especially true of nitrogen fertilizers because they can cause young shoots to grow and suffer in the winter.

There are fall fertilizers for conifers that usually do not contain nitrogen. Using them can even improve the situation of the spruce during the winter. If you do use it then make sure to follow the manufacturer’s instructions.

On the other hand, if you fertilize your spruce in spring with slow-release fertilizer, you don’t have to worry about anything else. Your spruce will be ready for winter without additional fertilizer.

In addition, the organic mulch will also nourish the plant throughout the year.