Yellow leaves are quite an interesting phenomenon in the plant realm. Today we will look at the yellow hosta varieties that are highly prized among hosta lovers.

First, come the varieties with the most yellow leaves. This is a rather refined category of hosta that requires a special approach to cultivation. 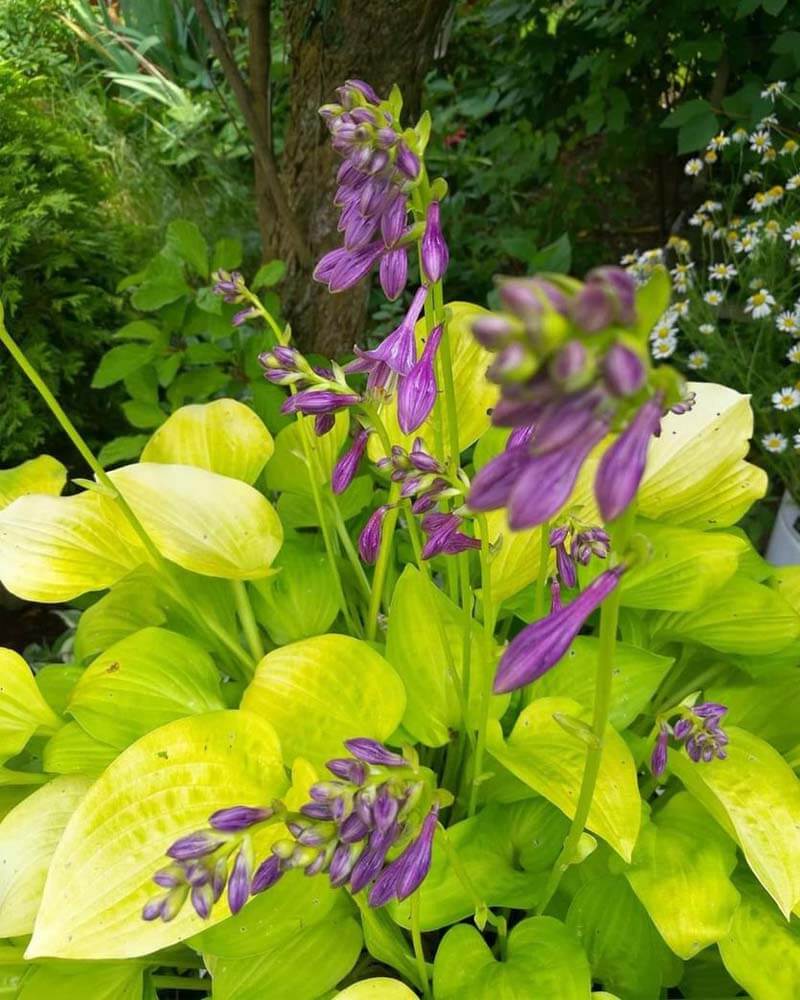 First on the list of yellow hostas is Golden Scepter. It is quite a compact variety that grows up to 8 inches tall and up to 20 inches wide.

It has wonderful yellow round leaves. The slight ribbing and small size of the leaves make this hosta very pretty. To get a brighter yellow color, give it up to 4 hours of the direct morning sun. 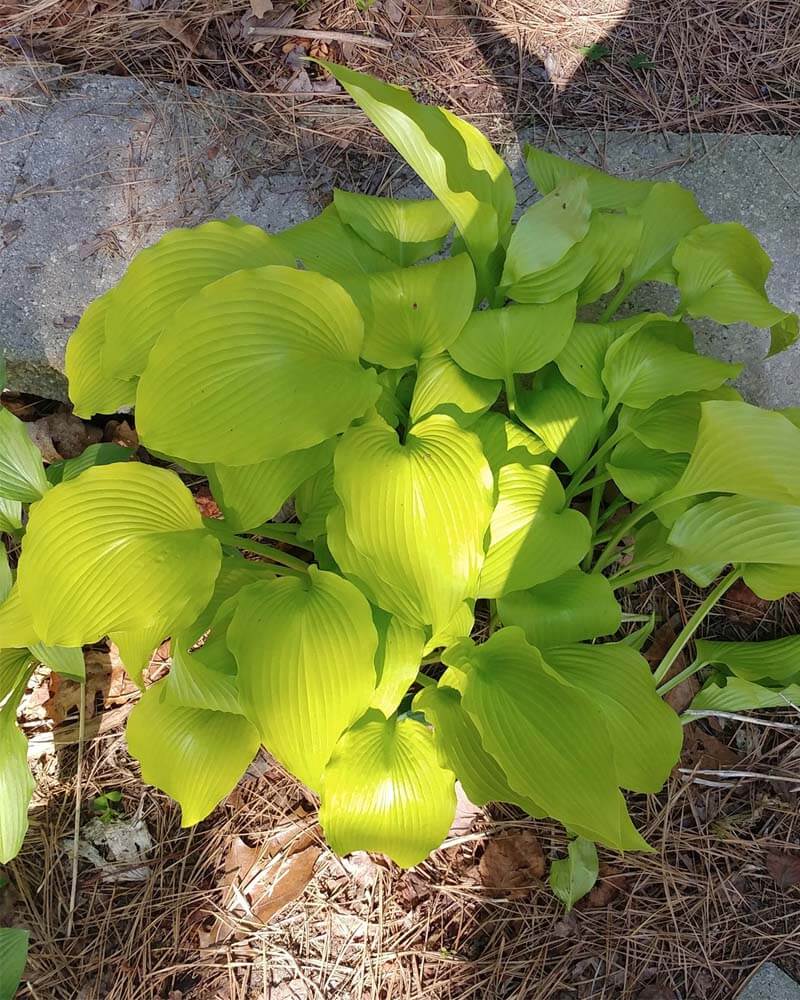 Bri Sun is a wonderful hosta that should be in every garden. First of all because of its lemon yellow color, which looks delightful especially during sunny hours.

Secondly, the number of veins on the leaf is greater than that of other hostas, which makes it very textured and unusual.

As for size, it is a compact variety, up to 2 feet tall and about 1.5 feet wide. It is great for small flower beds. 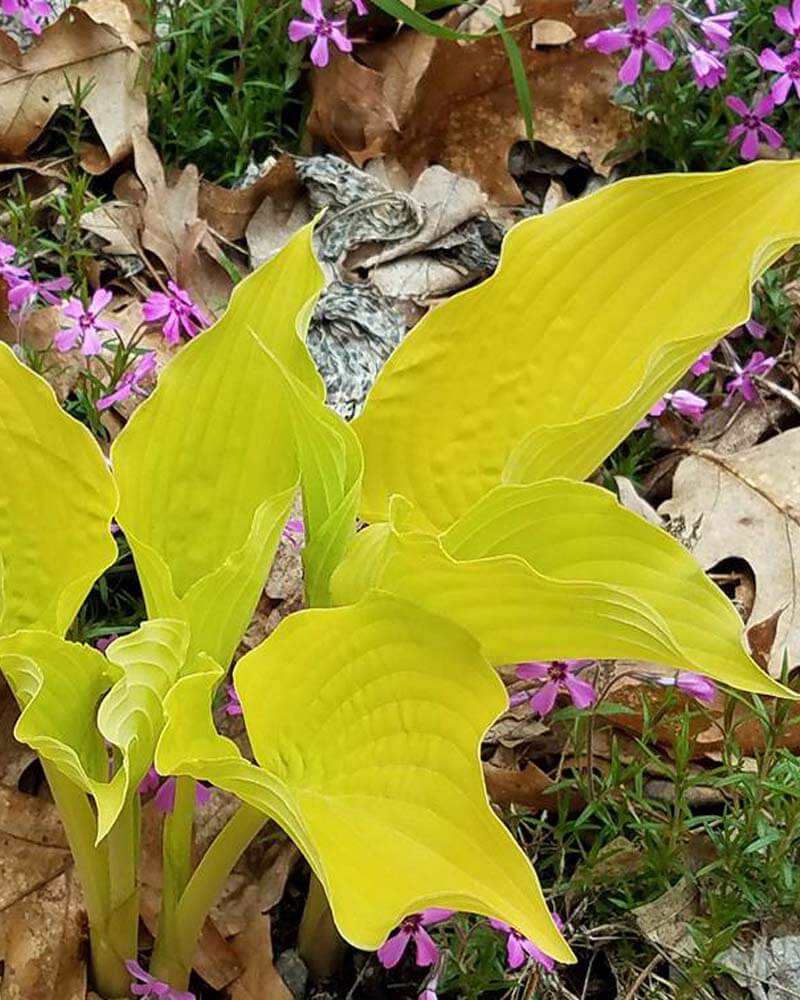 The Burning Desire hosta has golden yellow leaves with a slightly elongated shape. The tip of the leaf is sharp, which gives the hosta even more interest.

It usually does not exceed 2 feet in width and 1 foot in height. It is a great variety to contrast with green and blue hostas. It requires a few hours of direct sun and slightly acidic soil to make the color as rich as possible.

Giant yellow hostas are a completely separate category of hostas. The huge yellow leaves are a fascinating sight, so let’s get started. 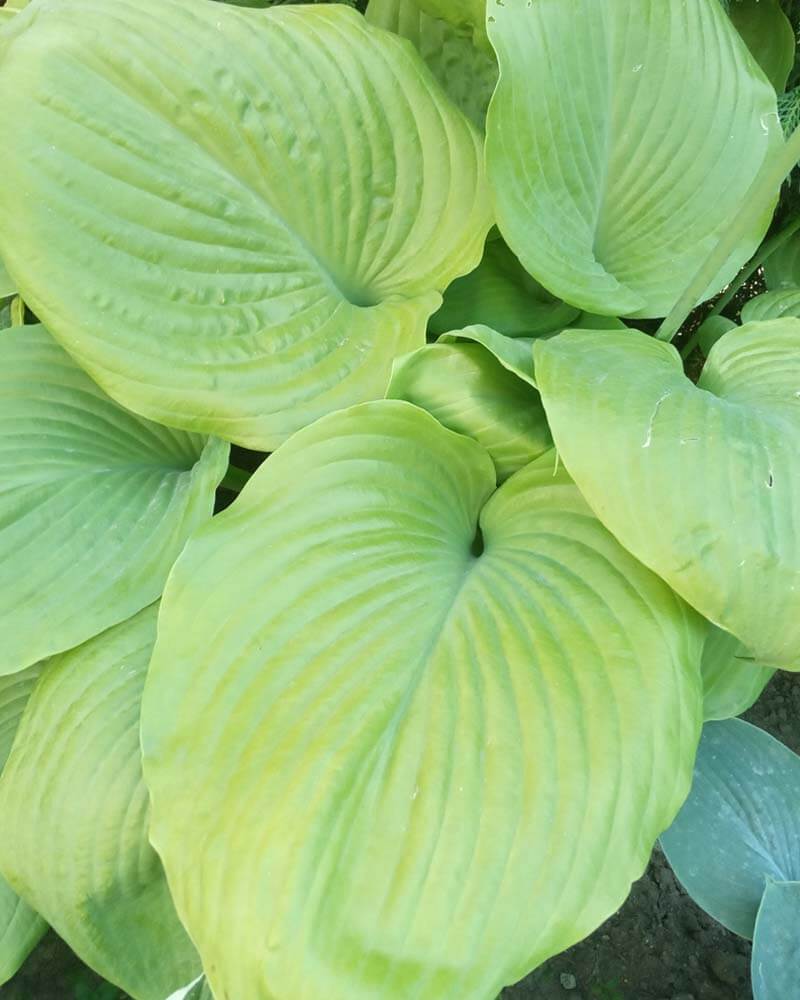 Sum And Substance is a large hosta that can reach about 3 feet tall and over 5 feet wide. It will need plenty of space, nutritious soil and adequate watering to grow.

The leaves can exceed 1 foot across. Their color is yellowish green early in the season, but they turn yellow by summer. The texture of the leaves is very ribbed, which looks delightful in yellow. 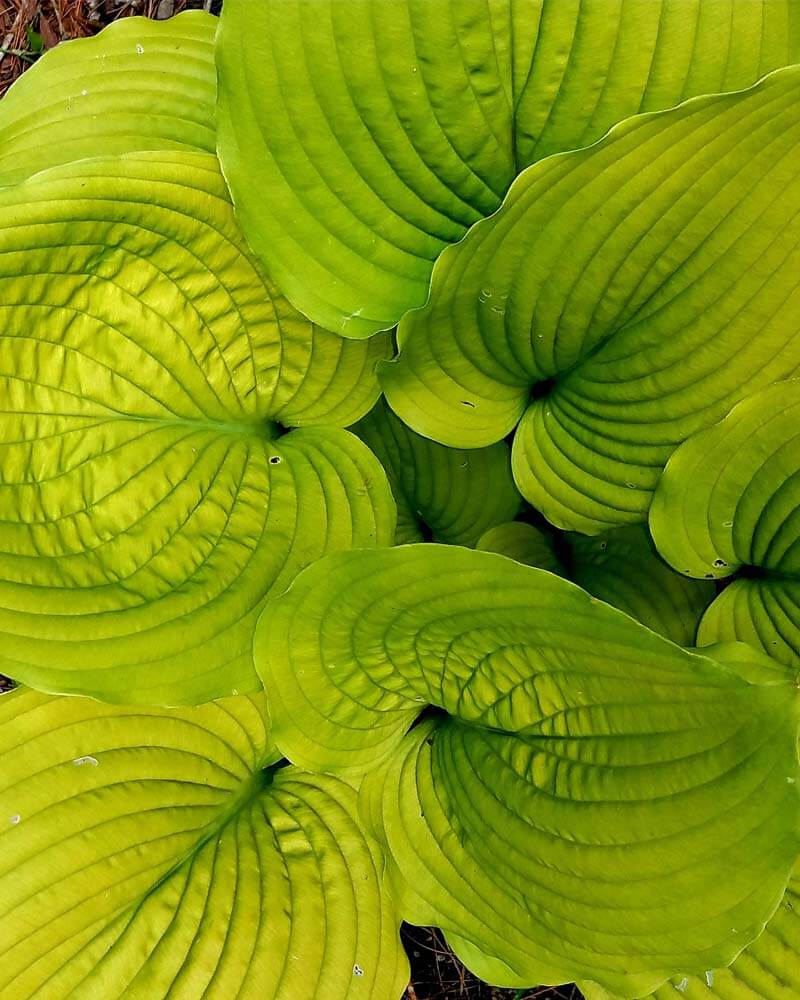 Coast to Coast is the next big yellow hosta. It is usually no more than 2 feet tall while it is about 3 feet wide. The leaves are also huge and can exceed 1 foot across.

The leaf color is yellow with a slight greenish tinge in the center and near the veins. The texture is ribbed as in the previous variety and looks wonderful.

It needs 3-4 hours of direct sun in the morning or evening to make the yellow more pronounced. 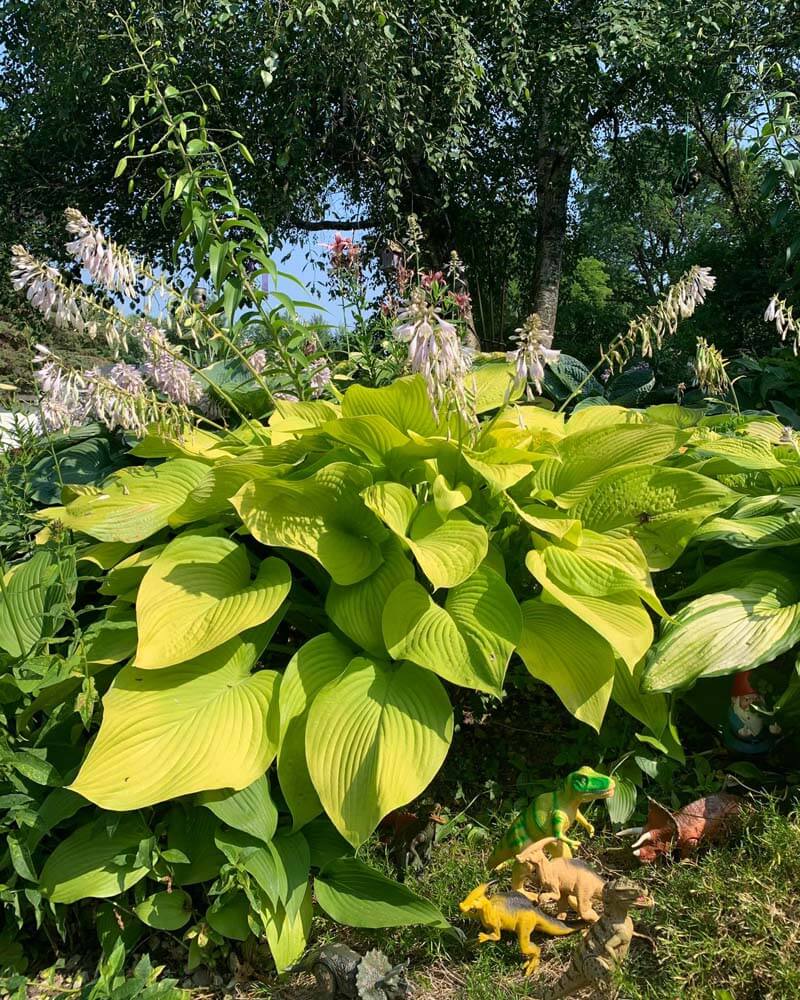 Age of Gold Hosta is a wonderful variety that has really golden leaves. The color is so intense that the leaves seem to shine in the sun.

It reaches a height of about 2 feet and a width of 3 or more. The leaf size is large and the surface is not smooth but veined.

A characteristic feature is the horizontal arrangement of the leaves. Unlike many other hostas, the leaves and stems of the Age of Gold Hosta are very sturdy. As a result, the leaves are held strictly horizontally.

In addition to pure yellow hostas, there are combinations with other colors. Some of the most interesting are hostas with yellow center and a green edge. Let’s take a look at a few of these varieties. 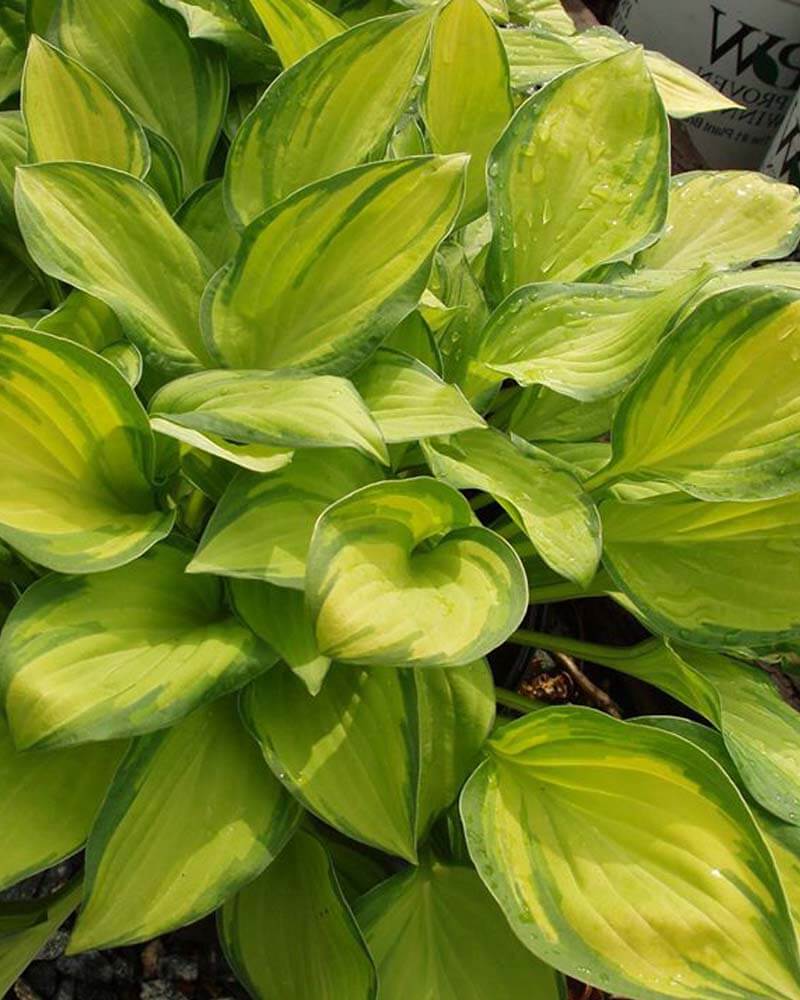 Emerald Tiara is a classic small yellow-green hosta. Its stems reach a height of 1 foot while the width of the bush can exceed 2 feet.

The leaves are small and rounded. Most of the leaf is yellow and only the edge has a bright green edge. The yellow can turn to lime green depending on different conditions.

A very interesting and desirable variety. Great for both small beds and containers. 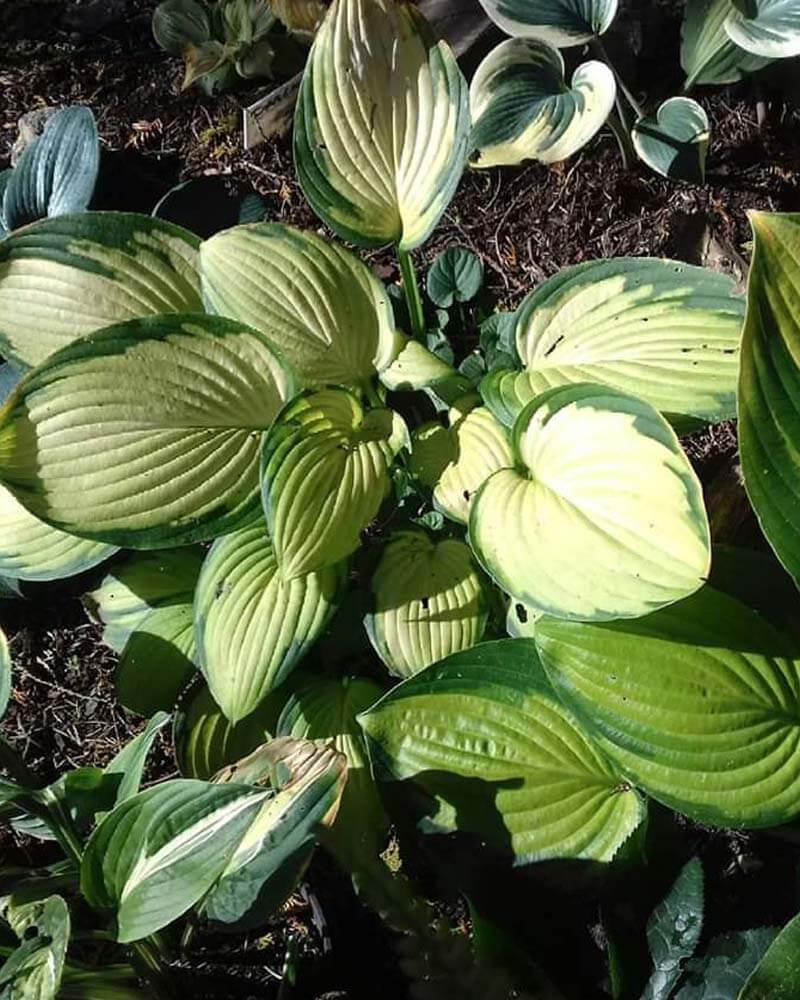 Gold Standard is a very bright hosta. It really is the standard for gold leaf hostas. The middle of the leaf is deep yellow with a golden cast. This delightful appearance is accentuated by a thin green margin.

It is a medium-sized variety. It can reach about 2 feet tall and up to 4 feet wide. It grows very vigorously so requires nutritious soil and watering in dry weather. 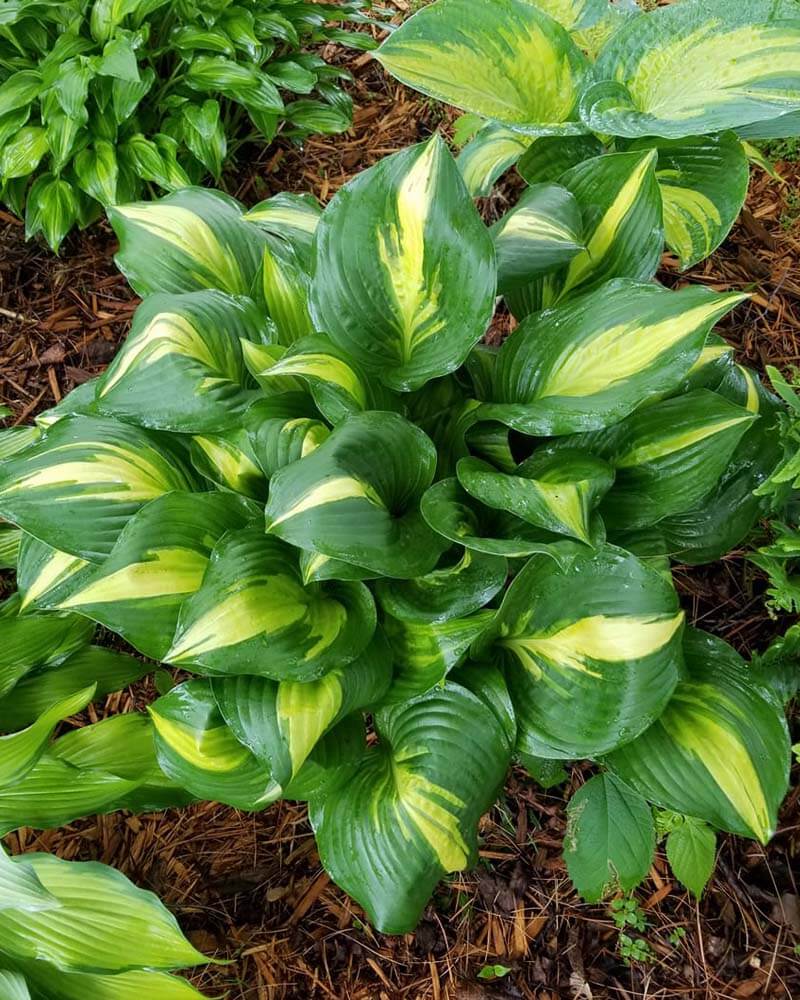 Let me introduce you to another interesting hosta called American Sweetheart. Its leaves have amazing coloring. The center of the leaf is yellow and surrounded by a thick green edge. This makes American Sweetheart a very energetic and unpredictable-looking hosta.

It can extend 3 to 4 feet in width and up to 2 feet in height, so it is medium-sized. Planting it amongst single-colored hostas will give you a great dynamic picture in your garden.

Dwarf yellow hostas are a type of hosta that will not leave you indifferent. What could be cuter than small yellow leaves? 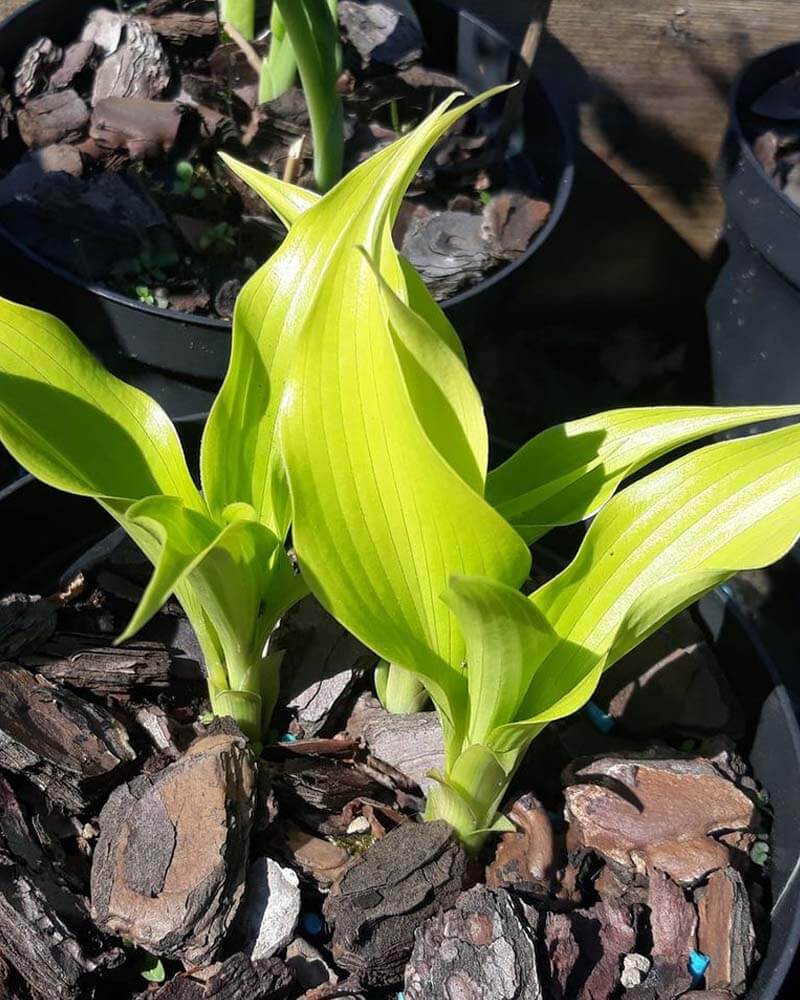 Citric Star is a delightful little hosta. It has slightly elongated, pointed leaves that are bright yellow in early season. The surface is very smooth and shiny.

The size of this variety is really small. It does not exceed 7 inches in height and up to 15 inches in width. A great variety for a small flower bed or container. 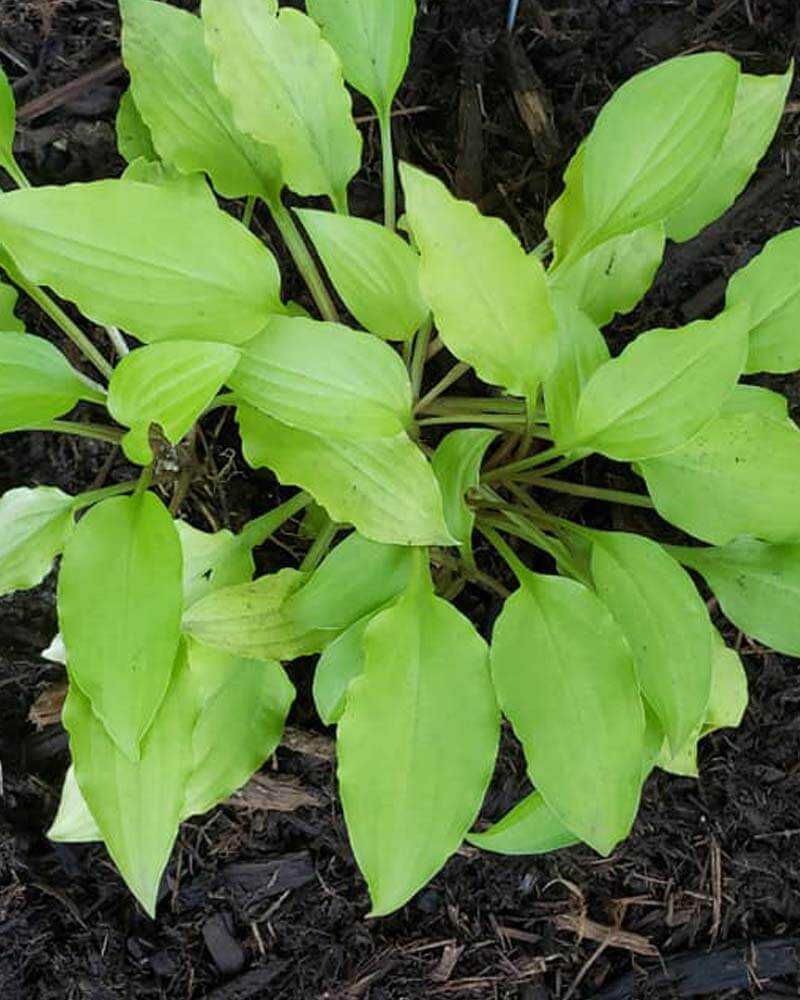 Yellow Boa is a wonderful, compact-sized variety. It grows about 10 inches tall and 20 inches wide. This size makes it much easier to care for.

The leaves are a feature of this hosta. They are narrow and sharp, which gives it a bit of charisma. The color is yellow at the time of emergence, but with time it takes on a slight lime hue. 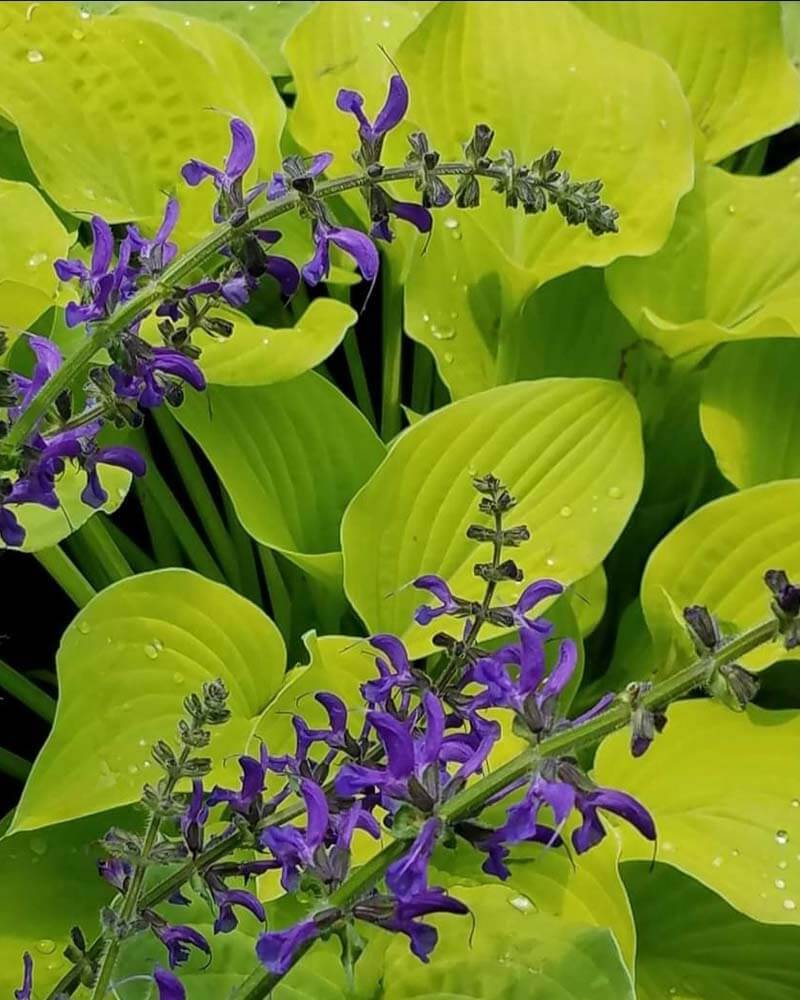 Gold Drop is another dwarf gold leaf hosta. It grows up to 1 foot tall and about the same width. The size allows this hosta to be grown almost anywhere.

The color of the leaves early in the season is golden yellow. Then the color can change depending on the weather. To make the yellow more intense, provide it with about 2 hours of the morning sun.

Gold Drop has very pretty purple flowers on tall peduncles. The flowers make a great contrast to the yellow foliage.

Let me introduce you to one of the most exclusive types of hostas – yellow leaves and red petioles. Such hostas are quite rare and therefore very sought after. 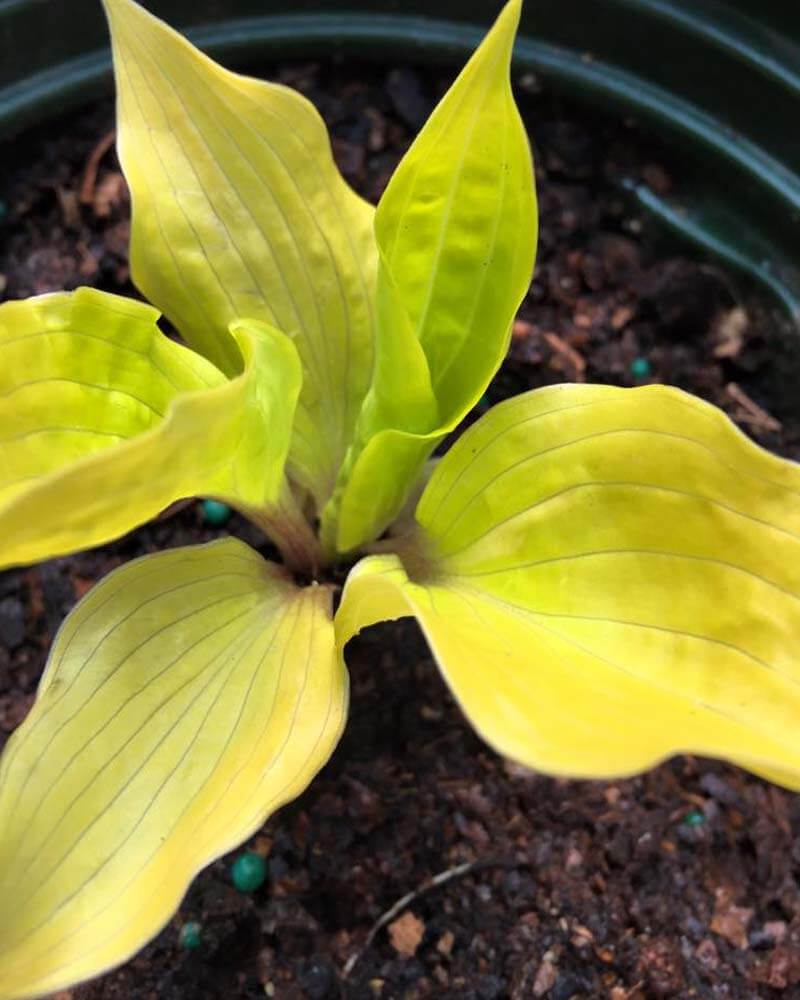 Fire Island is a unique hosta that has leaves that glow a golden yellow color. The leaf shape is heart-shaped with a sharp tip. The yellow leaves are contrasted with the red petioles.

This hosta is almost dwarf in size because it grows to about 1 foot tall and about 2 feet wide.

If you plant this variety in your garden you will get a wonderful yellow spot that will be an eye-catcher. 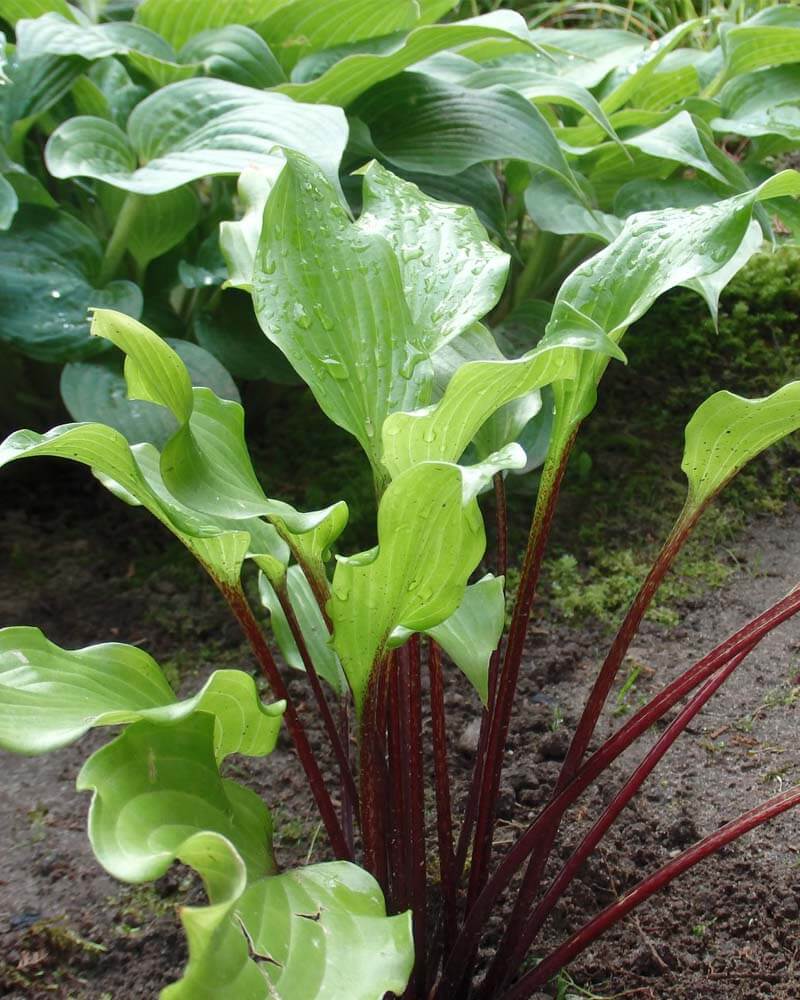 Garnet Crow is another beautiful hosta with dark red petioles and lemon-yellow leaves. The leaf shape is slightly elongated with a sharp tip.

The texture of the leaf is corrugated and the leaf edge is wavy. These two features make it even more interesting. 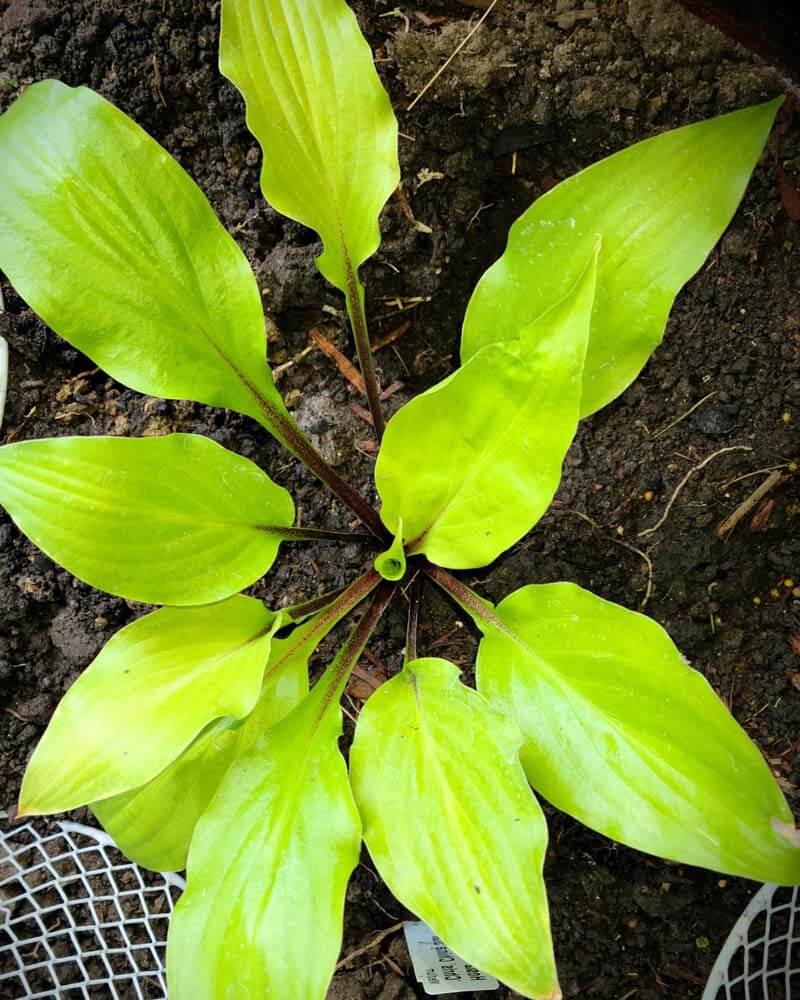 Chris’ China Star is a very interesting hosta with narrow and sharp leaves. The leaves are yellow and the petiole is red. If you look at the bush from above you will see that it looks like a star, hence the name.

It’s a compact hosta because it’s less than 1 foot tall and 2 feet wide. It’s completely low maintenance and can grow where most other hostas do.

The green or blue leaves framed by a yellow edge are really a delightful sight. Let’s take a look at a few hostas like these.

Golden Tiara is a rather large hosta that can reach 2 feet in height and 4 in width. Over time, it forms a beautiful mound of leaves.

The main advantage is the color combination. The leaf is bright green, bordered by a thick yellow stripe. The leaf shape is round and the size is relatively small. All this gives a great view in the garden.

Yellow River is quite an interesting hosta because it has large leaves but the bush size is quite compact. It reaches a height of about 2 feet and a width of up to 4 feet.

The leaves are elongated but not narrow. The color is dark green and rich. A thin bright yellow stripe can be seen along the edge of the leaf. A very beautiful variety for a combination of hostas.

Yellow Splash Rim has narrow, long leaves with a green middle and a thick, creamy-yellow border. The combination of colors looks very bright and vigorous.

This hosta reaches about 2 feet tall and up to 4 feet wide. It is a relatively compact variety for a small garden or even container growing. It needs 4 hours of sun in the morning for a richer yellow.

Medium-sized hostas are those that reach about 2 feet tall and somewhere up to 4 feet wide. In general, this is the most numerous category of hostas. Let’s take a look at the yellowest of them all.

August Moon is a beautiful medium-sized hosta. It reaches about 20 inches tall and up to 40 inches wide. Over time, it develops into a beautiful, voluminous bush.

The leaves are yellow with a greenish tint. The color can change depending on the time of year and weather. The leaf texture is corrugated, which makes it even more interesting.

Colleen Marie is a fairly new variety with beautiful yellow leaves. The leaf size is large and the texture is ribbed. The ribbing is very pronounced and looks delightful in the yellow color.

It can reach about 20 inches high and about 35 inches wide. It does not require much maintenance. It does, however, need nutritious soil and water to thrive. It also needs a few hours of direct sun to get the yellow color.

Fiesta is a great hosta with lime-yellow leaves that have a very thin white edge. This gives it a unique character compared to other yellow varieties. In addition, the texture of the leaf is corrugated.

It can reach a height of about a foot and a half and a width of up to 5 feet. This means it needs plenty of room to grow and a nutritious substrate or annual feeding.