Hostas have an advantage over many perennials, namely the huge number of varieties. There are so many varieties of hostas that it is easy to get lost. Today we are going to look at two popular hostas.

Other differences include size, seeds, and sun tolerance. All of these are described in detail in this article. 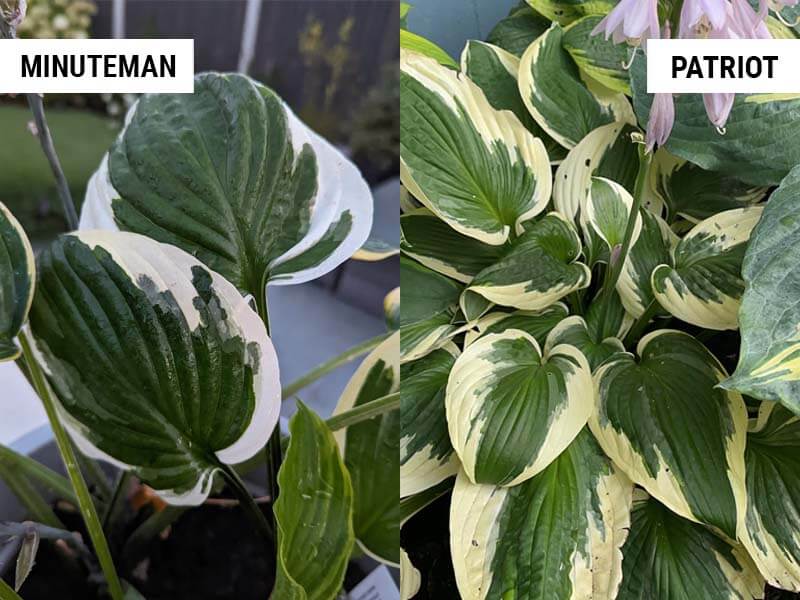 The leaves of these varieties have a number of differences, so let’s talk about that.

First, the Minuteman’s green color is more intense and noticeably darker than the Patriot’s. Because of this feature, the Minuteman leaves are more glossy on a sunny day. Although the green color Patriot is lighter during the season this may change, so sometimes it is very difficult to distinguish these varieties.

As for the edge, both have an irregular edge. However, Patriot has a slightly wider edge which has a creamy hue. The Minuteman’s edge is slightly narrower and usually snow-white.

Second, the Minuteman leaves are slightly smaller than its competitor and reach about 6 inches long. The Patriot leaves can reach over 7 inches long. In both varieties, the leaves may curl and become slightly cupped.

Depending on growing conditions and the age of the plant, the color and even the size of the leaves may differ from the description in this chapter. However, if both varieties are grown side by side in the same garden, it will still be possible to tell them apart. 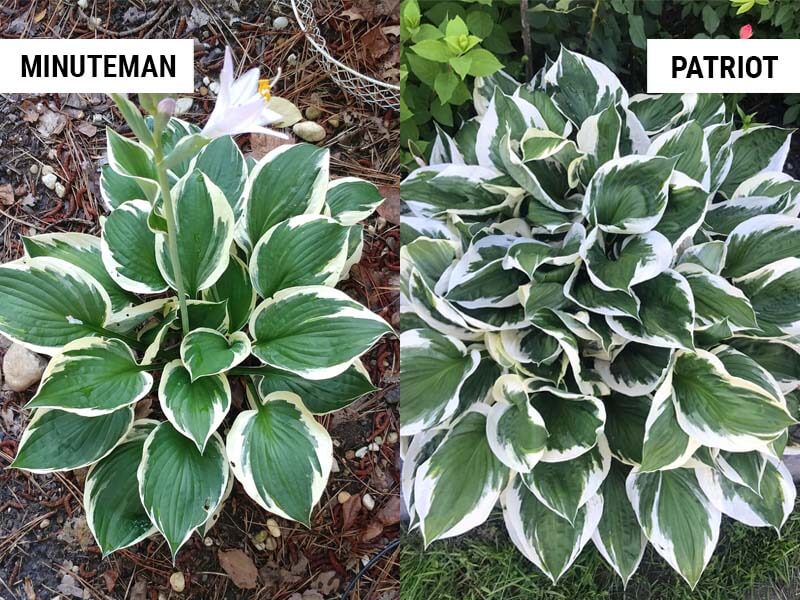 The next difference between these cultivars is size. Again, this depends on many factors, but if both are grown under the same conditions, Patriot will be larger than Minuteman.

At maturity, Patriot can reach about 5 feet in width. At the same time, the height may be about 2 feet.

Minuteman is usually less than 4 feet wide and 1.5 feet high. Dimensions are without flower stems.

It follows that the Minuteman is a bit smaller and requires less feeding and watering. It is also better suited for container growing.

Patriot, on the other hand, requires nutritious soil and sufficient watering. It is better grown in the ground than in a pot. 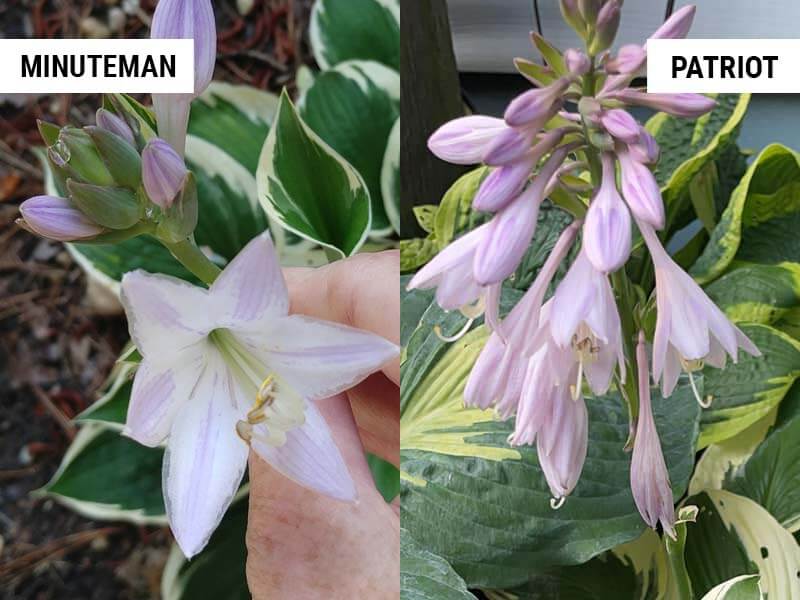 Let’s talk a little bit about the flowers. Both varieties have bell-shaped flowers of a light purple color. They usually have almost no fragrance, but they look delightful.

The flowers are held on long peduncles. As you might expect, Patriot flower stalks are taller and can reach about 3 feet in height.

A notable difference is that Minuteman very rarely forms seed pods. In other words, its flowers are almost always sterile. In addition, the number of flowers on the flower stalk is smaller.

Patriot, on the other hand, produces seeds much more often after flowering. Although there are exceptions. Also, the number of flowers is slightly higher than the competitor.

All in all, if you want a hosta that flowers more abundantly and produces seeds, choose the Patriot.

Patriot can grow in full shade as well as partial sun. It can tolerate about 6 to 8 hours of direct sun a day. However, this also depends on the area in which it grows. The further north it grows, the more sun it tolerates.

Here it is worth mentioning that the less direct sun, the brighter and more contrasting the leaves of both varieties will be. But that doesn’t mean they will thrive in the dark, they still need reflected or dappled sun.

Below we will look at the similarities between the two varieties. There is a lot to talk about, so this part of the article will be just as interesting as the previous one.

Both varieties do not tolerate drought and prefer adequate watering. This is especially important in hot summer weather.

It is best to water them when the soil near the roots is about 2 inches dry. Use 1 gallon of water for each bush. Water in the morning or evening, but not in the middle of the day.

Avoid watering too often as well as watering too much water. If you do not adhere to this recommendation, the hosta may begin to rot and you will lose it.

Also, avoid watering in the winter when there are no leaves or stems on the plant. This is when it is dormant and does not need to be watered.

Both Minuteman and Patriot prefer nutrient-dense soil. Because they are quite large, they need enough nutrients to thrive.

To get such a substrate you need to improve the native soil with organic matter, such as compost. This is best done before planting the hosta. Simply pour about one bucket of compost into the planting hole and mix it with the soil.

In addition to being nutritious, the organic matter will improve the structure of the soil. It will become better drained, which is also important for growing hostas.

Soil rich in organic matter will be lighter and the hosta roots will be able to spread much more easily in it.

In addition to nutritious soil, these hostas like to be fed once a year. Fertilizing in early spring is best. As a result, they will be supplied with minerals throughout the growing season.

The best fertilizer for both varieties is a slow-release mineral fertilizer. Make sure it contains nitrogen, phosphorus, and potassium. The presence of iron and magnesium is also an advantage.

Always follow the label directions and do not exceed the recommended amount of fertilizer. Otherwise, you risk damaging your hostas.

Also, do not fertilize later than mid-summer. Otherwise, your hostas may begin to grow vigorously and not go into hibernation for the winter.