Blue spruces are a very interesting attribute of the landscape. However, these trees are also attractive to other creatures, namely pests.

To treat the Blue Spruce from bagworms, pick them up with your hands and destroy them. An additional action you have to do to get rid of bagworms is to spray the spruce with a pesticide containing Bacillus thuringiensis in early spring.

Below you will find more information about this pest and how to control it. 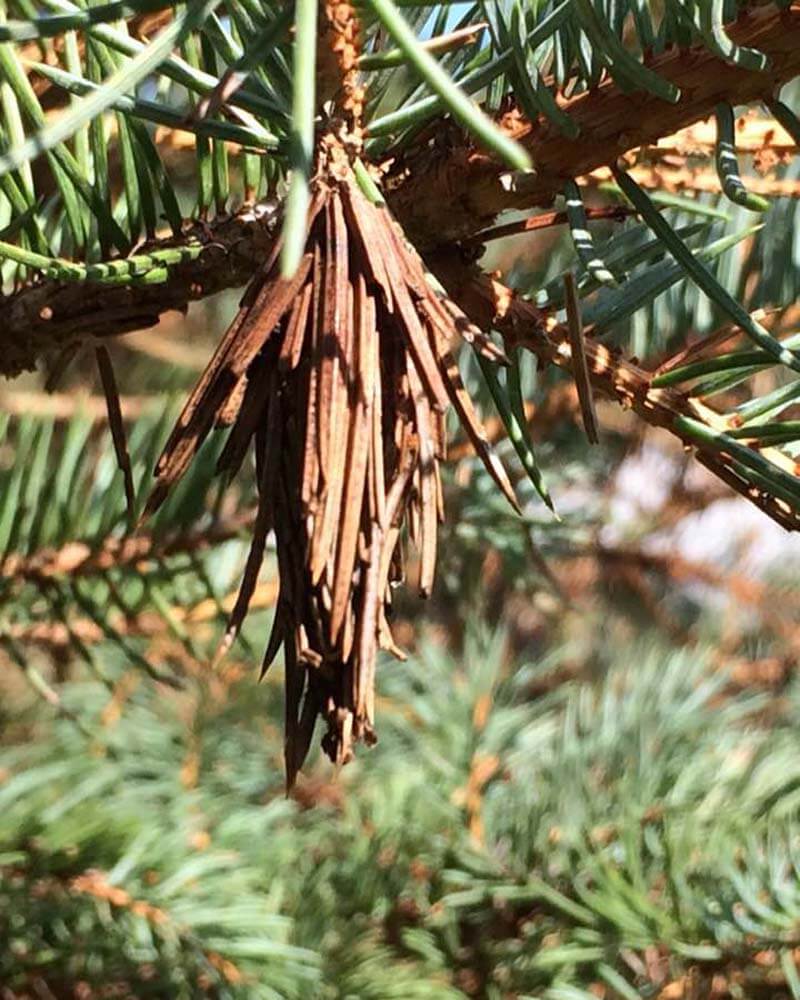 Bagworms are scientifically called Thyridopteryx ephemeraeformis. It is a species of moth that feeds on evergreen trees and shrubs and more.

It starts in the second half of spring when the larvae hatch. Young grubs move up the branch and eat the needles. One caterpillar can destroy a significant number of needles.

Around August, the larvae mature and create a dense cocoon that protects them from enemies. The peculiarity of this cocoon is that the larva uses needles to create it.

As a result, the cocoon is difficult to see because the needles are excellent camouflage. The cocoon is attached to the branch with one end and hangs down.

At the end of summer, mating takes place and the female lays eggs inside the cocoon. The eggs remain in the cocoon throughout the fall, winter, and part of spring. It is only in March-June that the new generation is born. 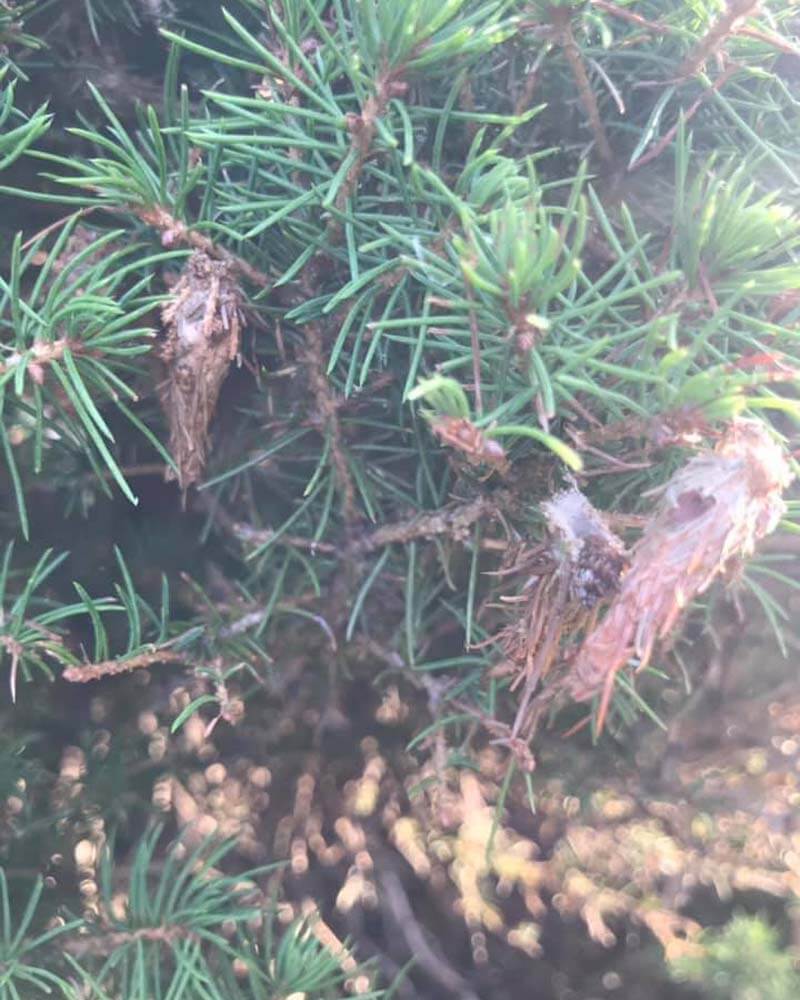 The first sign of the presence of bagworms is small brown spots on the needles. These are damages from young larvae that usually become visible in early summer. The color of the spots can be either brown or light gray.

The second sign is the complete disappearance of needles on the branches. Branches become bare and dry, turning brown. This symptom is more noticeable than the previous one.

And at the end of summer, the adult caterpillar makes a cocoon of needles. The shape of the cocoon resembles a cone that is attached to a branch at one end. The second end points downward.

Cocoon resembles a bag in which hides the insect. Attaching the cocoon to the branch is rigid and it does not wobble in the wind.

The first thing to do to get rid of the bagworms on your Blue Spruce is to collect all the cocoons by hand. Of course, this is not very pleasant, but it is quite effective. If you wear gloves, it will be much more comfortable to work with.

Collect the cocoons once. After some time new ones may appear so collect them again. This procedure may need to be repeated several times. Destroy or burn the collected cocoons.

The second thing to do is to spray the spruce with a biological pesticide that contains Bacillus thuringiensis. These bacteria are very effective bagworms but should be used at a time when the larvae have already hatched but have not yet created their own bags.

Spray Blue Spruce once around the end of April. Repeat the spraying in mid to late May. This will dramatically reduce the number of young grubs.

Spray the needles thoroughly and without sparing the solution. Make sure all the needles are sprayed, even inside the crown.

Both methods work well together and you can get your spruce completely free of these pests.

Instead of a biological pesticide, you can use a systemic insecticide that contains malathion or diazinon. However, when using these products, you should strictly follow the manufacturer’s recommendations on the label.

Bagworms can kill Blue Spruce if their number is large. It will also take some time for this to happen. It is unlikely that these pests can kill a tree in one year.

However, it all depends on how big the spruce is and when the pest is detected.

It all starts with a few cocoons on the tree. Such a small population is not capable of destroying a large tree quickly, but you are unlikely to notice them at this stage.

On a large tree, the presence of bagworms will become noticeable when one or two branches have completely lost their needles. If you act immediately, you can save your Blue Spruce.

At the same time, a relatively small number of bagworms can quickly kill young spruce up to 3-5 feet tall. In this case, you will be able to see their cocoons at the start of their infestation. If you don’t hesitate, you can get rid of the pest in no time by following the recommendations above. 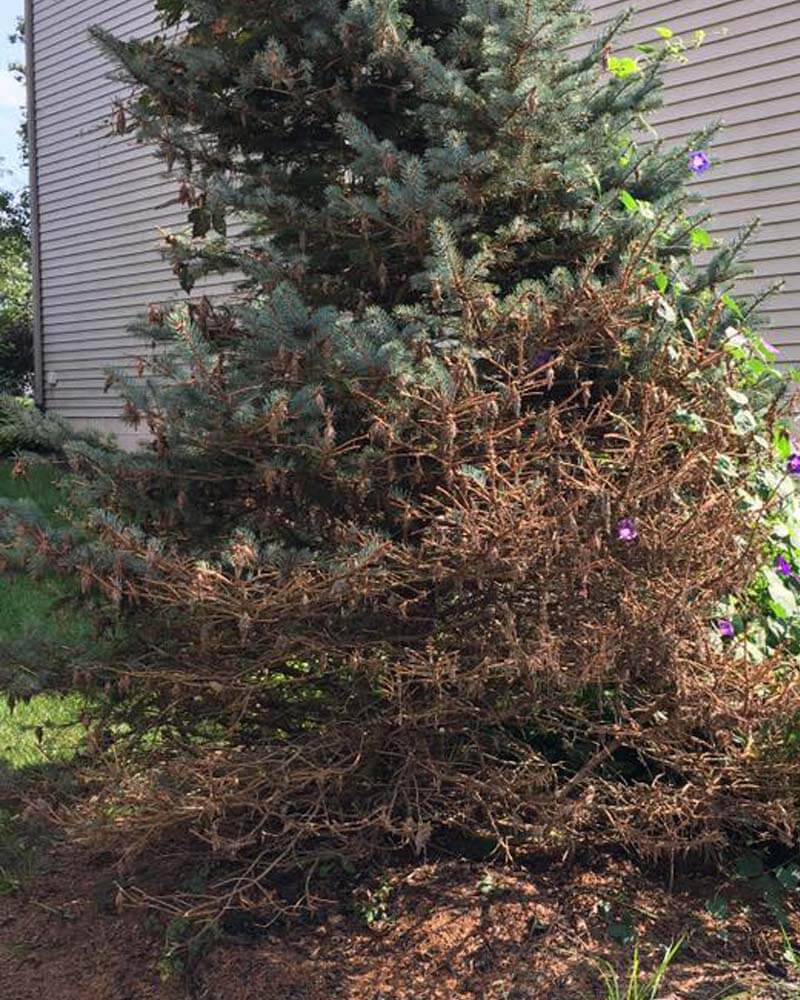 Can Blue spruce recover from bagworms?

Blue spruce can recover from bagworms. However, this depends greatly on how much damage has been done.

If bagworms have destroyed all the needles on a branch, see if the buds are still alive. If the buds are alive, next year they will produce new branches with needles. In this case, it will take many years for the crown to become thick and beautiful again.

If the needles have been eaten and the buds are dead, the branch will most likely die after a while. Depending on how big the branch was, the recovery time will depend.

If there is extensive crown damage, there is no point in expecting the Blue Spruce to be the same. It is best to trim off the lower branches if they are damaged or to use other methods of pruning the Blue Spruce. As a result, you can get your tree into any shape you want.

With minor damage, the Blue Spruce can recover fairly quickly. By the end of the next year, you may not even notice where the damage was. But that’s assuming you get rid of the bagworms completely.

How to avoid infestation?

If you have examples of bagworms infestation in your area you better protect Blue Spruce from these pests.

The first thing to do is to spray the needles with an insecticide every spring. This way you will kill the first larvae that get on your spruce. You will also avoid damage to the needles by other pests.

The second thing to do is to remove fallen needles and other debris from under the Blue Spruce. Very often pest eggs can overwinter in this debris and by removing it you will avoid infestation. Burn or throw away all trash from your yard.