Winter is a time when most plants are dormant. However, not all of them have adapted to survive low temperatures. This article will tell you how to properly overwinter your hostas.

Tips for looking after a hosta in winter

Next, I’ll cover the basic steps to prepare hostas for winter. Also, check out the main article Tips For Keeping Your Hosta Thriving.

This is what a hosta looks like on the eve of winter.

Water the hosta before winter

The hosta needs water the most during the summer months. However, even in winter, it needs water to exist. When the plant is dormant, it uses up moisture, albeit in much smaller quantities.

In winter, the hosta is not able to extract water from the ground, so it consumes its internal stores. In fact, it shrinks in size. Therefore, it needs to store enough water in autumn.

Water the hosta most of the fall until the first frost. Do this when the soil is more than 1 to 2 inches dry. Use enough water to get the soil well soaked.

On the other hand, don’t flood the hostas and don’t water too often as this can lead to rot.

Cut back the hostas for the winter

The next thing you need to do is cut back the hostas for the winter. Removing the dead leaves will clear debris from your garden and avoid rotting around the hosta.

Trim the leaves and leaf petioles of the hosta immediately after the first hard frost. The frost will completely destroy the foliage and there is no reason for it to stay near the rhizome.

Sometime in early fall, the leaves will begin to turn partially yellow, but they won’t die completely until frost arrives. The leaves will nourish the hosta all this time, so there is no need to remove them until the frost kills them.

Cut off the leaf petioles about 1 inch above the ground. Try not to damage the rhizome. Use only sharp and sterile pruning shears for the job.

Very often by winter, there is a dormant bud at the base of each old leaf petiole. Do not damage these buds under any circumstances. Otherwise, crown rotting can occur and the hosta will die.

The second way is not to cut back but to tear off the leaves and leaf petioles. This will allow you to free the hosta from the dead tissue better, although it will be physically more difficult.

Wait until the petioles and leaves are completely dead. Put some gloves on your hands and tear off the petioles where they attach to the roots.

Throw the trash away from your yard. Don’t leave it to rot near your plants.

You don’t want to fertilize your hostas for the winter. This is especially true for products that contain nitrogen.

If you fertilize a hosta at the end of the year, it may stay active and not go into hibernation. Worse yet, young shoots may emerge from the roots. All of this will cause the plant to suffer severely from frost.

To avoid this, fertilize the hosta no later than mid-summer. Never use too much fertilizer or products containing a lot of nitrogen.

It is best to fertilize once a year in early spring. Use a slow-release multi-purpose fertilizer for feeding. Make sure that the product has a balanced ratio of all necessary elements (nitrogen, phosphorus, and potassium).

If you follow the manufacturer’s recommendations and do not exceed the rate, the hosta will have enough nutrition for the entire growing season.

You also need to clean up any possible plant debris around the hosta. This can be fallen leaves, weeds, etc. All of this should be collected and thrown away somewhere far away.

If you leave plant debris around the hosta to rot, it may become diseased and die by spring. In fact, the rotting mass may contain disease pathogens as well as pests. Moreover, it is an ideal environment for nematodes to overwinter.

Also, if you see any roots sticking out of the ground, take some soil and put it on top of them.

Very often the rain washes away the soil near the hosta and the top of the roots may be bare. In winter, such roots can be easily damaged by frost, so you should definitely cover them with soil. 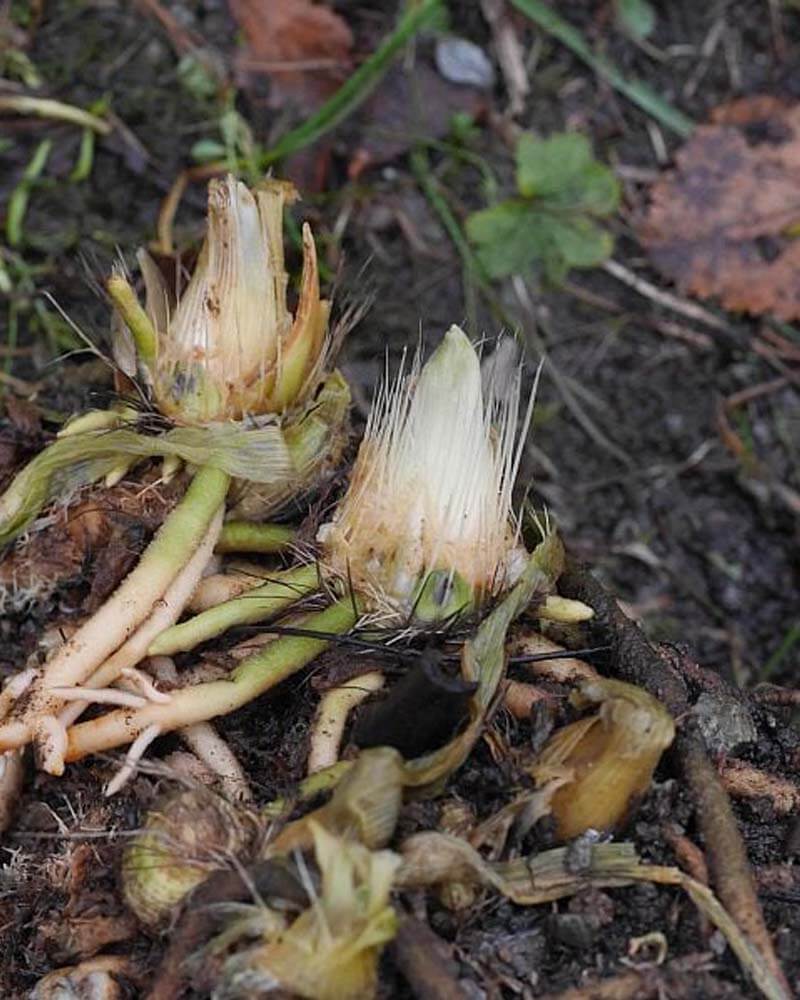 This is what a hosta looks like in winter.

You should definitely mulch your hostas for the winter. Mulch has many positive aspects, the main one being a more comfortable overwintering environment for the plants.

A layer of mulch can trap heat coming from the depths of the ground in the root area. This will greatly improve the situation of the roots during hard frosts.

The best mulch is organic matter. Compost or pine bark works equally well. Make sure the product you choose is pest free.

The layer of mulch should be at least 2 inches. Cover a circle of mulch at least 1 foot in diameter around the hosta.

Also, put some mulch on the center of the hosta, but no thicker than 1 inch. In early spring, remove the mulch from this area to make room for young shoots.

Do not water in winter 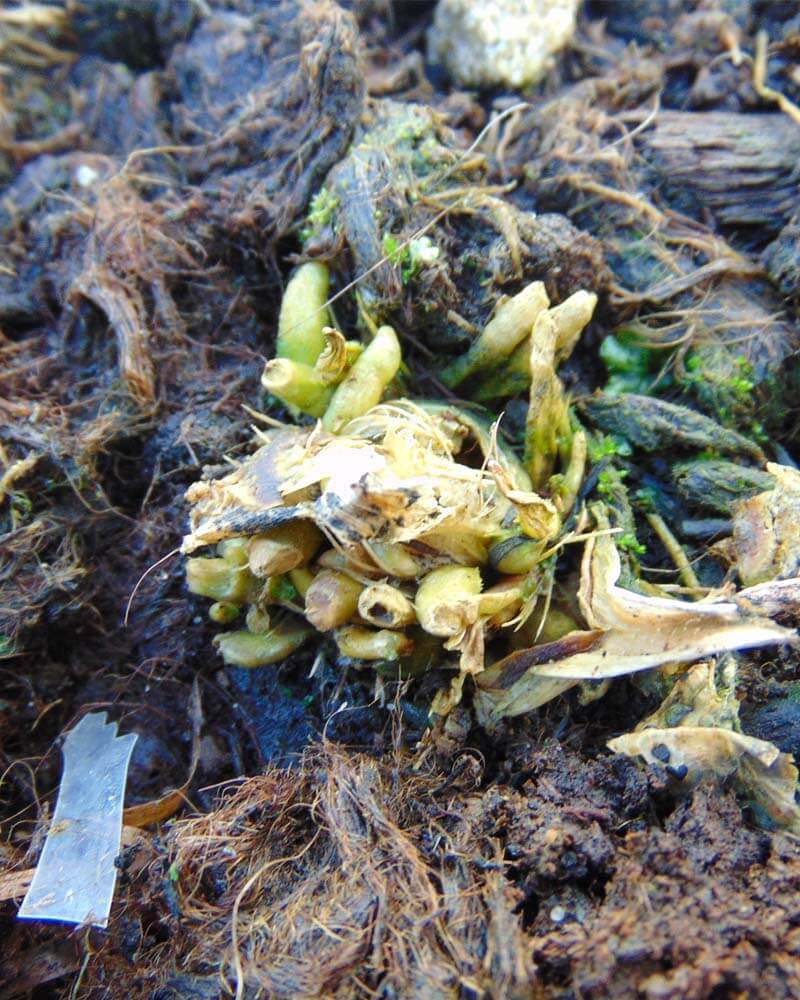 This is what hostas look like in the winter.

You need to avoid watering your hosta throughout the winter. First of all, because it’s usually quite wet in winter and the hosta doesn’t need extra water around its roots.

Secondly, in winter the hosta hibernates and uses the stored water. If you give it water in the fall as I recommended in chapter one, that will be enough.

If you water the hosta in the winter, the soil around the roots will be excessively wet. In a hard frost, the pressure of the soil will damage the rhizome.

During a thaw, the cracked rhizome will begin to rot. By spring there will be nothing left of the plant.

Do hostas die back in winter?

The top part of the hosta dies back in the winter. At the same time, the rhizome that is in the ground remains alive and new shoots will emerge from it next spring.

You can cut off the dead leaves and petioles from the rhizome, but try not to damage the rhizome. Do this in late fall or early winter. Afterward, throw the leaves along with the petioles in the trash.