The more numerous the genus, the more organisms that feed on it. This is absolutely true of the hosta, but there is one type of pest that is very difficult to deal with.

To treat hosta nematodes, cut off the leaves along with the petioles in late summer or early fall. Throw this debris away as far as possible. Next year, in early spring, soak the soil around the hosta with 10% ammonia solution.

All of these can be quite effective in controlling the number of nematodes. Next, we will look at all the ways to deal with this pest. You will also learn what leaf nematodes of the hosta look like and the signs of their presence. 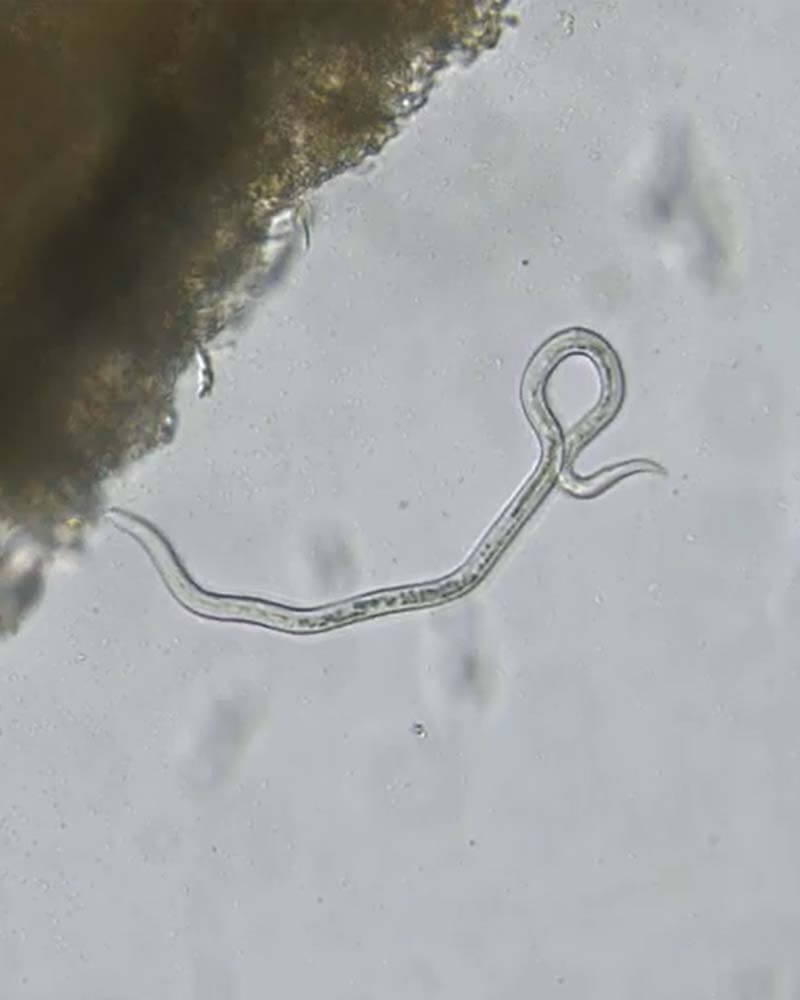 Foliar nematodes are tiny worms that reach up to 1 mm in length. It is impossible to see them with the naked eye. There are several species of nematodes, but those that parasitize on the hosta are called Aphelenchoides fragariae.

These creatures feed on leaf tissue and cause leaf discoloration. There they spend most of the season and reproduce.

Nematodes lay eggs inside the leaf and there they mature into worms. With the coming of autumn, some individuals migrate down to the base of the petioles. Others fall to the ground with the leaves.

These creatures can overwinter in the fallen leaves, the ground around the hosta, and dormant buds. Nematodes do not overwinter inside the tissues but between the folds of leaf buds. They are absolutely not afraid of any frost, they can withstand even the harshest winters.

When spring comes, the leaves unfold and the nematodes begin their way up to the leaves. They move along the petioles from outside the plant. This happens in wet weather or when the hosta is wet from watering.

Then they enter the leaves through wounds or stomata. After that, the life cycle of these creatures repeats. 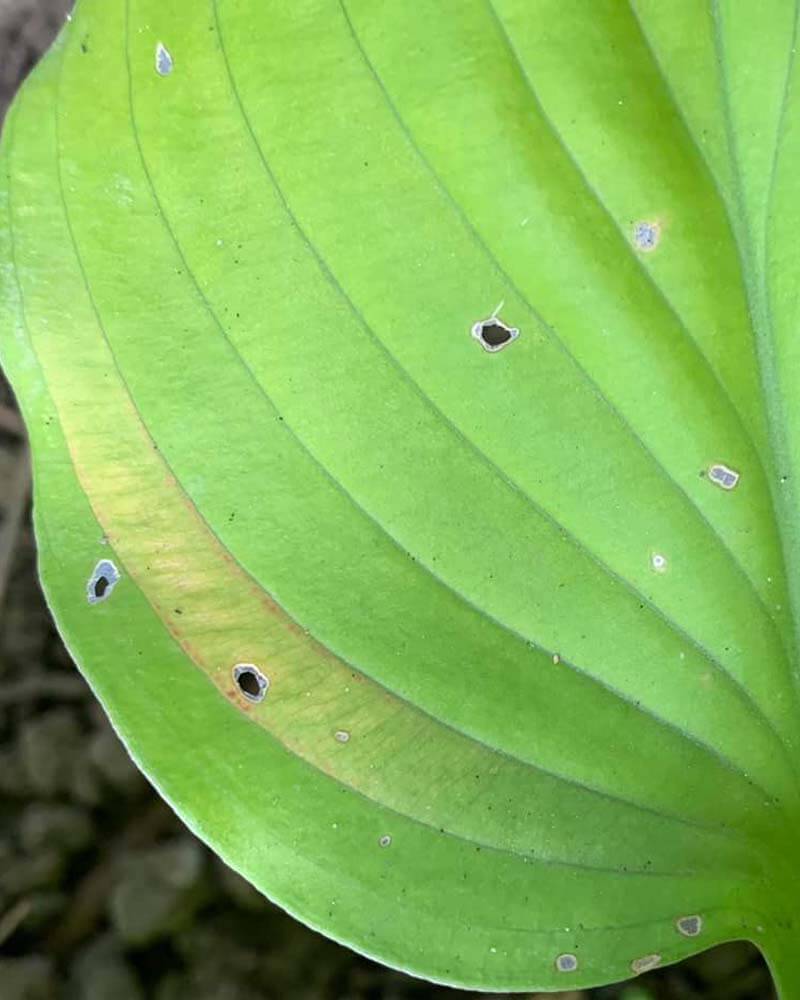 The nematodes enter the leaves around mid-spring, but the symptoms do not appear until early summer.

The first thing you may notice is the yellowing of the leaf between the veins. That is, the leaf can be completely green, but there is a yellow gap between two of the veins. At first, the areas of yellowing are not long, but over time they spread over the entire length of the leaf.

After some time, the entire strip between the veins turns brown. If the infestation is significant, there may be several brown streaks on the leaf.

However, the symptoms of nematode infestation are very similar to those of a disease called Bacterial Leaf Streak. So if you suspect the presence of nematodes, you should have your hostas tested.

Cut off 1 or 2 damaged leaves from one bush. Then cut the leaves into several pieces and place them in a clean glass filled with water. Wait 20-30 minutes and then move the glass to a light source.

Using a magnifying glass, examine the water for microscopic worms. If nematodes are present, you will see them moving in the water.

The magnifying glass should have a 30x zoom. A jeweler’s magnifier is good for this, and you can buy one inexpensively online. 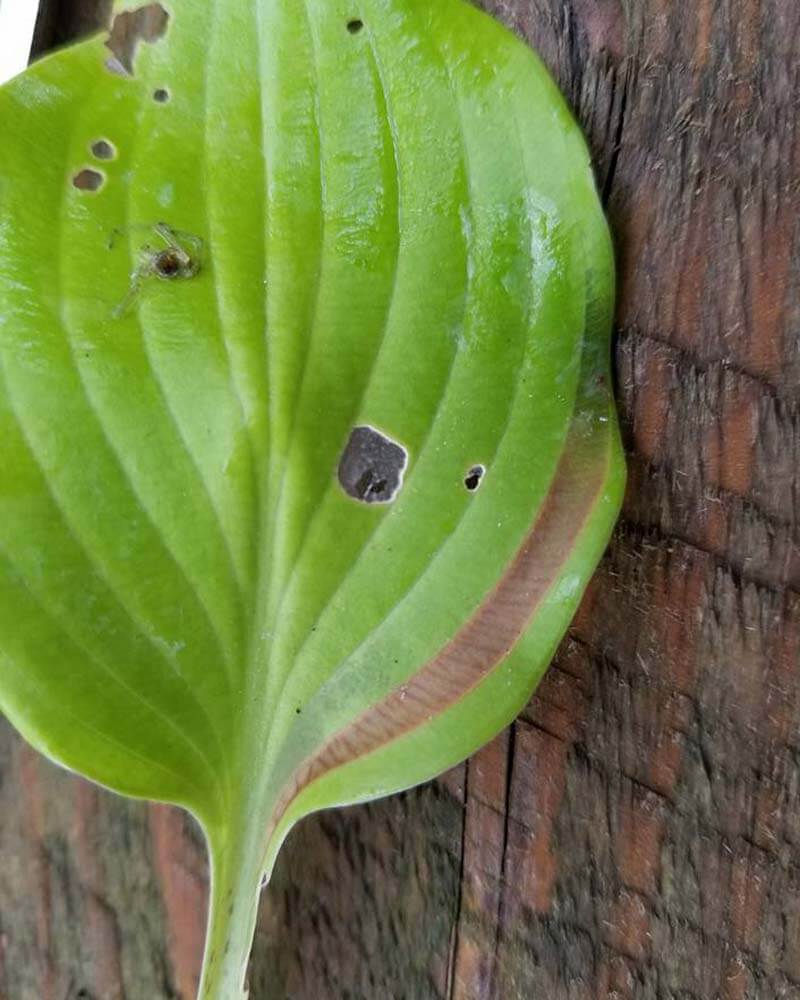 There are several approaches to treating hosta nematodes, but none of them can completely destroy the pest in your garden. Unfortunately, there is currently no chemical that can solve the nematode problem completely, at least not freely available.

But by combining the methods described below you can achieve good results in nematode control. The number of nematodes can be greatly reduced and they will not pose a serious threat to your hostas.

Remove leaves in the fall

In late summer or early fall, the nematodes are still in the leaves. But when the first frost arrives, the leaves will droop and the nematodes will be on the ground. They will be able to overwinter in this condition and climb back on top of the hosta the following spring.

To prevent this from happening, cut off the leaves and petioles 1 inch above the ground. Throw the leaves in the trash or burn them. Never compost such leaves.

This will greatly reduce the number of nematodes in your garden. However, the leaves should be trimmed before they turn yellow. The end of August or the beginning of September is the best time to do this.

Always disinfect the pruning tools for each bush individually. This is to reduce the spread of pests between the hostas.

The second thing you can do is to kill those nematodes that are in the ground around the hosta. You can do this by using ammonia.

Simply drench the soil around the shrub with ammonia in early spring. This should be done before the hosta even begins to grow. Early March is the best time to do this.

Make a 10% aqueous solution of ammonia and treat both the hosta itself and the soil around it. The soil should soak in well because the nematodes can be as much as 1 inch or deeper.

This will kill all the nematodes around the hosta. Only those in the buds between the unopened leaves will remain. You will find out how to deal with them next.

In spring, when the hosta leaves begin to unfurl, it is time to treat them with a nematicide. It is a contact product and when the nematodes touch it they are killed.

It is not a cheap product so it is up to you to decide if it is worth the effort. It is also not easy to get this product because it is used in agriculture to protect crops.

If you decide to use it, time is of the essence. You have to treat the leaves while there are still no nematodes in them. Once the nematodes penetrate the tissues, nematicide will not get them.

It is best to spray the hosta several times from when the eyes appeared. Continue spraying until the first leaves are fully unfolded. Two to three sprays are usually enough.

Heat up your hostas

If the nematodes are in the leaves, they can be killed by heating the hosta. Nematodes do not tolerate heat very well and die fairly quickly if the temperature rises to a certain level.

This is best done when you are transplanting or dividing a hosta. Immerse the hosta, clean of soil, in a bucket of water heated to 130 degrees F for 10 minutes. Then pull it out and place it in a shady spot to cool it down.

Do not remove infected hostas

If your hosta is infested with nematodes, don’t throw it away because it won’t prevent other plants from becoming infested. If nematodes have entered your garden, there will be a million of them by the fall. Removing one or more plants will not solve the problem.

The same applies to the soil. Some experts recommend replacing infested soil with fresh soil. But again, nematodes multiply very quickly and if you follow the experts’ advice, you will have to change the whole soil in your yard after one year.

The best thing you can do is control the number of nematodes by pruning the hosta in late summer, using ammonia drench, and spraying with a nematicide.

How to prevent an infestation?

Do not buy hostas until early summer because this is when symptoms of nematode infestation become noticeable. Do not plant the hosta immediately after purchase. Instead, keep it in a pot away from other plants for 1 to 2 months.

Keep your garden clean. Remove plant debris and don’t let it rot near the hostas. Do not compost hosta leaves or other plants in your yard. It’s best to throw it all in the trash.

To reduce the rate at which nematodes spread, use drip irrigation instead of top watering. If the hosta stays dry, nematodes will have a much harder time penetrating it.

The second type of nematode that can affect hostas is root-knot nematodes. These creatures live on the roots of the hosta and feed on them. As a result, a node called a gall is formed in the affected area.

This type of nematode can infest not only hostas but also many other plants. It is almost impossible to eradicate it completely.

The method of control is to cut off the gall together with the root a little closer to the rhizome. After that, the rhizome must be treated with a nematicide.