In the process of growing plants, there are always some problems and all gardeners face these problems all the time. Today we will look at one of the most common problems.

Winter sunburn and sucking pests are the main reasons why Dwarf Alberta Spruce turns brown. To fix the discoloration, wrap Dwarf Alberta Spruce in burlap over the winter and mulch around the trunk. Also, hose the pests down with water and spray the needles with an aqueous solution of horticultural oil.

These are not all the causes of needle discoloration. Later in this article, you will learn all the possible reasons for the needles turning brown and what to do about it to keep your Dwarf Alberta Spruce healthy. 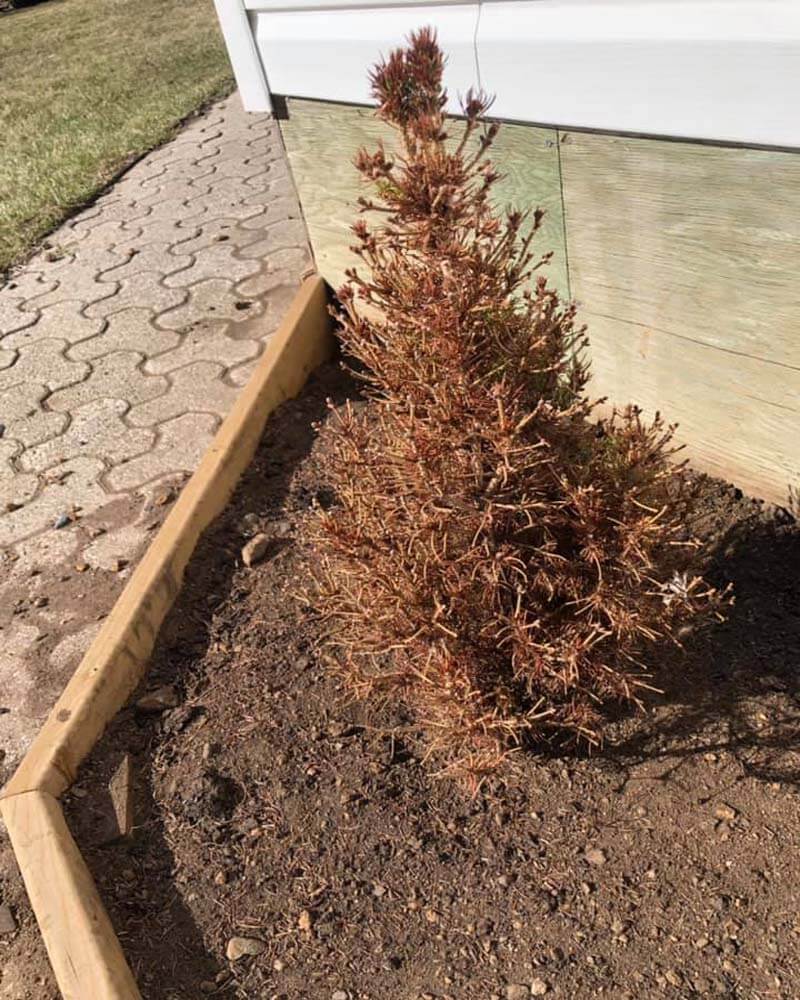 This happens because the tree has an insufficient root system and has stored little water in its tissues for the winter. The root system does not work in the winter and the spruce feeds on the reserves. If the weather is too sunny or windy at this time, the needles can simply dry out.

To avoid this, plant your spruce in a place where it will only be exposed to direct sun for half a day. It is also desirable that the place not be blown through by draughts. There should be some objects around the spruce at some distance to protect it from strong winds.

Also, wrap a frost blanket around the tree for the winter. The material should let in some air so that the needles can breathe. In spring the protection should be removed.

Be sure to mulch the surface around the spruce with organic material at least 1-2 inches thick. 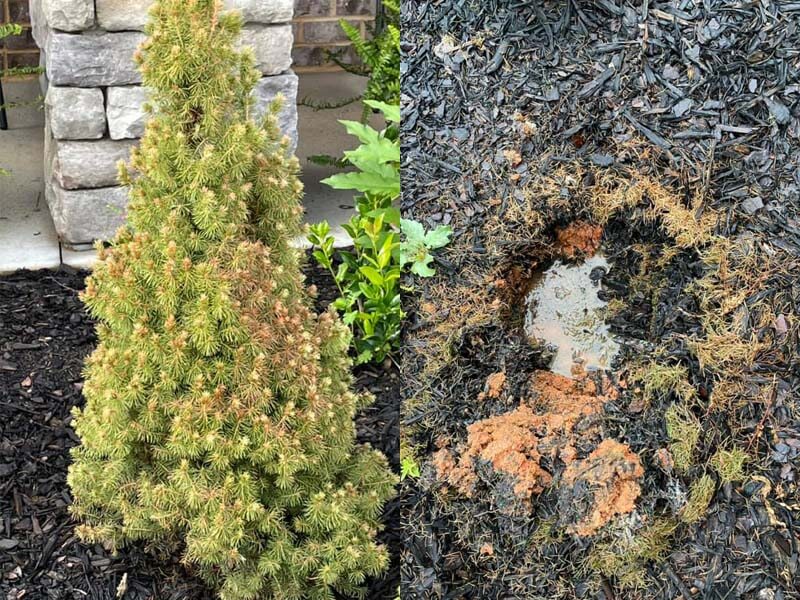 The next thing that sometimes happens to trees is overwatering. As a result, the roots become watery and soft, which reduces their resistance to rot.

If the root system of Dwarf Alberta Spruce begins to rot, the needles will not get any water and will shrivel up and turn brown. This often happens if you water too often or if you set the watering system incorrectly.

To fix this, stop watering frequently. Only water when the soil around the trunk has dried to a depth of two inches.

If some needles are left on the tree and the buds are alive inside, there is a high chance that the spruce will heal from root rot on its own. 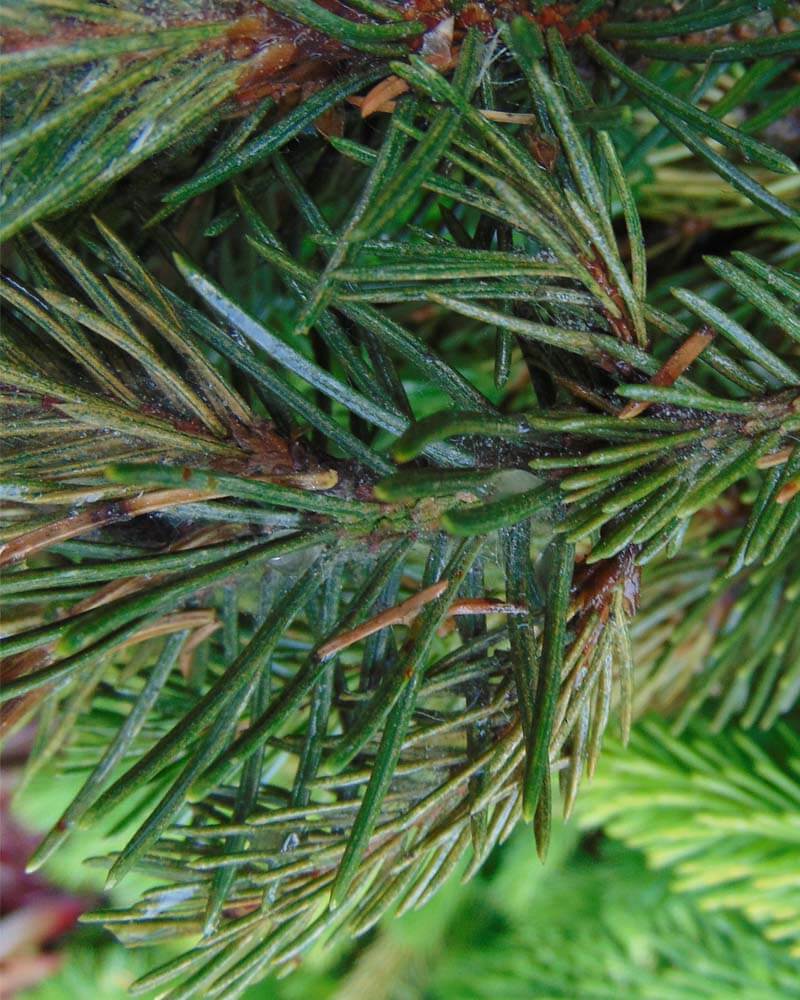 If your Dwarf Alberta Spruce turned brown in the summer during warm and dry weather, it could be because of spider mites.

Spider mites are creatures that parasitize spruce by sucking the juices from the needles. As a result, it turns pale and then dries out turning brown. These pests do not like humidity, so they spread most strongly when it is dry.

Look closely at the needles, if you see between the needles thin cobwebs with white dots it is definitely mites.

To get rid of this pest, wash them off with a stream of water from a hose. When the spruce has dried, spray it with an aqueous solution of horticultural oil. If the mites don’t go away, spray the needles with acaricide (miticide).

The next cause of needles turning brown is dehydration. Very often in a summer drought, spruces do not have enough water and the needles first turn pale and then discolored.

This is most common in the first 1-2 years after planting. Dwarf Alberta Spruce may simply not root until the summer heat. As a result, the roots will not get enough water to the needles and they will turn brown.

To remedy the situation in the first and second years, water the spruce as soon as the soil is one inch dry. Also mulch the soil around it to avoid overheating and rapid drying out.

If you planted the spruce in late spring and very hot summer followed, shade it until fall. You can shade the spruce with a garden umbrella or netting. By fall, the shade can be removed. 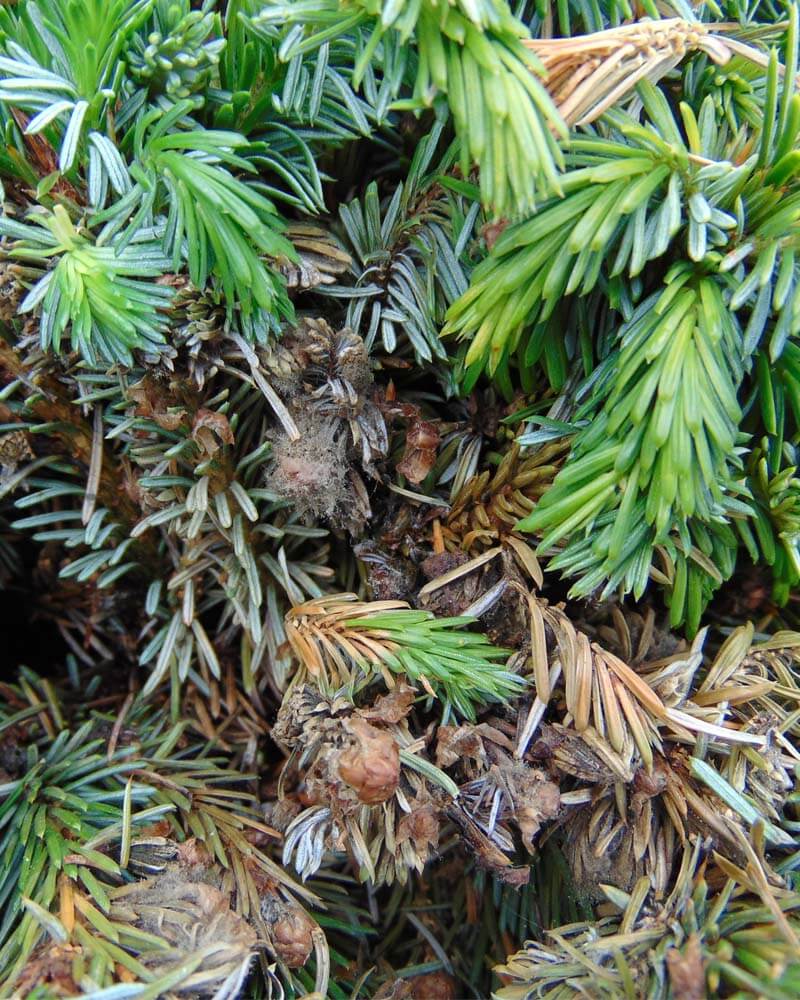 Diseases can also cause the needles to turn brown. There are a number of pathogens that cause spruce diseases. In this case, small black dots appear on the needles. Over time, the needles dry out and change color.

The reason for the large spread of the disease is the lack of sunlight, poor air circulation around the crown, and too high humidity.

To prevent the disease, provide Dwarf Alberta Spruce with at least 4 hours of direct sunlight. Also, avoid planting it very close to other plants.

If you notice symptoms of the disease, spray Dwarf Alberta Spruce with an aqueous solution of copper fungicide. Repeat the spraying after a week.