In my opinion, due to their needles, conifers are one of the most unusual and ornamental plants that are widespread in horticulture.

Today we will look at two popular spruces – Norway spruce and the Black Hills spruce. These are quite different plants, and let’s find out what their differences are.

Black Hills spruce has another name – Picea glauca var. densata. This spruce is a form of Picea glauca. This means that it has several differences that differentiate it from the species but not enough to distinguish it into a subspecies.

Norway spruce is spruce that grows in Europe and has many features that we will discuss below. 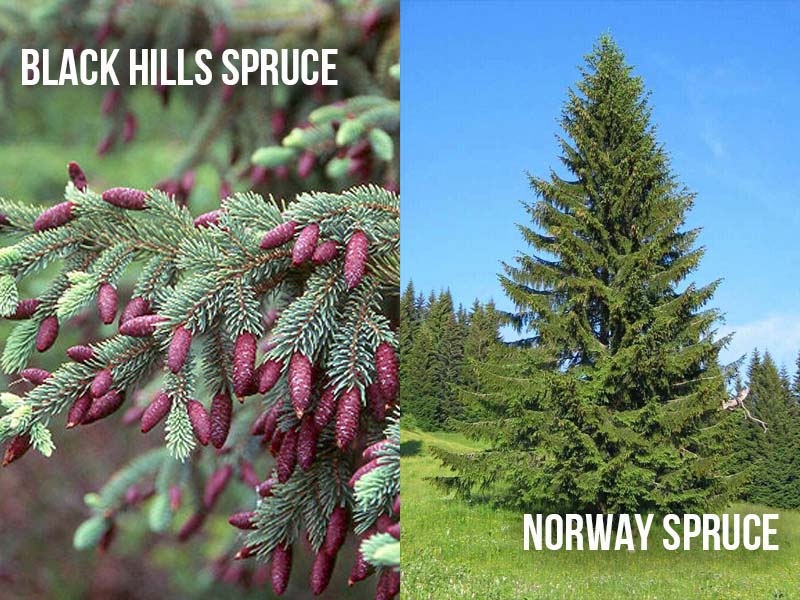 The first significant difference between Black Hills spruce and Norway spruce is the size.

Norway spruce can grow 15 feet in height in 10 years. These spruces are known to be long-lived, so after many years of cultivation, they can reach more than 100 feet in height and 20 feet wide.

On the other hand, Black Hills spruce is more modest in size, and after ten years, its height will not exceed 10 feet. The largest size that these spruces can reach is 60 feet high and 25 feet wide.

The second difference between them is the growth rate. As you can see from the size, Black Hills spruce grows more slowly. Every year it increases by about 8-10 inches.

Norway spruce grows faster; its annual growth can exceed 1 foot and can even reach 1.5 (45 cm) per year.

The next thing that distinguishes these two spruces is that they have different shapes. Black Hills spruce has a lush broad-conical shape; it is dense and full. Simultaneously, Norway spruce is thinner and skeletal (except for varieties of this species). Its shape is mostly narrow-conical or even columnar, and often young branches hang down.

In Norway spruce, the trunk and main (skeletal) branches are visible. Whereas the young branches of Black Hills spruce so much that they hide the trunk and old branches.

From all this, we can conclude that Norway spruce is perfect as a privacy plant. It quickly forms a live screen from neighbors. On the other hand, Black Hills spruce looks better as a specimen plant because of its thicker and more beautiful shape.

They have different needles color

The second sign by which you can distinguish these two spruces is the needles. However, the length of the needles is about the same (0.5 inches). However, some differences are worth talking about.

Black Hills spruce has light green-gray needles; it can even have a bluish tinge with enough sun. The spruce has such an unusual color due to the wax coating on the needles.

Whereas Norway spruce has dark green needles. The green color is rich and looks great.

Black Hills spruce has a little more needles on the branches, and they are a bit thicker. As a result, it looks more lush and dense, which in combination with the bluish-green color makes it more exotic compared to Norway spruce.

As mentioned above, Black Hills spruce belongs to the species Picea glauca. This species is distributed mainly in Canada and, therefore, can withstand very low temperatures. This spruce is recommended to grow from 2 to 6 hardiness zones.

Norway spruce is also a fairly frosty plant. It can be found in northern Europe, where there are also severe frosts, but it is still recommended to grow no further than zone 3.

Most US gardeners do not care that Black Hills spruce is a little more hardy because Norway spruce can also be grown almost anywhere in the country. However, the latter tolerates hot climates a bit better and can be grown in the 7 hardiness zone, and therefore it is available to a slightly larger number of homeowners.

Each of these spruces tolerates both full sun and partial shading. However, Black Hills spruce likes the sun more than Norway spruce.

With enough light, Black Hills spruce will have lush bluish needles, and otherwise, the color will be green, and it will not be dense.

In the case of Norway spruce, everything is a little different. It needs 4 hours of direct sunlight in the north and up to 6 hours in the south. In 6-7 hardiness zones, it should be shaded from the afternoon sun because otherwise, the needles’ color will be pale.

None of these spruces tolerate full shade, and this is especially true of Black Hills spruce. Norway spruce can withstand full shading for a year or two but is likely to die as a result.

The length of Norway spruce cones is 8-10 inches. Sometimes the cones can be smaller, especially if the tree is young. However, in most cases, the cones of this spruce are quite large.

Black Hills spruce, on the other hand, has much smaller cones. Their length usually does not exceed 2 inches.

Yes, the size of the cones has no practical significance. But large cones look more decorative, especially on young spruces, so Norway spruce has a slight advantage here.

Because Black Hills spruce is thicker and denser, it is more prone to fungal infections. The lack of normal air circulation in the crown is an ideal environment for the development of the fungus.

Also, do not forget that pests like dense plants where they can reproduce more quickly.

The first thing to do is spray the spruce at least once or twice a year with a fungicide and pesticide. I recommend using only products from reliable manufacturers. Please do not use the same product often; change them from time to time.

You also need to thin the spruce from time to time if it becomes too thick. Just remove no more than 1-2% of the branches. It would be best if you made sure that the air moves freely through the tree.

As I wrote, Norway spruce grows very fast, so it requires enough space for normal growth. It is best if you plant other plants no closer than 10-15 feet to it.

If you do not have enough space, you can regularly prune this spruce. It is best to do this every spring. Just shorten the shoots to the length you need, and that’s it. This way, you can keep Norway spruce in a small size for a long time.