Snake plant is a very interesting and unusual succulent. Sometimes it is even difficult to determine what type of plant it belongs to. These days the popularity of the Snake plant is only increasing and more and more questions related to the health of this plant arise.

Root rot, dehydration, compact and poor soil, insufficient light, root-bound, and low temperature are the main factors for Snake plant drooping. To fix the drooping leaves water the Snake plant when the soil in the pot is completely dry. Provide an adequately sized pot with drained succulent soil. In addition, the Snake plant should receive at least 6 hours of indirect sunlight per day.

Root issues as a result of excessive watering

Root rot is a real disaster in the plant world. It can happen for a variety of reasons, but most often it happens if you water too often. If the roots are left in wet soil for a long time, they will sooner or later begin to rot. As a result, the internal pressure in the leaves will decrease and they will droop.

This is all the more true of the Snake plant. Because this plant is succulent and therefore has a lower tissue density. As a result, it is easier for fungal diseases and molds to attack it.

The reason for overwatering in most cases is watering the Snake plant on schedule. This is a critical error because in native conditions this plant is very often in completely dry soil. 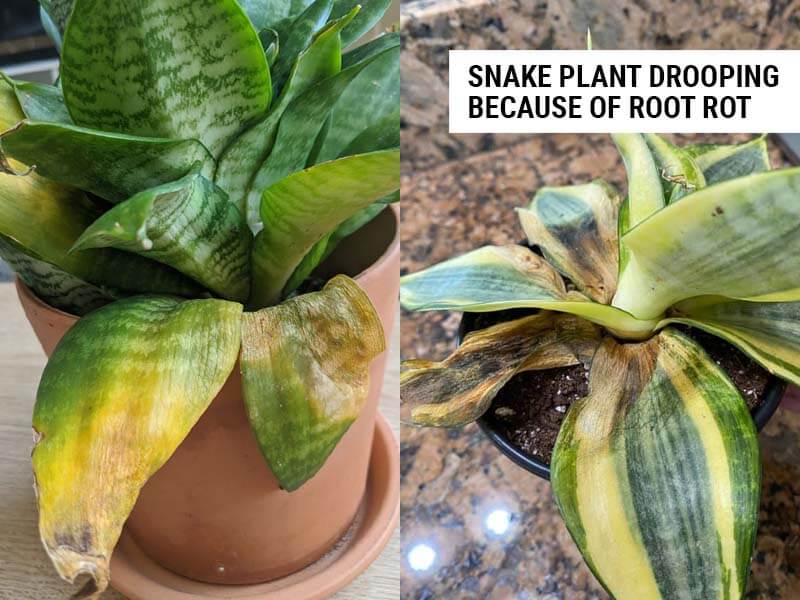 Lack of water can cause Snake plant drooping

Dehydration can also cause the leaves of a Snake plant to droop even though it is succulent. The Snake plant contains relatively less water in its leaves than the Echeveria, for example. If you water very infrequently, the plant may not have enough internal water reserves and the leaves will start to shrivel and droop.

Although this does not always happen, the Snake plant is known to go about a month without water. But this depends on the health and size of the plant. A large Snake plant with succulent leaves, for example, can survive a drought much longer than a young, small plant. 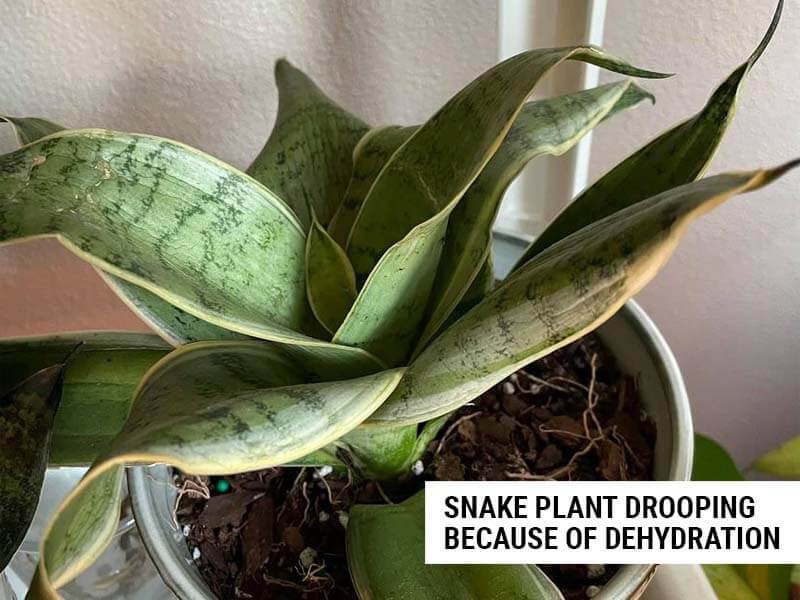 Snake plant drooping because of dehydration.

Not enough or too much light

The Snake plant is one of the few succulents that can tolerate partial shade. It is well known that this plant grows well without access to direct sun, but that does not mean it will thrive in total shade. The Snake plant needs plenty of bright light to grow vigorously. Otherwise, the plant will elongate and droop. 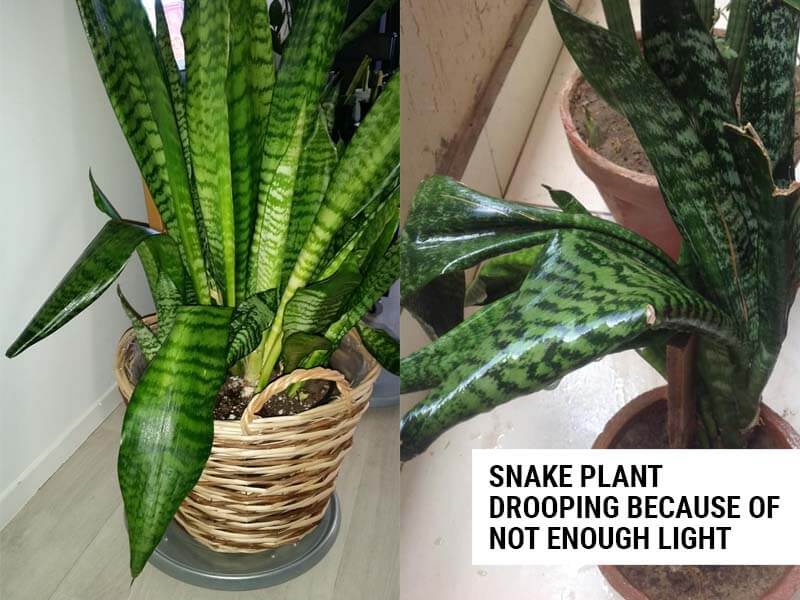 Snake plant drooping because of not enough light.

Rootbound is the next major problem for many potted plants. It is a situation in which there are so many roots in the pot that there is nowhere for them to grow. The roots intertwine and begin to compete with each other, and they also begin to push the soil out of the pot.

All this leads to the fact that the water quickly runs out during watering and the plant does not have time to absorb enough moisture. As a result, the Snake plant begins to suffer from dehydration, and the leaves droop. In addition, not enough soil in the pot will cause a deficiency of nutrients, which also harms the health of the plant. 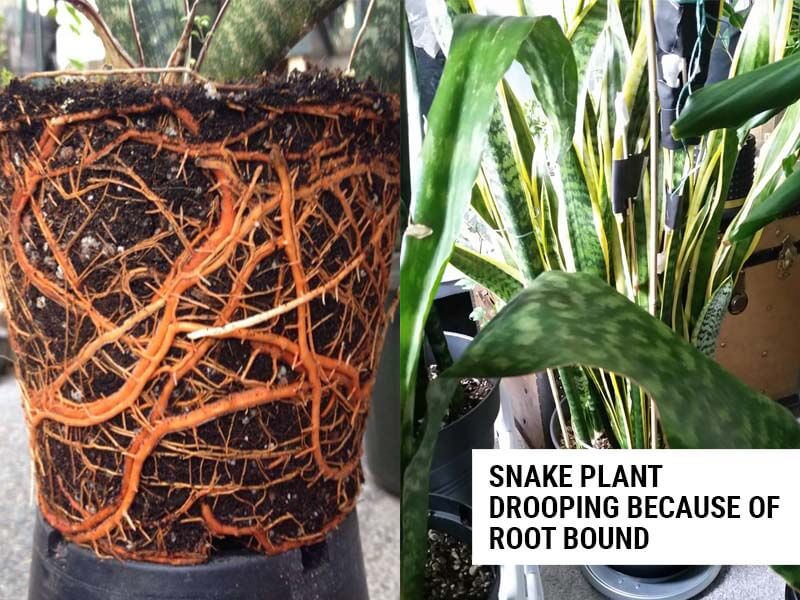 Snake plant drooping because of rootbound.

Even the air conditioner, fan, or refrigerator can be the cause of temperature stress. A few minutes of cold airflow can damage the leaves.

Much rarer, but still possible, is damage to the leaves as a result of extreme heat. This sometimes happens in the summer if the plant is outside, even in the shade. Very high temperatures can cause the leaves of any plant to droop. At the same time, the soil in the pot can be moist, which means that the plant will not feel the lack of water. 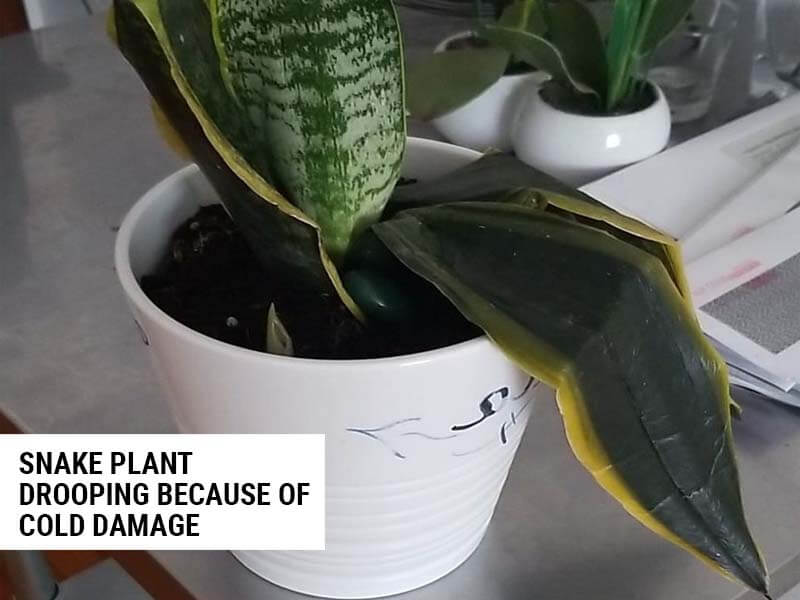 Soil that retains moisture for a long time is absolutely not suitable for growing the Snake plant. Because staying in constantly moist soil, the roots begin to rot and you get the same effect as with overwatering – the leaves will begin to droop and turn yellow.

This can also happen if the pot has no drainage holes. Water can stagnate in the pot even if the holes are there but they are too few or very small.

Another common problem is when the Snake plant grows in a pot that is too large. In that case, the soil will stay wet for a long time, because the amount of soil is large, and a small plant is not able to absorb so much moisture. As a result, root rot can occur. 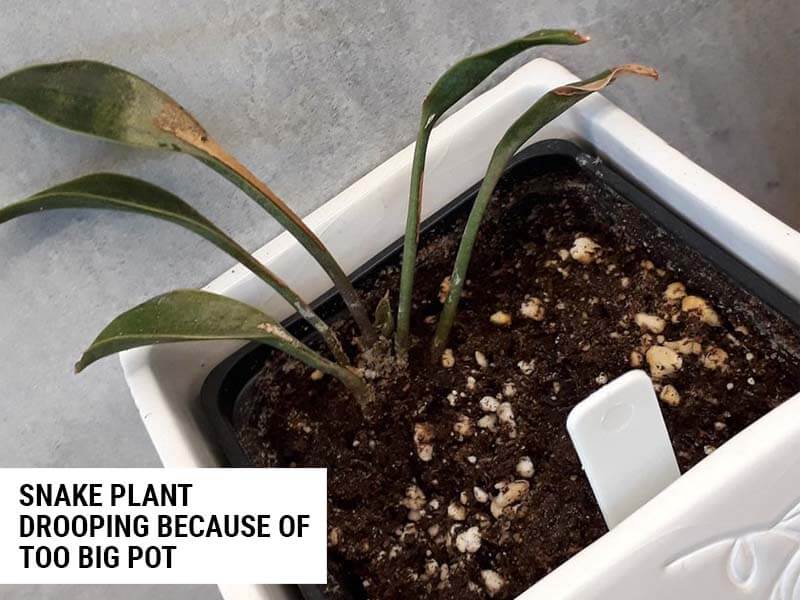 Snake plant drooping because of a too big pot.

One of the most common pests that affect the Snake plant is mealybugs. These insects attack the base of the leaves, but less often they can spread to the middle part of the leaf. They feed on the sap of the plant and those leaves whose base is most affected begin to droop. Other effects, such as browning of the leaves, are also possible.

The second dangerous pest is spider mites. They are very fond of dry room air and can spread quite a bit. The mites also feed on the sap of the Snake plant. The result of this pest is pale green and droopy leaves. 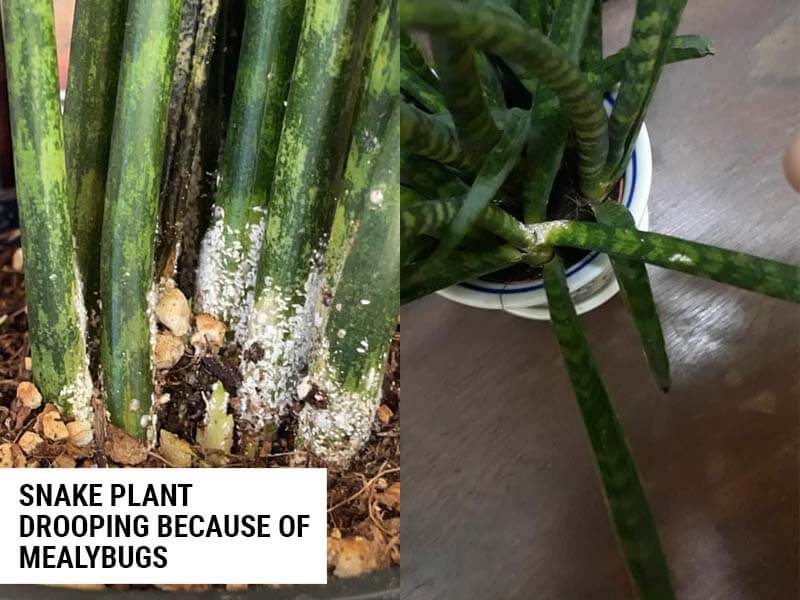 Snake plant drooping because of mealybugs.