Bird of paradise plants produces very interesting flowers that are something unique. They can be propagated very easily but in certain circumstances, you may want to move them to another spot. When you do they can struggle a bit as they adjust to their new surroundings so in this article I will explain how to give them the easiest transition to their new location.

If the roots of Bird of paradise are damaged during transplanting, or it’s done in the wrong season they can experience transplant shock. To reduce the effects of transplant shock don’t water them for the first 2 weeks, and give them a root stimulator, and take care not to damage the roots.

It should also be replanted at the same height it was previously. There are some additional ways to reduce the effects of transplant shock. So, below I will explain what these are, as well as, some guidelines for how to ensure your bird of paradise gets acclimated to its new spot well. 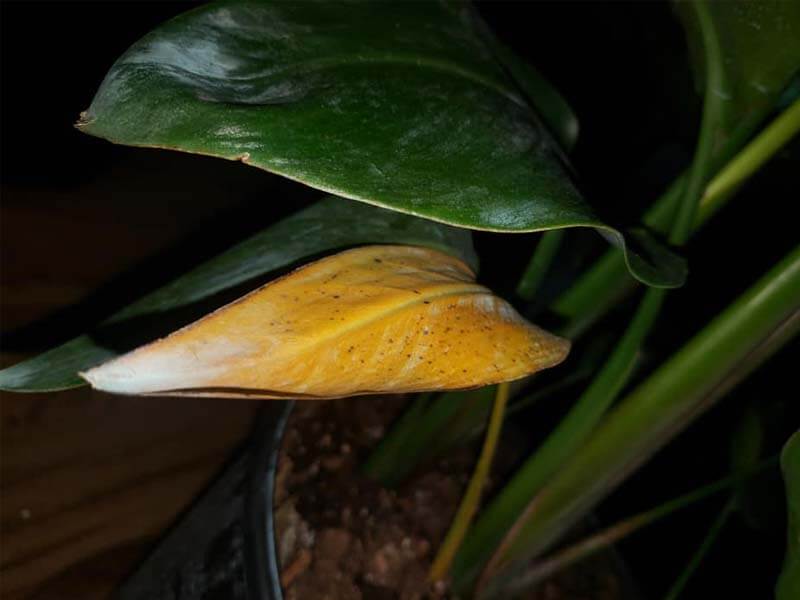 Bird of paradise leaves turned yellow due to transplant shock.

Don’t water them for 2 weeks after transplanting

When most plants are transplanted it’s recommended to water them immediately and give them plenty of water. Bird of paradise plants are a bit different from other plants in this regard, and you should not water them for two weeks after transplanting them.

It’s unclear exactly why this is, however, experienced botanists recommend this timeframe. This amount of time also applies to if you’re propagating bird of paradise plants by removing ‘suckers’ from the base of the plant.

Replant it at the same height it previously was

Bird of paradise experiences the least amount of transplant shock if they are planted at the same height they were previously. Over time a plant adapts to its surroundings. This includes the roots, as well as the individual stems. Therefore, you want to keep the conditions of the soil as close as possible to how they were previously planted.

Doing so will provide the most similar conditions and your bird of paradise can largely keep its same structure, without needing to change much to adapt to its new surrounding. 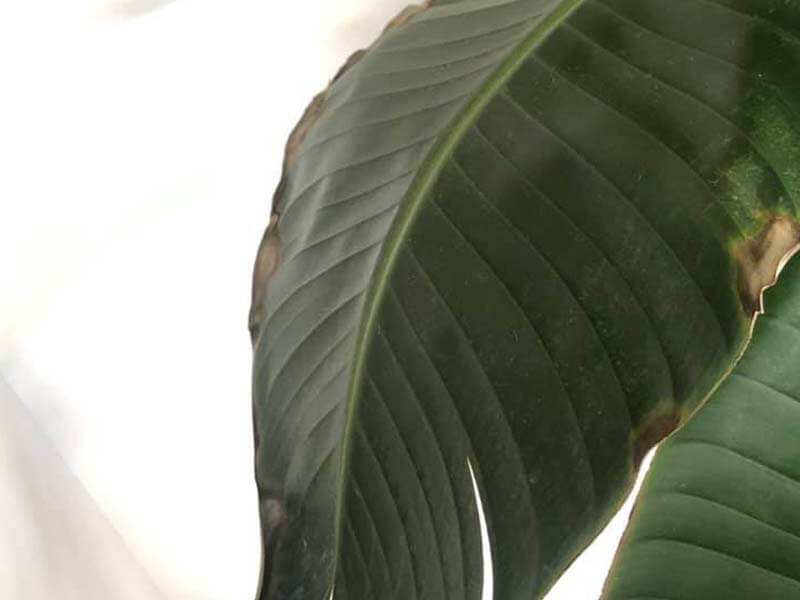 Bird of paradise leaves turned brown due to transplant shock.

Keep as much of the roots as possible

If you’re putting a bird of paradise into a bigger pot because it’s outgrown its existing pot, want to put it into a better spot where it can grow much larger unimpeded, or a spot that is sunnier to maximize its growth it’s important to be careful with the roots as you dig it up or take it out of its existing pot.

Bird of paradise plants prefer very loose soil, so you can take it out from where it is some of the soil will naturally fall away. But, it’s perfectly fine to keep as much soil around the plant, unless you discover an insect infestation or are having a mold problem. If you do then it’s best to treat it as you’re transplanting it with fungicide or insecticide.

The roots are the primary way that a plant uptakes the nutrients it needs and they are quite delicate. Therefore, be as careful with them as you can. With that being said bird of paradise is relatively hardy and fast-growing so they will bounce back quickly if you accidentally remove more of the roots than you intended to.

Don’t transplant them in autumn and winter

Bird of paradise are tropical plants, and you may be living in a tropical state such as Florida or a state that’s sunny year-round such as California. If this is the case you generally don’t need to be too concerned with when you transplant it. However, it’s typically best to transplant it during the warmest part of the year in these tropical/subtropical states.

However, in temperate climates that have 4 seasons, it’s best to transplant them in spring and summer. During these months Bird of paradise experiences the most growth. And therefore, they’ll recover from transplant shock the fastest. The increased temperature causes chemical reactions in the plant to occur at a higher rate.

In autumn and winter when the temperature is cooler Bird of paradise grow more slowly. Therefore, they will take longer for and damaged roots to grow back. As well as, for the roots to adjust to the new surroundings. 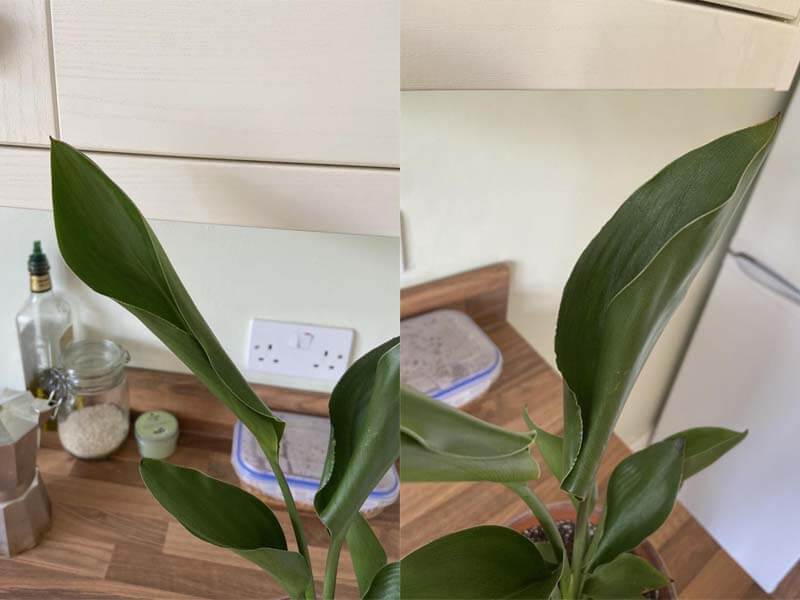 Bird of paradise leaves curled due to transplant shock.

Prune away dead areas leaves and stems before transplanting

As you may know, if you’ve had your Bird of paradise for some time or if you’ve done some research ahead of time Bird of paradise plants do best when the dead leaves/stems are removed from the plant. They can be torn off the side, or trimmed close to the base.

This increases airflow, which is healthy for the plant. And where leaves are almost dead stops the plant from putting additional resources into the stem/leaves when it’s going to fall off anyway. This maximizes the resources available to it to put into new growth, and repair damage to the roots which invariably happens when they’re transplanted.

Remove spent flowers to reduce the energy it spends on them

Flowers that have bloomed for some time and are beginning to die should be removed during transplanting. New growth on Bird of paradise comes from the base of the plant. Therefore, you want to trim off the flowers from the very bottom of the plant.

Doing so will conserve the energy of the plant. This allows more of the plants’ energy to be put into the roots which are typically damaged during transplanting. And otherwise giving it more energy to adjust itself to its new surroundings.

Use a root stimulator to improve root growth

Root stimulators are well known to be effective at stimulating root growth and come highly recommended by scientists and botanists alike after transplanting a plant. Bird of paradise has quite a small rootstock compared to the size of the stems and leaves. And their roots grow relatively quickly. However, a dosage of root stimulator is definitely recommended to help it to adjust, and reduce the effects of transplant shock.

They are a concentrated liquid that you mix with water and pour at the base of the plant. I’ve yet to find one specifically designed for Bird of paradise or costus – which is the botanical family of plants that Bird of paradise are in. If you can find one I would suggest using that, however, a generic root stimulator will work perfectly fine. 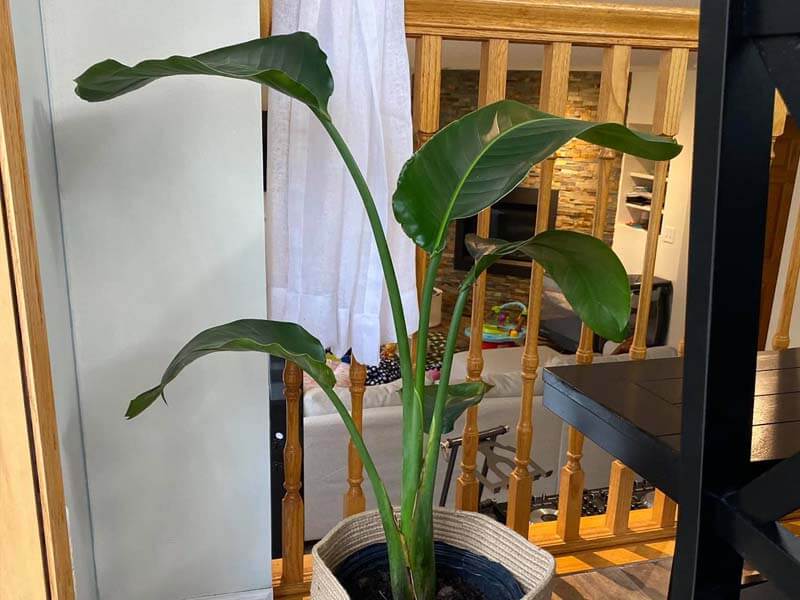 Bird of paradise drooped due to transplant shock.

This reduces the amount of energy available to a Bird of paradise plant. It generally isn’t a make or breaks for the plant. However, when it’s experiencing transplant shock, it’s best to ensure that the leaves are clean aren’t dusty.

Also, Bird of paradise tends to grow with the leaves clumped together. And leaves and overlap with each other. This causes some of the leaves to get sunlight, whereas, others do not.

Adjust the leaves, and tie them loosely with a piece of string to each other, a fence, or install a trellis or stake. Do so in such a way that each individual leaf gets the most sun possible. This will give your Bird of paradise as much energy as possible which really helps with transplant shock.

Because of the fact that Bird of paradise plants should not be watered for the first 2 weeks after transplanting, it’s a good idea to mist the leaves with water. Some of this water is absorbed by the leaves. Also, tropical plants do best in a tropical climate and don’t grow as well in dry climates. This is due to the heat, as well as, the humidity.

You may already do this for your Bird of paradise but this goes double for when it’s been transplanted and is experiencing transplant shock. Therefore, you should use a mister and spray the leaves and stems lightly especially on the hottest of days. But, don’t mist them so much that it waters the soil for the first 2 weeks.