Once again I come back to the beautiful plants – Philodendrons. Earlier I had already written a comparative article where one of the main stars was Philodendron Prince Of Orange.

Today we will compare this variety to another equally popular Philodendron by the name of Autumn.

Happy are those people who live in tropical climates, they can grow large-leaf philodendrons outside in huge pots and get great results.

But we who live in relatively cold climates have to hide these wonderful plants at home. That doesn’t stop us from enjoying their huge, colorful leaves year-round, though. 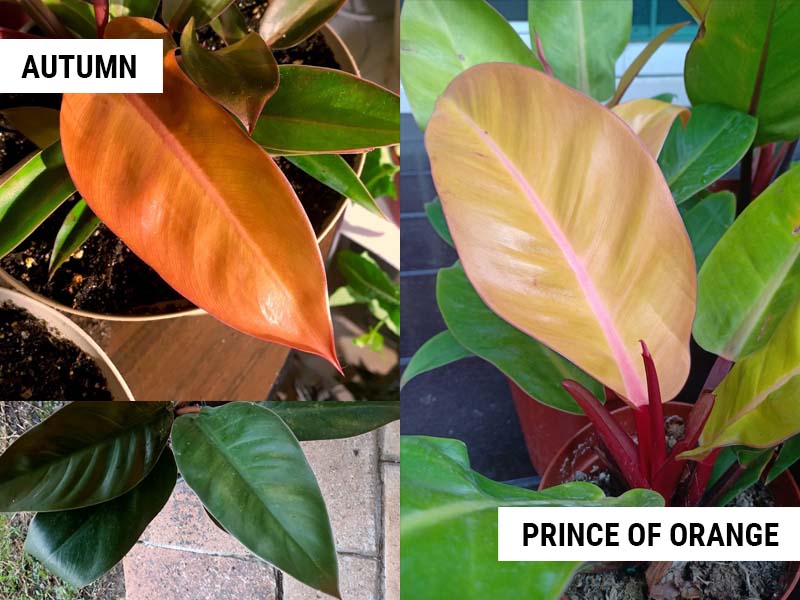 They have different colored leaves

The color varies throughout the life of the leaf, from unfolding to maturity.

The young leaves of Prince Of Orange are pastel orange in color, that is, they are not very bright, but warm and soft. At the same time, Autumn unfolds its leaves in a bronze-red color. This means that it is darker and brighter.

At the middle stage of maturity, the Prince Of Orange leaves are more intense orange but still lighter in color. While Autumn turns a fiery orange.

By full maturity, these varieties will also come in different colors. Autumn first turns red-burgundy and then dark green. Prince Of Orange turns light green after the orange color and stays that way for the rest of the time.

It follows that the Autumn leaves are brighter and slightly darker before maturation, after maturation, they become very dark, almost like Black Cardinal. Whereas Prince Of Orange has lighter colors on its leaves.

The shape of the leaves is the second significant difference between these varieties.

The leaf size of both philodendrons is about the same. The leaves are 15 inches long and 5 inches wide. But in Autumn the leaf starts to taper from the middle of its length and its tip is very sharp like a spear. Whereas the Prince Of Orange begins to taper almost at the end of its length. Its tip is also sharp, it is a more heart-shaped sharpness.

The different leaf shapes also make the shape of the shrub slightly different. Prince Of Orange has a more rounded (soft) crown shape. Autumn, on the other hand, has a sharper edge like the top of a pineapple.

I don’t know about you, but I like the more aggressive silhouette of Autumn.

The last more or less noticeable difference is the color of the petioles.

The Prince Of Orange petioles as well as the leaves do not have a very high color intensity. They are pale red. The only exceptions are the young petioles of the leaves that have not yet unfolded.

Autumn, on the other hand, has much more richly colored leaf petioles. When young, they are bright red. Closer to maturity, they turn dark red, and it is a real eye-catcher.

Although the color of the petioles cannot be called a significant advantage, it is nevertheless a victory here for the Autumn.

All the main differences I have already described above in as much detail as possible. Some minor differences may appear in the process of cultivation, but they are not worth emphasizing because of their insignificance.

Now let’s talk a little about the common features of these two wonderful philodendrons.

The first thing I want to highlight here is the growth habit. They are self-heading philodendrons. That means they do not have a long stem just like many other philodendrons.

In general, philodendrons grow on large trees and climb up little by little. But that can’t be said of today’s two. They are shaped like a large bush, something like a large-leafed hosta.

Both of these plants are up to three feet tall and about the same (or a little more) wide. As I mentioned, Autumn is sharper, while Prince of Orange is more round.

Toxicity is that unpleasant trait that unites not only Autumn and Prince Of Orange but also most other philodendrons. All parts of these plants contain toxic substances that can cause discomfort to humans or animals.

If parts of the plant get on the mucous membranes, it will cause burning and other unpleasant symptoms. If swallowed, toxins can cause vomiting. More serious symptoms are unlikely.

In case you have a pet, place philodendron out of reach. If poisoned, show the pet to a veterinarian immediately.

You need to provide warm conditions for philodendrons to thrive. A temperature of about 70-75 °F would be ideal. In cooler conditions as well as in hotter ones, the plants will stunt their growth. If the temperature is too low, the philodendron can suffer a lot.

The best humidity is 80% but it is not easy to achieve such conditions in the house, so you can also grow at 50% humidity. Low humidity in hot, dry weather can cause dry spots on the leaves. So if something like this happens to your plants you need to mist them at least once a day or install a humidifier.

The third important condition is a sufficient but not excessive amount of sunlight. Both philodendrons cannot tolerate direct sun because it will burn the leaves. But this does not mean that they will grow normally in full shade. They need indirect but the bright sun to get good leaf color.

Watering philodendrons is a very responsible but not very difficult activity. On average, you should do it once a week. In the heat of summer or during the growing season, you may need to water a little more often. In any case, it is better to check the soil humidity, and if it is almost completely dry, then you need to water the plants.

In winter, you should not water more often than once every 10 days. Philodendron will tell you about the lack of moisture by the soft (slightly flaccid) leaves. Do not panic, just water the plant, and everything will be fine.

Never over-water philodendrons because they can easily rot and you will lose them.

Soil is one of the most important elements in growing philodendrons. It must be loose and water permeable. Some owners of philodendrons grow them in bark, but in this case, they need more frequent watering and high air humidity.

You can find special soil for aroids on the market. Or you can make it yourself by taking half of the ordinary potting soil and mixing it with good, disease and pest-free compost. Succulent soil is also a good option.

Among philodendron pests, aphids are the most common. This insect is not often found indoors, but it can sometimes happen. Aphids can be detected by the sticky liquid on the leaves. To get rid of these bugs you need to spray the philodendron once or twice with horticultural oil.

Diseases also don’t bother philodendrons very often. Most likely, with improper cultivation, spots can appear on the leaves. In this case, you need to treat the plants with a fungicide. It’s also a good idea to get good air circulation around the plants and not to give them too much water.