Over time, all plants increase in size and spread in the surrounding environment. This feature can be used to produce new plants.

The best way to propagate a hosta is by splitting. When the crown of the hosta reaches at least 1 foot across, dig it up and divide it into two pieces. Then plant them separately in the soil and they will eventually become full-grown plants.

Read on to learn more about all the ways to propagate a hosta. Also, be sure to check out the article How to Grow the Most Stunning Hostas.

Propagating a hosta by dividing its rhizomes is the most popular method because of its simplicity. I have used this method many times and have a high success rate, but it is worth talking about the many subtleties.

First of all, you need to determine the most appropriate time to divide. In general, you can divide a hosta at almost any time during the growing season, but the success rate will vary.

The two most favorable periods are spring and fall. Spring, when young eyes (buds) emerge from the ground, is the best time to divide. More specifically, for zone 6, this would be mid-spring. If you live in a warmer climate, the optimal period will be earlier.

The next favorable time is late summer or the first half of fall, depending on the climate zone. The ground is warm enough at this time of year for young plants to root successfully before winter. 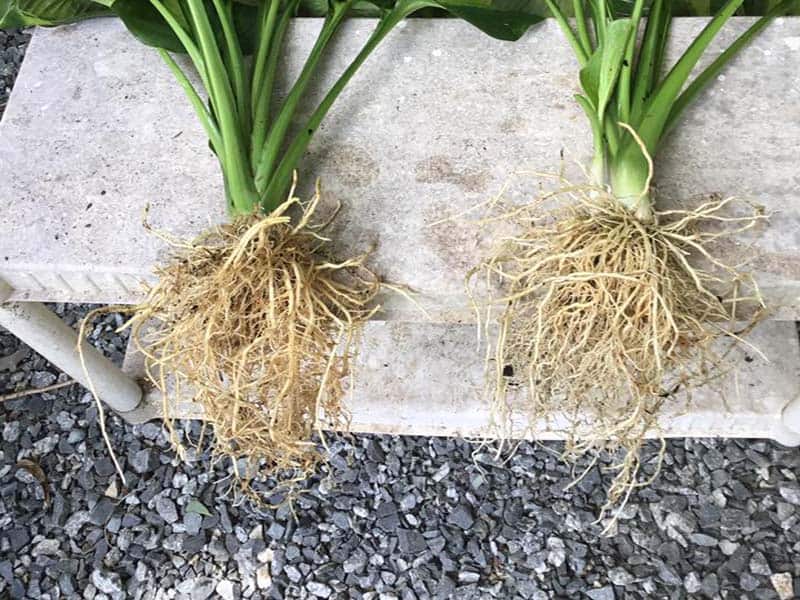 Next, let’s talk about dividing the rhizomes. Depending on the size and variety of hosta, the method will be different, and so will the tools. Before you begin dividing, dig up the plant and clean the roots from the soil.

If the rhizome is large, you can divide it into two or four parts. In this case, you will get new plants that will quickly take root in the new place. If you want to have many plants, you can divide the hosta into smaller pieces. Each piece should have roots and two to three buds.

You can use a shovel, axe, or saw when working with large shrubs. These tools are great for dissecting plants.

In the case of small rhizomes or compact varieties, you need to be delicate. Use a well-sharpened knife for cutting. Try to cut along the fibers. If the plant is small, do not divide it by more than half.

Next, spray the wounds with a fungicide solution or powder them with ash. After that, the plants can be planted in a new location.

Read more: How To Split Hostas?

One of the most interesting ways to propagate hostas is by sowing seeds. Many collectors around the world sow huge amounts of seeds every year, hoping to get new varieties of these beautiful plants.

The seeds should be sown in the spring, so place them in a dry place, away from pests. It is best to use a paper box, which will absorb moisture so that no fungus will form on the seeds. It is not necessary to keep the seeds in a warm room, the garage will be perfect for this.

Hosta seeds can live for quite a long time. They do not deteriorate when exposed to frost.

You can sow them the following spring. Many hybridizers claim that seeds are viable for 18 months.

The greenhouse is the best place to sow, but plastic trays with clear lids can also be used. The trays should have drainage holes. If there are no holes, make them. Excess water should flow out of the tray, not be trapped in it.

The size of the containers depends on the number of seeds. It is best to use a container at least 4 inches wide, 8 inches long, and 4 inches deep. Of course, this is not a strict requirement, but in larger containers, you will have to water the seedlings less often, which will make them easier to care for.

The next thing you need to take care of is the soil. It is best to use soil specifically designed for seeding. You should use only quality substrate from a reliable manufacturer. 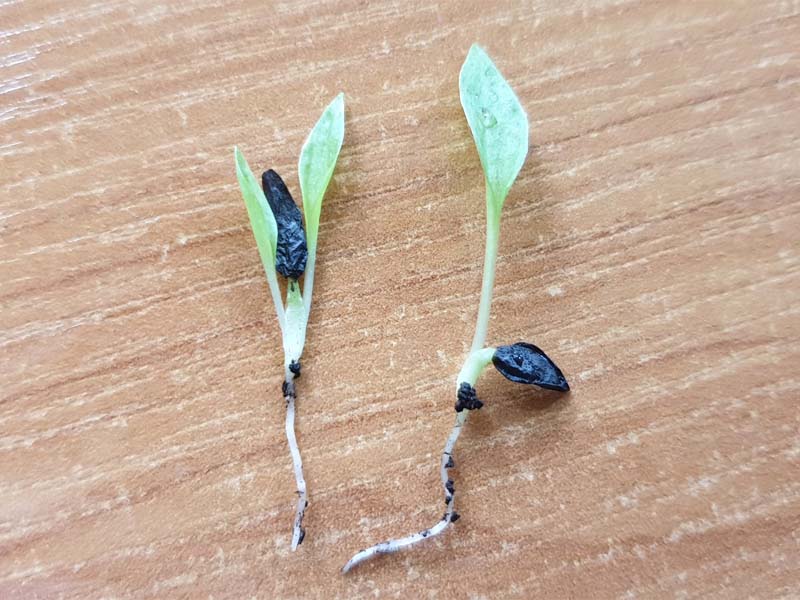 The packaging should also indicate that the soil is sterilized. If you do not follow these recommendations, the fungus can destroy your seedlings.

As I wrote above, you can cover the trays with clear plastic lids or put them in clear plastic bags to keep the humidity high. However, a greenhouse would be a more comfortable place.

After sowing, move the trays into the greenhouse. Cover the greenhouse with a shading net, use as dark a net as possible. Young hostas do not need much sun, and the mesh will keep the greenhouse from overheating.

The humidity in the greenhouse should be around 80%. This can be achieved by using a humidifier or by spraying the walls with water. In addition, the soil surface in the trays should be constantly moist, do not allow it to dry out.

Ventilate the greenhouse at least once every two days. If you have time, ventilate it daily.

A temperature of 68°F is necessary for the seeds to germinate well. If this value is lower, it will take longer for the seedlings to germinate. This temperature can be reached around the end of March in the spring in the greenhouse, but it depends on your climate zone.

If the humidity and temperature are favorable, new plants will emerge in 8-12 days. If they don’t, don’t worry, sometimes it can take longer. 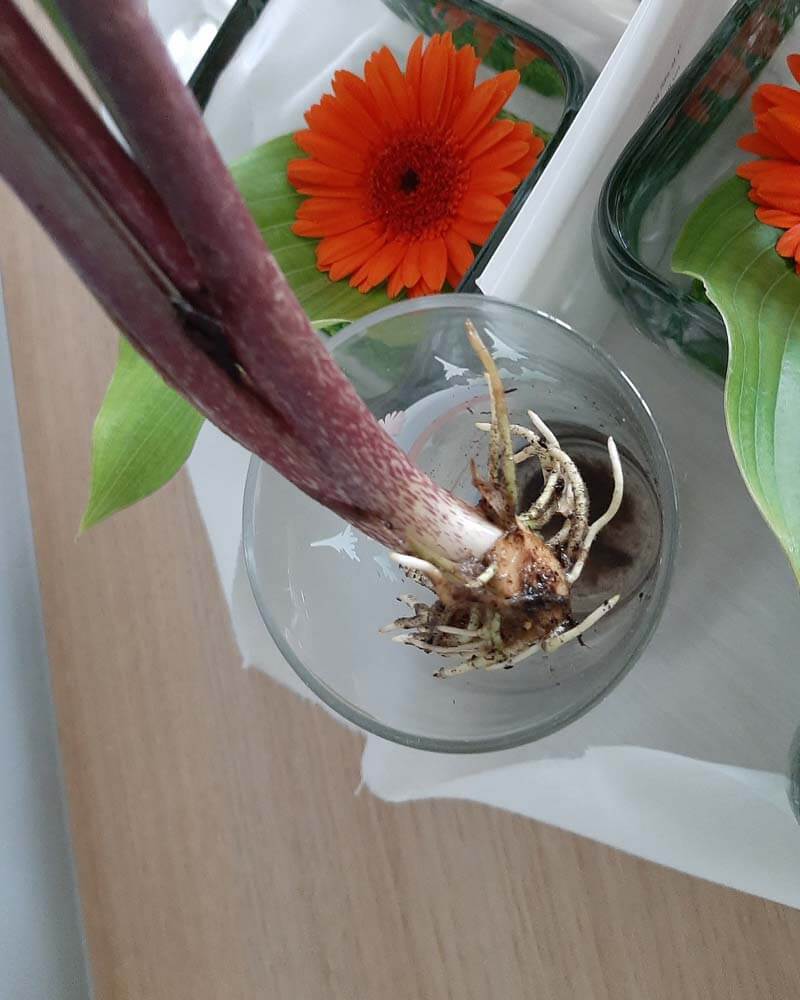 You can propagate a hosta with leaf petioles, but the success rate will be low compared to the previous methods.

The first thing to do is to tear off the leaf with the stem from the rhizome so that some white root tissue remains on it.

Next, you need to choose where to root the leaf. There are two ways. The first is in water; the second is in soil. Many argue that in water, the percentage of successful rooting of the hosta is higher. However, this method has the disadvantage that you will have to change the water quite often.

Rooting a hosta cuttings in soil requires less effort, but the risk of failure is higher.

After a few weeks, the cuttings will either root or die. If you are lucky and roots appear, plant the hosta in the ground and give it a little fertilizer. Also, don’t forget to water it more often.

The most exotic way to propagate a hosta is to propagate by tissue culture. Because of its complexity, it is not common in nurseries. However, it can give excellent results, so let’s talk about it briefly.

It all starts with cutting part of the plant into small pieces. Then the cut material is sterilized and placed in transparent containers with a special gel. This gel contains nutrients, vitamins, and growth hormones.

All work is done in a special sterile incubator that is free of fungal spores and other pathogenic bacteria. When a piece of the plant is placed in the gel, the container is covered with a lid and transferred to a special box where the necessary temperature and light are.

After a while, the cells begin to divide, and a new plant, an exact copy of the parent plant, is formed. After some time, the plant is transplanted into the soil.