Today we are going to look at those Japanese maples that are best suited to growing in full sun. In addition to their excellent tolerance to direct sun, they also have very high ornamental values. 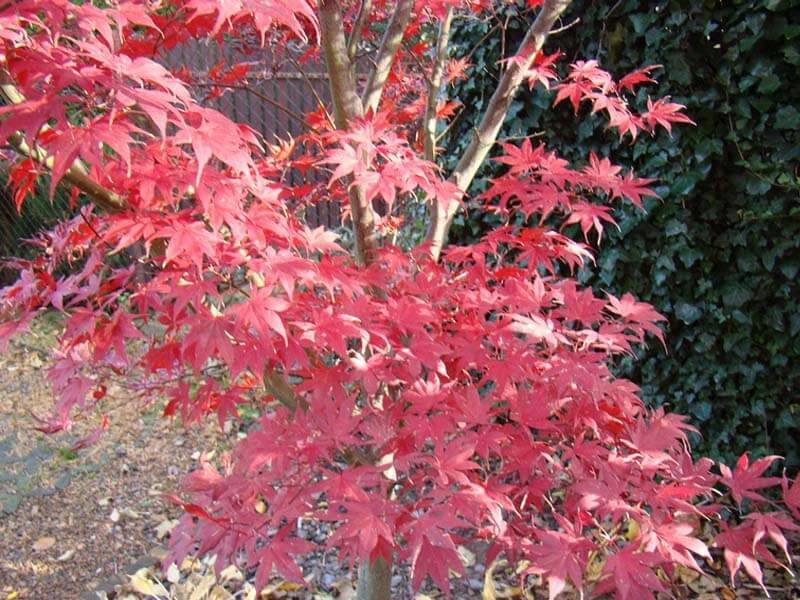 Bloodgood is one of the best Japanese maples for full sun. It can grow in zones 5-9 and does not need shading or shelter for the winter. Although in zone 9 some shade will be an advantage.

You also have to consider that it is a fairly large tree that can reach 25 feet in height. So you have to plant it at least 15 feet away from buildings or trees.

As for its appearance, Bloodgood has bright red leaves divided into 5-7 lobes. In the fall, the foliage turns orange-red. The crown shape is upright when young, but expands over time. 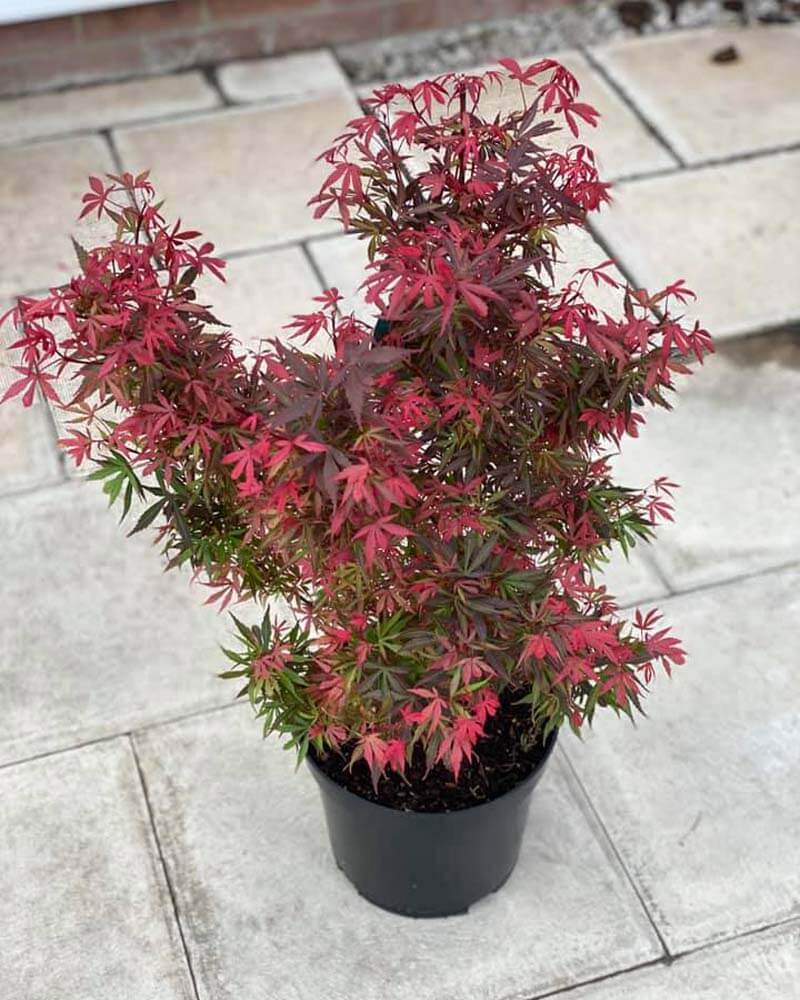 Shaina is one of the most compact Japanese maples for full sun. It is usually no more than 6 feet tall and 10 feet wide.

The crown is very dense and has a spherical shape. You should not expect a weeping effect from this maple, but it is nevertheless a very beautiful variety.

Shaina has very beautiful leaves divided into several lobes. The color is very intense and varies from red to purple.

You can grow this in zones 5-8 in full sun. But remember in the south you must mulch the root zone to prevent the roots from overheating. 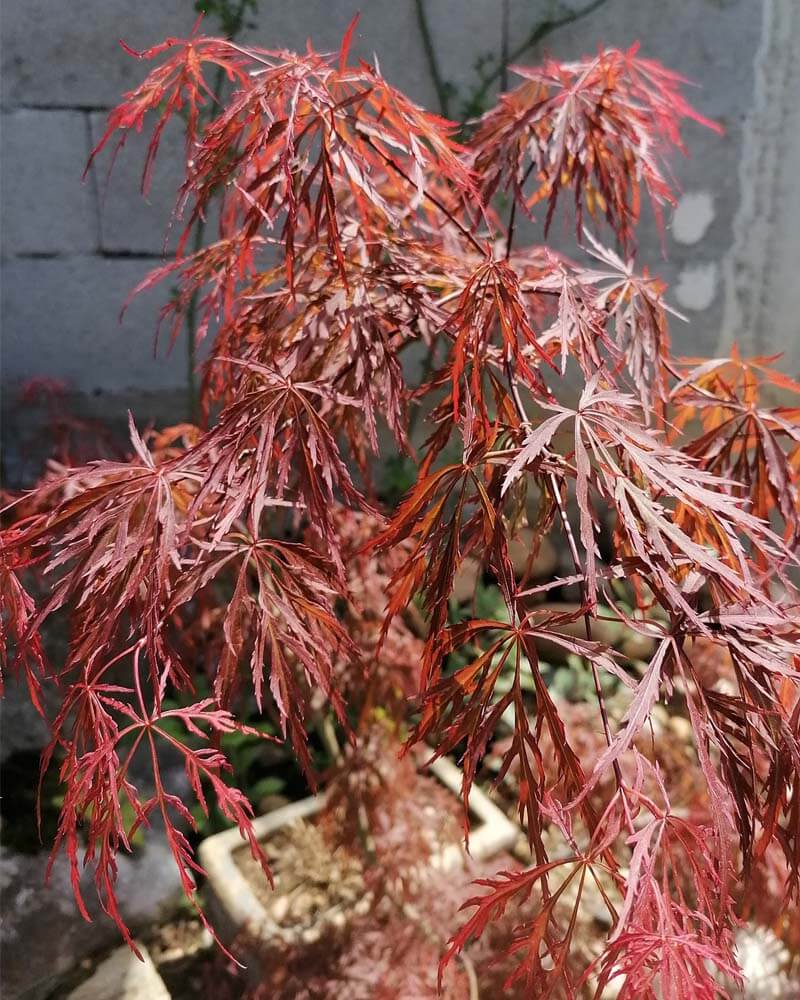 Orangeola is also a full sun maple, although it can just as well tolerate partial shade. It can be grown throughout most of the U.S., particularly in zones 5-8.

It is a very compact and beautiful maple. It will reach a height of 4 feet and a width of 3 feet in the first 10 years. The growth habit is more like a large bush than a tree.

The tree also has some weeping, which makes it even more valuable in the eyes of Japanese maple lovers.

As for the leaves, in Orangeola they are deeply dissected into several parts which also have dissections. The color can vary from red to orange depending on the season and growing conditions. 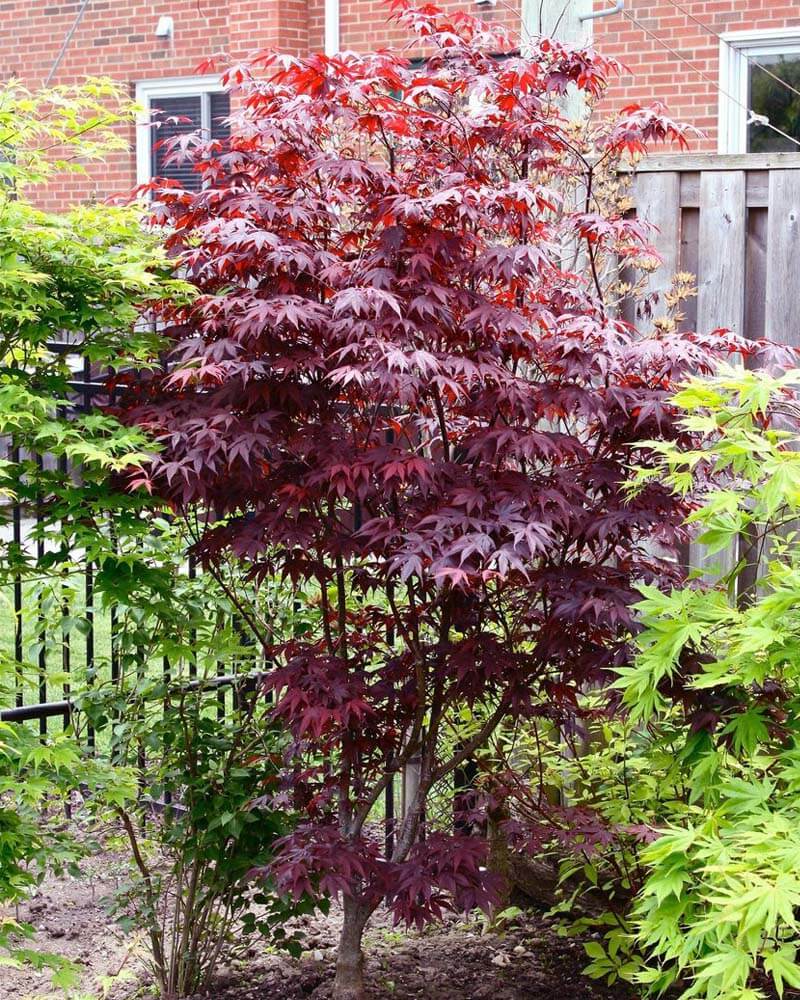 Emperor I is the kind of maple that has excellent hardiness in place with excellent tolerance to direct sun. You can grow it in full sun, even in zone 8. The main thing is to provide it with enough water.

This is also the maple with the best leaf color compared to other maple varieties. Emperor I leaves are deeply dissected and have a red-purple color that is not lost in summer. It is only in autumn that the leaves turn bright red before they fall off.

The size of this tree is medium. It reaches 15 feet in height and a little less in width. The growth habit is upright with many side branches. Provide plenty of space and nutritious, well-drained soil for good growth. 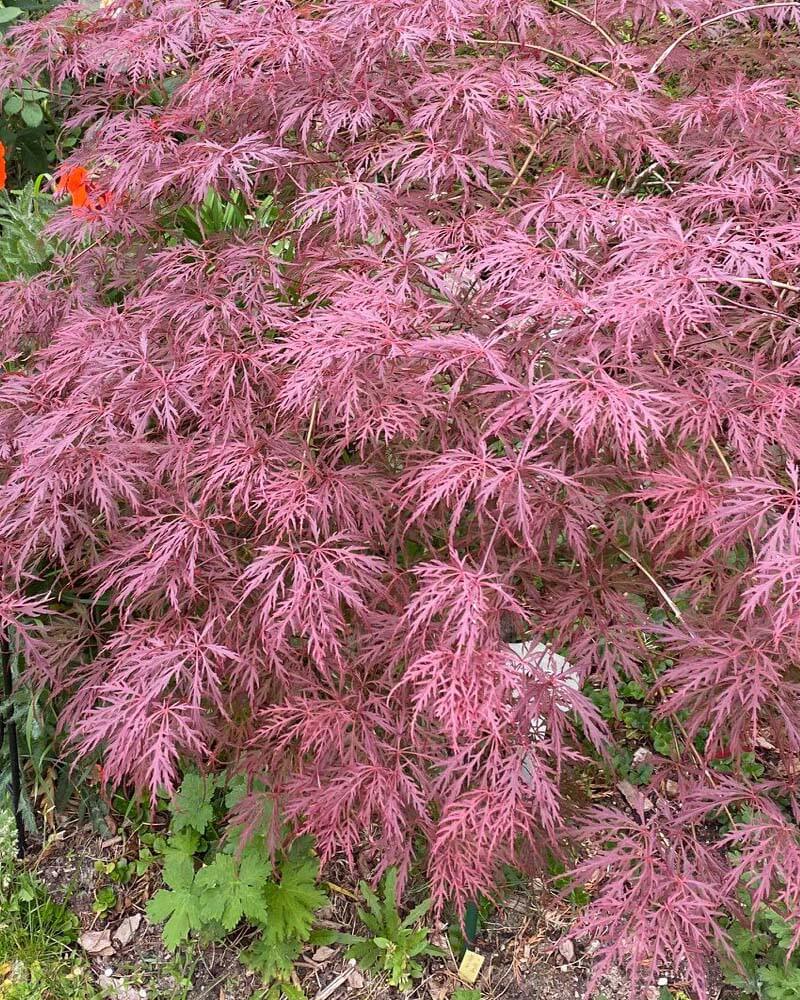 Garnet is a wonderful dwarf maple that you can successfully grow both in full sun and partial shade from zones 5 and 8. It has an excellent low-temperature tolerance and does not need to be sheltered.

The size of this maple allows it to be grown in a small garden or even in a container. It reaches up to 6 feet tall while 8 feet wide. The result is a mushroom-shaped maple with weeping branches.

The leaves are very decorative because of the deep and wide dissections. The lobes have serrations which makes the leaves even more aggressive and unique.

The foliage color is red but can have shades of purple to scarlet. It depends on growing conditions and the number of sunlight hours. 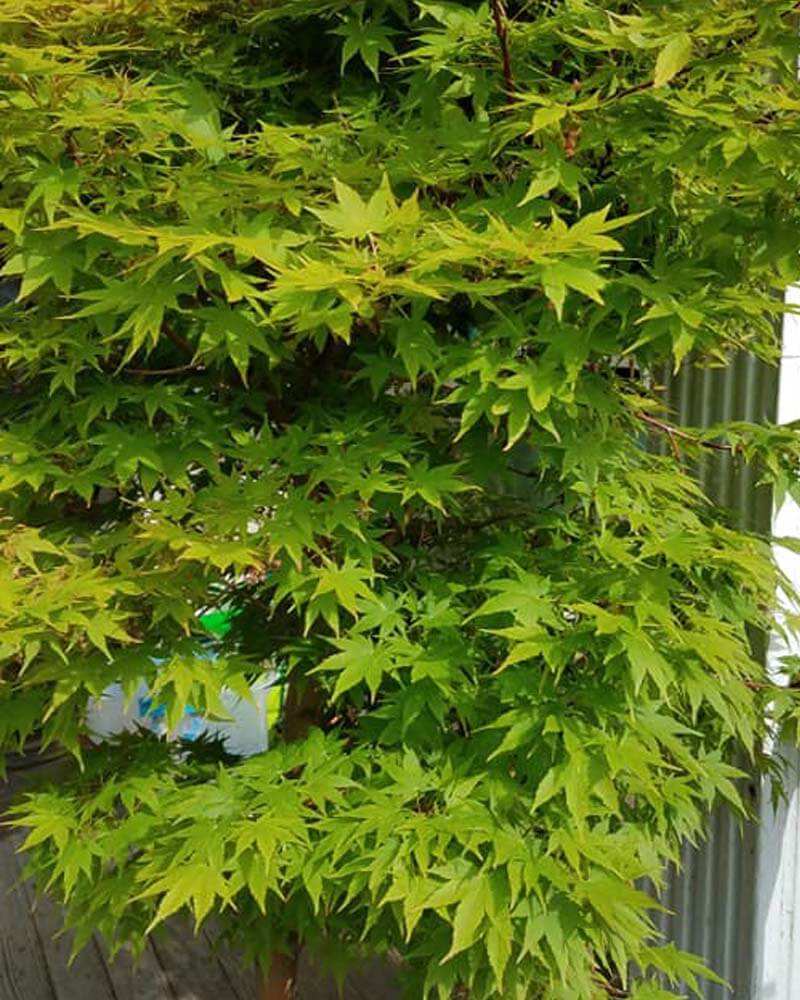 Sango Kaku is one of the best green-leaved Japanese maples for full sun. It can be cultivated in 5 to 8 zones without worrying about how the sun will affect it.

Moreover, it is a large enough maple that hiding it from direct sun is unlikely. It reaches 25 feet in height, which is something to consider when planting. Do not plant it closer than 15 to 20 feet to the house.

It can be up to 20 feet wide, so it’s a pretty upright tree. Although you can get a nice canopy under it if you want to.

The strength of this variety is its bright green leaves divided into five lobes. The leaves look very vigorous, especially in spring.

Another decorative feature of Sango Kaku is the red bark. It contrasts very nicely with the green foliage. But it looks especially interesting in late fall and winter. 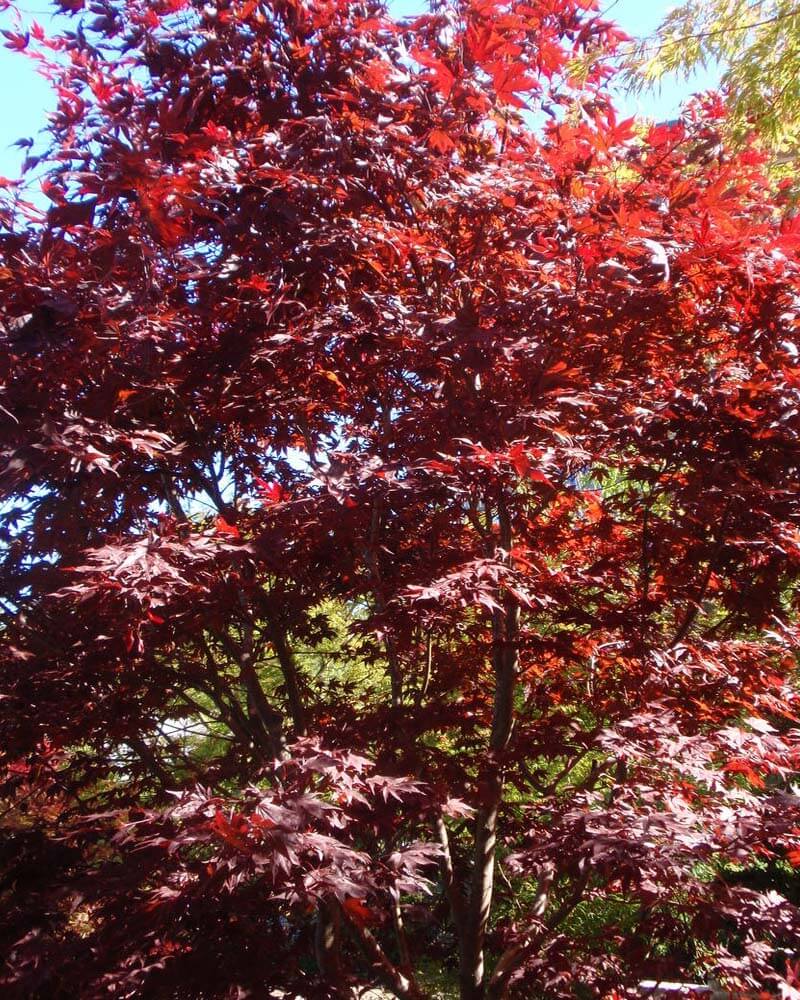 Fireglow can tolerate full sun even in zone 9. Usually, in this climate, it is quite hot so you need to make sure you mulch the bedding circle. Also, be sure to control the moisture content of the soil and do not let this maple get thirsty, especially in the hot months.

Another advantage of this variety is its small size. It reaches about 10 feet in height and the same width. That means you’ll have a nice tree that will fit in a small area pretty quickly.

The leaves are red in early spring. By midsummer, the foliage turns reddish-burgundy and then turns fiery red again in the fall. The leaf plate is divided into 5-6 lobes and looks very beautiful. 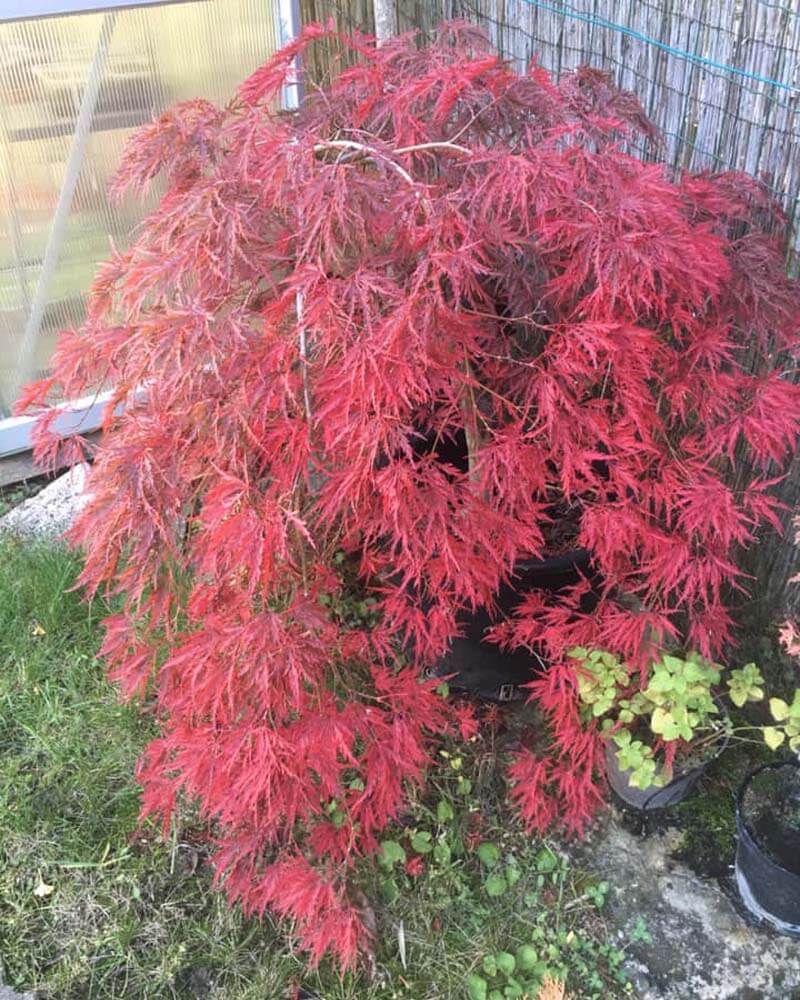 Inaba Shidare is a unique Japanese maple that can be grown in full sun in zones 5-9. Its special value is that it has a very interesting growth habit.

First, it usually reaches no more than 6-8 feet in height while it can reach 10-15 feet wide. The result is a very wide and low crown. The branches also sag very much downward, which gives it a wonderful weeping effect.

A second advantage is the very deeply dissected leaves. This creates a unique pattern when looking at the tree from a short distance.

In addition, the color of the leaves is very intense red-purple. Depending on the time of year, the shade may change slightly, but in general, the color holds up very well. 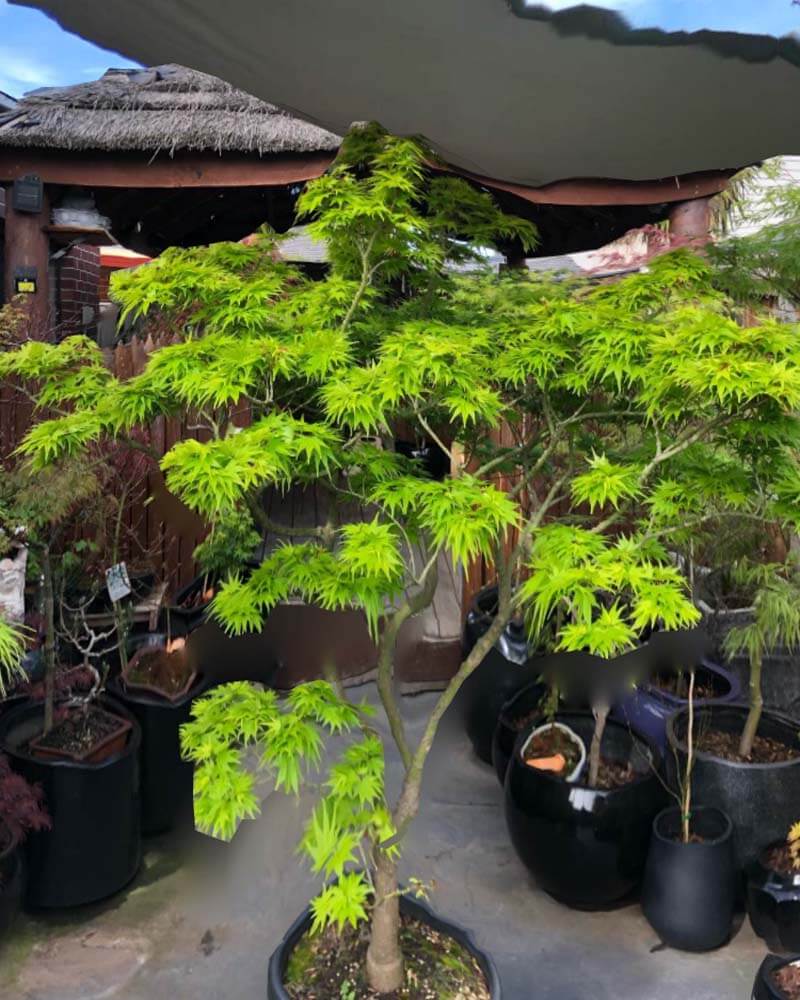 Mikawa Yatsubusa is a rare Japanese maple that is ideal for sunny locations. Many collectors consider it an honor to have this variety in their garden.

One of the most interesting features is that Mikawa Yatsubusa has a lot of leaves on the branch. The tree has more leaves on its branches than other maples, which makes it look much denser.

The second advantage is the very bright green foliage, which looks very vibrant. The leaves are split into 5 or more lobes which is very reminiscent of another popular plant.

The growth rate of this maple is very slow. By 10 years of age, it usually reaches no more than 4 feet in height and width. This feature allows it to be grown in a container or in a small area of the garden. 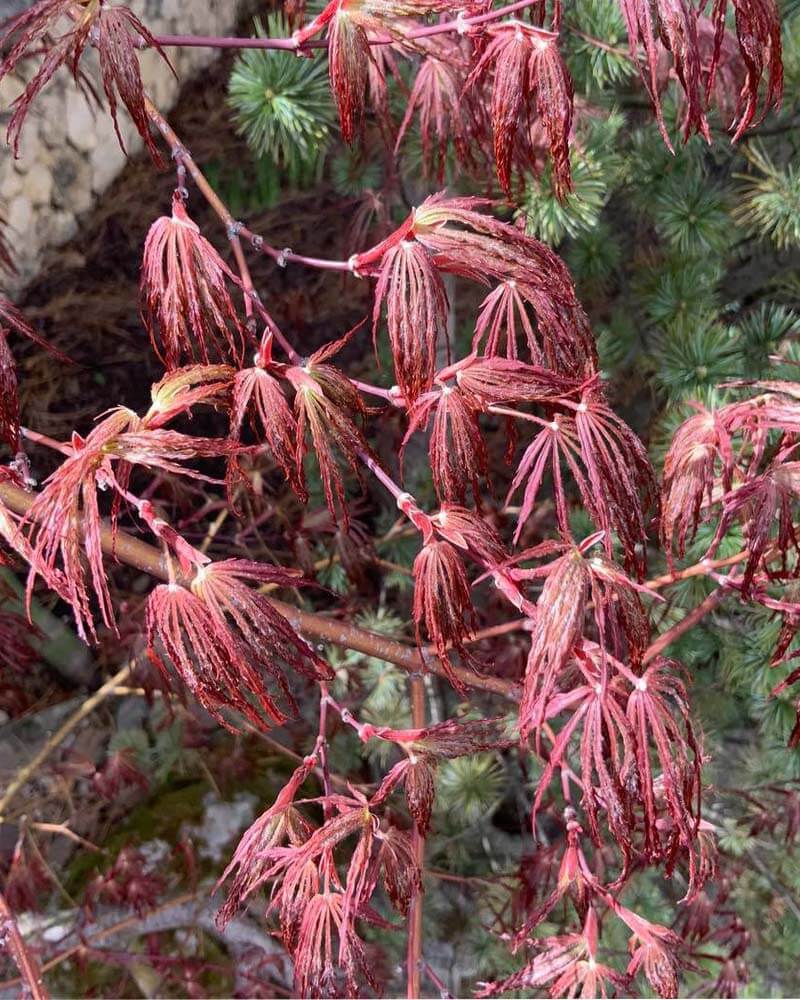 Crimson Queen has a medium size. It can exceed 15 feet in height and width. It is ideal for growing in full sun in almost all of the United States.

Among the advantages of this variety is its growth habit, which is mushroom-shaped. In addition, the branches point downward making a great weeping effect.

This Japanese maple also has an excellent red leaf color. Usually, under the right growing conditions, the red has a strong shade of purple. At the end of the season, the leaves turn scarlet.

The foliage is very heavily cut into thin lobes. The lobes also have shallow cuts. All this provides a pattern of unique beauty. 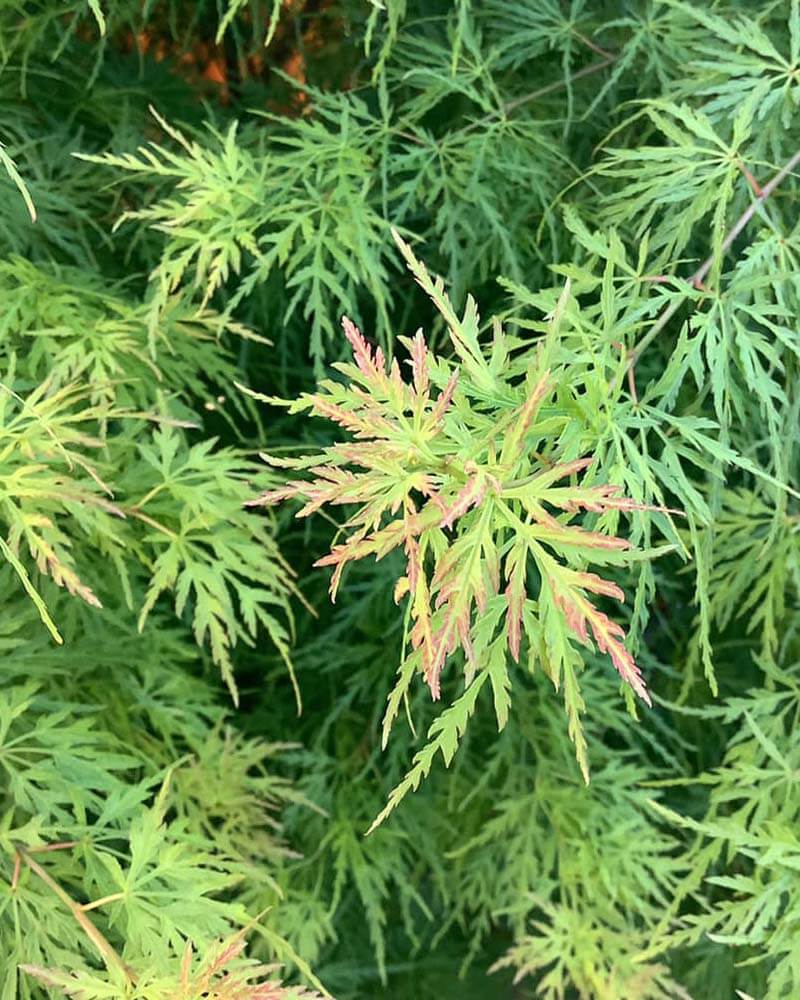 Seiryu has beautiful green leaves that can be slightly yellowish. But in the fall, the leaves turn yellow, which also gives it an interesting appearance. It grows great in full sun in most states.

In addition to color, the leaves have a unique pattern. The leaf blade is divided into 5 conical lobes. The lobes have small incisions, which makes them more patterned, and often the edge is highlighted by a different shade of green.

This maple reaches a height of 15 feet and a height of 12. That means it can’t be called dwarf, but it’s also relatively compact. Choosing this tree will give you a great look in the garden with minimal care. Read more: How do you keep a Japanese maple tree healthy? 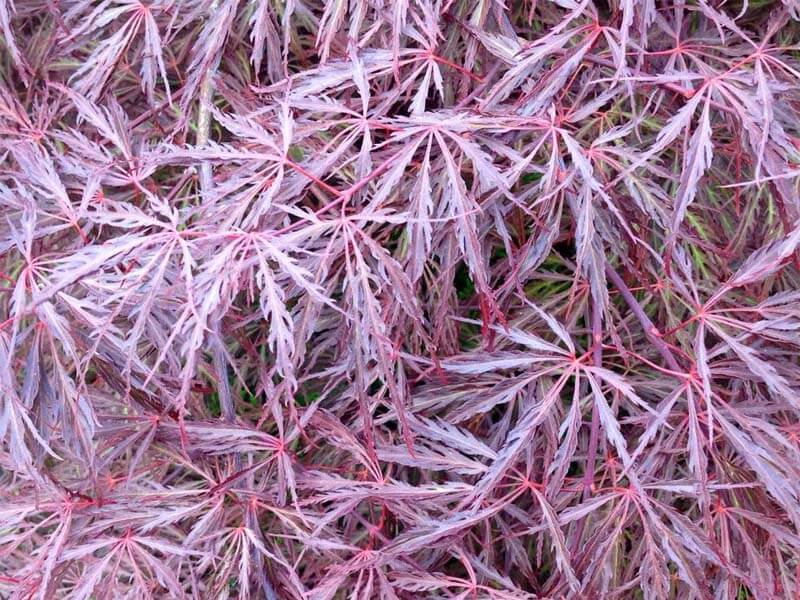 Tamukeyama is one of the oldest varieties of Japanese maple. According to some reports, it has been cultivated for about three hundred years.

But that is not its only advantage. The first thing to stand out is its shape. Usually, at maturity, the Tamukeyama reaches 5 feet in height, while it can exceed 10 feet in width.

This gives us a very beautiful dwarf tree with a wide crown. In addition, its branches sag heavily resulting in an amazing cascade of weeping branches.

Leaves are another strong point of this variety. They are split into very thin lobes of red-purple. The color holds up very well, which is a distinctive feature among Japanese maples. 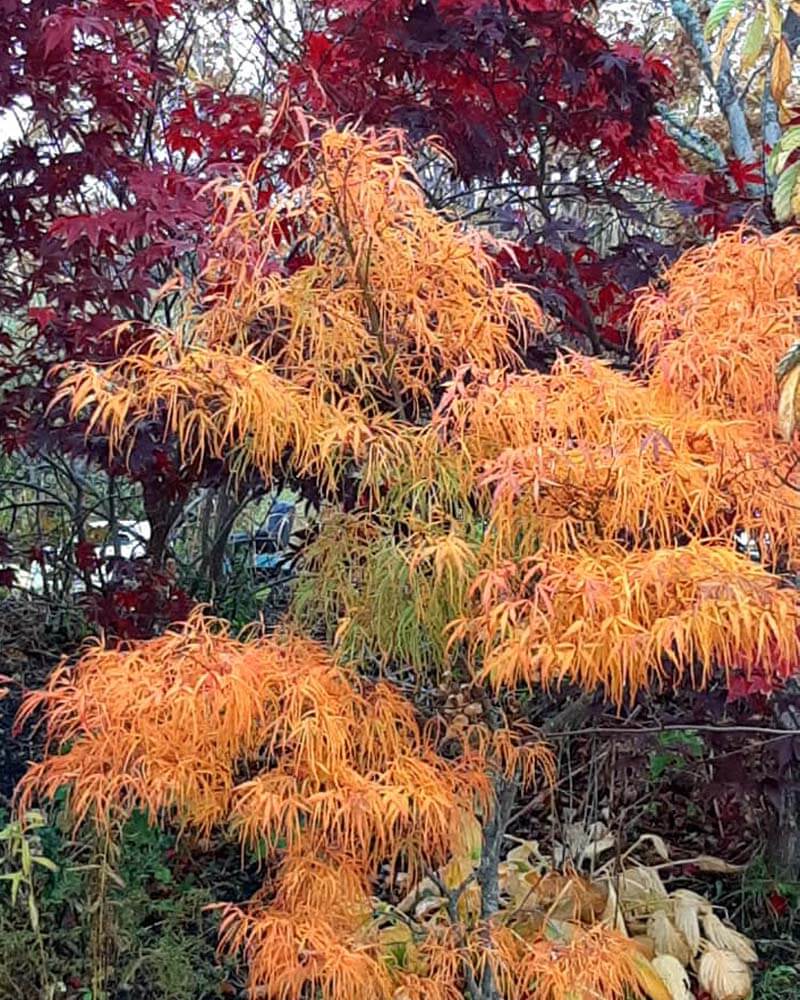 The very name of this maple speaks for itself. If you choose it, you will get a beautiful waterfall of beautiful leaves. This maple can easily grow in full sun and not get burnt.

The leaves of this maple are deeply dissected with very long lobes. The lobes can sometimes even sag, but don’t worry about this as it is perfectly normal for this variety.

The Waterfall is very compact in size. It is no more than 5 feet tall while it can be as much as 10 feet wide. When this maple reaches maturity it is a delightful sight of a weeping maple.

But if you want you can get a wide and low canopy like a mushroom. To do this, trim back the young branches that hang down regularly.

From spring to fall the leaves are green and only the shade changes. But in the fall the real beauty begins, the maple turns into a fiery orange ball and attracts all the attention.

Mai Kujaku belongs to a different species of maple than the previous ones, but nevertheless, it is very beautiful and can grow in full sun.

This maple has uniquely shaped leaves, which is its undoubted advantage. The color is bright green in early spring but becomes dark green in mid-summer. In autumn, the maple turns a red-orange color and looks marvelous.

As for size, Mai Kujaku can reach 15 feet in height. It has a vertical growth habit that can be used as a vertical accent in the garden.

Another feature is the large red flowers that contrast greatly with the green foliage. This is a definite advantage of this variety.