Pruning is designed to shape the tree, thin out the crown, and give more vigorous growth. To get good results, you need to know a lot of tricks.

These are short pruning tips and you will learn more about them below. By the way, I recommend you to read the excellent article How to successfully grow Japanese Maple for the beginner. 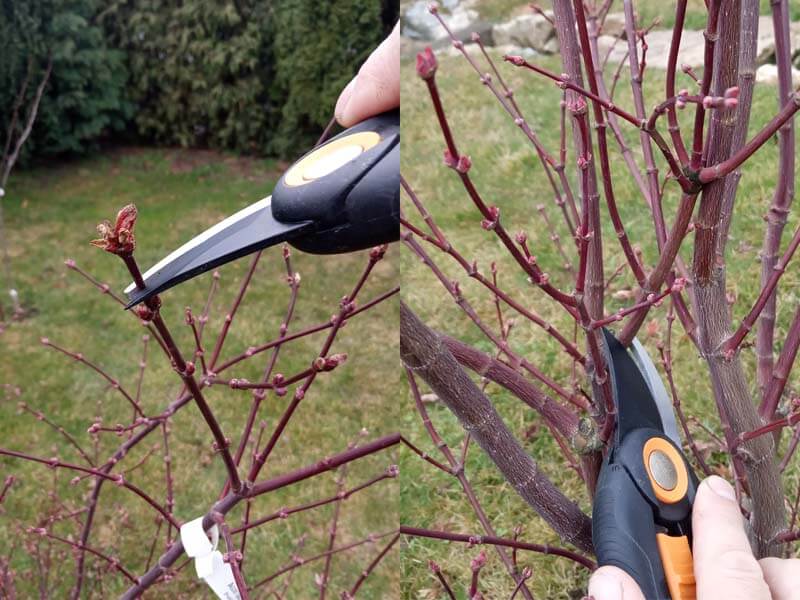 The best time to prune Japanese Maple is early spring. It is important that the maple comes out of dormancy and the buds begin to push but the leaves have not yet begun to emerge.

Early spring is best for most types of pruning. At the same time, dead branches can be trimmed at any time of year.

You can also trim your Japanese Maple any time of the year but the result will not be as good as in the spring. For example, if you trim in summer, you will slow down the growth of the maple considerably.

If you trim in the fall or winter, the wounds will remain open until spring. During this time, they will dry out and take a lot longer to heal.

Structural pruning is one of the most difficult and responsible. You have to know exactly which branch to cut to avoid large gaps in the crown.

Most often large branches need to be removed when they make it difficult to move around the yard. Over time, there are so many leaves on the side branch and it will sag, blocking the pathway.

Prune off the large branches with a saw.

Remove such a branch as close to the trunk as possible. Use a hand saw to do this. First, make a shallow cut at the bottom and then cut the branch from top to bottom.

Avoid damaging the trunk of the Japanese Maple. The cut should be as close to the trunk as possible but at the same time keep the wound as small as possible.

On upright maples, avoid removing structural branches that grow upwards. This is because it leads to large gaps in the crown. Except when the branches are heavily intertwined and the crown is very dense.

Very often branches of the second or third order grow into the inside of the crown, crossing other branches that are growing in the right direction. As a result, one branch starts to shade the other and the crown becomes too dense.

In addition, the appearance of the tree becomes less aesthetic. Not to mention the fact that a dense crown causes most leaf diseases. 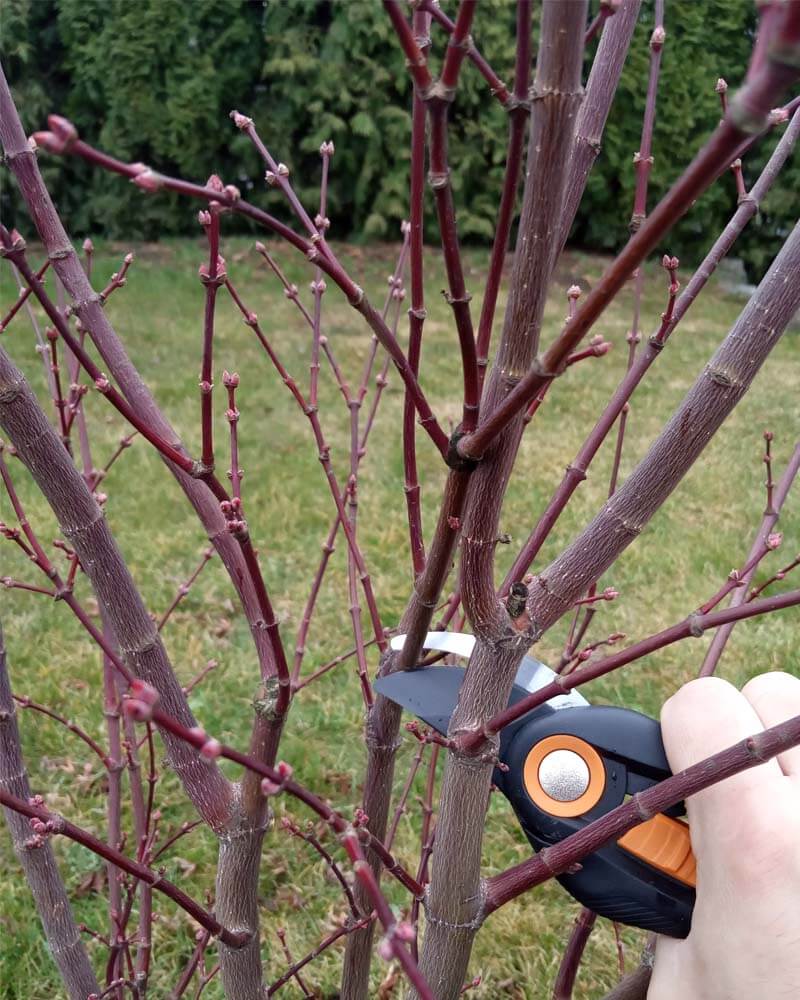 Cut back the crossing branches.

Look at the direction of the branches and highlight those that are growing inward, suppressing the other branches. Cut back the highlighted branches as close as possible to where they are attached to the main branch.

Bypass pruning shears are best for this type of pruning. But sometimes the crossing branches can be too thick, in which case use loppers.

The top of a Japanese Maple is trimmed in two cases. But it almost always applies to upright growing varieties.

The first is when you want to reduce the height of the tree and get a more branched structure. Cut the central shoot at the height you want, but leave at least two buds on it. Make the cut just above the node of buds.

If there are several upright stems, trim them to about the same height and leave 2 or more buds on each one. If you cut too low and no buds are left, it will eventually die. 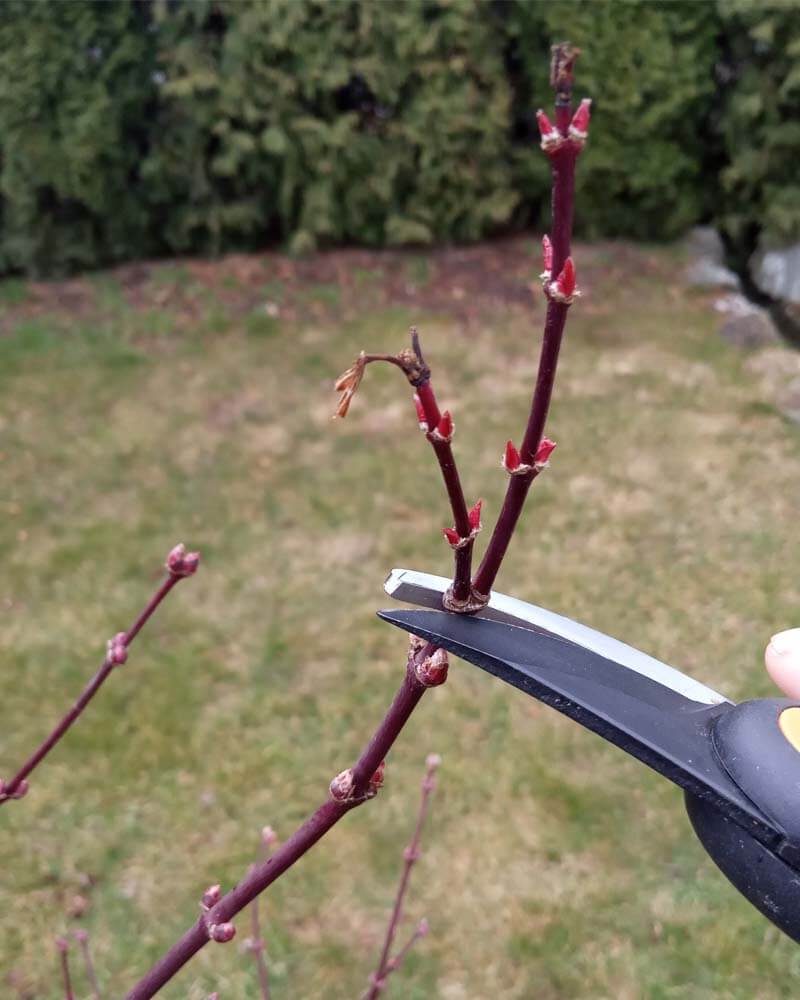 The second case of top removal is when you want to form a single central trunk and a more conical crown shape. This should be done as early as possible to make the trunk more even.

To do this, from 2-3 years of age shorten or completely remove the vertical shoots except for the central one. This will result in a less branched but more upright crown.

Removing deadwood is the most frequent and mandatory type of pruning. As the tree grows, it constantly loses some of the branches that need to be trimmed.

One of the most common causes of die-off is damage to young branches by late frosts. Such branches must always be removed to make room for new branches.

It is also common for the lower branches to be severely shaded, so they will die off. These must be cut off because they can develop fungal diseases that will spread to the living parts of the tree.

Cut off the dead branch as close to the living branch as possible. This can be done at any time of the year. Use a saw, pruning shears, or loppers to do this.

When a maple reaches more than 3 to 4 feet in height, twiggy growth often appears on its trunk and branches that are more than 1 inch thick.

These small twigs do not do the tree any good. They are usually at the bottom or inside of the crown and are shaded, so they take minimal role in photosynthesis. As a result, they consume more energy than they give to the tree.

They also spoil the appearance of the tree. The trunk and large branches become less visible and the tree looks like a large bush. But large skeletal branches are known to be one of the decorative features of Japanese maples.

You definitely need to cut off the twiggy growth. Do it very carefully with pruning shears. Cut them as close to the trunk as possible without damaging it.

The first thing you need to do is sharpen your trimming tools. They need to be sharp so that the cuts are as neat as possible.

Next, you need to sharpen the tools with alcohol. This is to avoid infecting the tree with various diseases. Disinfect your tools every time you move on to a new plant.

You can also get very good results by spraying the wounds with a multi-purpose fungicide or a copper fungicide. This will greatly reduce the risk of pathogens getting under the maple bark.