When it comes to Japanese maples, the sharply divided leaves and the red color come to mind. So it is with today’s two maples Fireglow and Bloodgood.

Bloodgood is an older variety that originated in the United States (New York). His father is Acer palmatum Atropurpureum. This variety got its name from the last name of its originator, which accurately described this maple’s appearance.

Due to its widespread use, Bloodgood has become so common that many gardeners are looking for something more unusual.

Another disadvantage of this variety is that many nurseries sell Atropurpureum Japanese Maple under the name Bloodgood, which causes confusion and misconceptions about this maple.

On the other hand, Fireglow came to the United States from Europe. Originated in Fratelli Gilardelli Nursery (Milan, Italy). However, it gained widespread popularity thanks to Holland nurseries, which named it Fireglow in the late ’70s. 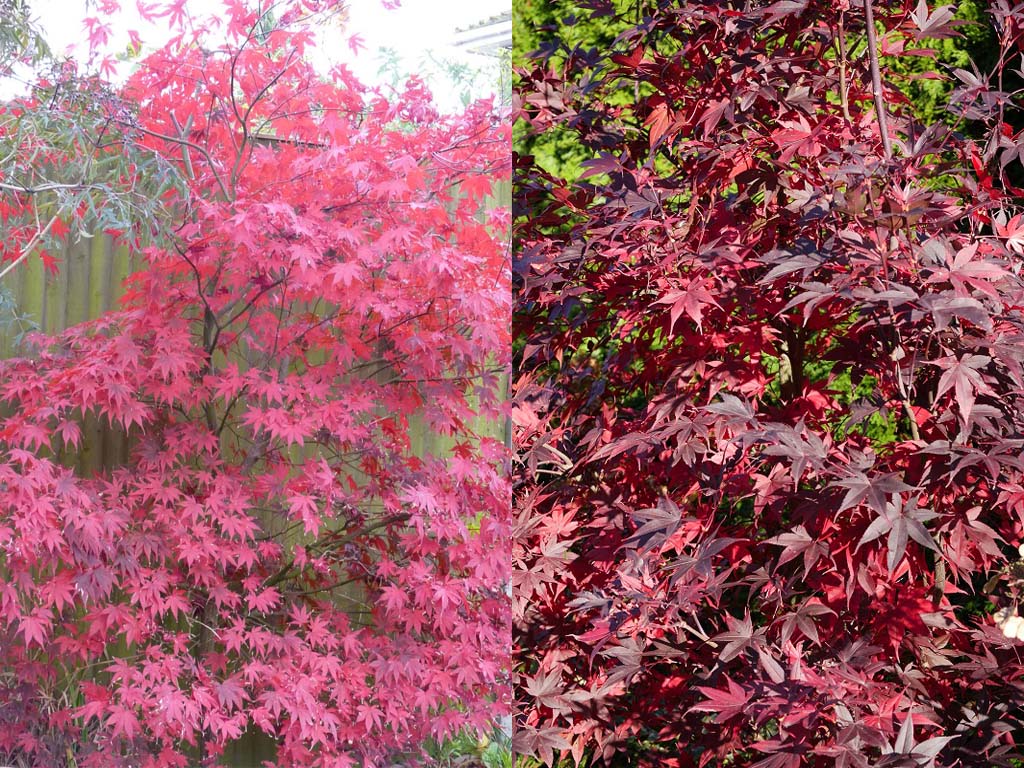 When the leaves begin to appear on Bloodgood, they have a rich dark red-burgundy color. Once the leaves open, it becomes a little lighter but still burgundy. The color remains the same throughout the summer until autumn.

Fireglow has much lighter leaves. Its color can be described as scarlet, sometimes lighter and sometimes darker. In general, this variety has red leaves and Bloodgood red-burgundy or even reddish-purple.

The advantage of Fireglow leaves is that it is slightly shiny and partially transparent. This has a significant effect, especially in the sun.

In addition, the back of the Fireglow leaves is orange and also slightly shiny. All this gives additional interest to this variety.

Both of these varieties hold their color well and do not burn in full sun. However, the color will not always be bright. In the shade, they will not be so saturated, and their color may even be reddish-green.

Only enough sun will make these maples unique. So be sure to give them at least 6 hours of direct sunlight per day.

Fireglow is smaller compared to Bloodgood. Its size after ten years is 8-10 feet in height and width. So it is a compact maple that grows 0.5-1 feet per year.

The growth rate and final size may vary depending on the climate and the amount of fertilizer, water, and sun that this maple receives. Sometimes it can reach 12 feet in height.

On the other hand, Bloodgood is more significant than its competitor. After ten years of cultivation, its size is 15-20 feet, with a width approximately the same or slightly larger—annual growth of more than one foot.

I must also warn you that in a warm climate and under favorable conditions, this maple in many years can reach 30 feet or more in height. At the same time, its width can reach 40 feet or more.

So what can be said for sure is that Bloodgood is not suitable for a small yard, as a 20-foot-wide tree also requires extra space around it. This extra space is needed to get enough sun and for good air circulation.

Of course, you can control the size of your maple by pruning. Here the main thing is not to prune more than 30% of the branches per year and always treat wounds after shortening.

On the other hand, if you do not have enough space or love small plants, you can choose Fireglow and do nothing while enjoying its beauty.

Their shape is slightly different

When you plant any of these maples, they will grow vertically in the first years, and only after a while will begin to expand. This is due to the fact that initially, the maple grows in height and when it reaches its maximum height then begins to grow in width.

Depending on how tall the Fireglow was before you bought it, it will take about 5 to 10 years before reaching its maximum height (8-10 feet). After that, it will grow more in width than in height.

Bloodgood’s maximum height can be 20 feet or higher, so it will take more than 20 years to reach this mark. And only then will it begin to grow in width.

As a result, in the first 20 years, these two maples will have different shapes. Fireglow can quickly become a complete lush tree. While Bloodgood will have an elongated shape for a long time because to reach a maximum height and form a wide canopy, it will take much longer.

The last noticeable difference between Fireglow and Bloodgood is the shape of the leaves.

Bloodgood has deep-cut leaves that look very distinct from a distance. This gives the maple a certain charisma.

Both of these maples have 6-7-lobed leaves. However, Fireglow does not have such deep cuts that make its leaves flatter.

In general, Bloodgood has more decorative foliage, and this is its advantage over the competitor.