Today we’re going to talk about probably the most common problem associated with growing hydrangeas, and that is changing the color of the leaves. Leaves are a good indicator of plant health and if you know how to recognize a problem based on how the leaf looks, you can solve it.

Lack of water in the soil, burning sun, overfeeding, or disease are the main causes of hydrangea leaves turning brown. To fix brown leaves, water hydrangea when the top 2 inches of soil are dry and provide the plant with dappled sun. Also, avoid fertilizing hydrangea more than 2 to 3 times a year. Keep the garden free of plant debris and make sure there is good air circulation around hydrangea to avoid the leaves turning brown.

Lack of moisture can cause hydrangea leaves to turn brown 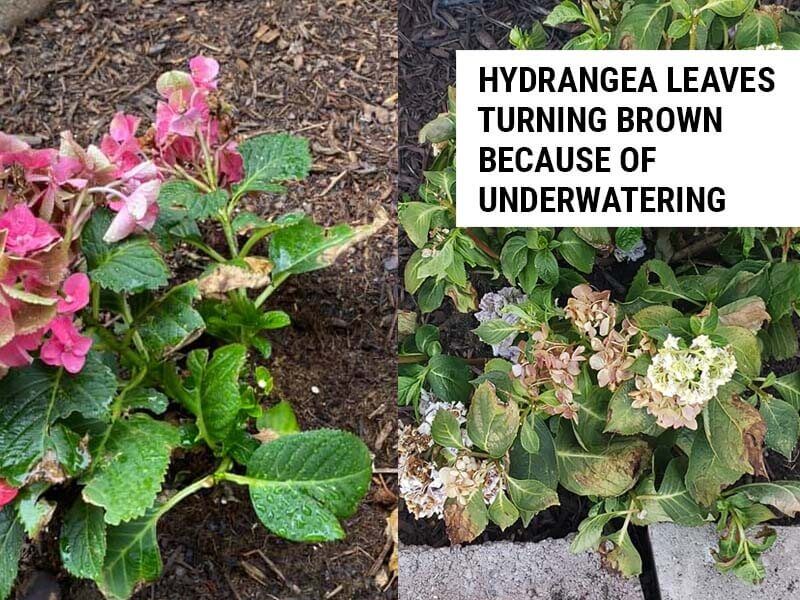 Everyone needs water, and hydrangeas are no exception. Moreover, these plants are very water-loving and a brief drought will leave a mark on the leaves. If the weather has not been too sunny, the leaves may just wilt, but if the sun has been strong, it will quickly dry out the leaves and they will turn brown.

You will get the same result if there is a dry and hot wind. The plant will not be able to supply the leaves with water and they will suffer.

Most of the time this happens in the heat of the summer. But sometimes it can also happen in spring if the hydrangea is growing in a pot. In windy and warm weather the substrate in the container tends to dry out very quickly.

It is best to water in the evening or morning as watering in the heat can be detrimental. Also, try not to water over the leaves, but directly on the ground. The amount of water should be considerable, 1 to 3 gallons depending on the size of the hydrangea.

Damaged leaves are likely to fall off but the plant will stay alive. If you follow my watering recommendations, the hydrangea will recover soon. But it may not bloom this year.

Excessive sun very often makes hydrangeas suffer. This is especially true of Mophead hydrangeas, as they are much more sensitive to sunlight. If you grow them in full sun, they can easily get burnt in the summertime and their leaves will turn a dark brown color.

The brown spots can appear in the middle of the leaf or the leaf can get crispy from the edge. Flowers can also sometimes burn and turn brown as well.

Hydrangeas planted in pots suffer the most from the strong sun. This is because the pot dries out very quickly in the sun and the leaves can burn in a matter of hours and even turn black.

Hydrangea paniculata can withstand almost a full day of direct sunlight. So if you don’t have a shady spot, choose this plant. All other hydrangea species need partial shade.

Ideally, have the sunshine on your hydrangea for 4 to 6 hours in the morning and light shade the rest of the day. 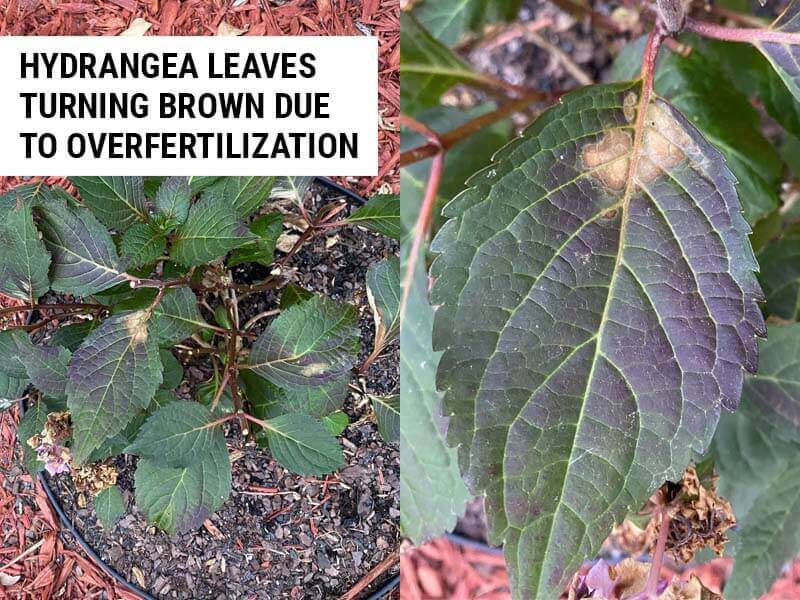 The next thing you need to be aware of is over-fertilizing hydrangeas. Very often in the pursuit of large inflorescences, many gardeners apply too much of various fertilizers. The first thing that will happen is that the plant will grow heavily and become weak.

But if the concentration of micronutrients is very high, the leaves will burn off from the edges. This burn is a bit like a sunburn – a dry light brown edge. On top of that, the leaves will get big brownish maroon spots.

If you have fertilized more than once a month, the color change may be caused by the fertilizer. In this case, you need to water the hydrangea liberally, whether it is in a pot or the ground. This will flush out the salts that have accumulated in the soil through over-fertilization. Do this again no sooner than the top layer of soil dries out a little.

In the future, fertilize hydrangeas no more than twice a season. But do this with a slow-release fertilizer designed specifically for hydrangeas. This way, you will avoid over-fertilization because the trace elements will gradually get into the soil.

The first application should be made in early spring before the buds open. The second time is in summer after flowering, so that the hydrangea has enough energy to overwinter and flower abundantly next year. Avoid fertilizing in late autumn and winter.

Insects are a very serious threat to most plants. There are almost no ornamental plants that are not affected by pests in one way or another. Hydrangea is no exception in this sense, many insects use it as a source of food.

Hydrangea leaves turn brown, with no visible signs of damage, through sucking insects. This is especially true of aphids, mealybugs, scale, and a few others. They all form colonies under the leaves and feed on the sap of the plant. As a result, the leaves turn brown and curl.

If you notice traces of insects on the underside of a leaf spray it with horticultural oil. Prepare an aqueous solution of horticultural oil according to the instructions, then apply it to the leaves. Repeat the treatment after a few days. This will usually be enough for the hydrangea to recover after a while.

I want to say separately about mites. They are very small creatures that are only visible under a magnifying glass, but a large colony of them can cause considerable damage to hydrangeas. If you notice them, spray the plant immediately with acaricide. In most cases, you will need two or three treatments. 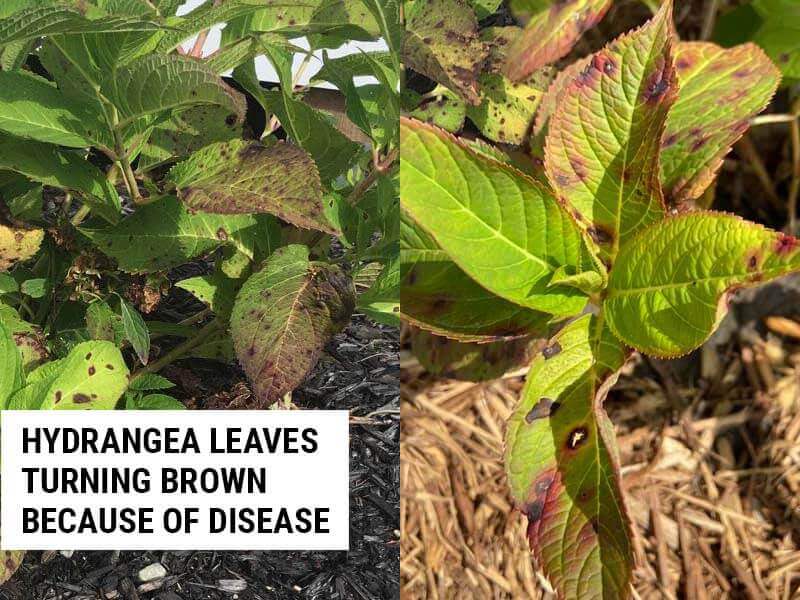 Diseases, along with pests, are a great danger to hydrangeas and other plants. Different diseases will have different effects on the plant, but a number of them will cause the leaves to turn brown.

The two most common diseases are Anthracnose and Cercospora leaf spot. The symptoms of Anthracnose are small light brown spots on the leaves, which become larger over time, and the leaves turn yellow and fall off.

Cercospora also shows up as leaf spots, but they are darker and larger. After a while, part of the leaf may turn brown.

Several other diseases have similar symptoms. All hydrangea fungal diseases can be treated by spraying with fungicide. To get good results, you will need to use products that contain chlorothalonil or thiophantate-methyl. Also, fungicides containing copper are good against these diseases.

To avoid future disease problems, keep the area around hydrangeas clear of decaying vegetation. Allow plenty of space between the shrubs for ventilation. Avoid overwatering and underwatering hydrangeas because in both cases they can become diseased.

Browning of leaves after moving hydrangea 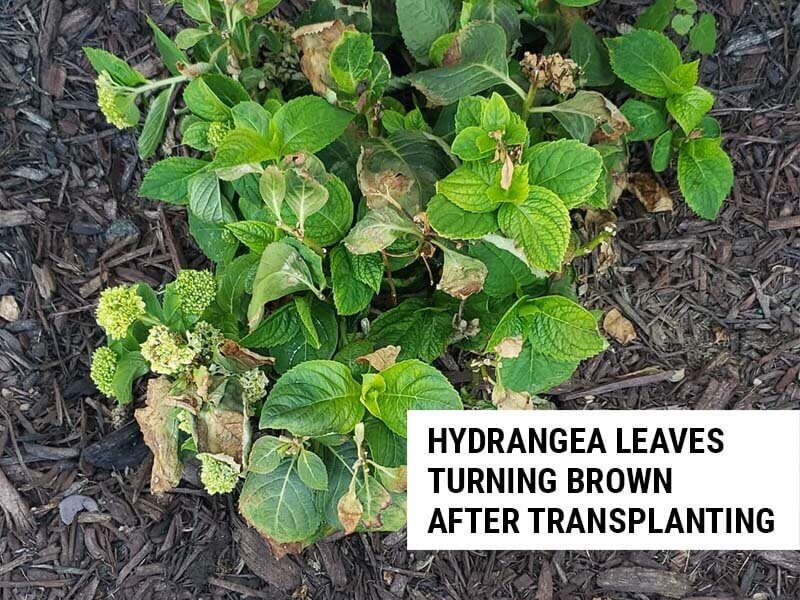 Plants grown in nurseries tend to take root poorly in gardens. This is because nurseries use a very light substrate and daily watering. In addition, their plants usually grow under a shading net.

By planting such hydrangea in heavy soil in the blazing sun, you run the risk of losing it. Or at least after planting, the leaves will turn brown or droop. This is called transplant shock.

This can also happen if you transplant hydrangeas from one place in the garden to another. No matter how carefully you do this, some of the roots will be damaged and the hydrangea will react with a change in foliage color.

If transplant shock occurs, provide the hydrangea with as much shade as possible. Also, water it when the soil is 1 inch dry but no more.

The recovery process can take several weeks to several months. During this time, the plant should remain in the shade. You can also water the hydrangea with liquid fertilizer on a one-time basis.

To avoid this in the future, choose plants with a large root system in large pots. Never loosen the root ball. When moving hydrangeas in the garden, try to damage as few roots as possible.

If the soil is heavy, add 1-2 buckets of organic matter such as compost. Shade the hydrangea immediately after planting and when you see it starting to grow you can remove the shade.

Too much heat can also be bad for hydrangea health. Like most plants, hydrangeas prefer a temperature of 70-80°F. But if the temperature rises above 90°F on a summer day, the hydrangea can get heatstroke.

Overheating usually occurs with hydrangeas growing in pots. But it can also sometimes happen to plants that are grown in the ground.

Symptoms will be drooping and curling leaves with a crisp, light brown edge.

If heat stroke occurs, move the potted hydrangea to a shady and cool place. If the hydrangea is growing in the ground mount a garden umbrella over it (or something similar) for times of extreme heat.

You can also additionally water it once. Then stick to the watering I recommend and the plant will eventually grow new leaves.

In the future, place your hydrangea in a cooler, less sunny location. 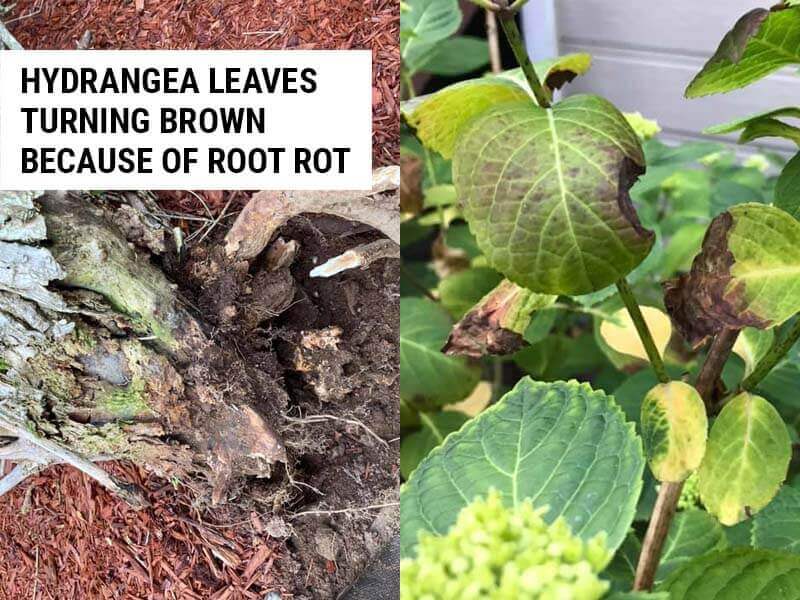 Overwatering is a real disaster for most plants, no matter what the cause. Hydrangea is considered a water-loving plant, but it is still not a mangrove. It can tolerate slightly damp soil for a while, but if the roots are constantly in the swamp, they will begin to rot.

As a result of root rot, all internal processes in the hydrangea are disturbed. Water will not flow to the leaves and they will turn yellow and wilt. But if the sun was shining hard they will turn brown at the tips and along the edge.

If you have watered the hydrangea too often or otherwise determine that the hydrangea has suffered from overwatering, the first thing to do is stop watering. If water gets to the hydrangea in any other way (from a gutter, for example) get it as far away from the plant as possible.

If the hydrangea is growing in a pot, make sure it has drainage holes.

Provide shade to protect the plant from the scorching afternoon sun. Wait until the soil is 3-4 inches dry before watering. After that, water when the soil is 2 inches dry. Remove any damaged leaves.

Next spring, transplant the hydrangea to a less moist location. Add several buckets of organic matter to the planting hole. 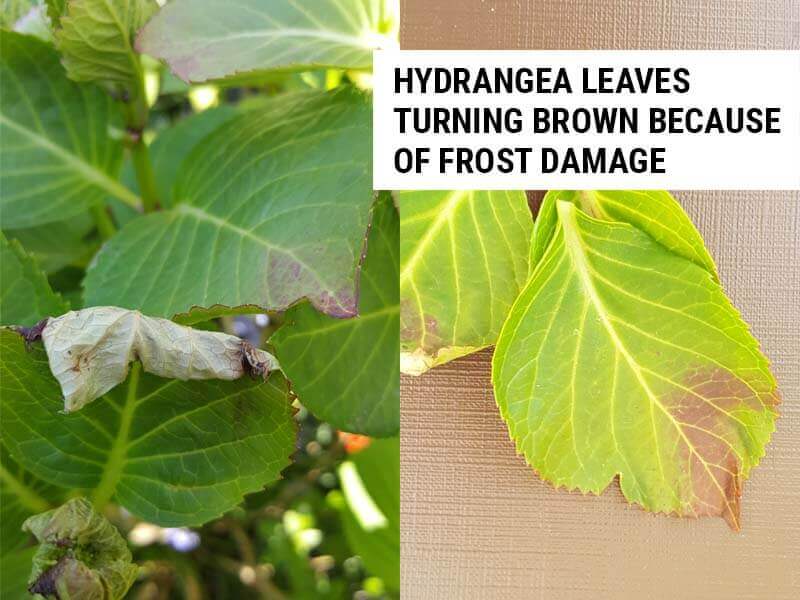 A drop in temperature, as well as extreme heat, can stress hydrangeas. Hydrangeas are generally regarded as frost-resistant, but only if they are dormant. If the leaves have already unfolded, late frost will damage them.

Not often, but sometimes it happens that in late spring or even in early summer there may be a frost. In this case, the young leaves will turn black and wither. The lower, more mature leaves will partially turn brown or reddish-brown.

If this happens to your hydrangea, remove the dead leaves. Leaves that have changed color but have not been killed will continue to photosynthesize and benefit the plant for some time. To help the plant, water it with liquid fertilizer, but the concentration should be half of what is recommended.

In the future, cover the hydrangea if the weather forecast suggests frost. There are many cover materials available for this purpose. Or move the hydrangea indoors if it is growing in a pot.