Bobo hydrangea is an excellent plant that grows 3 feet tall and 4 feet wide. The value of this variety lies in the large white panicle inflorescences that turn pink in mid-season. It is also hardy and can be grown in USDA hardiness zones 3 through 8. 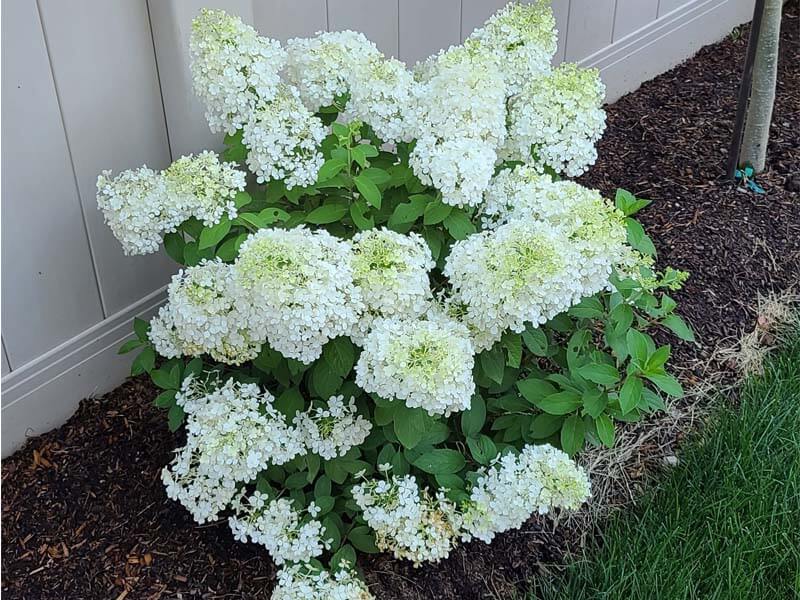 Bobo hydrangea is sun-loving and needs at least 6 hours of direct sunlight per day. On the other hand, too much sunlight in the south is harmful, but the further north you go, the more sun this plant can take.

The best place to plant Bobo hydrangea is in full sun in the morning and shade in the afternoon. Avoid planting this variety in full shade as the plant will not bloom.

The best time to plant is early spring when the sun is not yet too strong. In the heat of summer when the sun is strong it will be difficult for the plant to take root in its new location.

The best soil for Bobo hydrangea is light and drained soil. In addition, slightly acidic soil is advisable, since, in alkaline soil, the hydrangea can develop chlorosis.

Before planting, add two buckets of good quality compost to the planting hole and mix it with the native soil. If the soil is very alkaline, add some acidifier, but remember that you cannot change the color of the Bobo hydrangea by manipulating the soil pH.

Plant Bobo hydrangea at least four feet away from other plants. This is a fairly large plant and needs plenty of room to thrive.

Avoid frequent surface watering because it can cause over-watering. Constantly wet soil will cause the roots to soften and begin to rot. If root rot does occur, stop watering frequently and provide more shade. If the plant is strong, it will overcome the disease on its own.

Also avoid underwatering Bobo hydrangea, as this can cause its leaves to droop. Hydrangeas are not drought-tolerant, so you need to watch the soil moisture constantly and water if necessary. 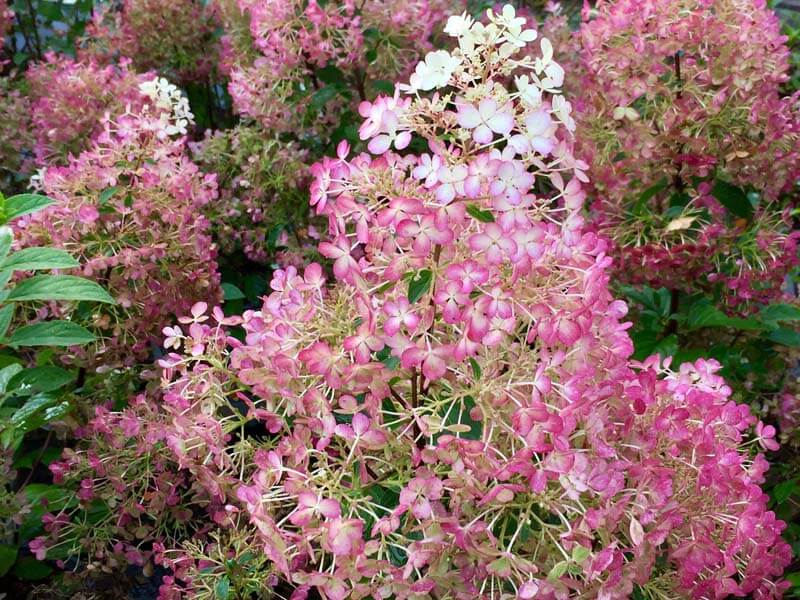 The best fertilizer for Bobo hydrangea is a slow-release granular fertilizer with the formula 10-20-10. It is worth applying 1-2 times a year. Other types of fertilizer can be applied up to 3 times a year.

If the soil in your yard is nutritious, mineral fertilizer may not be necessary. If you have added nutrient compost to the planting hole before planting, then you still need to mulch the soil around the hydrangea for it to thrive.

The best mulch is compost made from plant organic matter. The layer of mulch should be 1 to 2 inches, avoid mulching the hydrangea stems. Change the mulch every 1 to 2 years.

The first problem that can occur when growing Bobo hydrangeas is a disease. It is most commonly affected by powdery mildew and leaf spot. To avoid the disease, make sure there is good air exchange around the hydrangea and do not overwater it. If the disease happens, spray the plant with a fungicide.

The second problem is pests. Aphids and other insects can damage the leaves and cause them to curl. Also, Bobo hydrangea is often parasitized by mites which cause the leaves to turn yellow. To get rid of the insects, use horticultural oil and acaricide against mites.

The main difference between Hydrangea Annabelle and Bobo Hydrangea is the inflorescence. Annabelle has spherical flower heads while Bobo has panicles because it belongs to a different type of hydrangea. 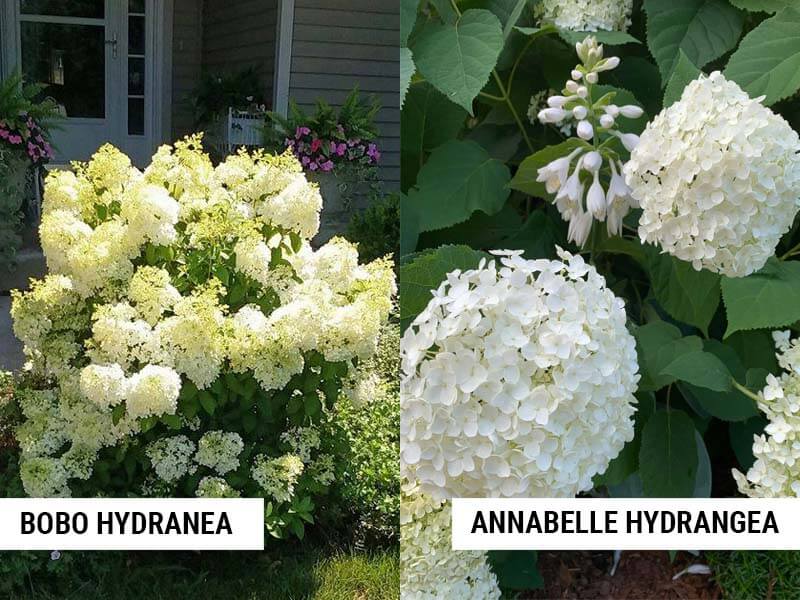 Annabelle also has white flowers that turn a slight greenish tint mid-season. Bobo Hydrangea, on the other hand, has creamy white panicles that turn light pink in spring.

The most significant difference between Wee White Hydrangea and Bobo Hydrangea is the flowers. Wee White has spherical, slightly flattened clusters of white flowers. At the same time, Bobo Hydrangea has panicle-shaped inflorescences that are greenish-white at the beginning of the season and light pink later.

The second difference is that Wee White Hydrangea is more compact than its competitor. Wee White does not grow more than 3 feet in height and width while Bobo can reach 5 feet.

Wee White is also a repeat-blooming hydrangea, which is a definite advantage. Whereas Bobo only blooms once a season, but it lasts a long time.

Their color is also different. Incrediball Hydrangea begins the season in white blooms and becomes slightly greenish in the middle. Bobo Hydrangea first has greenish-white flowers that eventually turn into light pink. 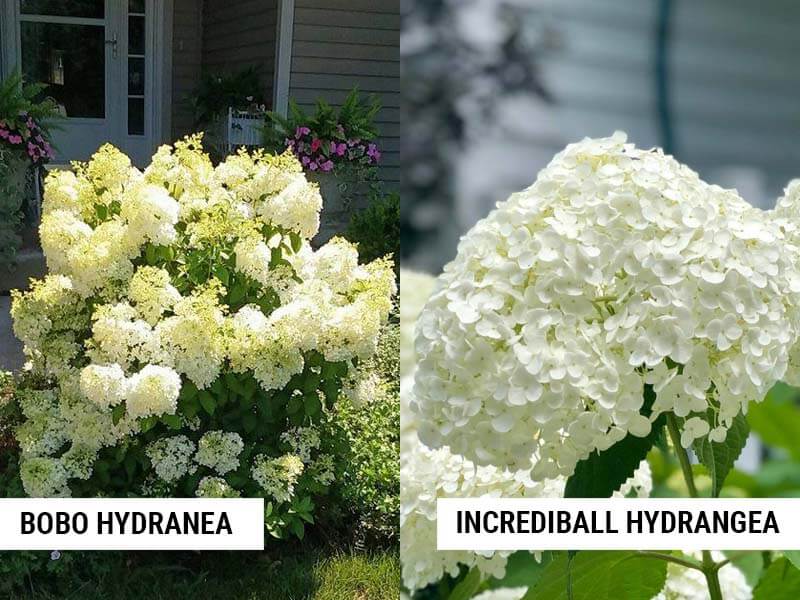 The flowers are the most distinctive feature of Bobo Hydrangea and Little Lamb Hydrangea. Bobo has white panicles, white with greenish tips, which change to pink over time. Little Lamb, on the other hand, has white panicles, the top half of which is pink from the beginning to the end of the flowering period. Additionally, Little Lamb has very fine petals which make the panicles more delicate.

Bobo is also an early flowering hydrangea because it blooms in the second half of spring or early summer. Little Lamb blooms in mid-season but lasts a bit longer.

Another difference is size. Little Lamb is larger, reaching 6 feet across, while Bobo is up to 4 feet across.

Another difference is that the Bobo Hydrangea panicles are denser and, as a result, are more noticeable against the background of the green leaves. Whereas Little Quick Fire panicles are looser and have a less prominent silhouette against the foliage.

Otherwise, the hydrangeas are very similar. They are about the same size and hardy (zone 3-8). Both tolerate full sun and are early blooming hydrangeas.

In addition, Bobo Hydrangea blooms early in the season whereas Fire Light Tidbit belongs to the late-blooming hydrangeas.

The second difference is size, Hydrangea Bombshell is slightly more compact than Bobo Hydrangea. If you are looking for a dwarf Hydrangea, the Bombshell is better suited.

Both hydrangeas have panicle inflorescences that are creamy white or greenish-white and turn pink at the end of the season. They also bloom on new wood and can tolerate the climate in almost all of the United States.

Bobo Hydrangea differs from Limelight Hydrangea mainly in flowering. Bobo has white inflorescences with slightly greenish tips and turns light pink as the flowers mature. The Limelight Hydrangea, on the other hand, has lime-colored flowers from the beginning of flowering and then turns pink or even light red. 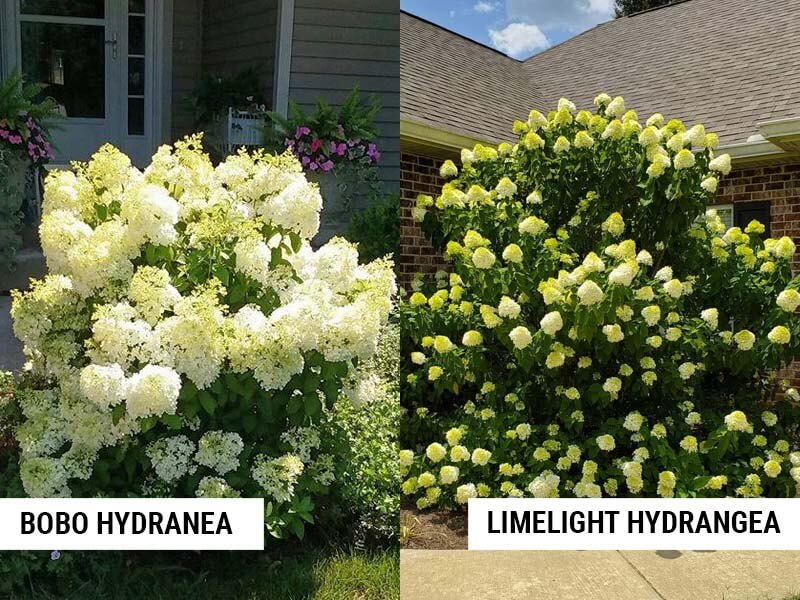 The second major difference is that Limelight Hydrangea is almost twice as big as Bobo and can grow up to eight feet high and wide. Whereas Bobo usually does not grow more than 4 feet tall and wide.

Both plants, like all panicle hydrangeas, tolerate full sun and almost all types of soil. Both Bobo and Limelight can be grown in almost all of the United States.