I have been growing hydrangeas for many years and my knowledge base keeps growing. But every year I learn something new because nature is dynamic and always challenges us. Today I want to tell you about one of the most common challenges.

Hydrangea leaftier and other sucking insects, dehydration, intense sun, or late frost are the main causes of hydrangea leaves curling. To fix the problem, remove any curled leaves and spray the hydrangea with horticultural oil. Water the plant when the soil is 10% dry and provide it with shade in the afternoon.

Insects are the main reason of hydrangea leaves curling 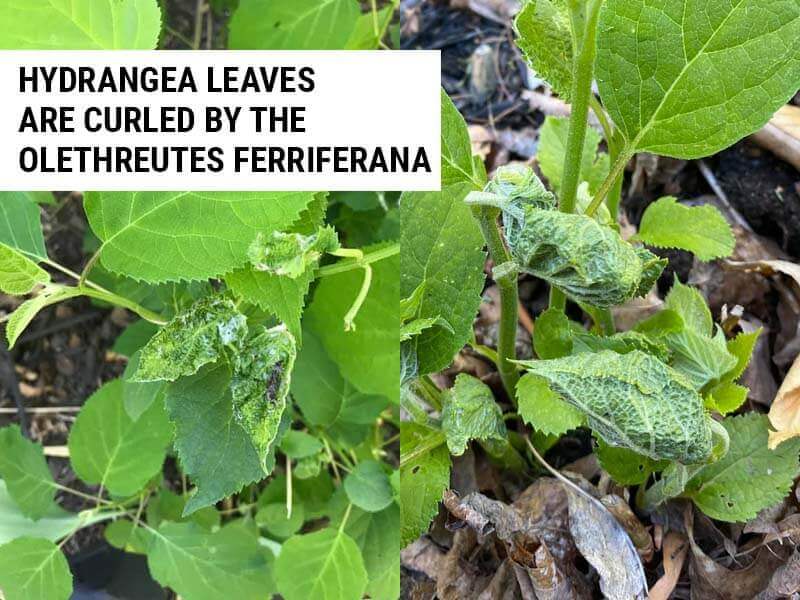 The spreading of insects on the leaves in most cases causes deformation. Conventionally, these insects can be divided into two groups depending on the type of impact.

The first is hydrangea leaftier (Olethreutes ferriferana). It is a small moth that lays eggs on hydrangea leaves. When the larva hatches, it begins to join two or more young leaves that are placed very closely together with its fibers. The result is a cocoon of leaves in which the larva feeds on the sap of the leaf. It can also eat the flower buds if they are in the cocoon.

The method of controlling this pest is to remove the leaf cocoons along with the larvae. This way you will lose some of the flowers but prevent further spread. Anything you remove from your hydrangea will have to be burned.

I also recommend spraying hydrangeas with horticultural oil or pesticide to prevent re-infestation.

The second type of pests is sucking insects such as aphids, mealybugs, mites, etc. These insects settle on the underside of the leaves and feed on the sap of the hydrangea. As a result, the center of the leaf bends upward and the edge of the leaf downward. Also, tubercles can appear on the leaves.

To get rid of aphids and other insects you should spray hydrangeas with garden oil. Against mites, you need to spray the leaves with acaricide. 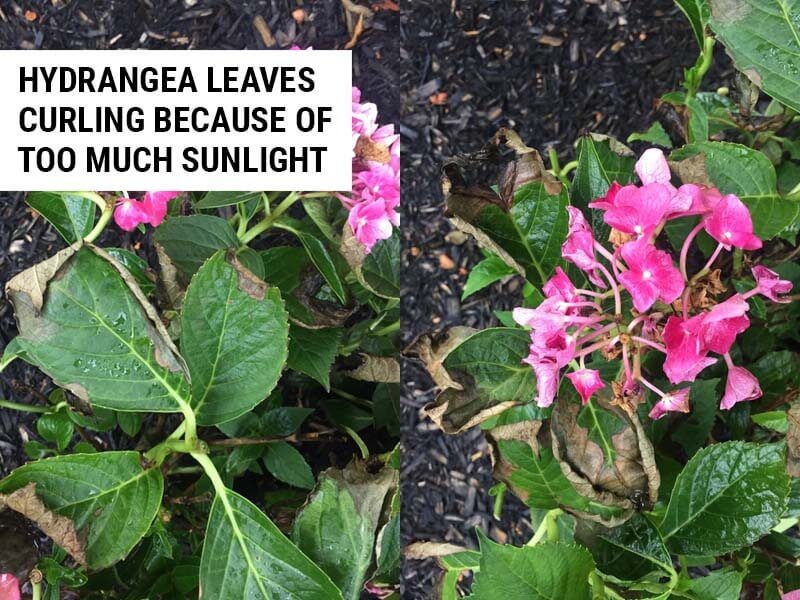 Hydrangea leaves curling because of too much sunlight.

A full day of sunshine can be too much of an ordeal for your hydrangea. As a result, the leaves can get burned and begin to curl from the tips and along the edge. The next thing that will happen is that the leaves will become crispy and fall off. In addition, the inflorescences may also burn in the sun.

This happens most often in the south with Bigleaf hydrangeas. The farther north you live, the less risk of the leaves curling up in the sun. Hydrangea paniculata tolerates full sun much better than other species.

In this case, the best solution is to provide shade for the hydrangea. This can be done using a garden umbrella. Or you can plant another plant in front of the hydrangea to shade it from the afternoon sun. But do not shade the hydrangea too much; it still needs 4 to 6 hours of the morning sun. 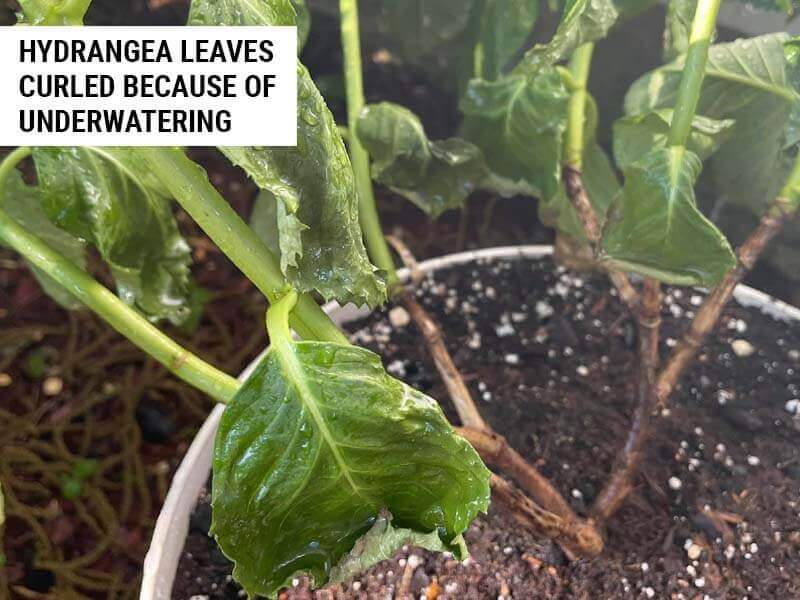 Hydrangea leaves curled because of underwatering.

Dryness is an unacceptable condition for hydrangeas. Even a brief drought can leave a mark on the leaves. Dehydration problems most often occur in the summer heat or if the hydrangea is growing in a pot.

If the soil around the roots has dried out and the sun has been bright, the hydrangea leaves will begin to curl at the tips. In addition, they will burn and change their color to brown or even black.

To avoid all this, you need to water the hydrangea regularly. The best way to check whether you need to water is to touch the soil surface with your finger; if it is 1 inch dry, the plant needs water. It’s ideal if the soil is always slightly moist but not wet. Achieving consistently moist soil is not easy, so don’t let the soil dry out more than 1 inch.

If your hydrangea is growing in a pot, you will have to water very often because the pot can dry out in one day in the heat of summer. 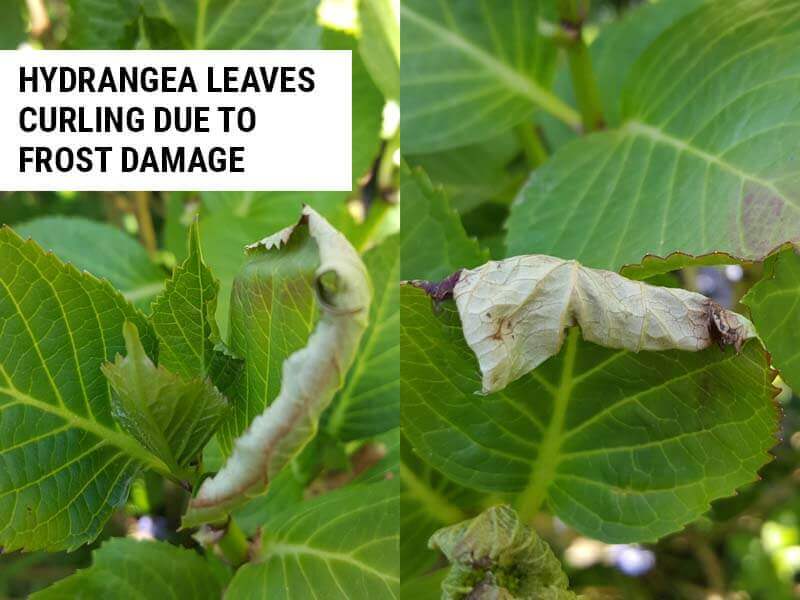 Late frost is one of the most dangerous enemies of most plants. In the spring, when the hydrangea has already begun to unfold its leaves, a significant drop in temperature can occur, causing the plant to suffer.

If by the time the frost hits, there are already mature leaves, they will receive partial damage in the form of black spots. But they may stay alive and photosynthesize until the end of the season.

Young leaves are the most susceptible to frost damage. They are most likely to turn completely black and curl up in clumps. After a while, they will shrivel up and fall off. Together with young leaves, the inflorescence buds are often affected, which means that the hydrangea may not bloom in the current year.

If frost has damaged the leaves of your hydrangea, there is nothing you can do except removing the damaged parts. The hydrangea will regenerate throughout the season and can be helped by watering it once with a liquid multipurpose fertilizer.

In the future, cover the hydrangea with a garden fabric if there is a risk of late frosts.

If the hydrangea roots are left in water or very wet soil for a long time, root rot will occur. As a result, the leaves will not get any water and will curl, turn yellow, and fall off.

This usually happens when you water the hydrangea too often or if it is growing in heavy clay soil. Overwatering for a long time can kill the plant.

The first thing you need to do is water properly. Water the hydrangea when the soil has dried 1 inch deep, and the amount of water should be significant. You need to use deep watering so that the entire root system gets water.

Also, if overwatering occurs too often, transplant the hydrangea to a place that does not stagnate. Use compost and other organic matter to loosen up the native soil. Also, fill the bottom of the planting hole with some stones to create drainage.

Herbicides can cause significant damage to your hydrangea. Once on the leaves, they are absorbed into the tissues and disrupt the internal processes of the plant. As a result, the leaves turn pale and twisted, then become crispy and fall off.

This can happen when using herbicides for lawn or other purposes. You could accidentally spray a hydrangea and its leaves will let you know about it right away. Even selective herbicides can cause damage.

To prevent this from happening, avoid using herbicides in your garden. Or at the very least, don’t work them near hydrangeas.

If your hydrangea is damaged by herbicide, remove the damaged leaves and water it. You can also set up a shade for the hydrangea for a few days. If the damage was minor, the plant will recover fairly quickly.

Diseases can cause hydrangea leaves to curl 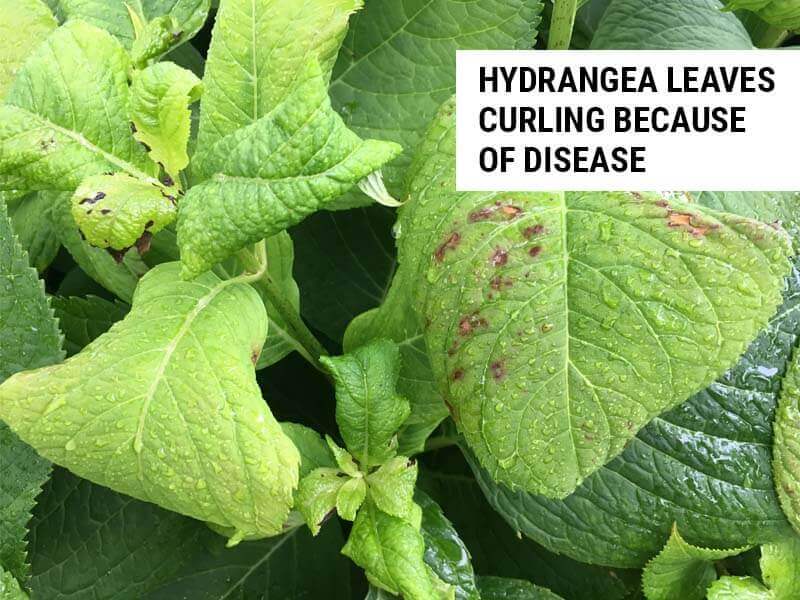 Hydrangea leaves curling because of disease.

The disease is also one of the most common causes of deformed hydrangea leaves. Among the diseases, root rot is the most common. I have already talked about this disease in the section on overwatering. But many other diseases leave noticeable marks on hydrangeas.

The first type is fungal diseases that damage the leaves, leaving spots on them. The leaves also curl and turn yellow. These include anthracnose, which is probably the most common.

Various molds and rots can also be included in this category. All of them parasitize the leaves and spoil their appearance.

To get rid of this type of disease you need to keep the garden clean. Don’t leave plant debris near hydrangeas to rot. Also, water your plants in moderation and make sure there is good air movement in the garden.

At the first sign of disease, spray your hydrangea with fungicide. Good results can be obtained by using a copper-based fungicide.

The second type is a viral disease. Although viruses are quite rare they can still infect your plant and deform the foliage. Unfortunately, there are currently no effective methods of dealing with them. 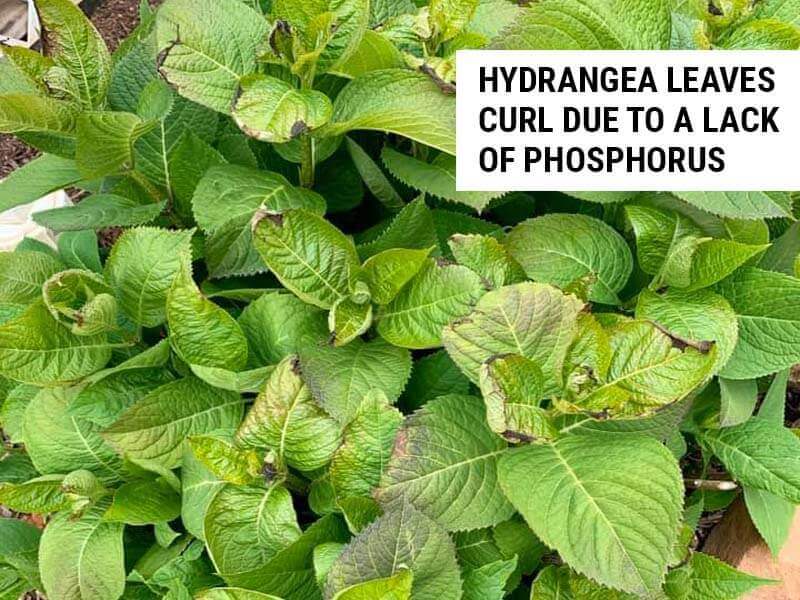 Hydrangea leaves curl due to a lack of phosphorus.

A lack of trace elements can cause deformed foliage. This is especially true for phosphorus and calcium. Both of these elements are responsible for the proper functioning of the plant and if they are not sufficient, the hydrangea leaves will curl upwards.

Phosphorus is also responsible for the root system and the proper absorption of other minerals from the soil. If there is not enough phosphorus, the leaves will not only become deformed, they will also change color or the plant will not grow.

Check the pH of the soil before fertilizing. If it is too alkaline (pH 7.5 or higher), you need to acidify the soil with an acidifier or compost.

Fertilize hydrangeas in early spring with a slow-release fertilizer. An all-purpose fertilizer and a fertilizer designed specifically for hydrangeas will work equally well. Fertilize again in mid-summer at the earliest. Avoid fertilizing hydrangeas over the winter. 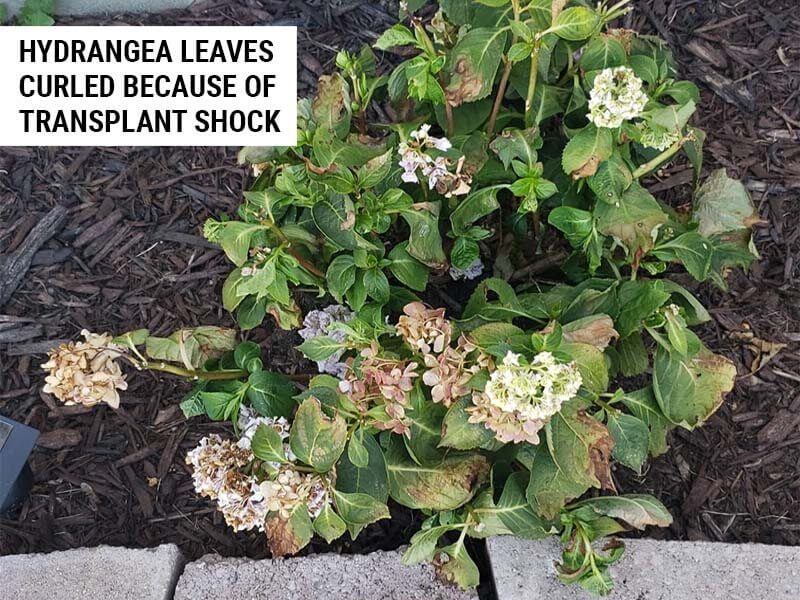 Replanting in some cases has serious consequences. This is very often the case if you bought a hydrangea from a nursery and planted it in your yard. In nurseries, it was grown in specific conditions (soil, watering, etc.).

But you can not recreate such conditions in your garden, and the hydrangea gets stressed as a result. Outwardly, this can be seen in the twisted, yellowed, or crispy leaves.

To avoid transplant shock, you must buy hydrangeas with as large a root system as possible. If you are transplanting it from one place to another, do it as gently as possible to damage as few roots as possible.

At the new location, place a garden umbrella over the hydrangea for a few weeks. The shade will help the hydrangea suffer less from the scorching sun. Water it regularly and don’t let the soil dry out more than half an inch. Also, avoid overwatering the plant.