Hostas are relatively easy to care for, but you will still need to put in some effort to achieve successful results. It is especially important to properly prepare them for the dormancy period, otherwise, you may experience problems or even lose plants.

In the fall, prune the hosta at ground level and keep the soil slightly moist. Also, be sure to mulch the hosta with at least 2 inches of mulch and protect it from voles.

Read on to learn more about everything you need to do in the fall. Also, check out the main article Growing and Planting Hostas. 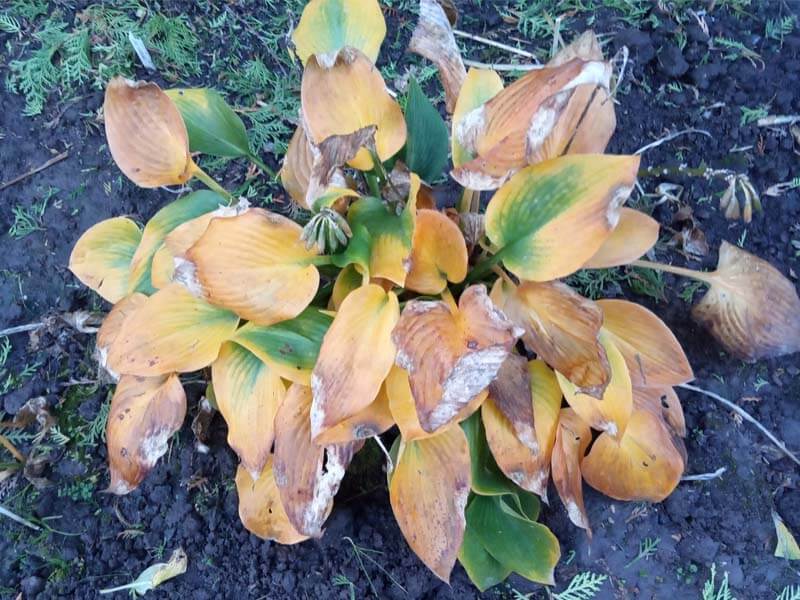 Hosta in the fall.

Cut back the hosta

The first thing to do with hostas in the fall is to prune them. When the leaves begin to die off, the best thing you can do is to remove them. This practice has several advantages, so let’s talk about it in more detail.

It is difficult to give an exact answer as to when to trim the leaves because it depends on certain conditions. There are three periods when it should be done.

The first is the pruning of leaves and stems in early or late fall. At this time, the foliage may already be turning yellow and should be removed.

Be sure to clean and sterilize all tools after use. Also, remove all leaves away from the garden.

All you have to do is trim the leaf petioles one inch above ground level.

If you try to trim less than one inch, you may damage the rhizome, causing it to rot over the winter. Don’t leave leaves to rot next to the plant.

Some people recommend leaving them to mulch the surface. However, I don’t recommend this because the leaves will rot and nothing good will come of it, and it is better to mulch the hosta with another material, but more about that later.

Read more: How to cut back hostas in the fall?

One of the most important things you need to do is water your hosta, even if you have already removed its leaves.

The fact is that the plant continues to live and use water through the winter. Also, during dormancy, the hosta uses the water that has accumulated in its tissues over the fall.

Therefore, the soil should always be kept slightly moist. Don’t let it dry out more than an inch.

Fortunately, it usually rains enough in the fall, so the hosta doesn’t need to be watered often. However, if it doesn’t rain, you will need to water it.

Check the soil moisture from time to time. If it is more than an inch dry, water the hosta using no more than a gallon of water.

The next thing you need to do is mulch your hostas. Mulch has many advantages, one of which is that it keeps the heat in the ground longer.

This is very important because the plants will overwinter better in these conditions. The mulch also keeps moisture in the soil better.

You can use different materials as mulch, but compost works best. I recommend mulching only with quality compost from good suppliers. Otherwise, your plants may suffer.

The mulch layer should be 2 inches thick. This is enough to get all the benefits of mulch.

If a thicker layer is poured, it will be difficult for air to reach the surface of the ground and various diseases can occur.

Try not to pour compost on top of the rhizome. However, a small amount of compost won’t hurt, but will protect against hard frosts.

If you cover the top of the plant for the winter with a thin layer of compost, do not forget to remove it in early spring.

The mulch should be scattered around the plant 2-3 feet in diameter, depending on its size.

Protect your hostas from voles

These pests usually do not harm hostas during the growing season. However, during the cold part of the year, when food is scarce, they like to eat the rhizome of the hosta.

You will often see that some plants have not come out of dormancy or are growing slowly in the spring. The first thought that arises is frost damage. But this is not always the case, very often it is voles that eat away at the roots and crown, and the plant may not even recover afterwards.

To avoid such troubles, you need to protect your hostas. There are many ways to do this, but the most effective is to water the soil with castor oil.

You need to take a five-gallon container of water, add a third of a cup of soap and mix it all up. Then pour in three cups of castor oil and mix well.

This mixture can be used against voles. Pour one gallon around each hosta bush. If the plant is large, you can water two gallons of the solution.

That’s it, voles don’t like the smell of castor oil and won’t come near your hostas.

Read more: Do I need to do anything to my hostas before winter?

You need to avoid fertilizing your hosta in the fall. Otherwise, it might not go into hibernation or even produce new shoots. This will result in frostbite and the hosta will die.

You don’t want to fertilize with minerals in the first place because they work relatively quickly and are quite strong. It is best to apply this type of fertilizer no later than July. But if we’re talking about slow-release fertilizer, apply it once a year in spring.

As for organic fertilizer, such as compost, you can apply it in the fall. For example, you can use it as fall mulch or when planting hostas as a soil improver.