The amount of water a plant consumes may vary depending on many factors. Mistakes in this matter can lead to trouble.

Blue spruce should be watered as often as the soil is 2 inches dry. When watering, use 1-2 gallons of water or more depending on the size of the plant. Watering is mandatory until the Blue Spruce is fully established.

That was the short answer to the watering question, you will learn more about it later in this article. Also, be sure to check out the article How to Properly Look After a Blue Spruce. 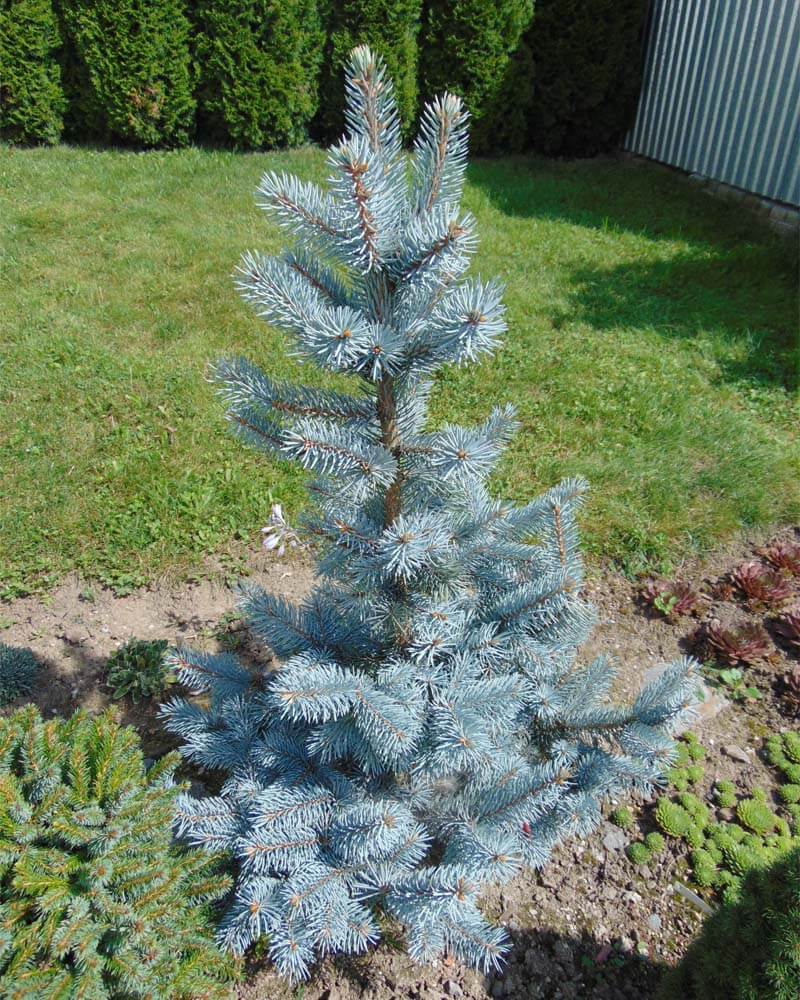 In general, you should water the Blue Spruce until it is fully rooted. This can occur in the second or even third year after planting.

The best practice is to water the first and second years. In the first year, water as soon as the soil is a little over an inch dry because newly planted spruces are more susceptible to lack of water.

In the second year, reduce watering and only water when the soil is 2 inches dry. The easiest way to check soil moisture is with a finger test.

If the spruce is less than 3 feet tall, use 1-2 gallons of water. If you’ve planted a large tree, the amount of water can be 3 gallons or more. It is important that the water penetrates the roots and not just wet the topsoil.

You can use a drip hose to make things easier for yourself. Run water through it for 10-20 minutes and it will do its job.

The closer you get to winter, the less you need to water. Autumn and winter are usually wet, so you don’t have to worry about watering. In winter, you almost don’t need watering at all except in very dry winters.

One of the most serious problems in growing Blue Spruces is overwatering and root rot. In most cases, this happens due to irrigation on a schedule. As a result, the soil gets very wet and the roots start to rot. The needles may become discolored or brown.

Unfortunately, root rot is very difficult to treat so avoid overwatering and only water when the soil is a few inches dry.

Root rot can also be caused by poorly drained soil or a high water table. To fix this you need to put about half a bucket of stones in the bottom of the planting hole and improve the native soil by mixing it with a soil conditioner.

Another cause of overwatering is rainwater. If the Blue Spruce grows close to where the rainwater drains off the roof, the roots can also start to rot. To fix this, divert all water flows in a line away from the spruce.

Blue spruce is especially susceptible to lack of water in the first and second years after planting. This is due to the fact that the roots have not yet penetrated into the surrounding soil and the tree receives water only from the volume of soil in which it was potted.

Sometimes spruces get a strong planting shock and do not establish roots for the entire first growing season. It is not until the following year that their root system begins to develop.

If the plant is not watered in time during this period, it can drop its needles and die.

To get a positive result, constantly check the soil near the roots of the newly planted spruce and do not let it dry out by more than an inch.

The second cause of Blue Spruce dehydration is sandy soil. If you have such soil in your yard, improve it with compost before planting. Also, make sure to mulch with pine bark to avoid overheating the root system and drying out the soil too fast.

Special mention should be made of potted watering because Blue Spruce is a large plant and growing it in a pot will be a challenge.

During dry and hot weather the potting soil can dry out in one day so you need to keep a close eye on it. Water the potted spruce as soon as the soil is 1 inch dry.

To avoid overheating, place the pot on the ground on ground, not on concrete. Also, if possible, place the pot behind some kind of barrier so that it gets a minimum of sunlight. At the same time, the spruce should get at least a few hours of direct sun a day.

Be sure to mulch the surface of the pot with organic mulch, but do not cover the tree trunk. Make sure that the pot has drainage holes.