Water is the basis for the development of all living organisms, including plants. Lack or overabundance of water can cause serious plant problems.

Water Dwarf Alberta Spruce as often as the soil is 2 inches dry from the top. You need to constantly monitor the moisture content of the soil and water only if it begins to dry out, avoid watering in rainy weather.

Watering according to a schedule can lead to root system problems because the soil dries out much faster in hot weather than in cloudy weather. Give it water when it needs it and not when the schedule tells you to.

These recommendations are general, but there are cases when you should water in a slightly different way to keep Dwarf Alberta Spruce thriving. These cases and other watering issues will be covered in this article. 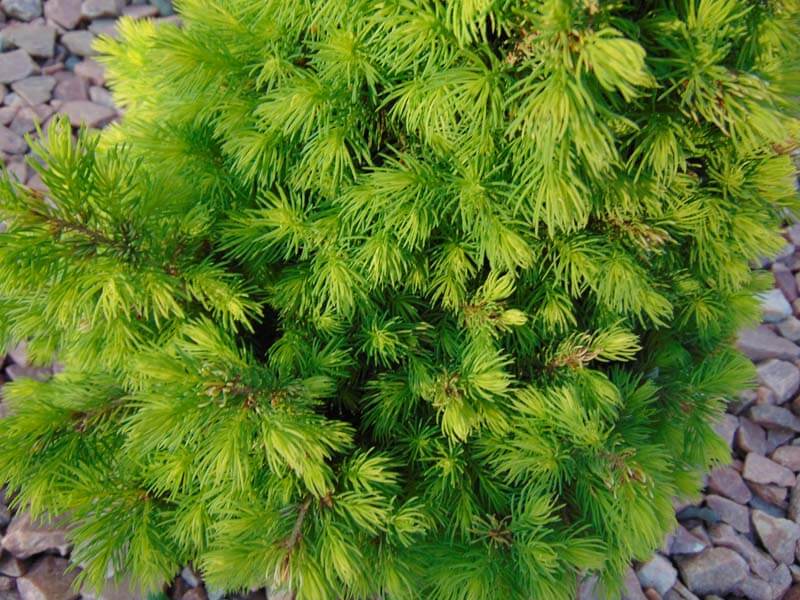 How much water does a Dwarf Alberta Spruce need?

Dwarf Alberta Spruce needs at least 1 gallon of water each time it is watered. The larger the plant, the more water it needs. Large specimens over 5 feet tall may require 3 gallons of water.

I should say here that well-established spruce needs almost no watering. If Dwarf Alberta Spruce has been growing for more than three years in the same spot and looks good, in most cases you can stop watering.

But if you want the spruce to grow faster and be lusher, water it when you have to (after 2 inches of topsoil dries out).

The best way to water is to use a drip hose. Put it around the trunk and turn it on for a few minutes. The pressure should be minimal. This way you will get the whole soil well-watered.

By watering the spruce with the hose nozzle, most of the water will go to the side. As a result, the roots will not get enough water and you will have to water again.

If you water Dwarf Alberta Spruce too often or use too much water, the soil can become boggy. This is called overwatering.

This will cause the root system to become very soft and suffer from a lack of oxygen. Such roots are very prone to rot. If root rot begins, the spruce will lose some or all of its needles.

To avoid root rot, do not water Dwarf Alberta Spruce before the soil is 2 inches dry. Avoid watering in rainy weather or winter.

If root rot happens, stop watering and allow the soil to dry 4 inches. Water the spruce very sparingly over the next few months. Move all surface streams of water as far away from the tree as possible.

Very often spruce will be able to recover from root rot on its own. You have no choice but to wait. Avoid fertilizing or replanting the spruce as this will only make it worse.

In some cases, Dwarf Alberta Spruce may suffer from dehydration. This happens very often in dry and hot summer weather. The situation is aggravated if the soil in which the spruce grows is sandy.

In most cases, you should not expect fatal consequences. The color of the needles may change to yellowish or pale green. The growth rate will also decrease and the crown may become less lush.

If the tree is well-rooted, it will be able to tolerate a relatively long period of drought (up to 1 month). But it will not look beautiful.

So even fully rooted Dwarf Alberta Spruce needs to be watered from time to time. Keep an eye on the soil and if it dries out noticeably, water the tree generously.

Newly planted spruce trees are the most susceptible to dehydration and this is the subject of the next chapter.

Newly planted Dwarf Alberta Spruce should be watered as soon as the soil is 1 inch dry. In summer in dry weather, this can be 1-2 times a week or even more often.

The difference with newly planted spruce is that they are usually grown in peat or other organic matter in nurseries. Organic matter can hold a lot of water, but it also dries out relatively quickly because of its loose structure.

When planting spruce, the root ball should not be destroyed and the soil should not be removed. It should be planted as-is, filling the planting hole with native soil. As a result, as long as the spruce does not let the roots into the garden soil, it will be in the substrate from the nursery.

In a drought, it may be that the garden soil is still wet and the soil around the roots of the newly planted Dwarf Alberta Spruce is dry.

To avoid this, constantly monitor the soil around the roots without letting it dry out more than 1 inch, and be sure to mulch the spruce. Pine bark is best for mulching. The mulch layer should be 2 to 3 inches thick.

It may take 1 to 2 years for the spruce to fully root.

Separate attention should be paid to watering Dwarf Alberta Spruce in pots. The potting soil mostly consists of organic matter, which as you already know can dry out quite quickly.

So you have to be very careful not to let the potting soil dry out more than 1 inch. If the potting soil dries out too much it will be quite difficult to soak it back up. This will require you to submerge the pot in water, which means you will have to use bottom watering.

To avoid this, it is best to constantly monitor the potting soil and keep it moist. To slow the rate at which the soil dries out, mulch the potted spruce with pine bark.