Proper planting ensures that hostas grow well and will be comfortable for a long time as a result. However, the improper planting depth can lead to problems with the plants.

Next, I will tell you all the intricacies of proper planting depth and what can happen if you do something wrong. 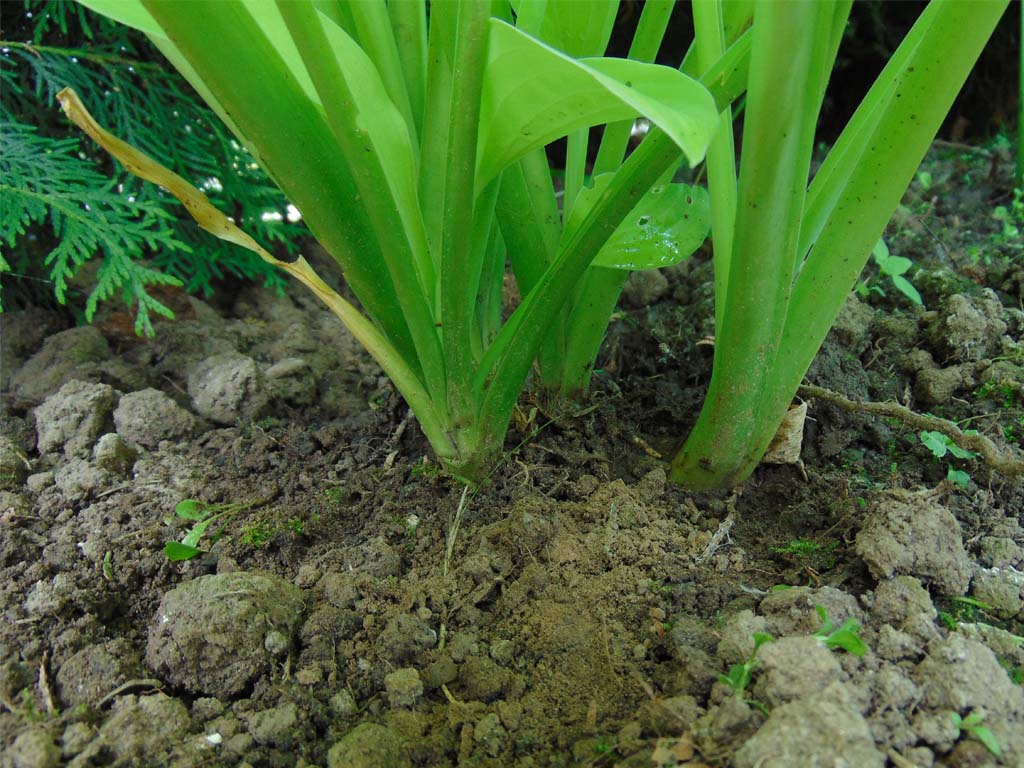 Do not deepen the crown

When planting a hosta, you don’t want the petioles and the center of the crown to be covered with soil. If you bury the plant, it may begin to rot.

First, you need to dig the hole in which the hosta will grow. I recommend digging a hole twice as big as the container the hosta is growing in. If you are transplanting it from another location to a new one, the size of the hole should be twice the size of the rhizome in both width and depth.

Next, you need to prepare a soil mix. The best would be a mixture of compost and garden soil. The proportion of these two components should be 50% to 50%. Use good compost prepared with the right technique.

Otherwise, you could damage your plants. Poor-quality compost can not only contain diseases and pests, but also aggressive substances that can easily destroy the roots.

Fill the hole with the prepared soil a little more than halfway. Place the hosta with its roots in the center of the hole. The joint between the petiole and the rhizome should be at ground level.

Then fill all the free space around the roots with the prepared soil mix. Compact the soil a little and add more if necessary. As I said before, the soil should not be higher than the base of the petioles. Also, do not pour soil into the center of the crown.

Water the hosta with plenty of water. After a while, the water will run off and the soil will settle, so you will need to add more soil mix. Then water the hosta again.

In the fall, the leaves will wilt and need to be removed, don’t let them rot around the plant. As a result, you may see dormant buds above the ground. Don’t worry that they may be damaged by frost, the hosta is a very hardy plant.

However, when winter comes, hostas hibernate and use up their internal water reserves. Sometimes it happens that there is no snow, but the sun is shining quite strongly.

As a result, the buds can lose too much moisture. Also, in the absence of snow, frosty winds can still do some damage to hostas, especially in the northern United States.

What if too deep?

The reasons why the crown of a hosta can end up underground are various. The first and most common reason is improper planting, to avoid this, plant the hosta correctly, I wrote about this above.

The second reason is the subsidence of the soil under the plant. Often this happens because the soil in which the hosta was growing was very loose. Nurseries use a very loose peat-based substrate to grow the hosta. In such conditions, the plant grows quickly and has a good appearance.

However, if you buy a hosta in such a substrate and plant it in the garden even at the same level as the surface, after a while, the commercial substrate will collapse and the plant will be deep. To avoid this, remove the hosta from the pot before planting and shake out all the loose soil, but don’t damage the roots.

Then plant the hosta in a soil mixture that contains garden soil and compost. You can read more about this in the previous chapter.

Suppose, for some reason, your hostas are buried too deeply in the ground. The first thing you need to do is remove the layer of soil around the petioles so they don’t sit below ground level. Remove excess soil around the shrub 4 to 6 inches or even more, if necessary.

However, this is a temporary solution, as there will still be depth near the rhizome and water will accumulate there. As a result, the petioles and crown can rot. You should therefore repot the hosta higher up.

Dig up the hosta with as many roots as possible and make sure that you don’t damage the plant. Repot in the same spot. Fill the hole with a layer of soil 1-2 inches high (or more, if needed), then place the hosta on top and backfill everything around it with soil.

Too deep planting can cause rot

Usually if the hosta is buried, the petioles will rot first. Rotting begins at the bottom and the leaves turn yellow. Then the petiole breaks under the weight of the leaves and falls to the ground. In this situation, it is not too late to save the plant.

As soon as you notice that the outer leaves have begun to yellow, immediately check to see if the soil is above the base of the petioles. If it is, remove the layer of soil as I wrote above.

Then tear off the damaged petioles. In the early stages of the disease, the crown does not begin to rot and only the individual petioles are affected.

After cleaning the plant, spray it with a fungicide solution. Repeat the spraying after a while. Also spray the soil around the hosta.

If you notice the problem too late and the plant is too badly affected, dig it up and clean all the soil from the roots. Rinse all the roots with water and use a sterile tool to remove any diseased tissue.

Then water the hosta with fungicide and dry it in the shade for a while. Then plant it in clean soil (in a pot) and move it under a roof in the shade. A waterproof cover is needed to control the amount of water the plant will receive.

Water the hosta moderately. The regeneration process can take an entire season.

The roots may come out of the ground

Sometimes it happens that winter temperatures change frequently. Frosts and thaws are repeated over and over again. As a result, the top of the hosta roots are pushed to the surface and the roots become visible. This often happens with low-growing varieties.

If you have a similar situation, simply add some soil to cover the roots. Also, spread a thin layer of mulch around the hosta. If the roots are too high, the hosta should be transplanted deeper.

How deep should soil be for hostas?

Hostas need deep soil because they are moisture-loving plants, and their root system reaches deep to extract water.

However, if you grow them in pots or trays, depth is not too important. Compact varieties can grow in pots 6 to 8 inches deep, while larger varieties need 10- to 12-inch containers.

Here, timely watering is more important. In dry, hot weather, a hosta pot can dry out in one day. So make sure to water them on time.