Any garden needs maintenance and if you don’t clean it regularly, it will quickly become overgrown with weeds. With hostas, this issue is a little easier because they are able to suppress most weeds. Nevertheless, there is a lot to talk about.

To keep weeds out of the hostas, mulch them with organic matter 2-3 inches thick. Also, remove weeds with your hands from time to time.

Next, we’ll talk in more detail about all the ways you can rid your hostas of weeds. 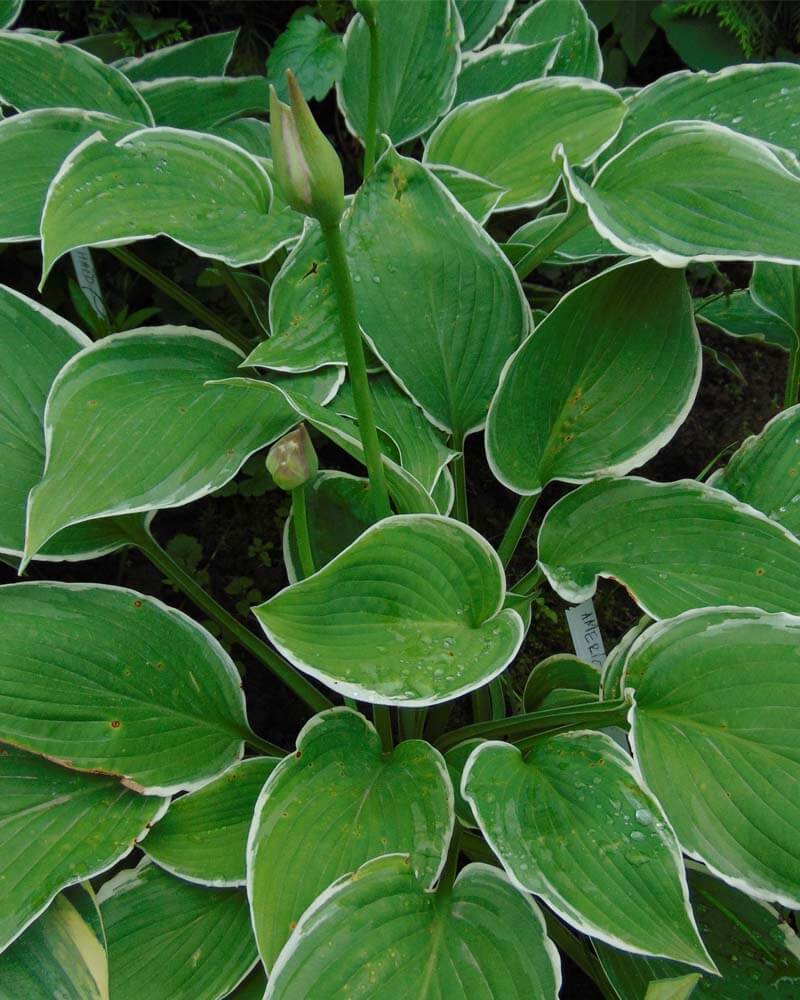 Mulching is the best way to prevent weeds from germinating near the hosta. Those seeds that fall on top of the mulch won’t be able to germinate because they won’t get enough moisture. The surface of the mulch dries out rather quickly.

Those seeds that are under the mulch will not be able to lift the weight of the mulching material. As a result, they will die without seeing sunlight.

To achieve such a result, you need to use organic matter for mulching. Pine bark or wood chips are the best for this purpose. Make sure that these materials are of good quality and pest free.

Avoid mulching hosta petioles. There should be a gap of at least 1 inch between the leaf petioles and the mulch. This is to keep the base of the petioles from getting too wet. This will prevent the possibility of petiole rot.

In addition to preventing weeds, mulch slows the soil drying out, which is very good in hot weather. Hostas will be much more comfortable in winter under mulch than without it.

Read more: How to put mulch around hostas?

Remove weeds with your hands

The second way to fight weeds is to remove them by hand. In fact, this is a very simple and most importantly organic way.

So you can easily control large weeds that can compete with hostas. You don’t need to remove small weeds because the hostas can easily choke them out. Of course, this applies to large and medium-sized hostas, around dwarf hostas you will have to work more thoroughly.

Also, be sure to use gardening gloves. Otherwise, you can hurt your hands a lot.

If you mulch your hostas, you will get rid of most weeds. Remove the few that sprout with your hands and that’s it. These two actions are enough to keep the weeds under control. However, if you need to, you can go further and use other methods, including chemical ones.

Avoid gaps between the hostas

Another effective way to reduce weeds around hostas is to plant them without gaps. As I mentioned above, hostas are large enough to suppress weeds that grow around them.

Also, not all weeds are able to survive in the shade that the hosta prefers. So planting a hosta in full shade plays to our advantage.

As for planting density, plant hostas about 1-4 feet apart. In the first year, the hostas won’t be able to cover all the empty space between them and some weeds will still sprout. But after a year, there won’t be any empty space left and everything will be fine.

On the other hand, planting hostas too densely can cause health problems. So if the hostas start to compete with each other, you need to move them apart. Replant them early in the season so that there will be some free space, which they will have taken up by midseason.

Read more: How much space do hostas need?

Herbicides are very powerful weed killers. So you can easily control all kinds of weeds without physical effort and with a minimum of time.

There is a downside to herbicides, which is that they can destroy your hostas. No matter what the manufacturers claim, herbicide is capable of damaging any plant.

For this reason, use herbicide very carefully, it must not get on any part of the hosta. It is best to spray weeds that are at least 1 foot away from the hosta. Set the sprayer to the lowest spray angle possible.

Spray the weed in a thin stream and that will be enough. If you need to work close to the hosta, use a piece of plywood to protect it from herbicide droplets. Spray only in calm, windless weather.

Use vinegar with caution

Vinegar is another powerful product against weeds. But it has the same disadvantage as herbicides, it can damage hosta leaves.

There is no way to remedy the situation because vinegar is an aggressive substance and burns the leaves immediately.

To avoid negative consequences, use vinegar in the same way as herbicides. You can read about this in the previous chapter.

In general, though, this is not the best way to control weeds near hostas.

And the final weed killer is corn gluten meal. Relatively recently, scientists have determined that this product is capable of preventing the germination of weed seeds. The great advantages of corn gluten meal are its organic origin and non-toxicity.

Sprinkle this product around your hostas in early spring before the weeds appear. This will greatly reduce the number of germinated seeds. However, you need to use corn gluten meal for several years to get the maximum effect.

Avoid using this product where you sow seeds of ornamental plants. Otherwise, they will not germinate as well as weed seeds.