Among conifers, Blue spruce and Norway spruce are the most famous and popular. And this is not surprising because, due to their characteristics, they differ from most plants.

These are different species of the genus Picea and have different areas of distribution. Blue spruce belongs to the species Picea pungens and is common in North America. It is also called Colorado spruce. Norway spruce belongs to the species Picea abies. It is native to Northern Europe and can also be found in the central and eastern parts of the continent. Another name is European spruce. 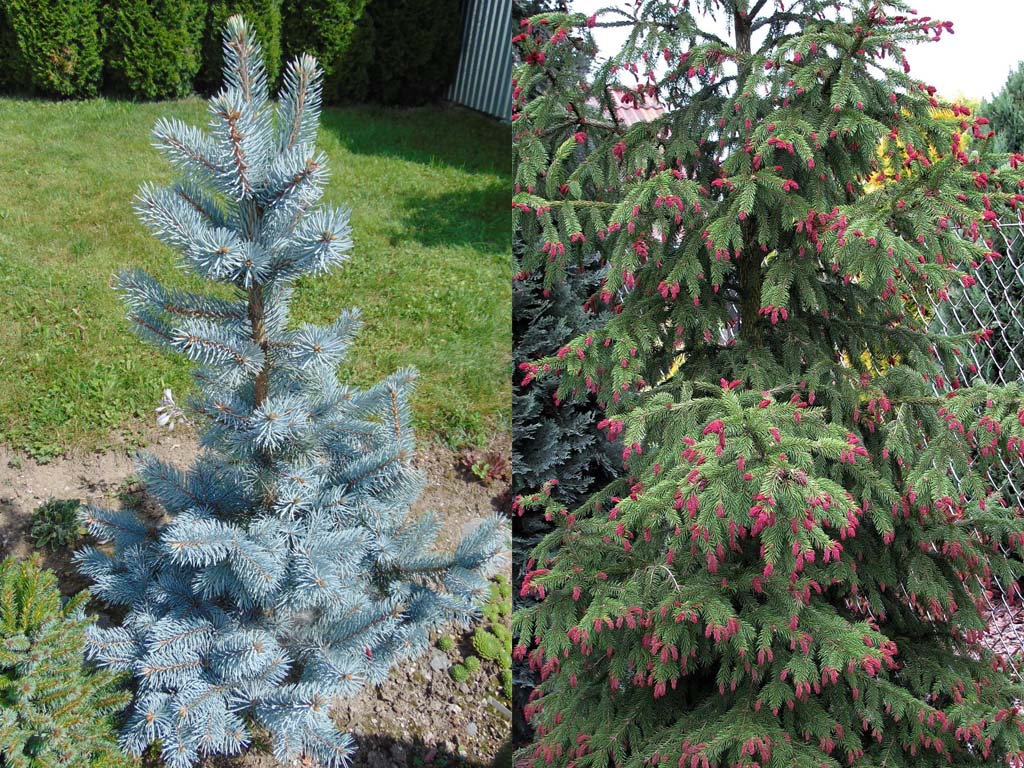 The needles of the Blue spruce are more ornamental

Blue spruce has lovely needles. This feature puts it above Norway spruce.

The needles of the blue spruce, in addition to the color we will talk about later, are longer and thicker (more succulent). These characteristics make the shoots on which they grow thicker and more voluminous in appearance.

The length of Colorado spruce needles is approximately 0.5-1 inches (1.5-2 cm). Thus, annual branches look great because the needles increase their diameter to 2-2.5 inches.

Although it depends on the variety, for example, the dwarf Picea pungens Glauca Compacta has needles 0.5-0.7 inches long. At the same time, the length of Hoopsii needles can exceed 1.5 inches.

Unfortunately, Norway spruce cannot boast of such a feature. Its needles are short and small. Also, they are often located horizontally rather than diametrically, as in Picea pungens. All this makes the branches thin and not so lush.

Another difference between the needles is that in the Blue Spruce, they are sharp. Norway spruce needles are also slightly sharp but do not compare to Picea pungens. In fact, needles of the last one can even hurt.

Is Blue better than green?

It is obvious that the blue spruce got its name because of the blue color of the needles. However, not all blue spruces are blue!

The seedlings are often green, just as many colorado spruces growing in the forest are also green.

Picea pungens is blue due to the waxy coating on the needles. But often, there is little or no wax, and the needles turn green. More precisely, light gray-green.

Norway spruce needles have a deep green (emerald) color. If Blue spruce didn’t have a waxy coating, it would look paler than Picea abies.

Seedlings of some varieties, such as Baby Blue Spruce, have a beautiful blue color. But in general, to get spruce with a deep blue color, you need to propagate varieties that have such a color.

The only way propagation through which color is transmitted is through grafting.

If we talk about the varieties of these two species, then not everything is so clear. Overall the Blue Spruce looks more decorative than the Norway spruce. But some varieties are simply unique, so it isn’t easy to judge who is better.

First of all, it should be noted Spring Ghost Blue Spruce. This is just fantastic spruce in which the young shoots are white; after ripening, they turn blue. This is a truly unique phenomenon. An analog of this variety is Picea pungens Bialobok.

Another variety that is worth noting is Ruby Teardrops Blue Spruce. This is dwarf spruce in which red cones are formed on the tips in the spring. The number of cones is quite large, and they contrast perfectly with the pastel blue young shoots.

Norway spruce is not far behind and has a variety of Rubra Spicata. Spring growths of this spruce have a bright red color. It looks fabulous until the twigs ripen and turn green.

Picea abies Gold Drift is a variety that has no analog among Blue spruces. He has a weeping form and green-yellow needles. The yellow color is very bright, and part of the green tree looks as if painted with yellow strokes.

From all this, I can conclude that the color range of these spruces’ varieties is broad, and they are in equal positions in this regard.

A large amount of direct sunlight gives the Blue Spruce the desired color. The waxy coating that makes this spruce blue is formed to protect it from excess sunlight. If the sun is little, then the wax will be little or not at all, and the color will be green.

For blue spruce to look good, it must receive at least 8-10 hours of direct sunlight.

In full shade, these plants will not only be green but may lose needles and branches. It is for this reason blue spruce is ill-suited as a screening plant. Because in this case, the spruce will overshadow each other and most likely lose the lower branches.

Blue spruce should grow at least 3 feet or more from other plants. Otherwise, it will not be healthy and beautiful.

The situation with Norway spruce is entirely different. This spruce also loves the sun, but unlike the previous one, it needs less sun; 6 hours will be enough.

Another feature of European spruce is that it can grow in the shade. However, this does not mean that the shadow should be very deep; it still needs at least filtered sunlight.

In general, Norway spruce has lower requirements for sunlight, so in this regard, it is easier to grow than Blue spruce.

Blue spruce is less energetic. In one year, it grows an average of 10-12 inches. Like European spruce, in nature, Picea pungens can grow by 20 inches per year. However, most ornamental varieties grow more slowly.

This information follows that if you need a plant to form a screen quickly, then Picea abies is better suited for this.

On the other hand, the Blue spruce looks better when grown as a specimen plant.

All this is true for the large varieties of these two spruces.

However, if we talk about varieties, then again, everything becomes more interesting. European spruce has a large number of dwarf varieties in its range, the annual growth of which does not exceed 1 inch (2.5 cm).

There are also semi-dwarf varieties with a growth rate of 2-5 inches per year.

With Colorado spruce, the situation is the same. If you wish, you can find fascinating miniature varieties of blue spruce that look like tiny hedgehogs.

These days, the number of ornamental varieties of these two species is just huge.

Thanks to shorter branches and longer needles, Blue spruce looks more lush and fuller. It is wonderful, even if it stands apart from other plants.

On the other hand, the European spruce is more elongated and looks slender. Often its branches hang down, and the main branches connecting with a trunk become noticeable. This does not mean that it is not beautiful, but it is not very suitable for those who like massiveness.

This disadvantage is easily compensated by the presence of many pyramidal and spherical (wide-conical) varieties of Norway spruce of different sizes.

The advantage of European spruce is that it is perfect for creating a hedge because it is shade-tolerant and grows quickly.