In this article, you will find a list of the pinkest azalea varieties. This kind of plant is very beautiful and very popular among homeowners. 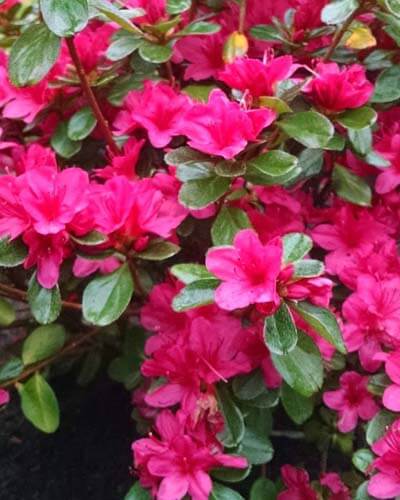 In springtime, summer, and autumn, the newest Bloom-A-Thon Hot Pink azalea adds a burst of color to your environment thanks to its bright pink flowers. In dappled sunlight and hot climes, Bloom-A-Thon azaleas thrive.

Once the may bloom on Bloom-A-Thon azaleas fades, give them a little all-over pruning for optimal rebloom. This fosters new shoots, which will produce the buds again for the second blooming.

In order to reduce the plant’s vulnerability to winter stress, don’t plant Bloom-A-Thon azaleas late in the year if you live in the cooler part of the variety’s hardiness zone. After mid-summer, don’t feed Bloom-A-Thon azaleas. If you want to keep your Bloom-A-Thon rebloomers at their best, you’ll want to apply a 2 inches thick layer of organic mulch. 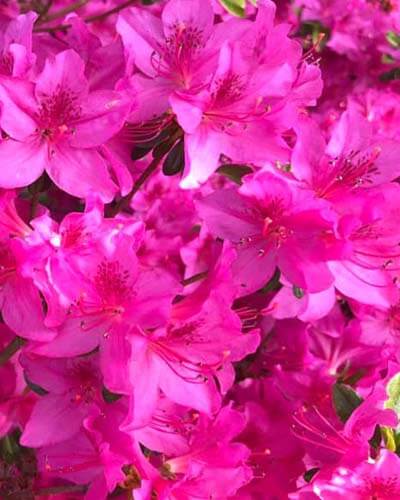 Tom Ranney of North Carolina State University, an internationally recognized authority in plant breeding, is the creator of this ground-breaking series. In the springtime, Perfecto Mundo Double Pink azaleas are filled with double pink blossoms, but after a little break, they begin flowering again in July and continue until the end of the season.

An insect that may be an issue in some locations is the lace bug. Can be grown in full or partial sunlight. 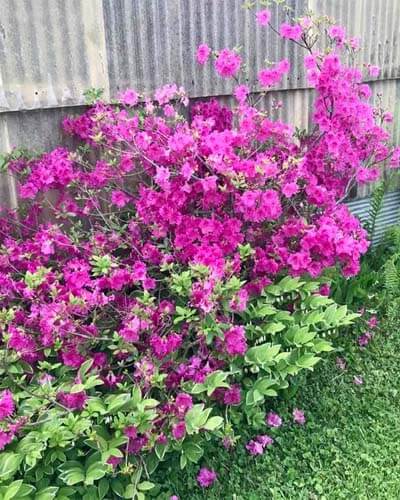 Pink is the perfect color for this outfit! Any garden will be brightened up by this vibrant Azalea. It’s part of a collection of Azaleas that re-bloom in numerous hues. For each re-bloom, these shrubs put on a stunning show.

An Azalea that’s cheery and small, FlorAmore Pink brightens up any garden. It’s ideal for the balcony, terrace, or garden because of its stunning display of lovely pink blossoms.

May and October provide a riot of color to the landscape with their exuberant flowers. It’s hardy in hot climates, everlasting, and a great shrub for margins.

With sufficient winter shelter, this plant may thrive in USDA hardiness zones 7-9. The mature plant grows to a height and width of 3 to 4 feet, preferring moderate shade. 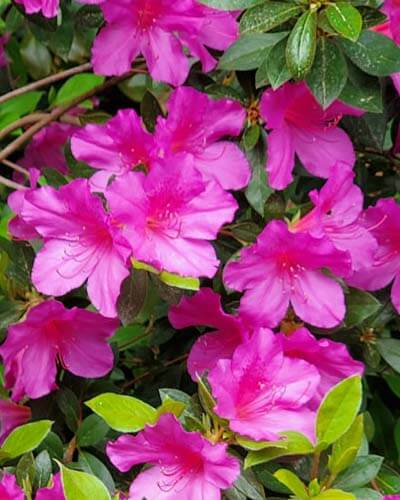 It’s perfect for group planting along fences, foundations, or as low border in the spring, but it requires a soil that is both well-drained and rich in acidity and organic matter in order to bear its stunning light pink flowers.

Beautiful pink bell blooms appear at the terminals of the twigs in early April before the leaves emerge. Gleaming evergreen leaves cover the tree’s branches and stems. There is no noticeable autumn color in the thin, shiny, thin leaves.

As a densely branched shrub with an erect habit, Hershey’s Pink Azalea is a favorite among gardeners. It may be distinguished from other varieties with smoother leaves by its gritty texture.

In order to prevent losing the current season’s blossoms, this bush must only be clipped once it has finished blooming. There aren’t any substantial drawbacks. 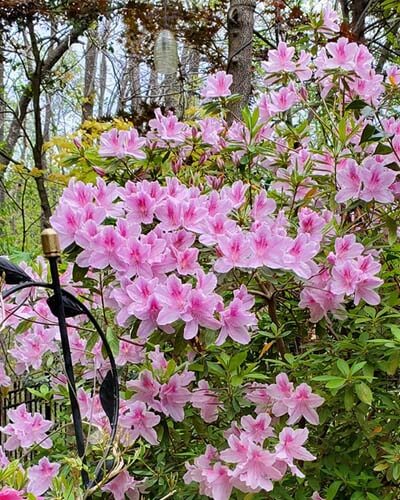 The pink-shell azalea is one of the earliest and most attractive native azaleas, with multitudes of pale pink bell-shaped blooms on branches that are leafless.

It is a perennial, irregularly rounded bush that may grow up to 8 feet tall and thrives in direct sunlight to partial shade in well-drained and acidic soils.

The landscape comes alive with color in the fall as the leaves changes from a vibrant green to a fiery orange and crimson. Rhododendron minus makes a wonderful companion plant for this plant in the garden.

Put in humus-rich, moist, well-drained soil in full sun or light shade for the greatest blooms. Specimens or groups may be used in a forest or native garden. In addition, it may be utilized as a foundation shrub. 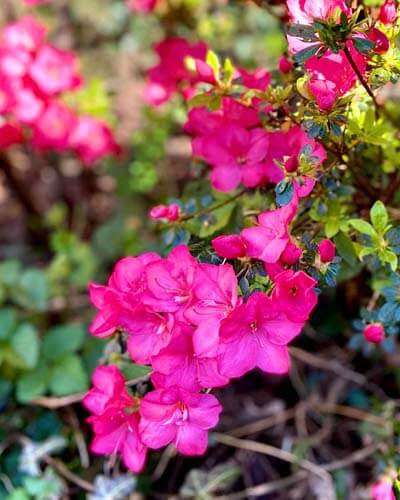 Leaves become reddish-orange in the winter on this evergreen shrub’s short, lustrous, deep green stems. Solitary, rich rose-pink spring flowers are a treat to look at and eat. Doing very well in the cold weather, it creates an attractive barrier or group planting.

Superb blooming in the front yard in early April. Add a splash of color to your mixed edges with this cheerful springtime bloom. Use to fill in the nooks and crannies of tree-lined curves.

Sideyards and patios in the South that get adequate light might consider this option. A key part of the Japanese garden that symbolizes springtime includes its beautiful blooming flowers. Solitary bold plant for enclosed outdoor areas is newly identified for contemporary architecture and is now available for purchase. 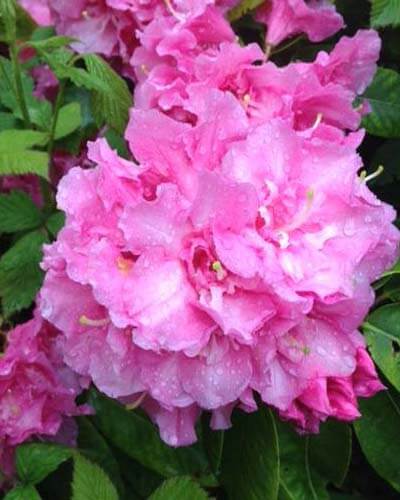 All through the springtime, Pink Ruffle’s blooms are spectacular, but the plant is also well-known for re-blooming in the autumn. Flowers have an air of formality and refinement about them. After a few weeks of development, the new leaf turns from a vibrant green to a more muted shade of green.

Known as a dwarf variation, the Pink Ruffle Azalea grows to 2-4 feet in height and 2-4 feet wide. As a result, it will not encroach on your landscape. 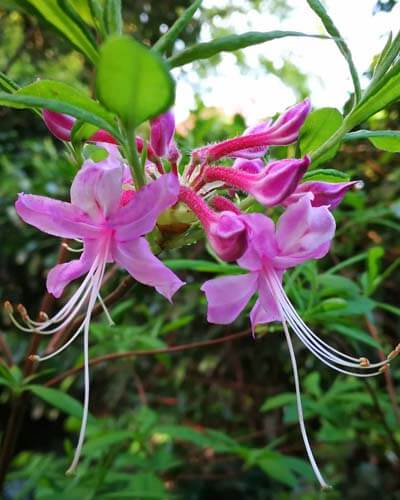 This shrub, which may grow up to 12 feet in height, is known for its beautiful horizontal spreading. Massive groups of funnel-shaped, pinkish or white, stamen-protruding blooms develop earlier or with the foliage.

During the autumn, the leaf of this deciduous tree becomes a drab yellow color. Having terminal groups of pink tubular vase-shaped blooms, this seasonal plant has a mild fragrance.

The flowers of this multi-stemmed shrub are very eye-catching. As long as the soil isn’t too dry, it may be used in wild bush gardens. 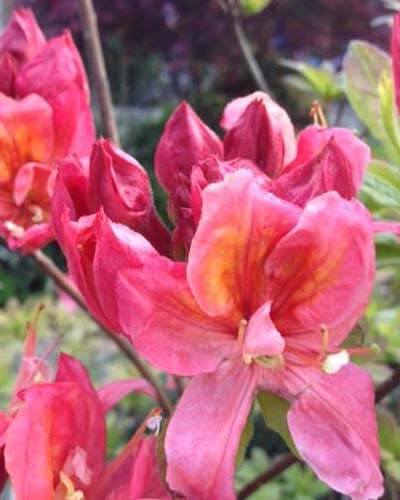 Beautiful pink bundles of flowers with an orangish “blotch” on each are provided by this tough, long-lasting variety. You may use the mounding shape and brilliant green leaves in hedge margins and perennial gardens, or as a stunning blooming basis plant.

All azalea hybrids belong to the Rhododendron genus, despite the fact that they are often referred to as azaleas. Traditionally, in the Japanese garden, azaleas and cherry blossoms have been associated with spring.

Excellent color in the springtime for gardens, hedges, and foundations. Add shrubs and trees along the perimeter of the property. 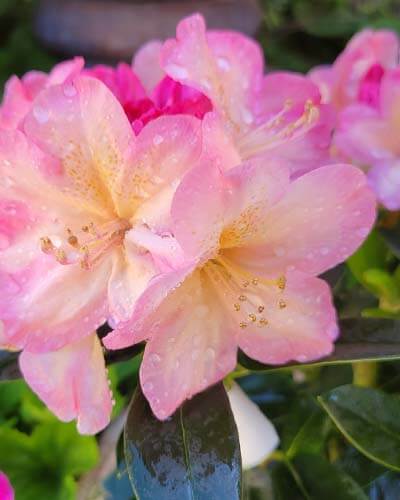 In late fall, this little perennial bush presents a stunning display of solitary pale pink blooms. Slender branches are covered with lush greenery. A great bonus to the environment.

Big pink lacy flowers of the Pink Gumpo Azalea are produced by a Satsuki. Dwarf azaleas like this one are great for flowerbeds and containers.

Despite its little stature, this azalea is an eye-catching groundcover. In addition to being evergreen, Pink Gumpo Azalea is easy to care for.

It’s a dwarf version. One to two feet tall and two to three feet broad, the Pink Gumpo azalea is a mature specimen. Corners, flower beds, and pots benefit greatly from the inclusion of Gumpo azaleas. 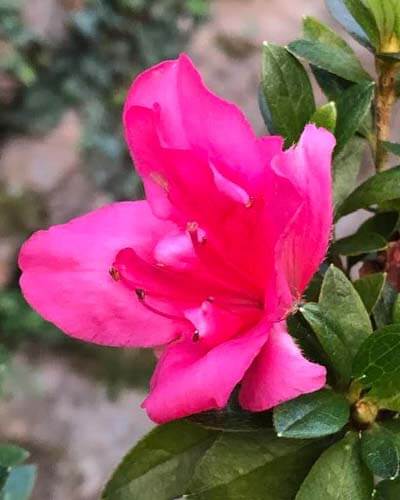 Blush pink flowers with a deeper pink splotch adorn this everlasting plant, making it a great option for massing in groups as an exquisite focal point in the yard.

Blossoms of pale pink trumpet-shaped blooms with a bright pink stain at the tips of the stems appear even before leaves on Blaauw’s Pink Azalea in the late spring. Gleaming evergreen leaves cover the tree’s branches and stems. The thin leaves don’t become very colorful as the season progresses.

Blaauw’s is a dense deciduous bush with a wide upright spread. It may be distinguished from other ornamental shrubs with finer leaf by its gritty texture.

Pruning should only be done after blooming to prevent losing any of the present season’s blossoms from the plant. 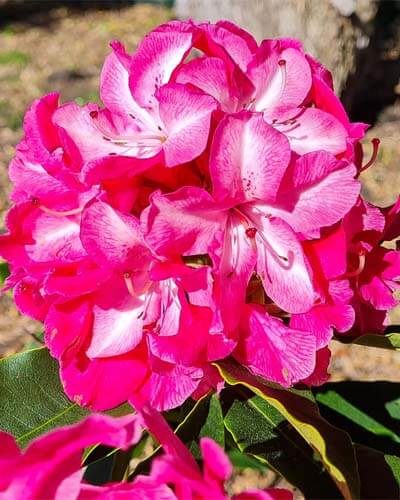 Azaleas are excellent for enhancing the beauty of your landscapes in the last days of spring. Azalea ‘Dwarf Pink’, a tiny, evergreen cultivar, is assured to provide a pleasant burst of color to the landscape towards the end of the spring-blooming bulbs.

The thick, rounded mound of deep green leaves offers a great background for the profusion of stunning pink blooms because of its compact growth shape.  Suitable for use in pots on the terrace and as a hedge plant. This plant has a  90 cm (36″) tall and  90cm (36″)wide.

Because the size of a plant can change based on the season, photographs of the plant’s introduction should be used solely as a guide. 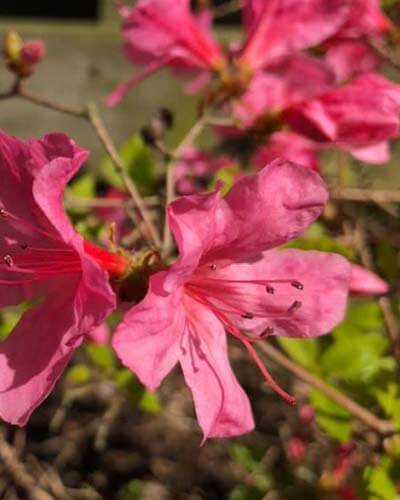 One of the most popular azaleas is the Geisha Pink Azalea. The shrub’s emerald leaves are present year-round before being accompanied by beautiful and tidy pink flowers in the later part of spring into summertime.

A maximum of 0.5 – 1 m tall and breadth is possible. The shrub’s sole year-round color is its evergreen leaf, which is a uniform dark green. When the weather becomes hotter, the blooms begin to turn a pinkish hue.

From March through May, Geisha Pink’s low, extending limbs are covered with clear pink blossoms. This everlasting Azalea creates a wonderful specimen shrub for flowing over rock gardens and over low walls. Once grown, it is low-maintenance and provides year color and shape to the landscape. 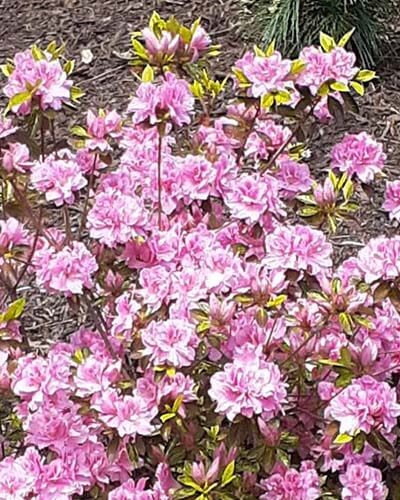 Ruffled pink blossoms adorn this profuse bloomer throughout springtime, midsummer, and autumn. In warm months, the lustrous foliage is bright green, but in autumn and winter, they become a rich purple.

The semi-double pink flowers of the Autumn Carnation entice pollinators. A deep purple color emerges from the dark green leaves as the season progresses. During the spring and autumn, the flowers bloom.

Suitable for use in pots on the patio, as a barrier, or in the shrub bed.

This cultivar’s growth habit is spherical and organically compact. Because of this, trimming is often not required with this easy-to-care cultivar. 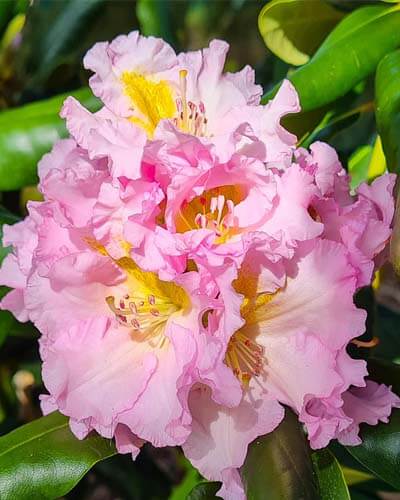 From springtime through October, these bloomers outdo themselves! There is an initial flush of flowers in the springtime, which is followed by a more subdued display in the summer until yet another round of blooms completely covers the once-amazing rebloomers.

The new meaning of “Blooming Power” may be found in a stunning hedgerow or even a tiny garden filled with these stunning blooms.

Big, solitary pink flowers on a wide, extending bush of up to 2 feet in height and 3 feet across are the hallmark of the Blush Azalea, a newer everlasting azalea that has just recently been introduced.

It bursts into bloom in the springtime and then continues to bloom throughout the summer and fall, adding beauty to your landscape for months, not weeks.

Make sure to put it near the front of the beds, along a walk, under trees, or in an area that is secluded, such as a forest garden. This magnificent evergreen shrub will wow you with its stunning display of blooms. 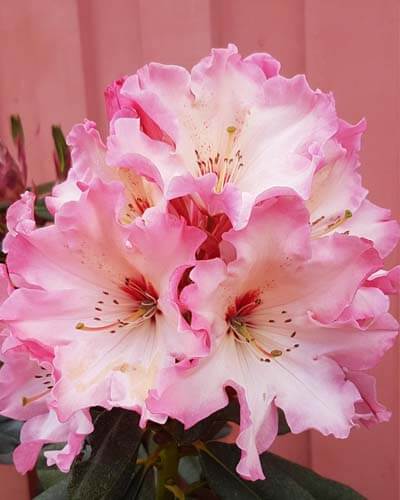 More than twenty blooms in dome-shaped bunches of around 20 apricot-cream and pink flowers with little red spots on the backs of the petals.

Pink, creamy, and orange blossoms are stunning, and the new shoots appear a rich bronze before becoming emerald as it matures.

It’s a stunning specimen of a plant! Due to the difficulties in spreading it, it is hard to come by. Only a handful of these plants are left at our nursery, so if you’d want to get your hands on one, hurry.