Almost everyone remembers the spring scent of lilacs, which reminds him of childhood. And indeed, these beautiful plants are widespread in horticulture.

These days you can find a large number of varieties of lilac. However, the most popular are dwarf (bush) varieties.

Miss Kim is one of the first dwarf cultivars. It was originated in UNH from seeds imported from South Korea (Seoul). All this happened in the 50s of the last century.

The official name of this variety is Syringa pubescens ssp. patula ‘Miss Kim.’ You can also find another name for this variety – Manchurian Lilac.

The second, but no less popular small variety is Dwarf Korean Lilac. Frank Meyer brought this variety from China in the early 20th century. Since then, it has become an extremely common flowering tree in the United States.

Syringa meyeri ‘Palibin’ is the official name of Dwarf Korean Lilac. As the name implies, these two varieties belong to different species and must have some differences. So it is, and let’s look at the differences in detail. 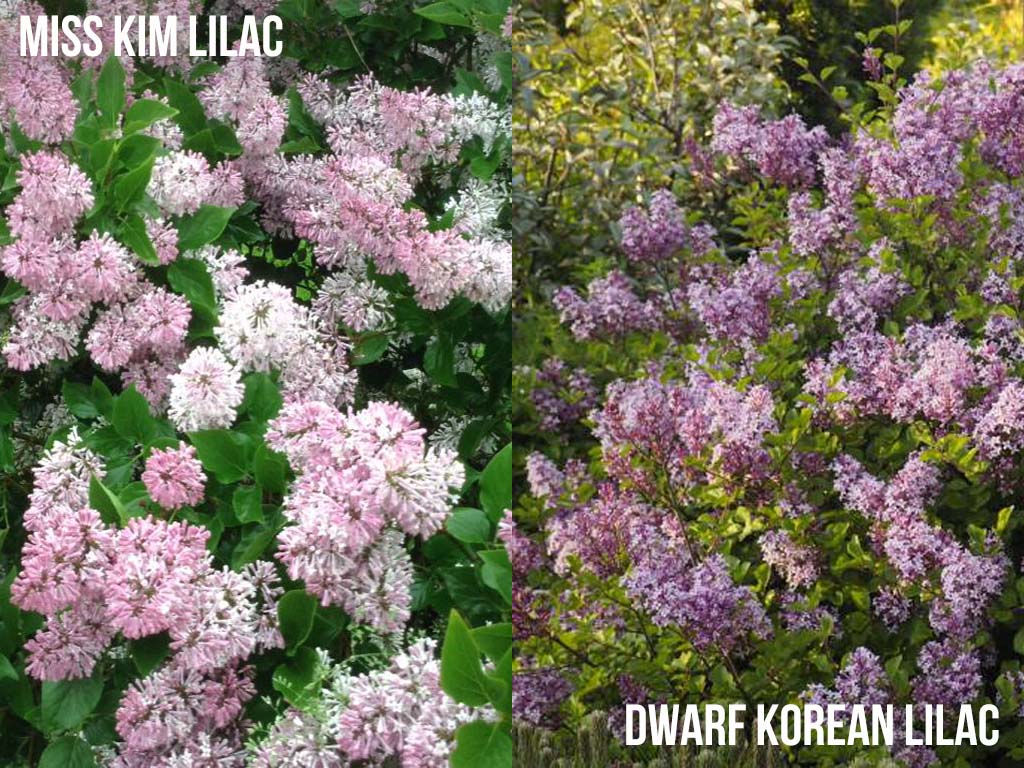 Growth habit is also a little different. Miss Kim’s height is the same as the width, which means she has a spherical shape. On the other hand, Dwarf Korean Lilac is wider than taller, so it has a slightly flattened shape.

Besides, the growth rate of these lilacs is not the same. Miss Kim is growing faster; her annual growth is 10 inches (25 cm). At the same time, Dwarf Korean Lilac grows 7 inches per year (18 cm).

So Miss Kim needs a little more space than Dwarf Korean Lilac. However, with pruning, you can control the size of both of these lilacs.

The next significant difference is flowering.

Dwarf Korean Lilac blooms earlier than Miss Kim. Flowering may begin in early or mid-May, depending on climate and weather.

Early flowering can be both an advantage and a disadvantage. You can get pretty flowers in your yard faster, but late frosts can damage them. In 3-4 hardiness zones, late frosts can occur in late April or early May.

On the other hand, Miss Kim usually blooms no earlier than the second half of May, which allows avoiding late frosts. On average, Miss Kim blooms two weeks later than Dwarf Korean Lilac.

Also, Dwarf Korean Lilac has a greater tendency to re-bloom. If you remove the old inflorescences and provide proper conditions, this lilac can bloom again in the second half of summer. However, this does not mean that Dwarf Korean Lilac reblooms for sure.

Miss Kim rarely rebloom; it’s the exception rather than the rule.

The leaves are also not the same

The shape and size of the leaves of today’s two lilacs are different.

Miss Kim has leaves larger than Dwarf Korean Lilac. Their length can reach 1.5 inches (3.7 cm) and a width of about one inch.

Due to the proportions of width and length, the leaves of Miss Kim are elongated. Also, they are slightly twisted and shiny, which adds some decorative value.

Dwarf Korean Lilac has smaller leaves and their size does not exceed 1 inch. This variety’s peculiarity is that the leaves are rounded and have almost no sharp tips, which distinguishes them from most lilacs.

From all this, we can conclude that both of these varieties have beautiful leaves in their own way. Due to the larger size of the leaves, the Miss Kim bush looks lusher. In comparison, the Dwarf Korean Lilac leaf is more refined with a detailed look at it.

Miss Kim was a little more tolerant of the hot climate. It can be grown from 3 to 8 hardiness zone.

While Dwarf Korean Lilac is recommended to grow in 3-7 zones, this means that it is not available to zone 8 gardeners.

Of course, it’s not a big advantage for Miss Kim, but it tolerates the heat better than its competitor.

Despite the differences, these two lilacs have much in common.

Both of these varieties can tolerate different soil types. But it is best if you plant them in nutritious and drained soil. To achieve such soil qualities, you need to add organic matter to your garden soil.

Do not forget about watering. In dry weather, water the lilac at least once a week. Lilac that has not yet taken root in a new place needs watering the most.

Mulch the surface around the plant with a layer of mulch 2 inches thick. Mulching material should not touch the trunk.

It is almost not necessary to prune these plants. However, sometimes some branches may protrude beyond the desired shape. Shorten them, but do it as soon as the flowers fade. Otherwise, you can damage the new flower buds.

Also, spray the lilac annually with a fungicide and insecticide to avoid disease and pest damage.

There are many other good dwarf varieties of lilac on the market.

One of the best is the Red Pixie Lilac. It is also a compact variety that grows up to 4 feet in height. It has beautiful purple flowers, and the number of inflorescences is greater than today’s two.

The next good alternative is Bloomerang Lilac. It has more massive and more lush inflorescences but a compact size (5 feet high). This variety is perfect for growing almost all over the United States.