Despite belonging to the philodendron genus, Lemon Lime and Moonlight have many fundamental differences. But at the same time, they have a lot in common, so the comparison of these two remarkable plants is completely logical. It is important not to make a mistake and choose the best plant from the many available.

Lemon Lime Philodendron needs to be trimmed regularly because it is constantly growing in height. Moonlight, on the other hand, needs almost no pruning. Lemon Lime also needs support to climb upwards, which is not the case with Moonlight.

Lemon Lime came to us from a laboratory in China, where it was found as a spontaneous mutation among a large number of Philodendron domesticum. Because of its bright foliage, it has taken up residence in many homes of tropical plant lovers.

Little is known about the origin of Moonlight. But it can be assumed that it is a hybrid philodendron that also has many advantages and the history of its origin is not particularly important. 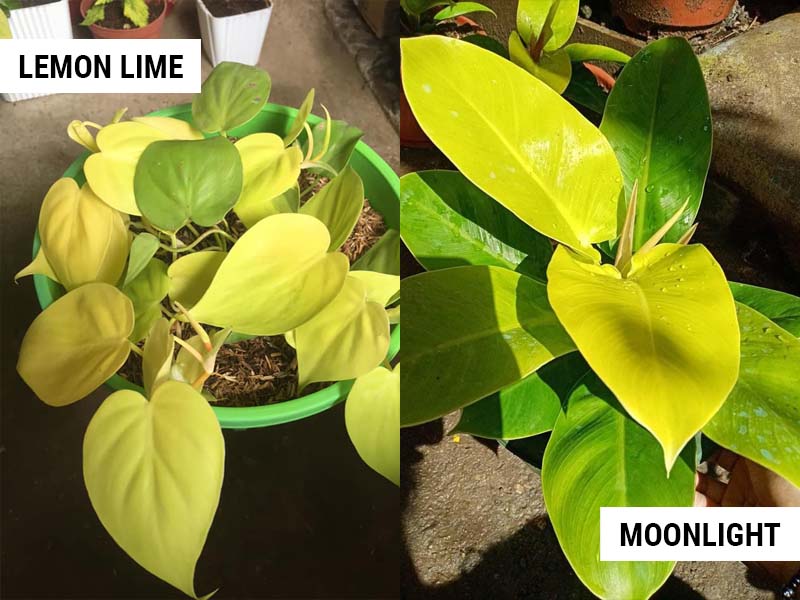 Lemon Lime is a vine and Moonlight is a bush

The first thing that distinguishes Lemon Lime from Moonlight is the growth habit.

Lemon Lime has the classic philodendron climbing habit. In the rainforests of South America, these plants cling to the bark of large trees and grow upward and only slightly wide.

Moonlight on the other hand is a self-heading philodendron. This means that its central stem is short, lengthening only slightly each year. It has longer leaf stalks, which will sag under the weight of the leaves, resulting in a broader shrub.

From all this, it follows that Moonlight is bushy and Lemon Lime is a vine.

Lemon Lime has a slight disadvantage in terms of growth habits. It needs support to climb on while its competitor does not. Also, you will need to shorten it from time to time, because in nature these plants grow quite long, but we will talk about that later.

Their color palette is different. Yes, they are all shades of green and yellow, but still.

The young leaves of Lemon Lime appear yellow with a slight pink tinge, and this, by the way, is characteristic of many yellow-leaved plants. After a while, the color changes to lemon yellow. When the leaf is fully mature, it will change to lime green but the brightness will be weaker than that of the competitor.

At the same time, Moonlight also has bright yellow young leaves but without a pink hue. As it matures, it turns a darker green. The brightness of the color is very high and does not change over time.

To conclude this chapter, they both have lovely young, bright yellow foliage. As they mature, Lemon Lime turns light lime and Moonlight turns bright green. It’s hard to judge which one is better in this regard, but I like the brightness of Moonlight better.

The size and shape of the leaves are the third distinctive feature of our plants.

Lemon Lime has leaf 6-8 inches long and 5-6 inches wide. The leaf petioles are short and attached to a long stem. Because of the length to width ratio, they are more rounded and the heart shape is more prominent.

Lemon Lime also has a slightly larger number of leaves than its competitor.

Moonlight on the other side has a leaf that is 10 inches long and about 5 inches wide. The narrow leaves are attached to long petioles, which as a result makes them even visually longer.

On the whole, the large and long blades of Moonlight leaves look more solid and unusual than the medium-sized Lemon Lime leaves on the climbing vine.

They need different types of pruning

The pruning of our two philodendrons differs slightly due to their different growth habits.

Lemon Lime grows like a vine so it can climb quite high. In order to keep the plant compact so you don’t have to continually increase the size of the support, you can shorten it. The best time to do this is in the spring. Make the cuts just above the leaf node.

The tool should be sharp and sterile to avoid infection. For the same reason, wounds should be kept clean; the sooner they dry the better. It is a good idea to treat wounds with hydrogen peroxide.

Moonlight increases in height quite slowly so it does not need to be shortened. The only type of pruning is prophylactic. You need to remove old leaves from the bottom of the plant from time to time. This encourages more vigorous growth of new leaves. Also, remove diseased and yellowed leaves immediately as soon as they appear.

Now let’s talk about what these two plants have in common.

First of all, it concerns their maintenance. There are minor differences here, but in general, they are similar in their growing requirements.

This chapter is no less important than the previous ones because the wrong maintenance can lead to negative consequences and you may be disappointed in your choice.

Indirect light is the best

Although philodendrons spend their entire lives in the shade of large trees, this does not mean they do not need light. The best option for them is indirect but very bright sunlight. Only in a northern room can you place these plants in front of a window, in all other cases they should stand to the left or right of the window.

Direct sunlight will burn the leaves of the philodendron, so never place them in the sun.

They also grow well in medium light (at the back of the room) but in this case, the color of the leaves may be less vivid. Many aroid hobbyists grow them in a dark corner of the room under artificial light and get good results.

It is well known that philodendrons like heat because their habitat is the tropics. The same is true for our current varieties. You need to produce the same temperature as in their homeland.

The ideal temperature is 70-75 °F. A few degrees higher or lower is also good. But what you have to avoid is cold, because then the plant will slow down or even suffer.

The same applies to extreme heat. If the temperatures are too high and the plant is not properly watered, it may go into stagnation.

Humidity is another important aspect that unites these two plants. In general, they can tolerate normal room humidity. But you should not place them close to objects that produce heat.

To get the best results they need a humidity of about 70%. The leaves will then be larger and the plant will look healthier.

In the heat of summer with low humidity, dry spots can sometimes appear on the leaves. Regular spraying with water will help to solve the problem.

On average, you should water philodendrons once a week. Or you can check the soil moisture and if it is more than half dry, it is time to give the plants water.

In summer, water more frequently, but do not do it more than twice a week. The closer you get to winter, the less often you need to water. In winter, once every 10 days is usually sufficient.

You should avoid overwatering the plants since you can get yellowed philodendron leaves. In the worst case, it may die.

The soil must be well-drained and loose. This is due to the fact that the roots of these plants grow mainly in the upper layer of soil. In addition, some part of the root system is above ground level.

The best substrate is potting soil mixed halfway with quality compost. Some owners of aroids grow philodendrons in bark, but then they require a special watering schedule.

An ordinary succulent soil mix also works well as a substrate. Or you can buy a special substrate for philodendrons.

Because of their fast growth and large leaves, both of these varieties need regular feeding. The usual schedule is to fertilize once a month during the period of vigorous growth. In autumn feeding should be halved and stopped completely in winter.

You can use various products as fertilizer. Watering philodendrons with liquid fertilizer is best. You can find a special fertilizer for this type of plant on the market or use a fertilizer with the all-purpose NPK formula.

Indoors philodendrons are usually disease-free, but it can still happen occasionally. First of all, when you give too much water to the plants or the air circulation around them is poor, brown spots can appear on the leaves. In this case, you need to spray the plant with a fungicide.

As for pests, they damage philodendrons more often than diseases because they can move around much better. Most often you will see aphids or spider mites on the leaves. The former can be handled with horticultural oil or insecticide. Against the mites, you should use leaf moistening and acaricide spraying.

Both of these varieties, like most philodendrons, are considered toxic plants. Irritation or painful symptoms may occur if some of the plants come into contact with the mouth or mucous membranes.

If ingested, these plants may cause nausea or vomiting. In this case, you should see a doctor.

If you have children or pets in the house, you need to keep an eye on them. Place philodendrons out of their reach.